Well I certainly hope I didn't get into something that will be too difficult to maintain or finish – a curb appeal project.

The beginning of this week we inherited a few peony plants.  I'd been telling the wife that a fall project was going to be making a flower bed along the road and driveway.  Well, with the plants given to us, I had to quickly put them in the ground Sunday evening.

Monday I started early on the project – and started digging out the grass.  The flower bed will be two feet wide and will span the entire length of the road and driveway – about 60 feet in total.  Today I just finally finished up getting the grass all taken out. 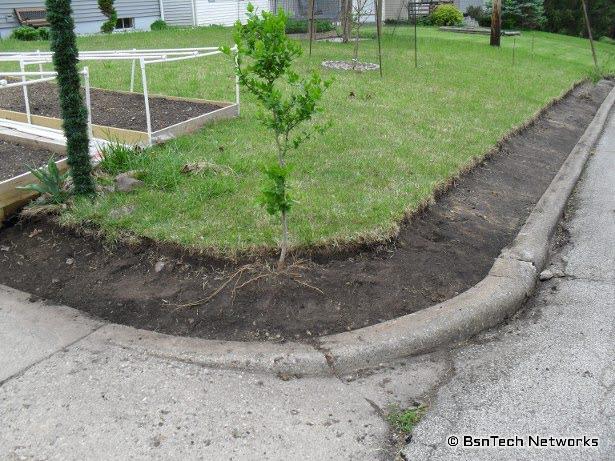 The curb looks much better with the grass taken out – but the big black strip of ground looks horrible.

In order to keep the grass from creeping back in, I needed to come up with an idea to keep it out.  It has been said that you need to dig down at least six inches into the ground to keep the zoysia grass from  creeping in with its rhizomes.  The plan originally was to build a concrete wall.. wow would that have been a lot of work!  I needed some way – with no seams where the grass could penetrate – to hold the grass back.  Landscaping fabric and plastic simply doesn't work because the rhizomes will poke right through it over time.

I'm not sure what we are going to do with the area – because the plan is to put in daffodil and tulip bulbs in the area – and then other plants that really require no maintenance.  So it may unfortunately look bare for the rest of the year.

Now what s going on in the garden!

First off – the Granny Smith apple tree is doing OK.  I think that the deer still got to the bottom of the tree (somehow) even with netting around it.  But the top of the tree is doing well – and there are actually little apples starting!  Unfortunately, the branches just won't support these apples so they will have to be snipped off. 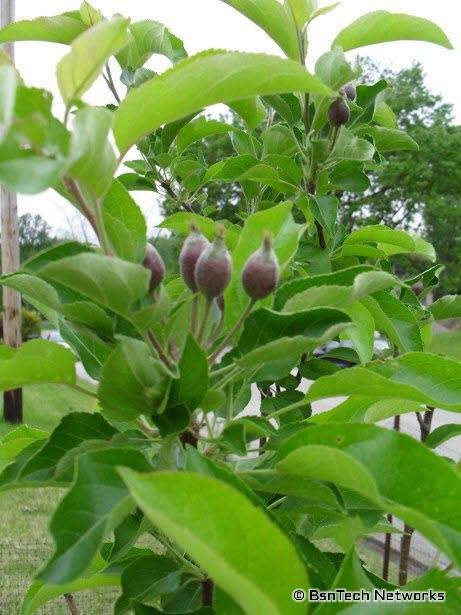 The Tri-Star strawberry plants are doing well.  Here is one with a few strawberries that are beginning to turn red. 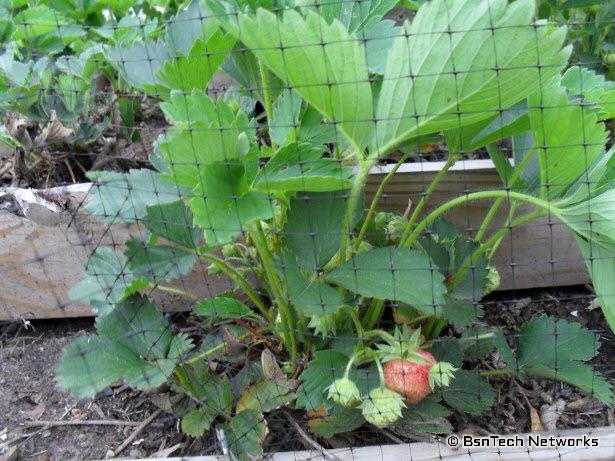 Last week we had a storm that brought in pea-size hail.  It did some damage to the onions, lettuce, and broccoli.  The broccoli had rips through the leaves.  They are still doing well though.  Today it is very windy – seems there are gusts around 35 – 40 mph – so below the broccol look lke they are being pushed over. 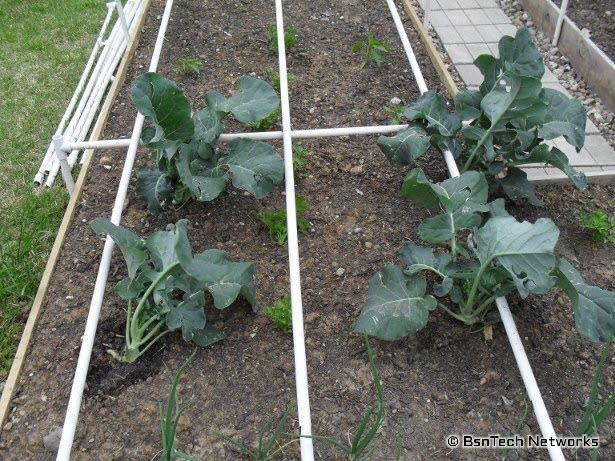 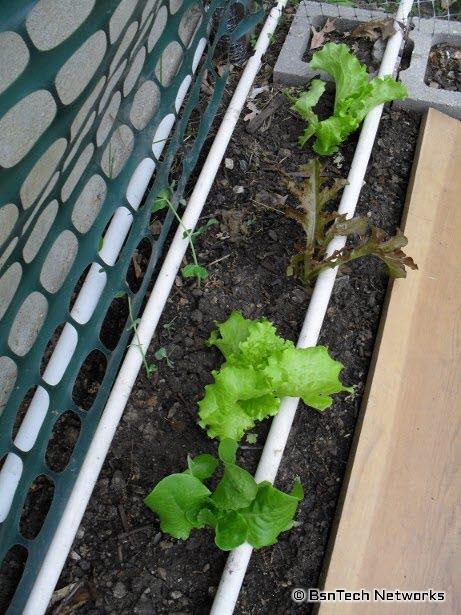 Notice the green fencing by the lettuce?  Well, originally this was used to keep the deer our of the back garden – but this year it was used to hold peas up.  I do not recommend this kind of fencing for pea support.  The peas simply cannot grasp onto the fencing very well with their tendrils.  I was really hoping I wouldn't have to buy more fencing – but it looks like I'll have to get some chicken wire next year.

Here are the other peas that have the chicken wire fencing.  The tomatoes are in front and are doing very well. 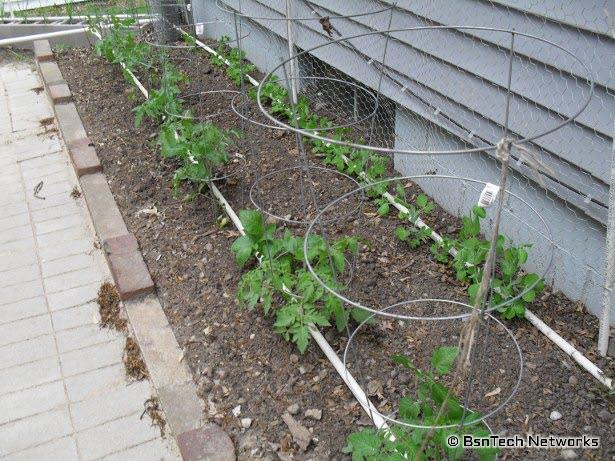 The carrots are growing well in their little driveway garden.  Not really much else to say about them. 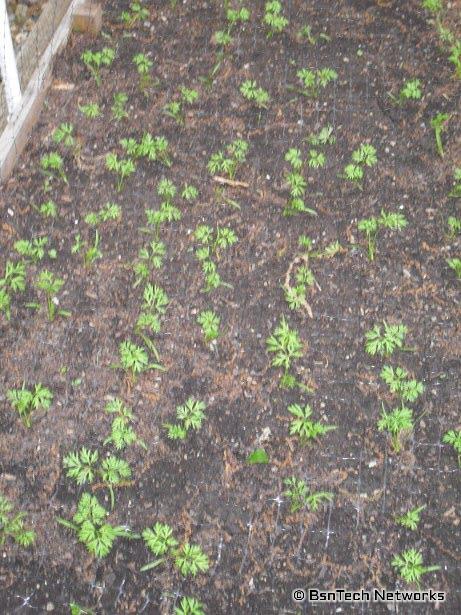 Last Saturday the herbs were planted – basil, cilantro, oregano, and parsley.  The basil seeds were quite small – but the oregano seed was even worse!  The oregano seed was about twice the size of a grain of sand – extremely small and it made it very hard to plant.

While you can't see it here, the basil has sprouted in a matter of five days.  About 11 of the 32 seeds planted (two seeds per 16 holes) have come up so far.  Nothing else has poked its head through though.  I'm using clothes pins to mark where they were planted since I didn't have enough toothpicks!  Between the herbs (since they were planted on either side of the bed), I plan to put in some green beans after the herbs get on their way. 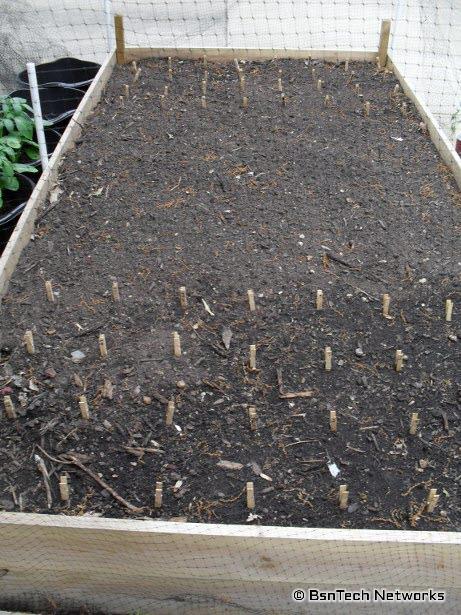 A quick glance of the whole garden behind the garage.  You can see the peas struggling with the fence and the potatoes coming up well.  The onions are harder to see but they are on the right side of the photo. 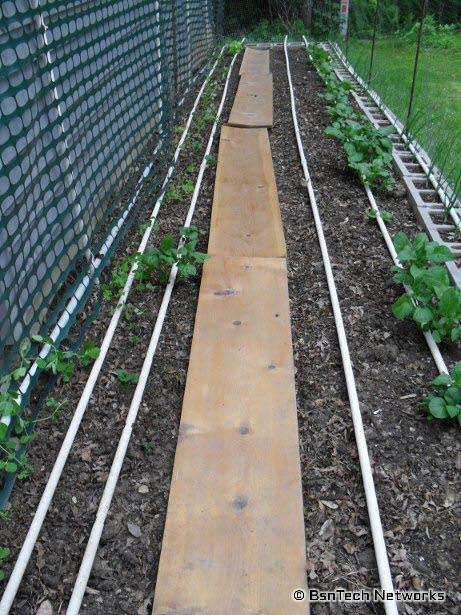 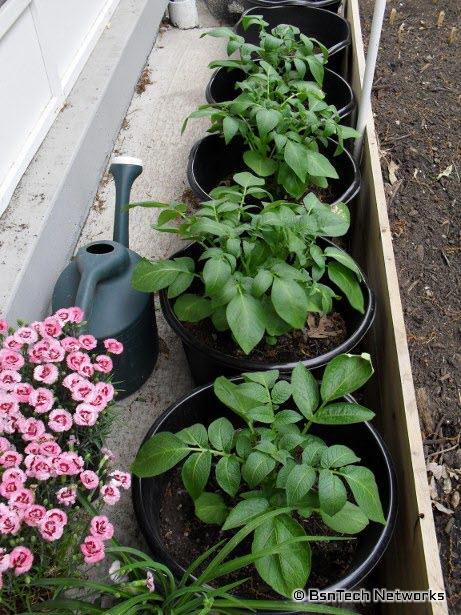 Well that is all for this week's garden update.