This morning I started making my rounds around the garden before it got too hot.  It is over 92 degrees outside now!

We haven’t had any rain in a few days (going to possibly get more tomorrow) so I turned the irrigation system on to the front garden and the garden beside the house.  The garden behind the garage was still soaked with water since it doesn’t appear to drain as well.

After doing that, I had to manually water the potatoes in the buckets next to the house since they don’t get any rain under the house overhang.  Same with the onions in the front yard and some flowers in containers.

I looked at the apple tree and I made the decision to remove most of the apples.  The apples were getting larger and it was pulling the branches down.  I didn’t want any more permanent damage done to the tree if it doesn’t need it. 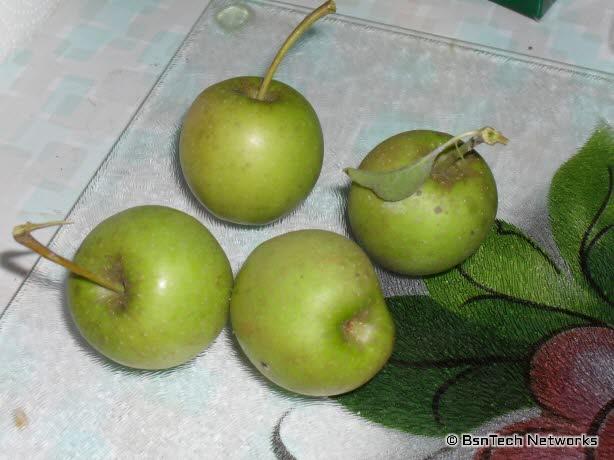 Kind of a shame – but they went into the trash.  Especially being Granny Smith apples, they are already sour – but since they were picked very early, they would be extremely sour.

After this, I picked a few peas; just four ounces worth.  The peas have just a few flowers left on them but most of them are just the vines without any peas.  This year it just turned too hot very quickly so the cool-weather crops suffered – like the peas and lettuce. 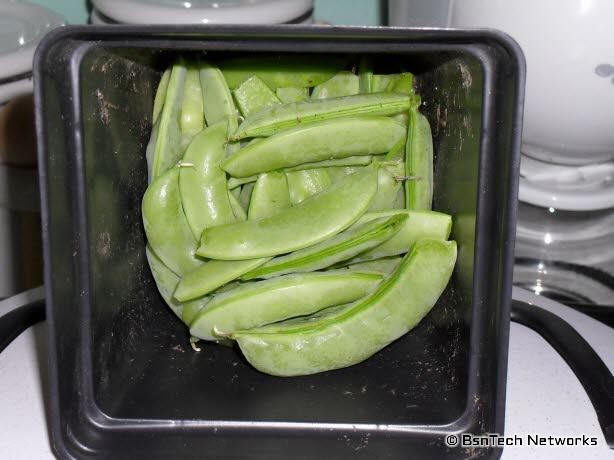 Next – time to pick the cilantro!  The cilantro has already began to bolt!  What does bolting mean?  Well, it means that the center stalk of the plant begins to grow exceptionally high compared to the rest of the plant and this is where the the flowers and seeds are formed.  Here is the cilantro plants bolting. 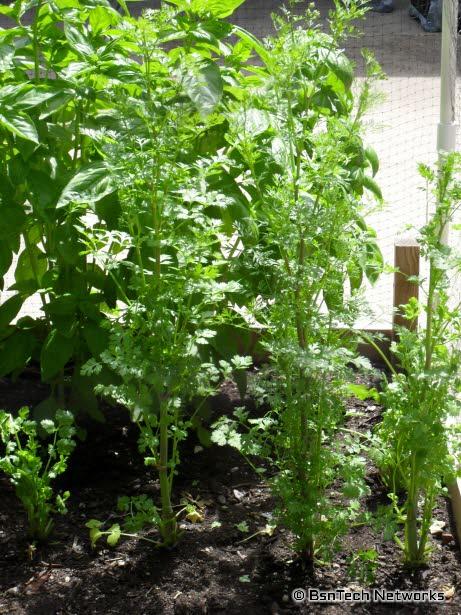 There are three in the above picture to the right and one small cilantro plant to the left.  You can see the difference in height versus the plants.

There isn’t much below the cilantro plants because they were harvested today – got about 10 ounces of leaves/stems from them.  Cilantro has a very soapy smell – and it tastes like soap too.  Not sure why it is so popular, but it is added to salsa.  This is what the goal was for this year – but the cilantro has pretty much finished up before the tomatoes have even ripened.  Below shows all of the harvested cilantro. 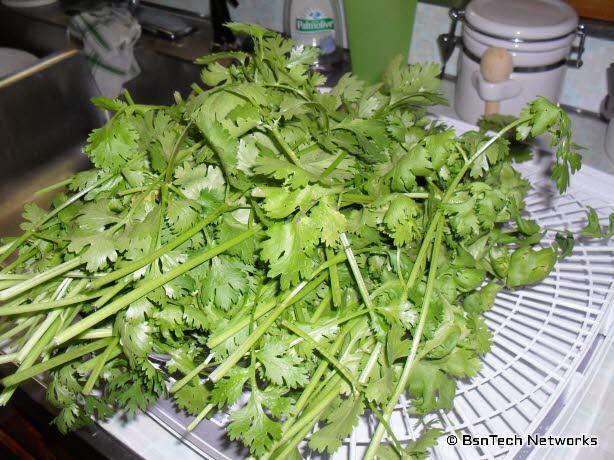 As I read other places, cilantro does have a large tap root.  This is why it does not transplant well.  It almost looks like a carrot.  The tap root looks to be just as long as the bed on the driveway was deep. 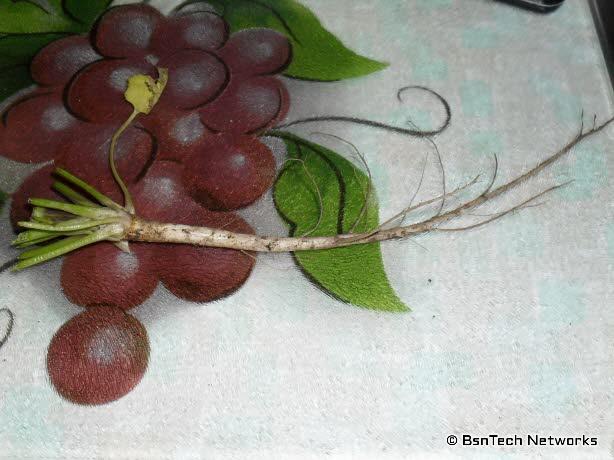 I didn’t want to put the cilantro in the dehydrator because of how long it took the basil last time.  So I took the stems and put them in bundles and tied them with a rubber band. 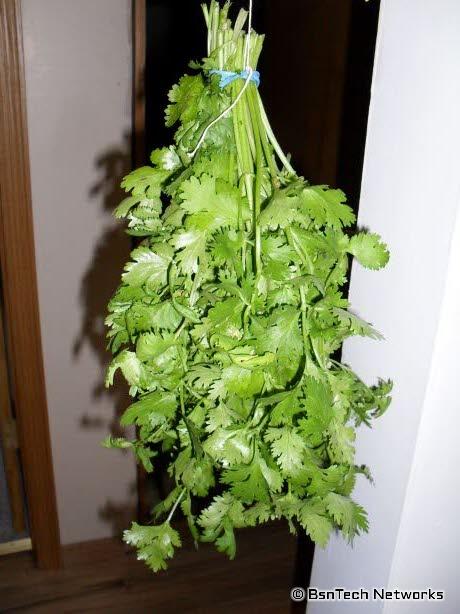 I had three of these bundles.  So I tied each of the bundles together and then hung them upside down from a small hook we have between the kitchen and the hallway.  This will allow them to dry.  Once they get closer to getting dried, I’ll take them down and might put them in the dehydrator for a bit. 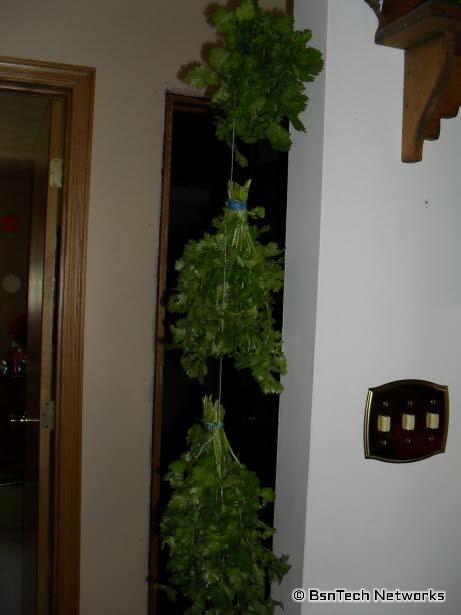 Alright.  All done with the cilantro-talk now.

I did use the dehydrator one other time this week – and that was to try dehydrating strawberries.  I wasn’t sure what they would be used for, but it was a bit of an experiment and to just use some of the strawberries we’ve been picking lately.  We picked four pounds at the beginning of this week. 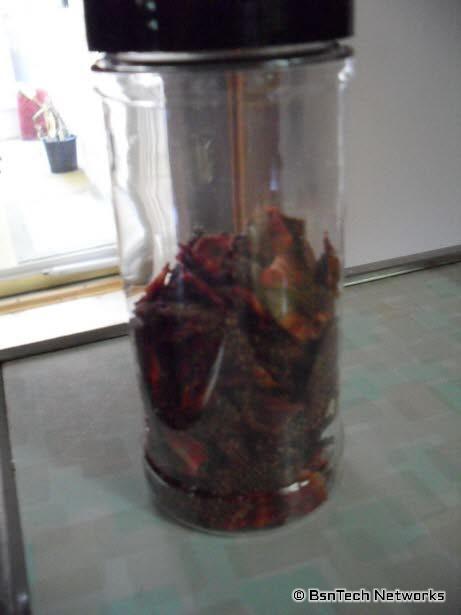 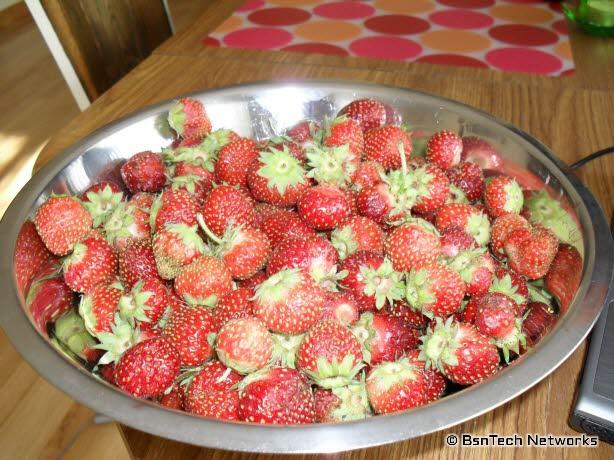 Moving on to the next produce for the day – more basil leaves.  First, here are the basil plants before the leaves were picked. 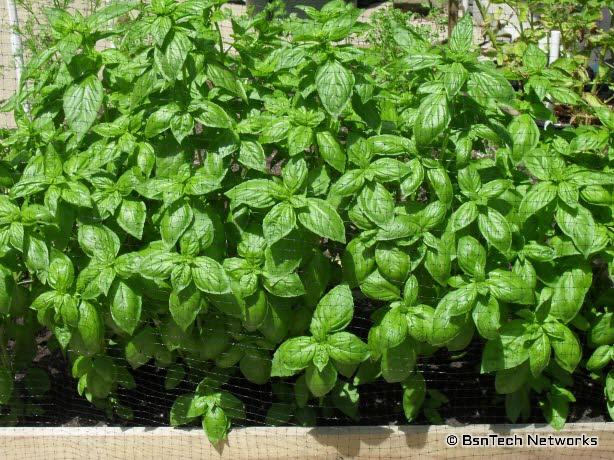 Here is all of the leaves that were picked – amounted to around four ounces worth.  It took a good 20 minutes to go through the 15 basil plants and pick out the largest leaves again.  By choosing the largest leaves, you get ‘more bang for your buck’ when you pick them.  It also helps to open the ‘canopy’ and allow the sunlight to get to the other leaves that still need to grow a bit more. 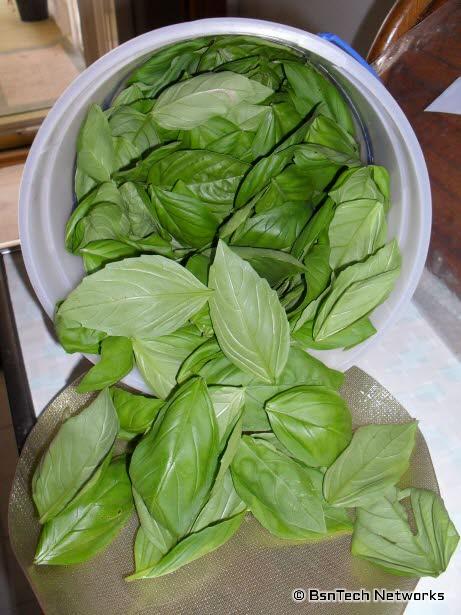 This time I plan to leave the basil leaves out for a bit and then I might put them on the dehydrator – if they can be done in a day.  Last time it was way too much to let the dehydrator run for two days.

Now with all of the produce out of the way that was picked today, lets go on the garden tour again.

The usual side garden pictures.  Potatoes are in the bottom of the picture and all of the tomatoes are behind the TV antenna tower. 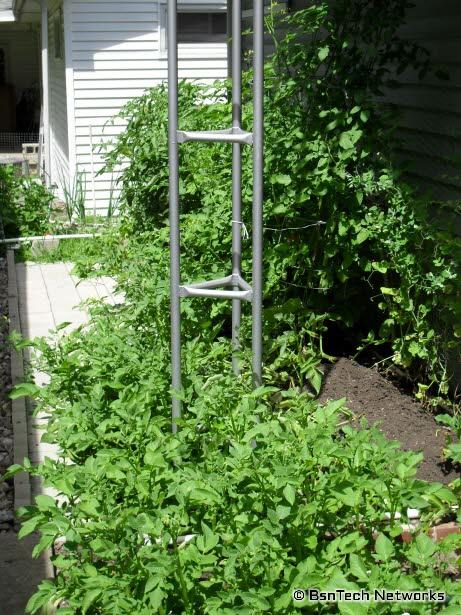 This sole plant is the Red Cherry tomato plant.  There are a few small cherry tomatoes that are yellow and just starting to ripen up.  This plant is now at the top of the THIRD tomato cage that I stacked.  Therefore, this plant is now well over my head – about seven to eight feet tall. 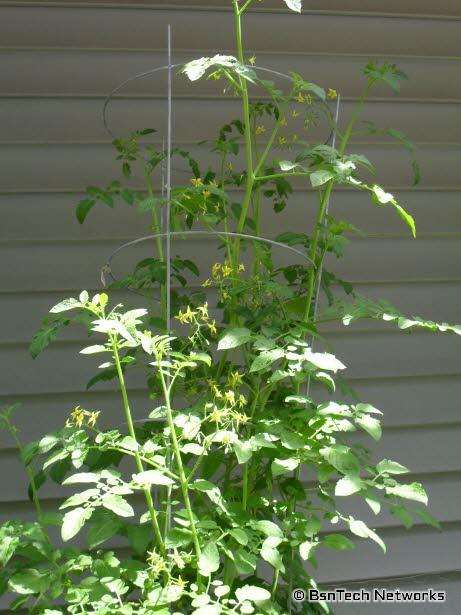 And the other tomato plants – one is a Roma tomato and the other five are Best Boy tomatoes.  Can’t really tell how many are planted here because they have all grown together. 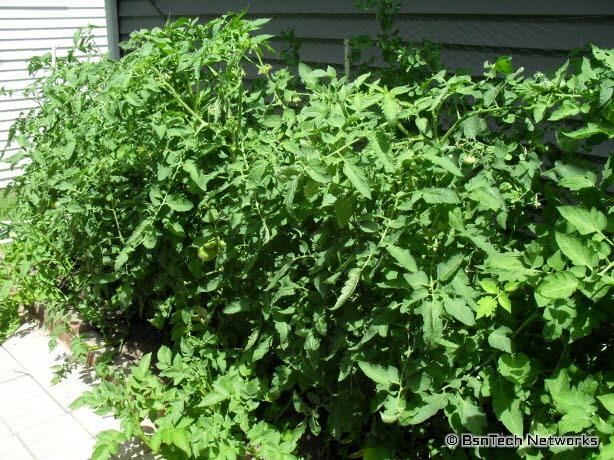 Moving on to the back garden.  It doesn’t seem like too much is happening back here.  But this is where I am getting most of the peas – from the Sugar Snap pea plants.  The cucumbers were also planted back here as well and they are taking off.  Most all you see below is Kennebec potatoes covering everything.  There are some Greencrop green bean plants that are hidden under all of those potatoes unfortunately. 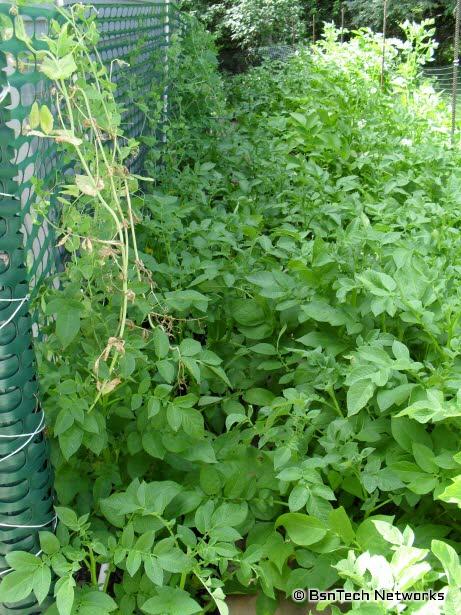 Here are the two largest cucumber plants.  This one has a nice bloom on it already and it is the Burpee Pickler cucumber plant.  I planted three of these. 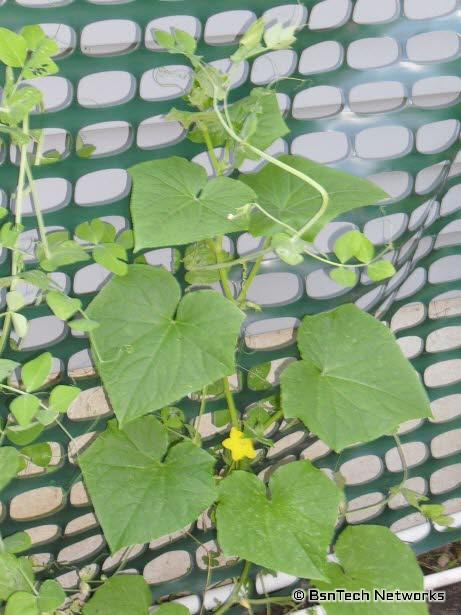 Next is the cucumber plant that has grown to the top of the four-foot fence already.  This is the Straight Eight cucumber.  Also planted three of these. 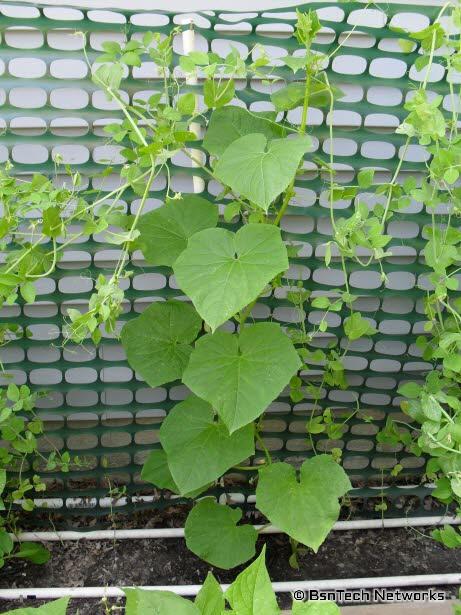 Next is to the potato “bin” and the carrots.  Not really a potato bin since I am not filling it up like I did last year.  At least this year all six potato plants have survived and doing very well. 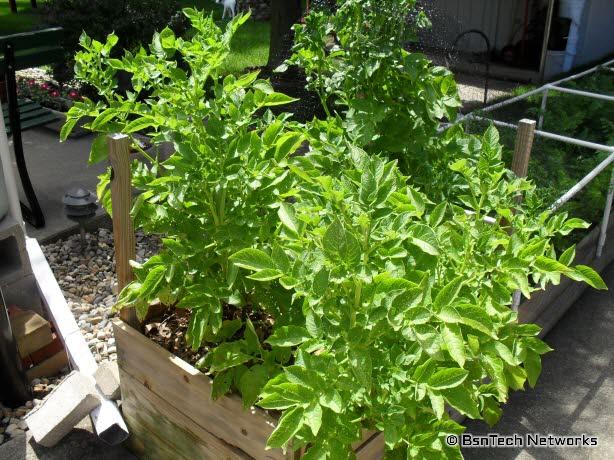 And the carrots.  These seem to be filling in fairly well now and getting tall.  This are a mixture of Burpee A#1 and Sugarsnax carrots.  The Sugarsnax carrots seemed to sprout before the Burpee A#1 carrots and grew a bit faster.  Whatever got in and killed a lot of the carrots seemed to dramatically affect the Burpee A#1 carrots – and took out probably 50% of them.  It was less disastrous with the Sugarsnax and maybe 60 – 65% remained alive. 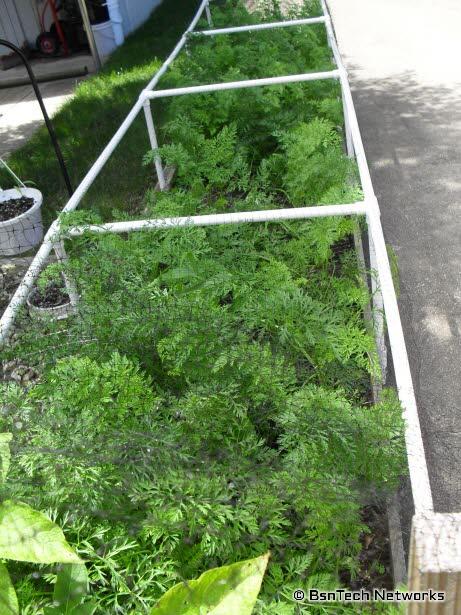 Let’s take a break from greenery and see some nice flowers.  The marigolds along the road in front of our house are very bushy and the flowers are coming along well this week. 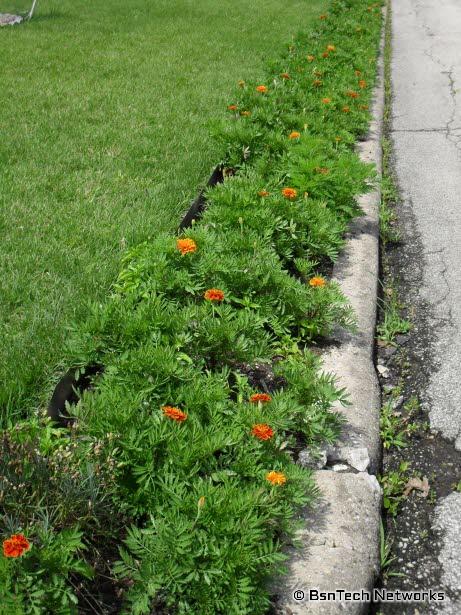 While hard to see in the above photo, most of those are pretty large flower heads. 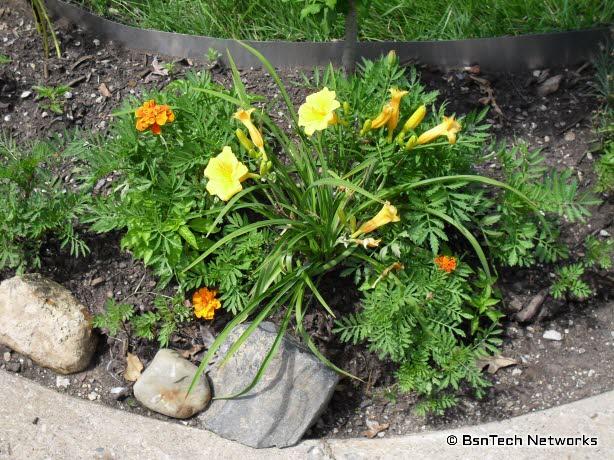 And lastly – here is the Rose of Sharon “tree” in our landscaping between the driveway and sidewalk.  The white flowers with a hint of red in the middle is nice – but I would have liked them to be all colorful.  Oh well – we got the “tree” for free from the in-laws so we can’t complain about free. 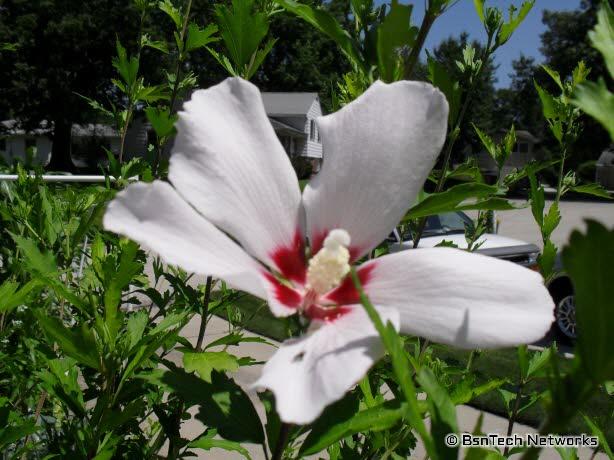 OK – so the last area of the tour – the front garden. 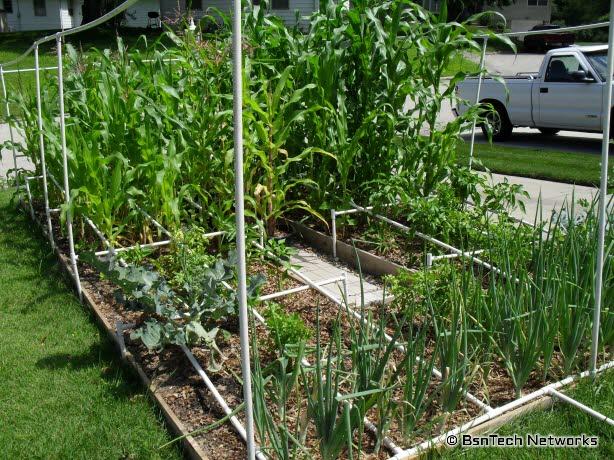 Most of the broccoli has been pulled out – except for two.  I’m hoping to maybe get some seed from them.  I’ve had another Ventura celery plant die this week; it seemed to have some kind of white-ish fluid down by the ground level and the stalks were split open.  With this hot weather we’ve had, I just don’t know whether I should be pulling all of the celery up.  Some also have some yellowing leaves as well.  We’ve had a substantial amount of rain to keep them hydrated lately – about everyday this week we had at least a half inch or more of rain.

Notice the difference with the corn?  Well, the Sugar Dots corn is on the left and it is a yellowish-green color.  The Silver Queen on the right is a full dark green.  The Sugar Dots have begun to put the tassels on and drop pollen.  There are around five or six plants dropping pollen – but only two of them have silks on them.  So I did my usual manual corn pollination by cutting all of the silks to an even length and shaking the tassels to get pollen into a bucket – then using a paint brush to paint the pollen onto the silks.  I then place a clothes pin up by the tassels with the date so I know to come back 20 days from that date and harvest it. 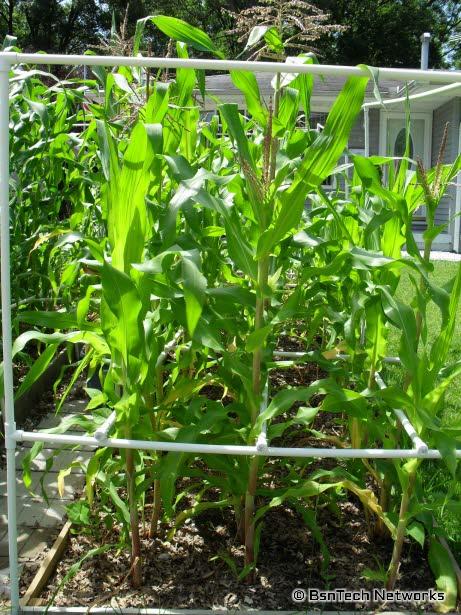 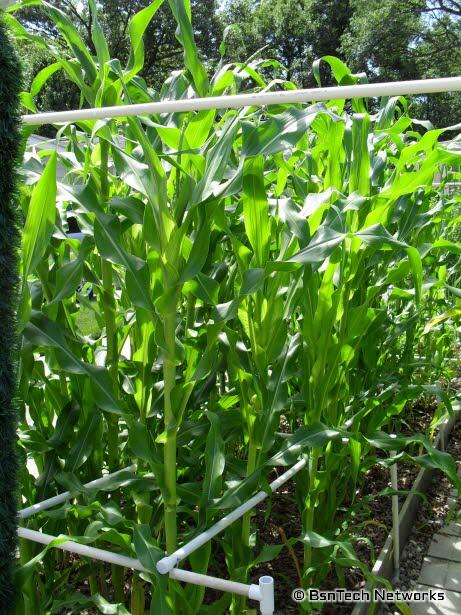 It looks like we are going to have a decent harvest from the Silver Queen Corn – as long as the tassels don’t begin shedding pollen until the silks emerge (had that problem last year with the Peaches & Cream corn).  Most of the stalks all have two areas where you can tell an ear is going to emerge.  Yay!  Glad that the Silver Queen is going to put on two ears of corn so we’ll have ample this year (and will probably make up for what we don’t get from the Sugar Dots corn).

And the last photo is from a California Wonder pepper plant.  I would really think the peppers would be loving this hot weather.  But, it just doesn’t seem like the pepper plants are doing nearly as well this year as what they did last year.  But, this one pepper plant is doing the best out of all eight and it does have a few peppers on it. 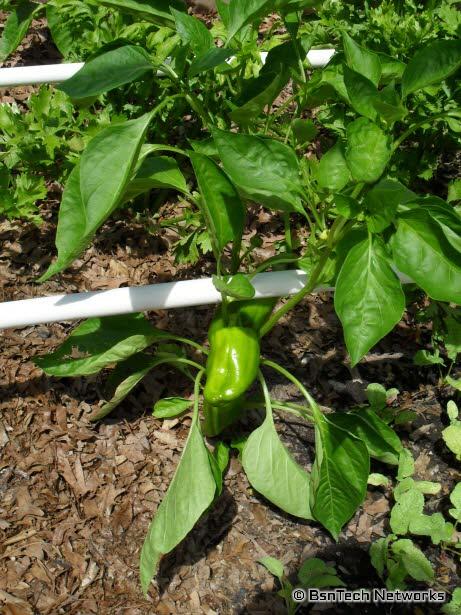 Welp, after a post of lots of pictures, that is all for the garden tour.  I’m debating about making a YouTube video and just going around the garden and narrate a bite.  Some folks like to see videos with narration rather than reading and viewing pictures.