Wow, it has been several weeks since my last post.

There hasn't been a lot going on in the garden for a few weeks – hence the non-existent posts.

Over the weekend, I took down the green fence that protected the garden behind the garage and beside the house from the deer.  All of the back garden that contained the tomatoes and cucumbers has been taken down.  The side garden has also been fully removed from corn.

The front garden had all of the green beans removed several weeks ago as well. The only thing remaining in the front yard is the California Wonder pepper plants and some Black Simpson Elite  lettuce.

Back on September 17th, we made several jars of applesauce – 19 quarts to be exact.  This batch took about nine hours to fully peel, core, smash, and cook the applesauce. 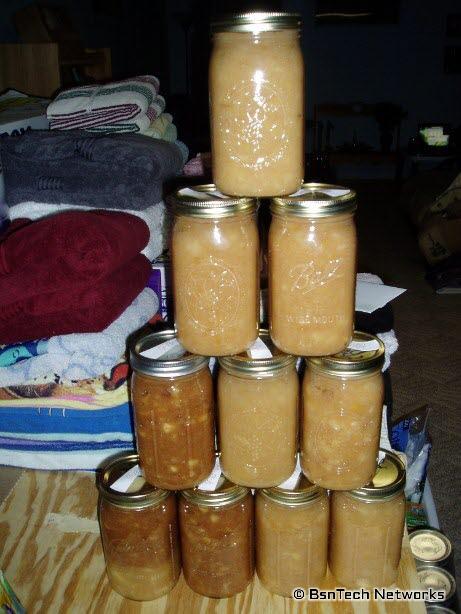 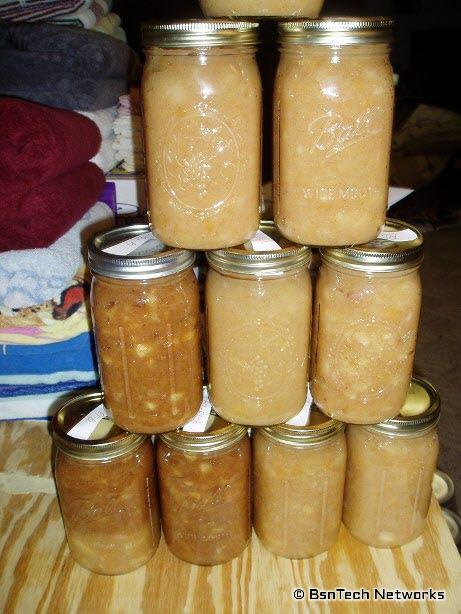 A week later, we went back to Wolfe Orchards in Monticello, IL and got another nine pecks of second-hand apples that had blemishes or other irregularities.  We still had about 35 canning jars left, and I wanted to fill every last one of them!

This time though, we only used an apple corer.  This basically cuts out a circular piece in the middle that removes the core and then slices the apple into spears.  We then took those spears and put them into the food processor that took care of turning them into applesauce for us!  The peels were still attached but they were minced very finely.  It does make for a little bit of chewy applesauce, but all of your good nutrients are in the peels of the apple.

The first night we made 21 cans of applesauce – and it only took us about four hours to do this many!  What a big difference from the nine hours it took for the 19 jars last time.  A few days later, we then finished the other 14 cans.  Overall, it took us less time to make 35 quarts of applesauce using the food processor and apple corer leaving the peels on – than it did the other way making 19 quarts!

Now, for the corn.  The Sugar Dots corn left much more to be desired this year.  I wasn't at all impressed with the size of the corn coming from them after they were mature.  However, again I chalk that up to me leaving them in the small seedling planters for three weeks… ouch.  Next year I still plan to plant Sugar Dots corn – instead of the Peaches & Cream variety.

The Peaches & Cream corn variety did put on two ears on some of the stalks, but left only one good ear.  The ears were much better than the Sugar Dots, but there was some major issues with the pollen.  Pollen began dropping from the Peaches & Cream variety a full week before more than half of the stalks even had silk emerging!  So, overall, we got about 40 ears of corn – although most of them were very stubby and maybe two – three inches long at the most.  The best corn did come from the Peaches & Cream variety – but I was not impressed with how many we got.  Out of 60 that were planted, only about 25 were usable for anything.

The California Wonder peppers keep on producing!  I picked another three peppers yesterday and they are very good.  However, we will see the demise of these soon because the temperatures have been getting very close to the freezing point over the past few nights.

The Black Simpson Elite lettuce is almost a complete bust for this fall crop.  Out of about 14 that were planted, we have only had a harvest of about 5 ounces thus far.  The leaves are very small.

Lastly, let's get to the potatoes!  Today I pulled up all of the Kennebec potatoes from the garden beside the house – and also in the potato bin.

I am pretty happy with the potatoes that came from the garden beside the house.  Out of the eight or so potato plants, there was almost 12 pounds of poatatoes that was counted!  I found a happy little slug in the ground eating it's way through a pretty big potato – so I couldn't use it because it was mushy and bad. 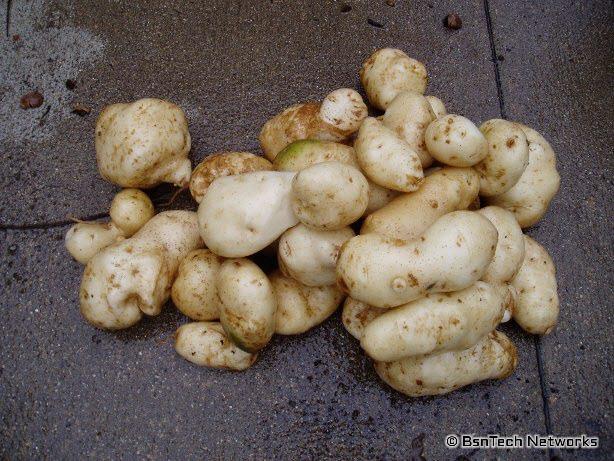 Unfortunately, the potato bin left more to be expected.  Right near the top of the stem of the potato plant, there were several Kennebec potatoes that I kept pulling off.  I sure was hoping that was a sign of things to come!  Welp, that was all the potatoes there would be.  It took about 45 minutes to uncover the entire potato bin, and the only potatoes there were was right on the top.  The stem was completely gone a few inches down into the soil. 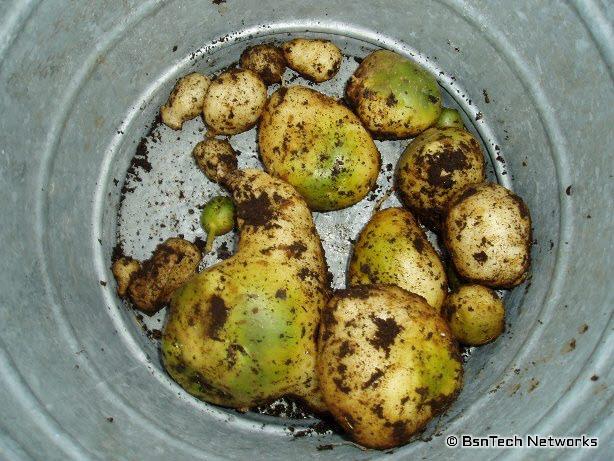 This measured in at about 2 pounds, 4 ounces.  Most of them are unusable because of the green in them since they were right at the top.  It is a shame because in prevoius pictures, this one potato plant that survived the box really had some huge foliage on it and made it look as though there were going to be tons of potatoes in the box.

Next year I do plan to try the potato box again – but this time I will most likely use straw as the plant grows taller instead of filling it in with soil.  Maybe this will help to keep the stem from rotting away.  In addition, I had my reservations about whether or not Kennebec potatoes would continue to grow in a potato box – because it is said that only late varieties of potatoes will grow and continue making potatoes all the way up the box.  Kennebec is a mid-to-late variety potato.  I'll have to see next year if I can find some russets for this experiment.  But, if next year also turns up a bust, then the potato bin idea will be scrapped and I'll use the space for something else.

Well, this ends this year's garden for the most part.  We'll continue to get some additional peppers and maybe a little more lettuce – but everything else has been cleaned out and gone.  I have several pages of information from the journal I've been keeping so I'll do a year-end tally once the peppers and lettuce are fully gone (frosted to death most likely soon) and post total results for comparison.