Well as expected, I got very busy over the past couple of months and wasn’t able to get on here and make a post.  It didn’t help that I sent my camera to a friend for another project – so I wasn’t able to take pictures of the garden.

Without pictures, no one can see the progress of how things are going!

Well, since the last post, we no longer have any lettuce.  All of the lettuce started bolting and grew to be extremely large – almost like mini-trees!  We had a good run of lettuce while it lasted – and now we have went back to the dreaded iceberg lettuce from the grocery store.

What else has happened?  All of the green beans in the front were completely eaten.  Deer got to them.  Pretty amazing.  I only put the deer netting up half-way this year – thinking it would look better in the yard.  Well, that was bad to do.  I’ve since had to raise the netting to be the full seven feet tall.

Even that didn’t stop the deer!  I left the pathway open down at the end of the front garden – and the deer found out they could walk up the path and get to the green beans! 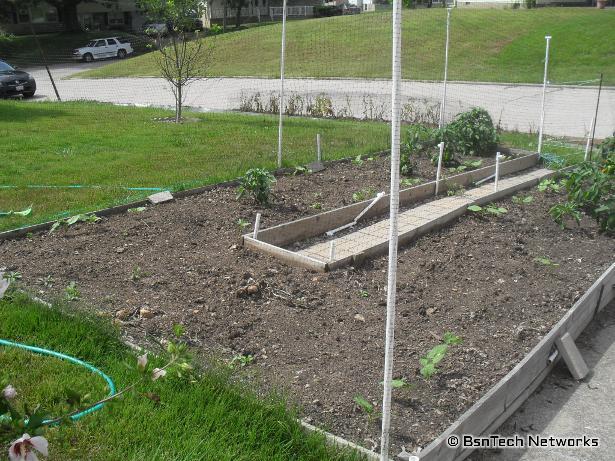 Not much left in the front garden after everything was taken out.

Here is a closer look of two of the pepper plants.  These photos were also taken on August 4th: 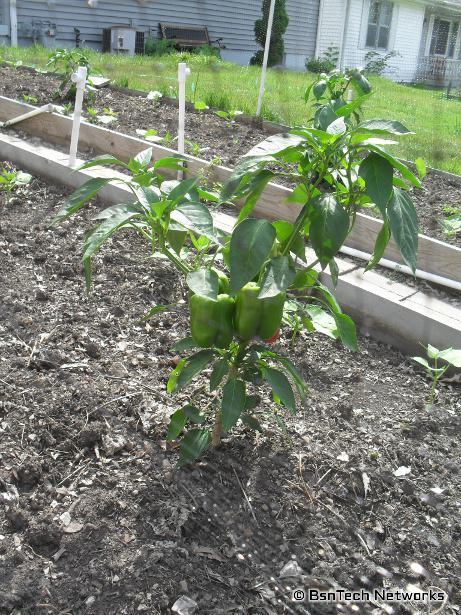 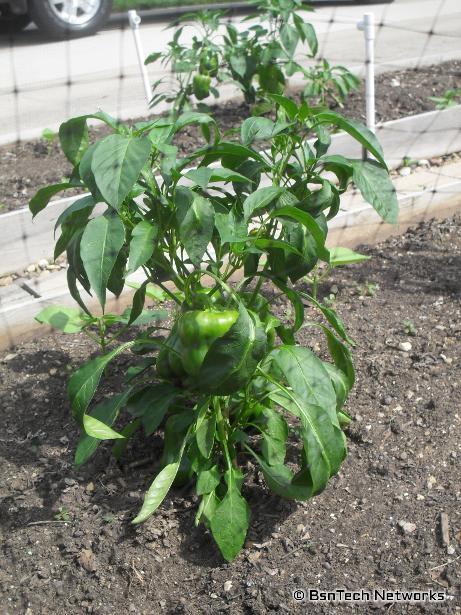 This past weekend, I cut most of the peppers off of the plants.  I did leave a few on one plant because they were doing exceptional and hopefully will turn red soon. 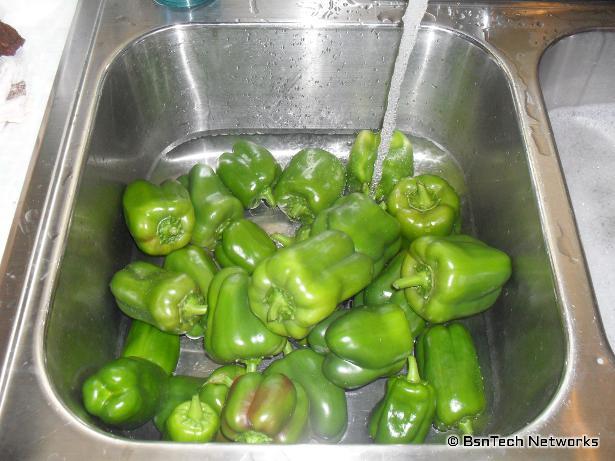 The big story for last week was potatoes!  Yes, all of the potatoes that were planted along the road were all dug out.  This was quite a task though – and planting potatoes should only be done unless you have a lot of time to dig them up.  It took about four hours total to dig through and get all of the potatoes. 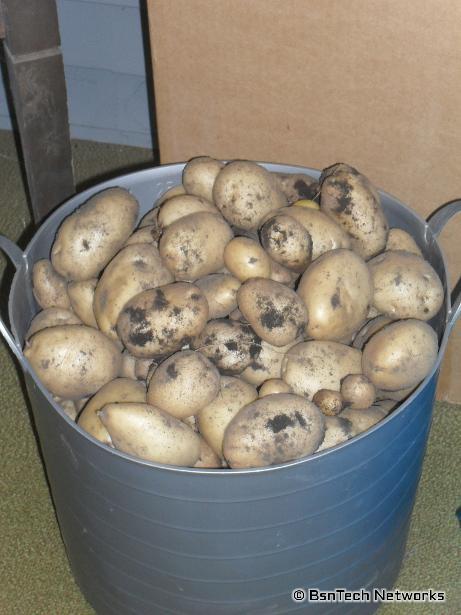 The bucket above was just from HALF of the row: 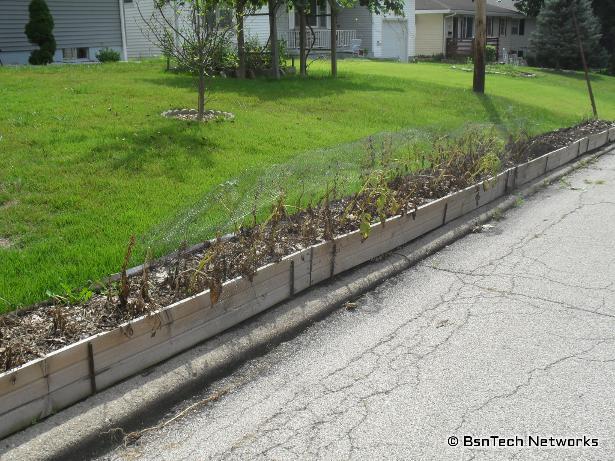 You can see in the photo above that there is netting over the potatoes that still needed picked – and further towards the back everything was already harvested.

After a break, I went back out and completed the rest of the row.  It is about 50 feet.  All in all – this was definitely one of the best years for potatoes – I think it is because of the new area that they were planted in.  Having full sun did very well for them.  We got four five-gallon buckets full of potatoes.

There still is more potatoes to pick in the side garden and I am debating whether to dig up the potatoes in the back garden where volunteers came up.

What else was done?  Well this past weekend, I also started harvesting the carrots.  This was a photo from a week prior: 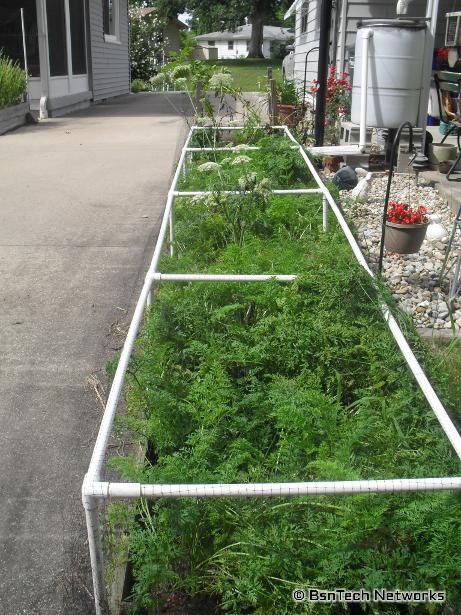 I went through and pulled out half of the carrots: 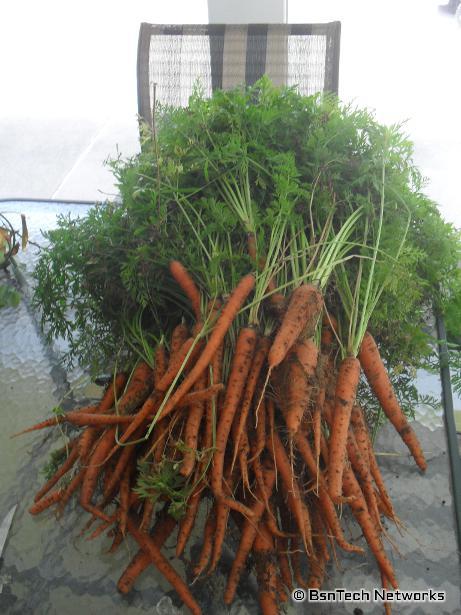 Some good-sized ones, others not-so-good.  Chopping and cleaning carrots is another one of those very tedious processes.  Just for doing half of the carrots took another four hours to do!  That included pulling them out of the garden, cutting the tops off, rinsing/cleaning them, peeling them, and then cutting them into pieces.  There has got to be a low-cost alternative to doing all of this by hand.  I searched online and found industrial-grade carrot cutters but they are very expensive and out of reach for the home gardener.  Just even some kind of tool that has several blades spaced 1/4-inch apart or so would be very helpful.

Next – we have had a handful of tomatoes.  This year has not been great for tomatoes compared to previous years.  It has been fairly cool this year and I think that might be part of it. 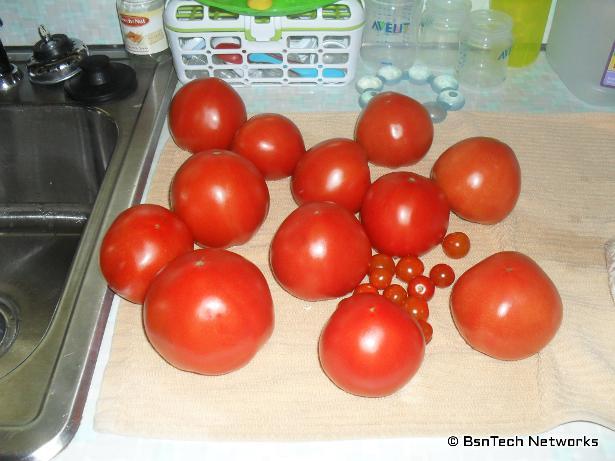 And that takes us to just some general photos of around the garden.  First up is the grape arbor.  It is loaded with grapes and they are starting to be ready for picking.  I bet the birds will get to them before we do though. 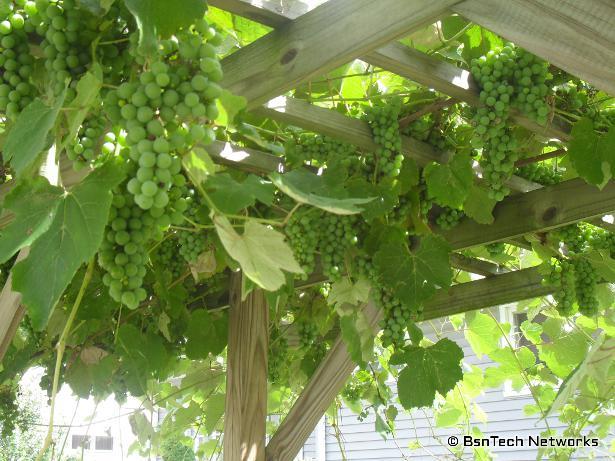 Then we have a Rose of Sharon tree in the front.  There is another one down by the road – but this one near the sidewalk to the front door has been growing exceptionally well for the past few years. 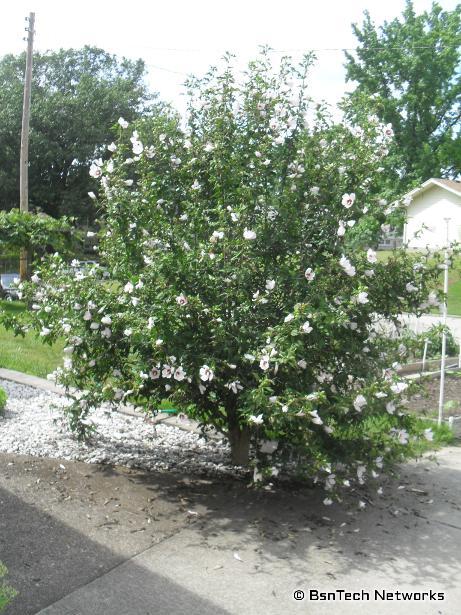 The side garden – doesn’t look very appealing.  There are a few tomato plants here and all of the potato vines are over the walkway now.  One of those areas that needs some attention with getting the potatoes dug out. 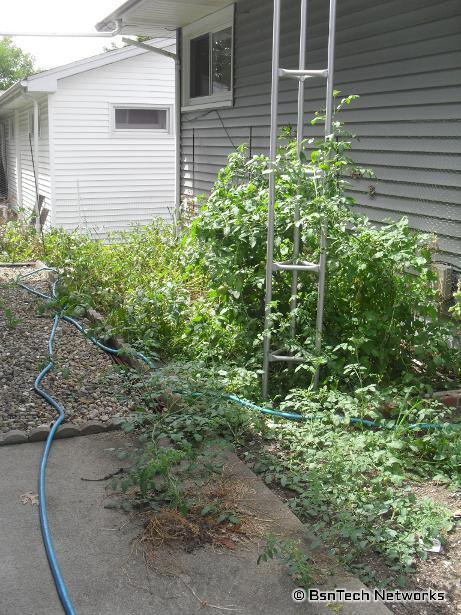 The back garden is even worse.  There are weeds growing everywhere.  I’ve sorta just let this area go this year.  Each time I look at the build-up of growth, it is discouraging knowing what needs to be done to clean it up.  Not to mention – there are tomatoes and potato plants all intertwined together. 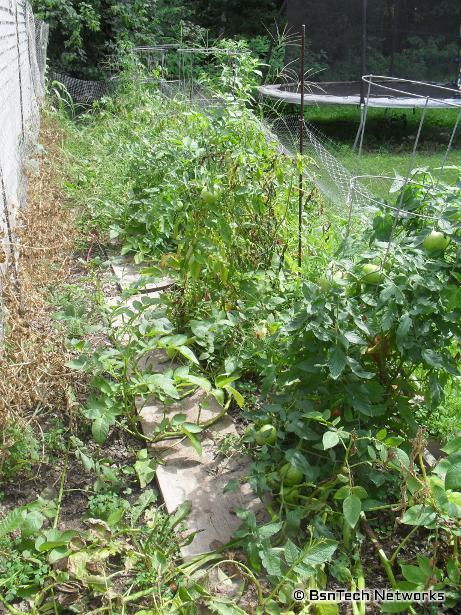 Although it can’t be seen above, there is one cucumber plant that managed to sprout and grow.  It has a couple of flowers on it – so we might get a few cucumbers this year.  None of the eggplant seeds sprouted.

Well, that is all for this posting!