It has been two weeks since the last post.  Nothing really interesting went on last week at all.  The weather was nice – in the 70’s and raining every other day – so the plants loved it and I didn’t have to water!

A lot of the lettuce has been pulled out of the patio garden because they just got old or the temps were too hot.  On the right-hand side, you can see one of the New Red Fire lettuce plants that is very tall and bolting.  In the front is the basil and there are other lettuce plants still in. 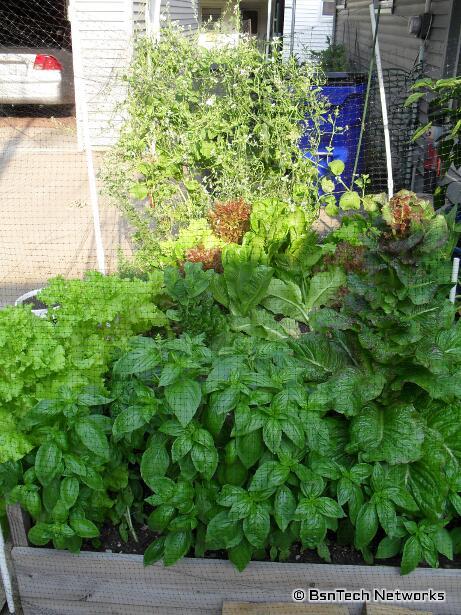 Over by the door of the patio is the two Anaheim Hot Pepper plants.  They are in a large 30+ gallon tote.  These two are very tall and looking good – and there even is a small pepper beginning to start on one of them. 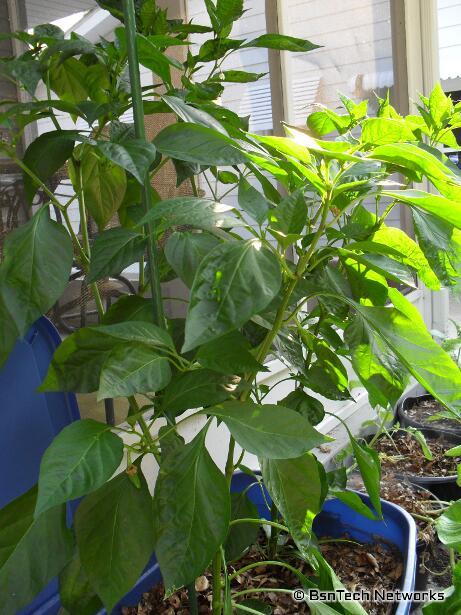 Compare that to one of the California Wonder peppers in the front garden that is maybe six inches tall. 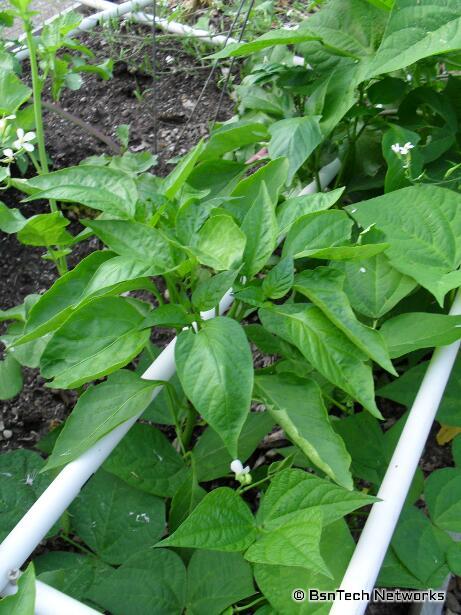 Moving on to the other bed on the driveway.  This has some Kennebec potatoes in it at the front along with some Sugarsnax and Scarlet Nantes carrots.  The Sugarsnax carrots definitely have grown faster than the Scarlet Nantes.  Time will tell to see the quality of the carrot and whether buying the more expensive hybrid Sugarsnax is worth it. 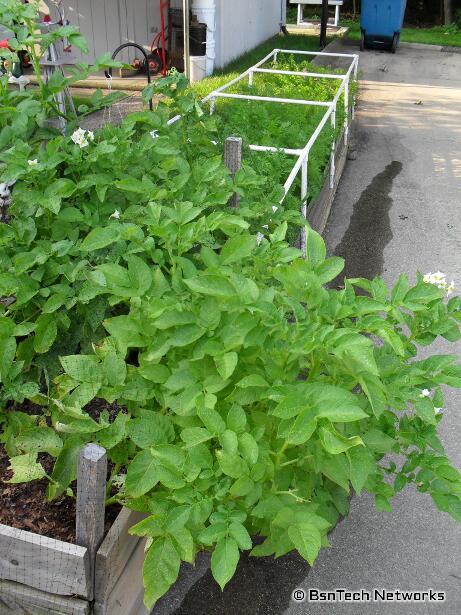 Over in the side garden, the Cascadia Snap peas are finally succumbing after providing some sweet, tasty peas.  I picked two pounds of peas just a few days ago – and there are still more that need to be harvested.  All of the cauliflower has been pulled out and only a few broccoli plants remain.  The rest of the vines you see are from the Yukon Gold potatoes. 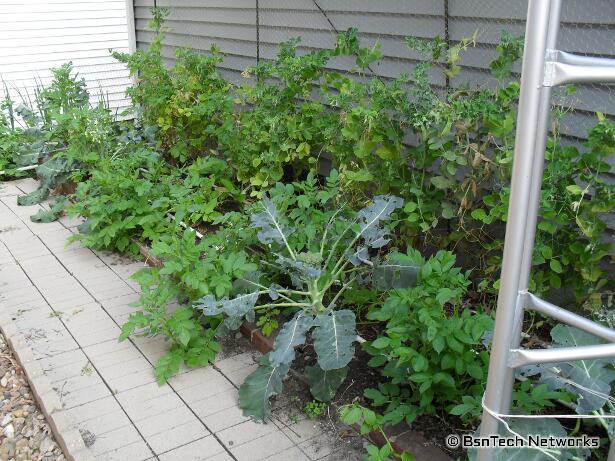 See a little bit of yellow color there in the back?  Yep, one of the Premium Crop broccoli plants had the main head cut off – and it put up some side shoots.  I never got around to cutting them and so it is flowering. 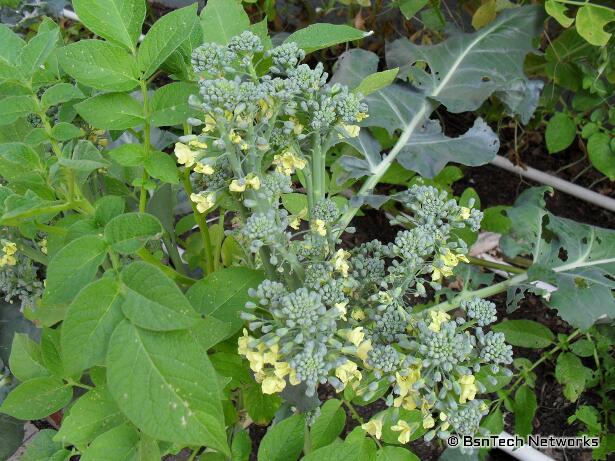 And just to the left of this area is the watermelon bed.  The Crimson Sweet watermelon have taken over the entire area and the Bush Blue Lake 274 green beans are really doing well.  You can also see some potatoes in small buckets as well in the back. 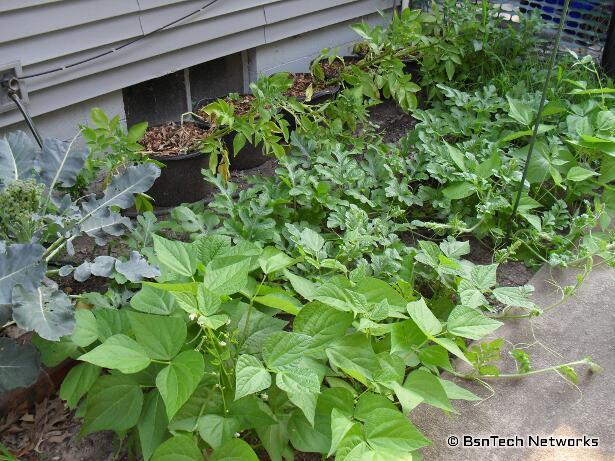 The back garden is almost to the point where I no longer can walk through it!  The potatoes have really taken over.  The peas back here have also begun to die off as well.  There are five cucumber plants in this area – but they are hidden pretty good and haven’t sprung up quite yet – making them impossible to see. 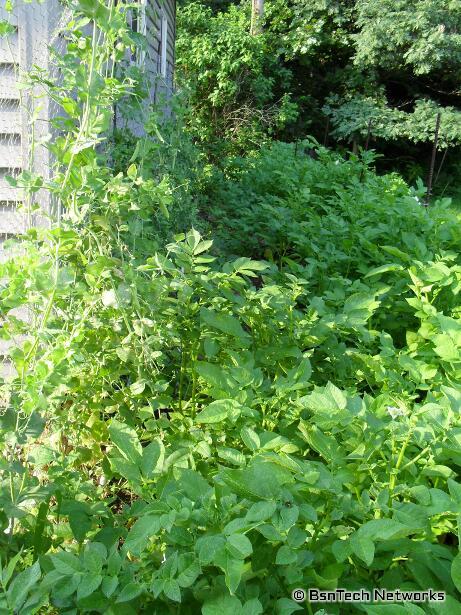 Now – the front garden.  Things have really taken off up here! 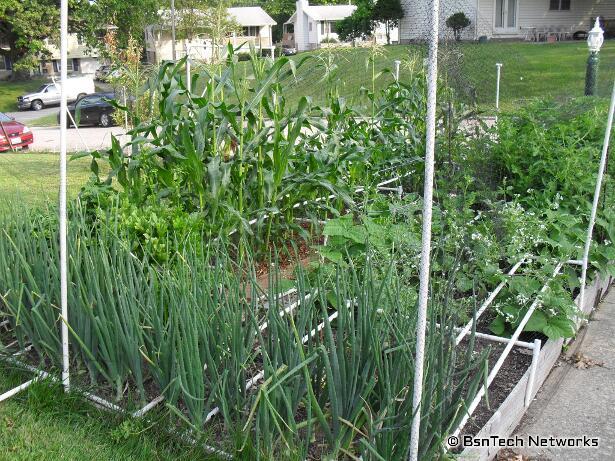 The Copra onions are really beginning to bulb up, some of the corn is beginning to shed pollen, the green beans are still trying to fight for sunlight, and the tomatoes have really taken over!  Note to self – planting tomatoes two feet apart from one another in each direction is WAY too close. 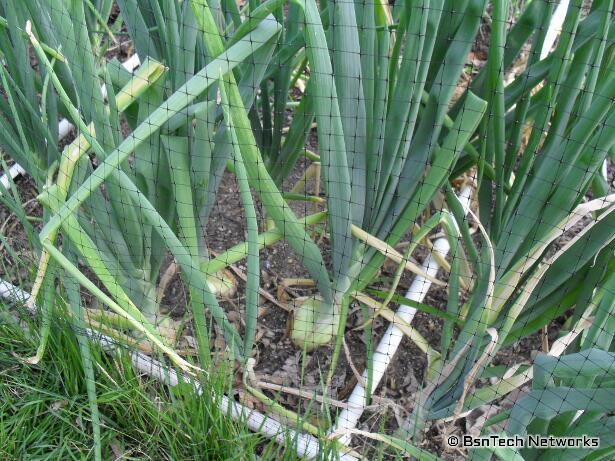 Take a look at one of the Ventura Celery plants – it is also bolting and has a flower head on it as well.  We have harvested a bit over half of the celery so far – and two of them rotted in the ground. 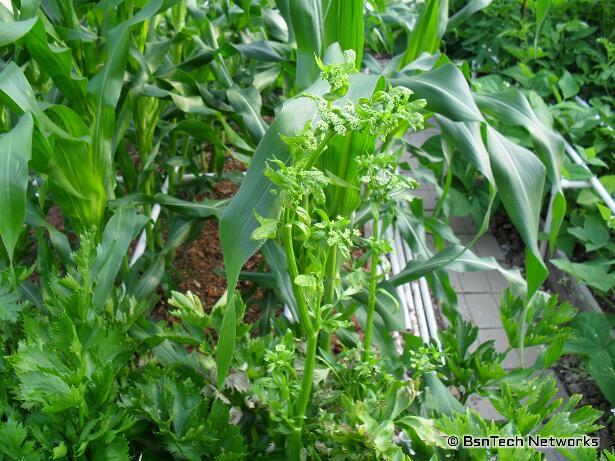 Here is a back view of the Honey Treat corn area.  Unfortunately corn was planted four different times because it simply did not sprout well.  Much less than 50% germination between all the times that they were planted. 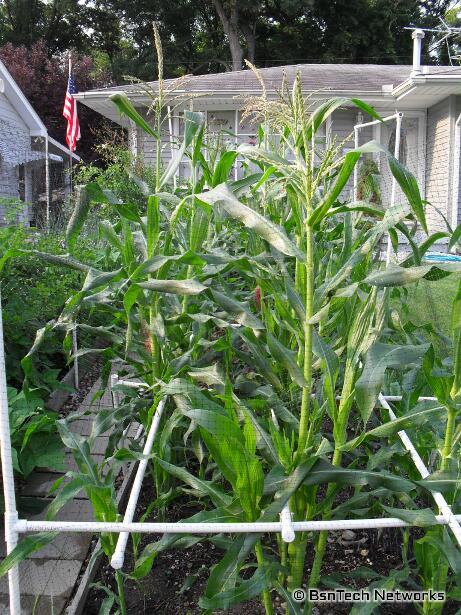 Take a look at this!  There are THREE ears of corn starting on this one plant!  Last year I tried to grow Sugar Dots corn in this area and it failed horribly; growth was stunted and we might have got one ear of corn for every two plants.  This year – the corn is doing well!  I put in a good layer of mulched-up leaves and tilled it in last fall – then placed another good layer directly on the soil after the corn was out of the ground.  Also used some pelletized fertilizer – which I don’t like doing – but I wasn’t going to have a failed corn crop this year.  But THREE – that is the best I’ve had yet. 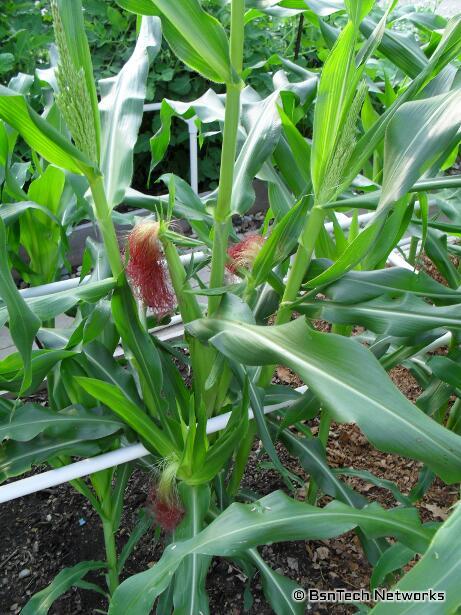 Nestled over by the tomatoes, the green beans are trying to fight for sunlight.  Many of them already have little green beans started. 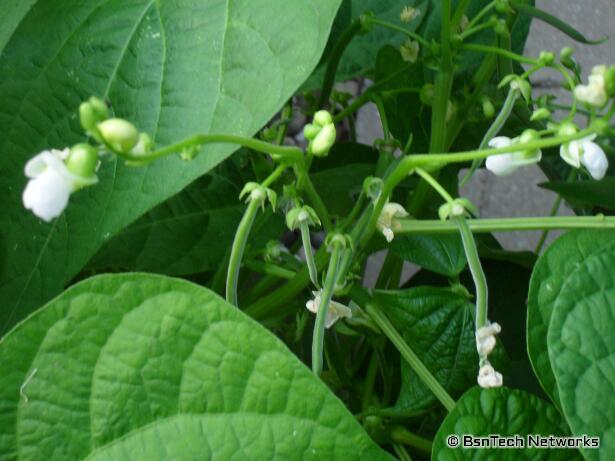 And look at the mess that these tomato plants are in!  There is zero space between all of them. 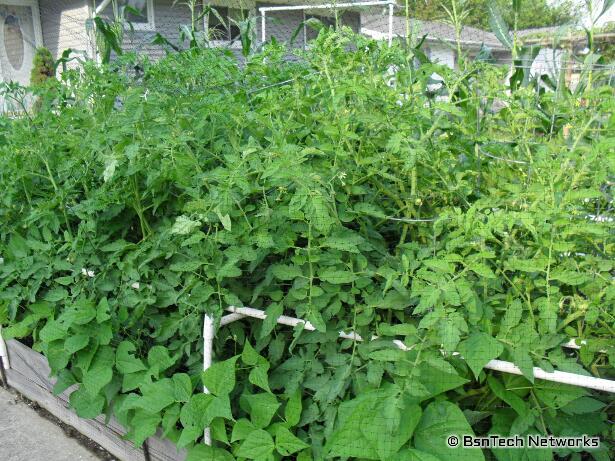 There are quite a few small green tomatoes starting on them though – so I can’t wait until we start to get some good tomatoes out of the garden!  This picture below is from one of the plants I had to buy – Better Boy. 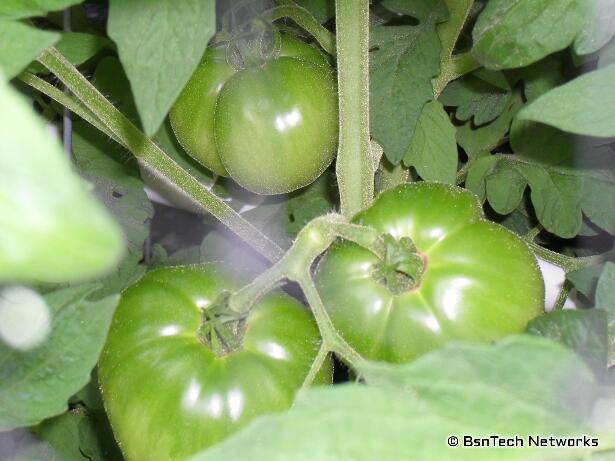 And that just leaves one picture left.  My wife planted some wildflowers down at the curb of the road and our driveway.  There is a pretty nice selection of colors and flowers that look pretty nice.  The flowers are pretty tall, but do look nice. 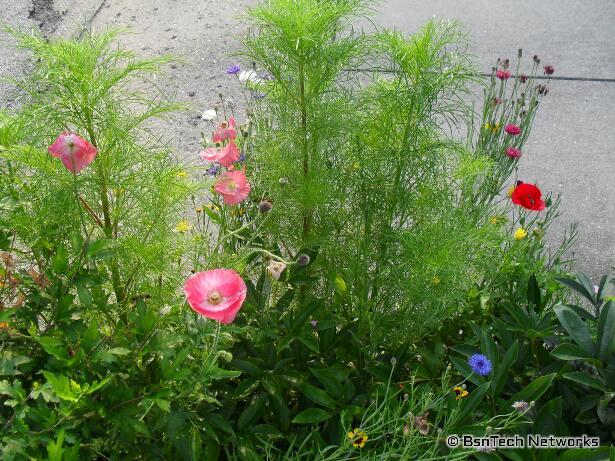