I took several pictures over the past week – and some last night as well.

The weather – again – has been extremely hot.  95 degrees or so over the past few days and very dry.  Humidity 45 – 60% is low for Illinois as it is typically 75% or higher throughout summer.  We did get a good rainfall at the beginning of the week to soak things down – and refill the rain barrels.  That was certainly welcome – but we still are under half of the normal amount of rainfall for this time of year.

Moving on to the garden.  All but three of the broccoli plants have now been cut down.  Basically the Green Goliath broccoli were all harvested. 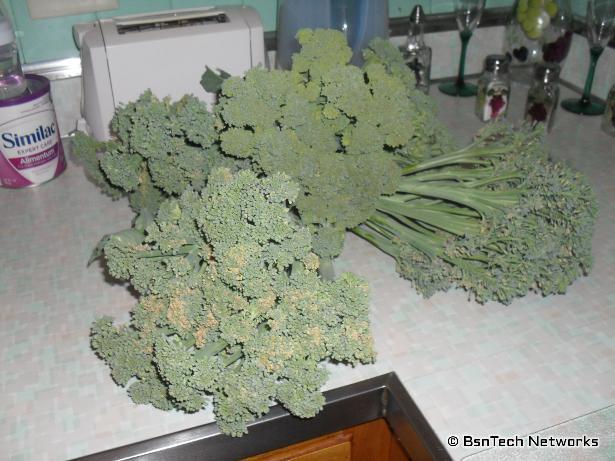 You can see that I picked some of the broccoli a bit late – as the flowers were already opening up.

Here is a photo of one of the Green Goliath broccoli plants.  These plants were put in the side garden this year (as they were last year), and there is just not enough sunlight to make them happy.  They are going to have to probably go up into the flower bed next year.  Last year, some were planted in the flower bed and the heads on them were huge.  Full sunlight for broccoli makes a big difference (well, and soil composition too). 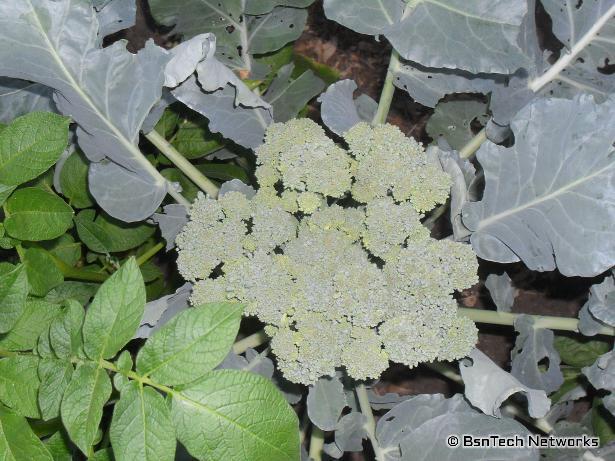 Now, compare the Green Goliath broccoli to a picture of the Premium Crop broccoli. 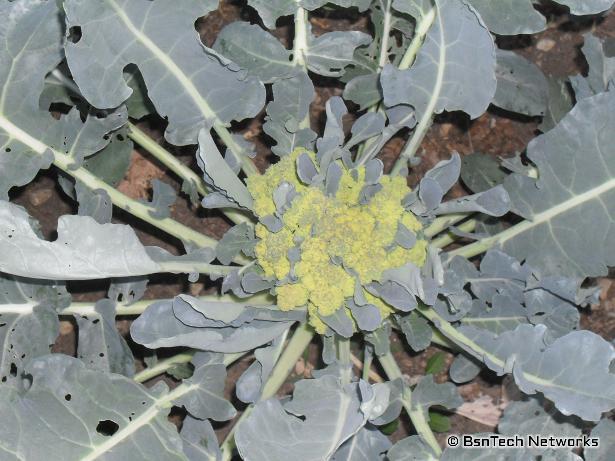 The coloring of the broccoli is different – and with the Premium Crop broccoli, ther eseems to be some leaves that are actually tangled within the head of the broccoli.  Not so pretty.

I have been growing Green Goliath broccoli for several years – probably over five years now.  The seed was bought at least five or six years ago, and with keeping all of the seeds in a ziplock bag in the freezer, the seeds are still viable and germination is still fairly good.

Alright, moving on to Snow Crown Cauliflower.  Four of them were located down in the flower bed that got full sun – and they did very well.  My first try at cauliflower was a disaster using the Snowball X variety – but the Snow Crown cauliflower variety impresses me.  Even through drought conditions and intense heat, every single plant has always produced a good-sized curd. 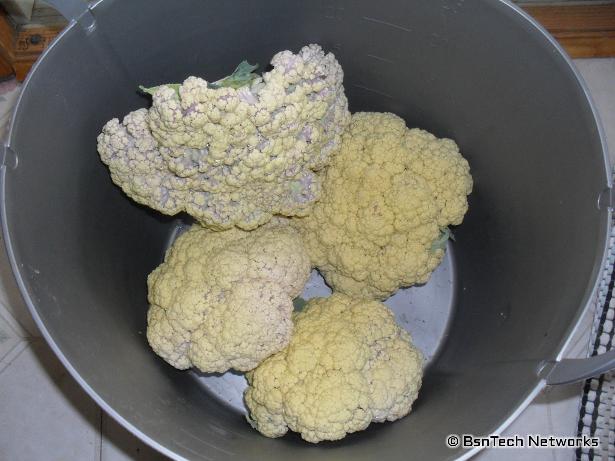 I just had some of the cauliflower last night as a treat – dipped on some ranch dressing.  The rest went into the freezer so we can use it down the road.

Movnig on to Cascadia peas.  The peas are all dying off now becuase of the heat.  We didn’t get nearly as many peas this year as we did last year.  I didn’t take any other pictures of them, but here is one tkaen right after they were harvested on the 18th. 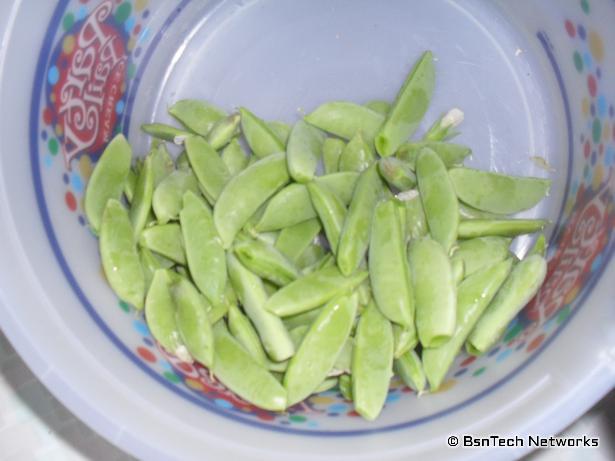 I like the plump, edible pods.  I’ve seen other varieties where you either can’t eat the pods – or you can’t allow the peas to get large.  Cascadia snap peas is the variety of choice for me and it does fairly well.  The sweet taste of them makes for a nice treat in salads or even as a side with it’s crunchy texture.

These other photos were just randomly taken last night while in the garden.

I left the strawberries uncovered this year in the strawberry pyramids.  The deer have obliterated them – and there is nothing left but stems. 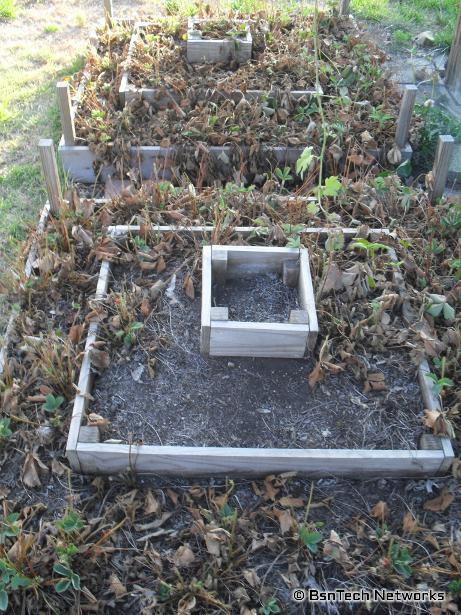 The tri-star strawberries look deathy ill as well.  I’m not sure yet what to do about this issue – because we just were not happy with the size of the tri-star strawberries anyways.  They were quite small and didn’t meet our expectations.  They are an everbearing strawberry though – meaning that they produce continuously through the year.  Well, that didn’t happy either.  So, I am OK with the deer eating them down.  The strawberry beds will most likely be gutted and new strawberries planted next spring (if time allows for that!).

The front garden is growing very well.  Finally after planting Honey Treat corn about four or five different times, the corn area is full.  Although the plants that sprouted first are overtaking those that were planted last, they do all appear to be slowly growing.  Those planted first already have the tassels beginning to emerge – and have one and even two side shoots that look to be ready to produce an extra ear of corn. 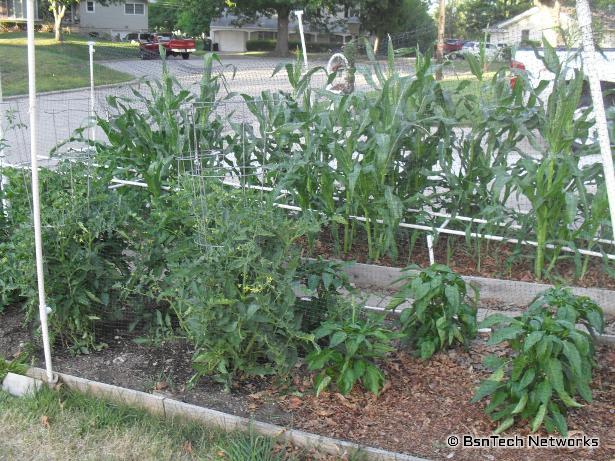 In the front you will see the California Wonder peppers to the right and also the tomatoes on the left.  The tomato plants have a huge amount of blooms on them – so we’ll see how the tomato crop is this year. 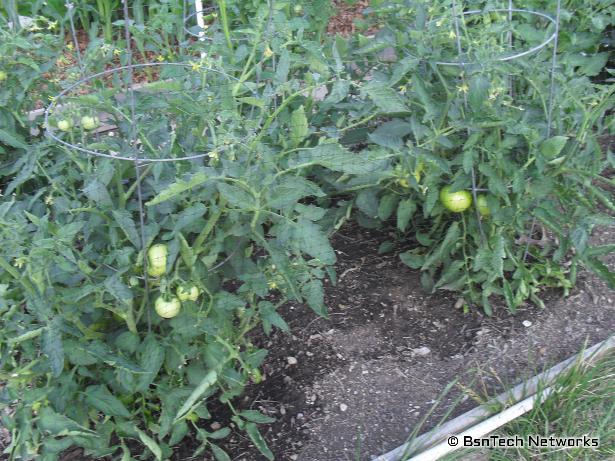 And lastly to end the entry, I was quite surprised with the grapes.  The grapes have really grown everywhere this year – and I am surprised just how fast they came back.  We had a late freeze that killed the grapes earlier in the year (didn’t affect anything on the ground).  But, under the grape arbor, the vines are loaded with grapes.  The question will be if they are edible though and if we can get to them before the birds do.  I tried one of the grapes a few years ago and it wasn’t pleasant – and they had seeds in them.  When I put my order in for them online, I specifically got seedless grapes – but apparently the business that sent them to us didn’t even send us the right variety (and on top of that, two of the four were dead). 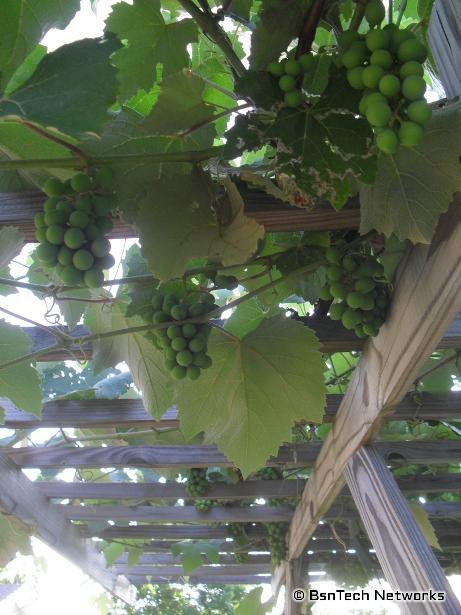