OK – this post doesn’t really belong in the Computers blog – but it certainly fits here since it is “techie” compared to the gardening blog.

So the question is – can you hook up two OTA TV Antennas?

In a nutshell – YES!  You certainly can combine two tv antennas to get a better signal.

Why would you want to hook up two tv antennas?  Well, let me explain.

We had just a small little OTA TV antenna – maybe 2.5 feet long.  Believe it or not, this antenna worked well to pick up the TV stations in our area.  We have a couple of towers about 11 miles away from us to the east, a couple more about 45 miles away to the east, and another one or two over to the west of us by about 22 miles.

OK – so do you see a dilemma here?  The TV towers are to the east and west of us.

Here is the funny thing.  The station that is only 11 miles away from us – would cut in and out on our TV.  But, the TV stations that were 20+ and 45 miles away came in just fine.

Therefore, I went to buy a new antenna.  I got one that said it would work for up to 100 miles away.  The box was about five feet long.

Boy was the looks of that box misleading!

I got it home and found three different sections that were all about five foot each.  The whole thing took about an hour to put together – and it is three times larger than the previous one! 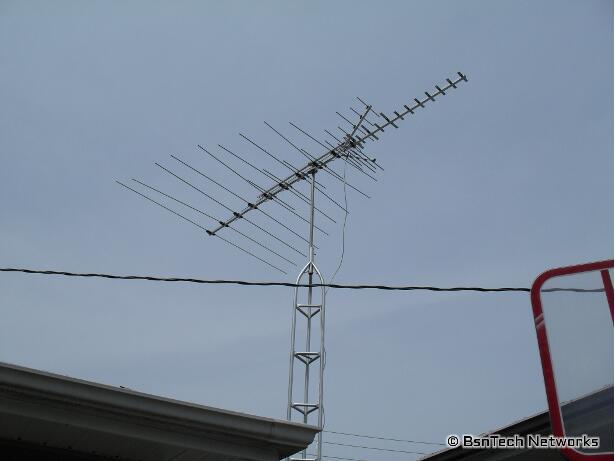 It certainly doesn’t look very large about 20 feet up into the air, but it was a bear to get setup!

Alright – now you see the “V” section that is headed towards the right side of the picture?  That means that the TV stations you want to pick up are in that direction.  That direction is East in my case – which would be the TV towers that are 11 miles and 45 miles away.  This was originally the way I had the old antenna – but yet the towers 11 miles away still would cut out.  Interesting eh?

So I went to re-scan for TV channels!  Alas!  We got maybe four more channels – although they were basically just repeats of other channels we had anyways.

Now for the bad news.  The TV stations that were to the west (would be to the left of the photo above) were cutting out!  That was FOX and ABC.  Can’t have that!  So, my question is, is a larger OTA antenna better than a smaller one?  Well, certainly – in my case – it must be!  The smaller antenna was better than the larger one.  Although the larger antenna DID fix the problem with the tv tower 11 miles away cutting out, now the stations 22 miles to the west (FOX and ABC) now are cutting out!

So, I got to thinking – is there a way to combine two OTA antennas together?  I looked online and found folks talking about hooking up two TV antennas and then combining them with a splitter – which then runs back into the house.  However, many folks said that this would cause dual-pathing and other interference.  Now, because everything is digital, I’m not really sure if that would matter anymore or not.

I came up with another idea – why not connect both TV antennas together using a wire – and only one of them hooked to the coax!  So, that is just what I did.  I connected a 12-guage electrical wire (two wires) to the large antenna – and then connected it to the smaller antenna.

Now, this is my configuration.  You can definitely see the difference between the old TV antenna and the new one – it must be three times as big (or larger)!.  Notice the configuration – I have the “V” sections pointed in opposite directions; the largest antenna still pointing to the east – and the small one pointing to the west. 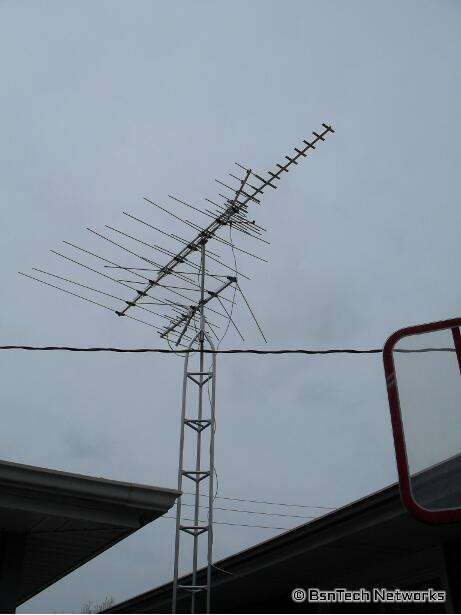 The two antennas are maybe separated by two feet at the most.  it is hard to see how I have them hooked together in the above photo.  The wire you see on the right side is the coax cable – it is hooked to the largest antenna. 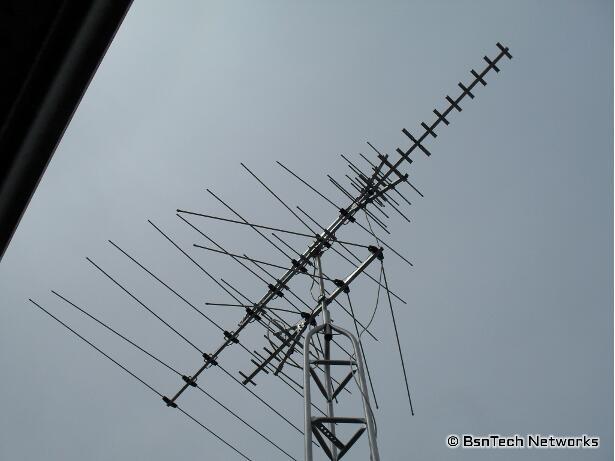 Look at the difference in size between those! 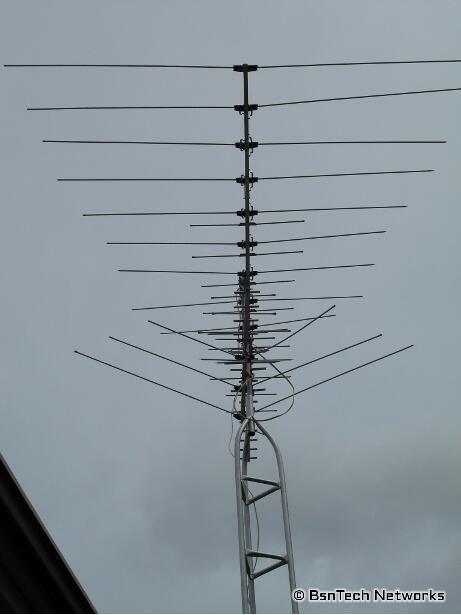 Alright – this is the back view (looking to the east).  Do you see that wire that looks like is is looped a bit just above the TV tower on the right side?  That is my 12-gauge, 2-wire electrical wire that connects the two antennas together.

While it wasn’t exactly simple to hook up when you are on a tower, it is possible.

Down to the TV I went!

Guess what?  Now, I get all the stations in without any problems!  So, it goes to prove that you can hook up two OTA antennas together to get better reception!

I almost had a notion to take the larger antenna back – because it simply is too big.  It was $84 at a local garden/home store.  They had a smaller variety that was $20 less.  But, it just isn’t worth dismantling both antennas from the mast, taking apart the large one, returning it, then putting it all back up again.

So overall, this did fix the issue with the TV cutting out on the station that is only 11 miles away – and we picked up about four more channels – but they are all repeats of each other.

16 thoughts on “Can You Hook Up Two OTA TV Antennas?”