Wow, it has been over a week since the previous post!

Back on August 12th – a day after the last garden update, the wife & I canned some goodies!  With the tomatoes and cucumbers we picked the day before, it was time to put some of them to use.  There was just too much to eat within a few days, so why not can them!

We canned five containers of tomatoes and four containers of pickles.  I do have to say – the Burpee Pickler cucumbers are much better for canning!  They seem to be more crisp and do not have nearly the number of seeds – although they did have some seeds.

To make the pickles, we just cut the cucumbers up into slices and filled the jars with them.  During this time, we had a package of the Ball's Picking Mix going over the stove at a boil.  The pickling mix was about $2 at the local farm store.  For the picking mix, it requires one package, six cups of water, and 2.5 cups of vinegar.  The mix says it will make four quarts, but we still had enough left to do another quart (which I did yesterday night).  I guess it all depends on how well you fill the jars.  Then, put in a hot water bath for 15 minutes.  Ensure the hot water bath is at a rolling boil before starting the countdown.

To make the tomatoes, we dipped each tomato in hot boiling water for about a minute.  Then, cut a small incision in the tomatoes and peel the skins right off!  Afterwards, ensure to cut the pieces however you wish before putting them in the cans.  Make sure to really press as much as you can into the jar – otherwise you will be left with air bubbles (which over time go to the top and make the water level lower) and you will also be left with a large gap of water solution at the bottom while all the tomatoes float towards the top.  Add two tablespoons of lemon juice to each container (used to lower the pH to allow the tomatoes to preserve longer) and then put in a hot water bath for 45 minutes.  The hot water bath needs to be going at a rolling boil before you start the countdown.

So, here is the results of a day of canning on August 12: 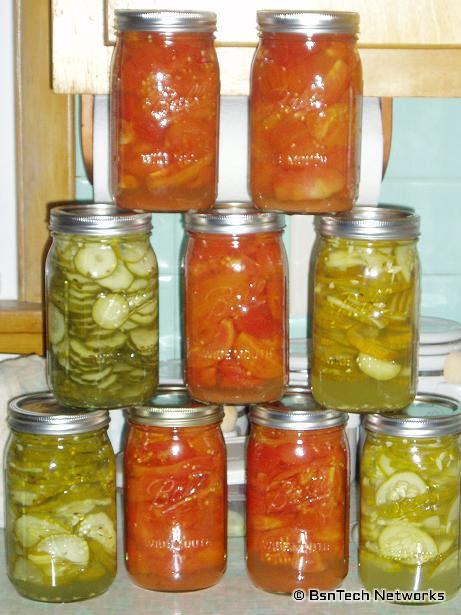 Now, onto items from yesterday and today.

So far to date, we have quite a bit of canning that has been done! 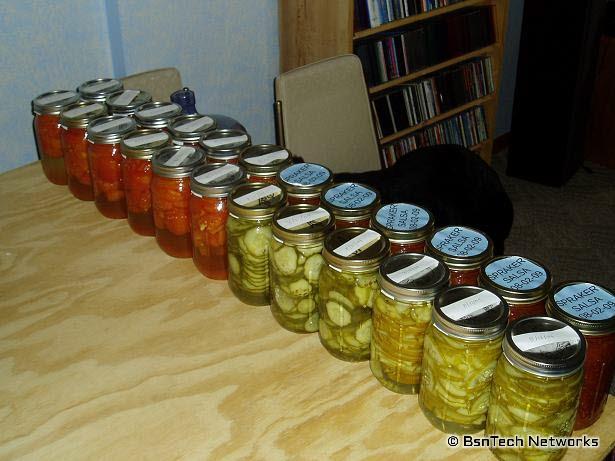 This morning I got up and decided that the Black Simpson Elite lettuce needed to be transplanted into the garden.  I wasn't exactly sure where to put the lettuce at, but I made room by taking out some old green bean plants.  The green plants taken out were in the front bed next to the peppers. 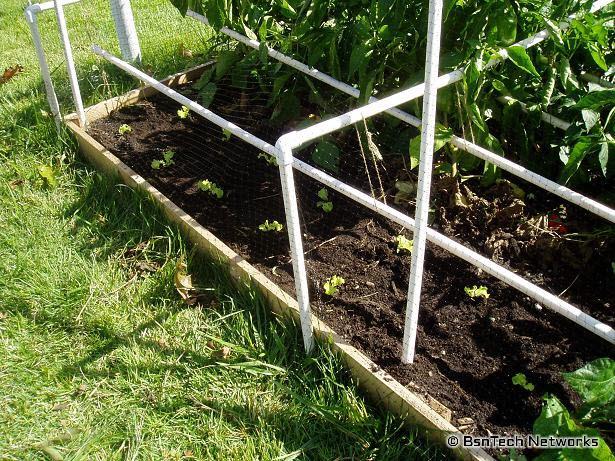 While planting the lettuce, I noticed that there were a few red California Wonder peppers!  Wow, I was surprised to see those!  There were three peppers that were in different stages of turning red, but I picked all of them today.  After seeing these, I am thinking that the rest of them will be harvested when they are red. 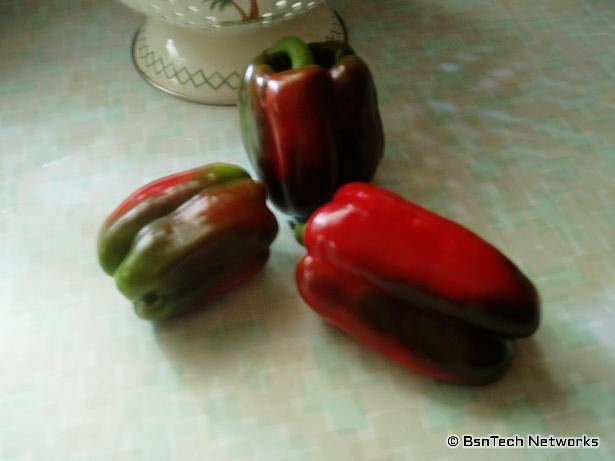 Just a quick picture of the back green bean bed – it is coming along rather nicely and there have already been some green beans picked from here! 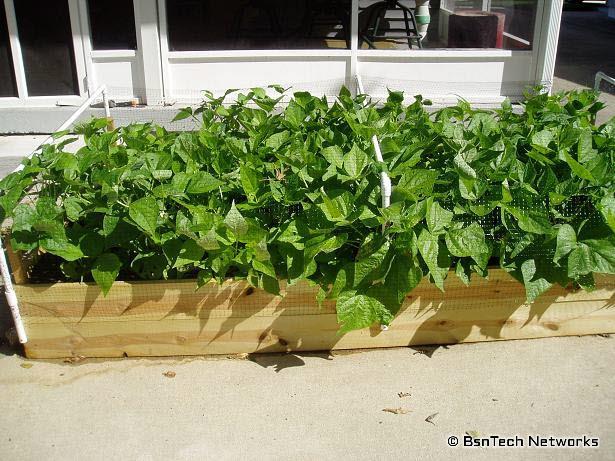 Well, another tragedy hit the corn a few days ago.  We had another bomber of a storm come through with 60+ mile per hour winds.  There was at least one tornado that touced down about 45 miles southwest of us from this storm as well.  Well, when the storm hit us, it knocked down all of the corn again.  When I got home and saw the devestation, I was quite ticked off and blew off some steam by saying I wasn't going to do anything about it – that I was fed up with nursing the corn back to life.  Well, after about 30 minutes, I went out there with some stakes and twine – and I tied up each of the three rows of corn to one another and attached them to some stakes to keep them in place.  The Peaches & Cream corn is over five feet tall now and are just beginning to put on their tassels.

Unfortunately, the Sugar Dogs corn isn't goign to produce very well – if any.  I left them in the small starter planters way too long (about three weeks) and this was enough to stunt them and make the corn think they were robbed for nutrients and space.  The Sugar Dots corn ranges in height between two feet and four feet tall – and the tassels have already emerged on them and pollen is coming out.  So, it is quite a shame but over 90 of the corn plants are not going to produce – but we should get about 50 cobbs out of the Peaches & Cream.

While I can't speak for the flavor of Peaches & Cream yet, I still think it is going to be worth the extra cost of purchasing the Sugar Dots corn online – since it isn't sold around here any longer.  The flavor was fantastic and each stalk put on two ears of corn.  So, it is basically getting double the production out of the same amount of area.  Time will still tell for the Peaches & Cream corn since I don't see any spot on the corn where the ears will emerge yet. 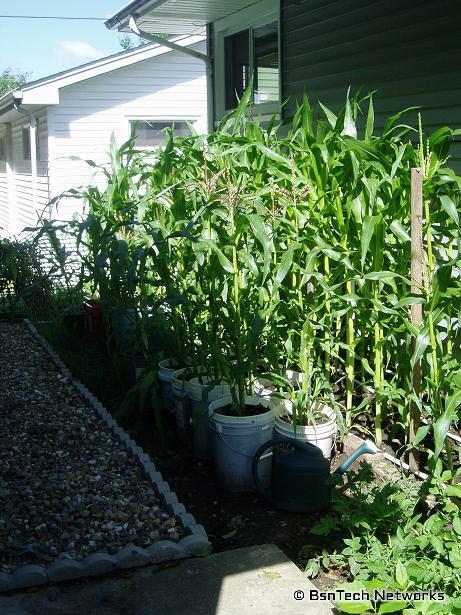