Been several weeks since the last post!  Just crazy things going on – as with anyone.

Last week, I slowly went through the garden and got the weeding done.  Had to pace myself a little at a time because they were already getting overtaken by weeds.  A job that no one likes to do!

So these photos were all taken on the 21st of May even though it is now the 25th when I am posting.

First up – the lettuce.  We have a problem.  Just cannot win for losing.  Last year, deer obliterated all of the tomatoes and green beans in the front garden.  So, seven-foot deer fencing was put up around it.

Now this year, we have something eating the lettuce. The lettuce is now worse than what this picture shows.  Just yesterday, my wife said it looked like a wood chuck or a beaver was eating the lettuce.  She saw it when she was leaving the house (since this bed is just by our back patio).  Deer netting was already put around this bed, but it is just going right under it. 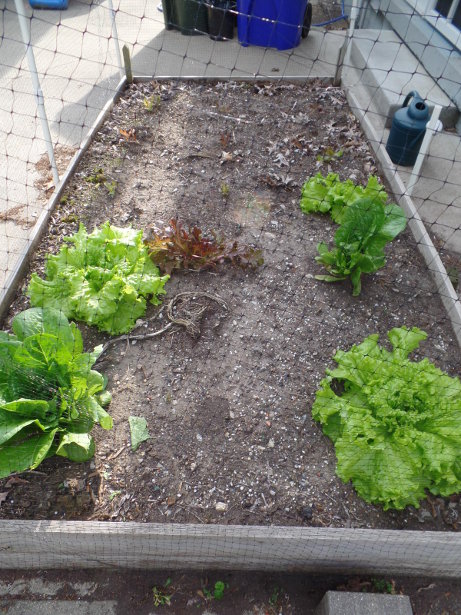 And now, just this morning as I was heading out the door, I looked at the peas.  The peas are pretty much a total loss.  Granted, I did not put any kind of protection around them – but they are between the garage and the house.  So the picture below show the peas in good shape, but they have been eaten at least half way down now. 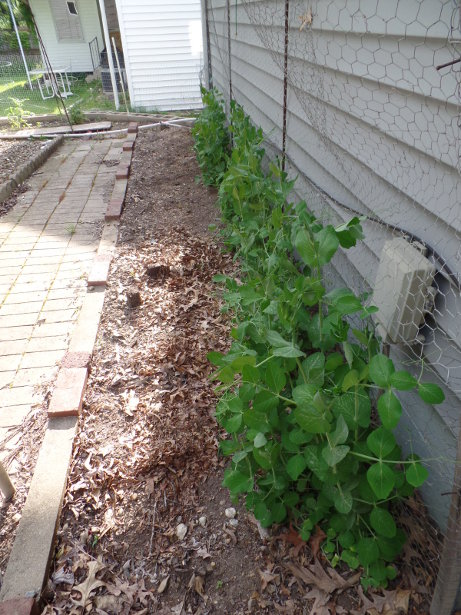 What a shame.  Just every year, we have a new animal that gets into stuff it seems like!

Anyways, moving to the back garden.  The tomato plants don’t look great.  Behind the garage, it gets sun in the afternoon – maybe after 1 or 2 pm.  So, they are most likely not getting the light they need.  But hey, I didn’t just want to throw the plants out since they were usable – but I had no other place to put them. 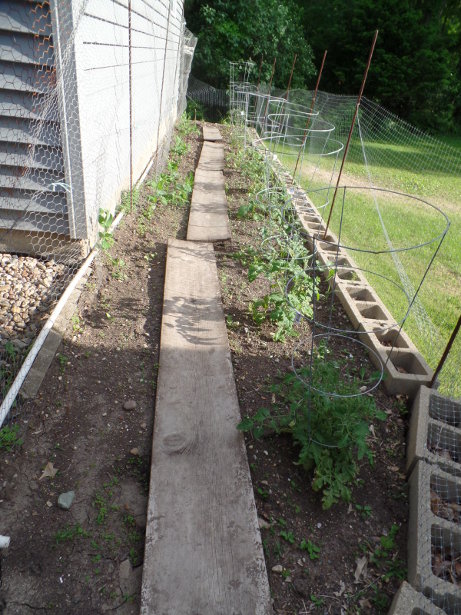 Over in the bed where the carrots typically grow, the onions are doing very well – much better than the onions planted in the front garden!  Just seems like they are growing faster. 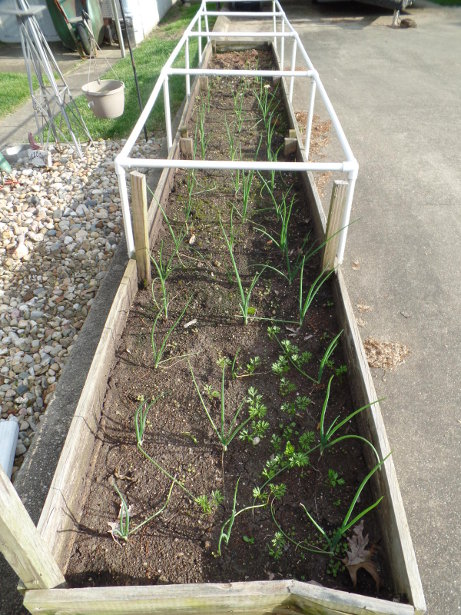 Here is what they look like in the front, where I plant them year after year.  A lot more too – 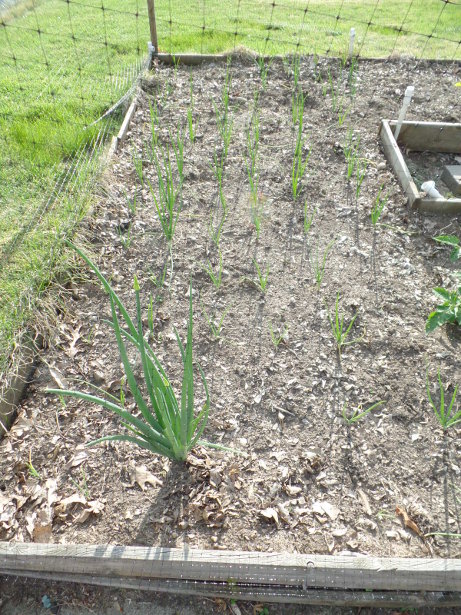 The big one right in the front was an onion that came from last year.  I must have left something over and it started sprouting in the spring.  Definitely a lot larger than the others that were transplanted into the garden.  That makes me really wonder if I should just starting seeding the onions directly outside based on how well this one came up.  But, I’ve had such bad germination rates with onion seed that there will be lots of missed spots I fear.

OK – the overall view of the front garden: 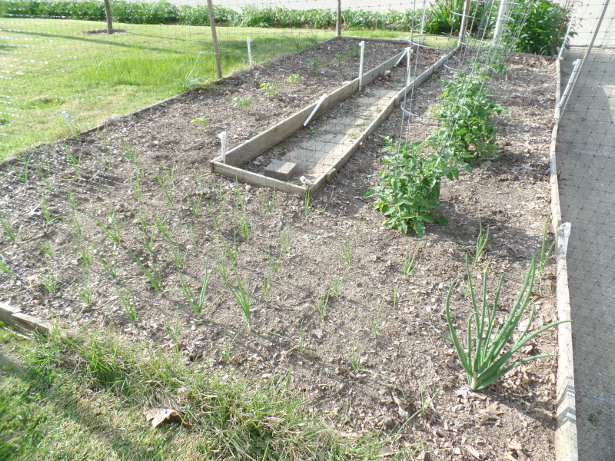 All nice and clean eh?  Yep, a lot of weeding to get all of this cleaned up.

The row of peppers are not growing very well and look ill.  I need to possibly get some epsom salts added around the plants since I’ve read that it does great.  And the one year that I did add epsom salts around peppers, it did seem like it made a difference. 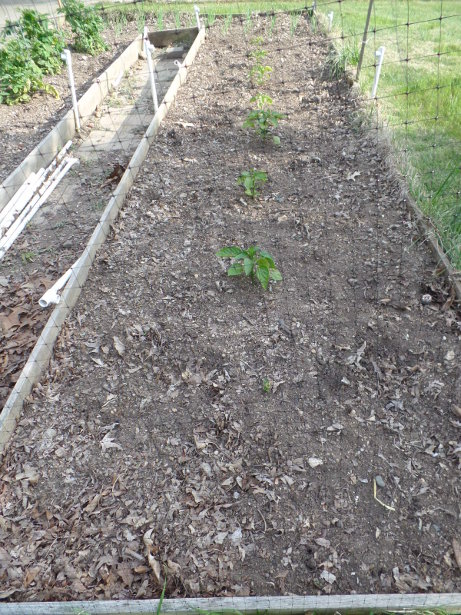 Tomato plants in the front garden are doing very well: 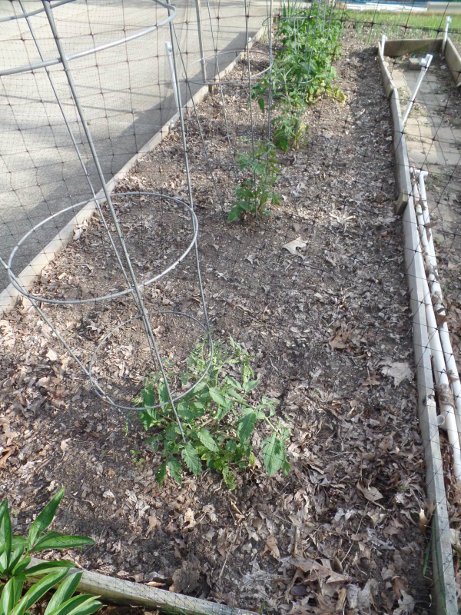 Just last night, I did get the green beans all planted.  I didn’t know if I would ever get them done, but I forced myself to get out into the garden last night so they hopefully will germinate now.

Next up – potatoes.  This weekend, I got the potatoes all ‘mulched’.  I keep a couple of large containers of mulched-up leaves and grass.  So it was all spread under the potatoes to help keep moisture in and prevent green potatoes. 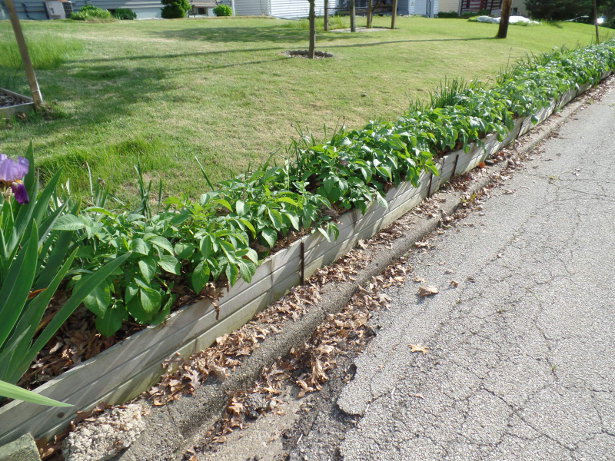 And lastly for the ‘other’ section for the garden that is out year-round – flowers and fruit!  The peony in the front has finally opened up with some nice, large pink flowers.  When this picture was taken, they were just ready to pop out. 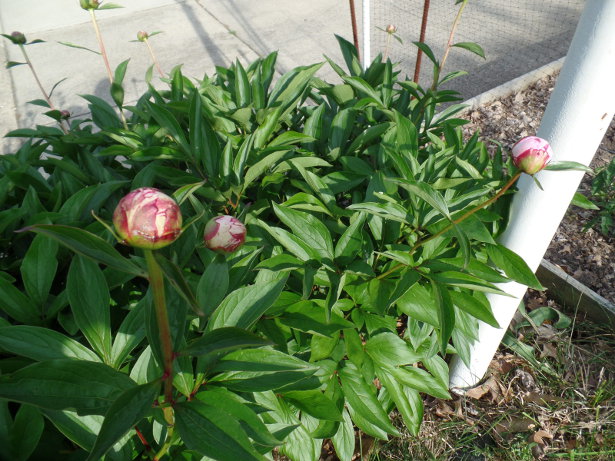 The Iris plants near the driveway and road were very pretty for about a week or so.  But just in the past couple of days, they have already shed all of the flowers.  Just as one flower goes, the next one comes up. 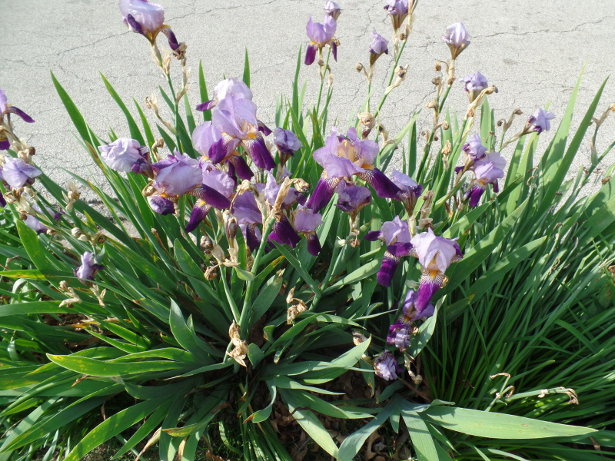 And lastly, it looks like we may get a few Granny Smith apples this year.  They are up high enough so the deer cannot get to them.  Here are a few that are in the beginning stages. 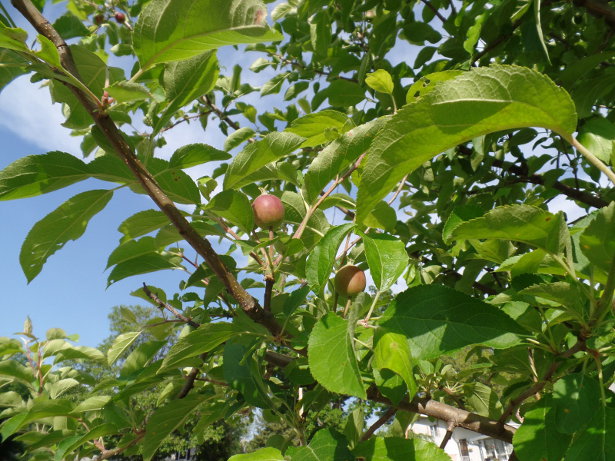 That does it for now.. until next time!