In a sad turn of events, BsnTech Networks had to file a small claims case against a customer from back in July.  In July, we were contacted by Barclay Jackovich, owner of MyRCDepot, LLC out of Uniontown, OH.

Barclay contacted us to make an eCommerce website that was pretty intricate.  We provided him an estimate for the site.  During the design of the site, there were other requests and features that he wanted that were not originally part of the estimate, but he agreed to the extra charges.

Upon completion of the website, we agreed to split the invoice into two parts per his request.  When the time came for payment, he contacted us and said that the bill was not correct and wanted to have us explain the charges.  After we explained the charges in full detail to him, he agreed that everything was correct and said he would have his accountant send a check to us.

It is the policy of BsnTech Networks to suspend websites upon non-payment.  Additionally, we give a four day grace period after an invoice is due before a website is suspended.  That way it allows for additional time in the event a check is mailed at the last moment, although BsnTech Networks should be receiving those payments on the due date itself.

Although Barclay indicated a check was sent and confirmed to us on a few phone conversations that it was sent, no check was ever received.  Therefore, he had no intentions of paying for the site.

Upon the site being suspended, he immediately went to a different website designer and had them create a website for him.  Whether this designer was paid or not, that is unknown.

Today, we received word that BsnTech Networks won the lawsuit against Mr. Jackovich and MyRCDepot, LLC.

BsnTech Networks attempts to work with our customers as much as possible to help with payment arrangements for sites that are more sophisticated than our typical website design package.  In this case, we did just that, but the customer was not honest with us.  Barclay paid the initial pre-payments for us to start on the site by credit card, but would not pay any of the final balances for his website. 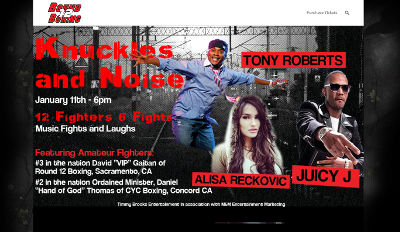 Timmy, the owner of Round 12 Boxing, contacted us a few weeks ago to make website to help promote an event that is upcoming for his boxing business.

One of our website design freelancers opted to take on the project, so we assigned the work to him.  We were able to get the website completed and up and running in just a few weeks after all of the information was received for the site.

We appreciate the business from Timmy for entrusting us to make an affordable website design for him! 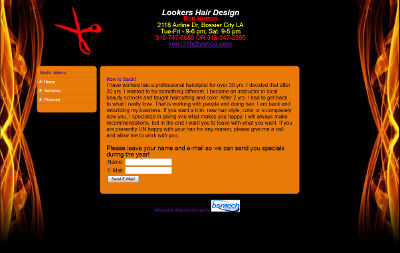 Ron Horton contacted us a few weeks ago regarding the creation of a low-cost website.  Ron has over 30 years of experience as a hair stylist and used to own his own business.  He then sold out to a family member and started teaching for a few years before deciding that wasn’t for him.  He then went back to work as a hair stylist at a local salon in Bossier City, LA where he rents a booth.

Ron is hoping to reach out to some of his previous customers to drum up business and he wanted to market himself by getting a website online.

Originally, Ron attempted to make a website himself but didn’t have much luck.  He then had us set everything up for him.

He sent us the specifications, content, and information that he wanted on the website in addition to how he wanted the site designed and colored.

We put all of his information together and had his site done in just a few short days after receiving everything!

Thank you for your business, Ron, and we look forward to helping you with search optimization needs! 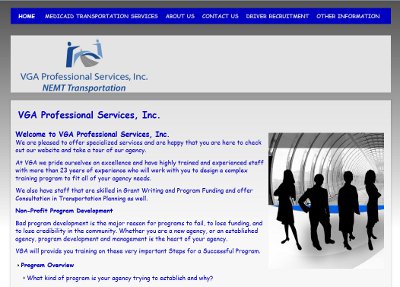 BsnTech Networks was contacted by Vernita, the owner of VGA Professional Services, Inc., several weeks ago to make an affordable website design for her and her business.  Vernita also requested that we make a high-resolution logo design for her as well.

Our graphic designer got to work right away on the high-resolution logo design and had it completed within a week.  Vernita was exceptionally pleased with the fast turn-around time with our graphic design services.

The website for VGA Professional Services, Inc. just was approved by Vernita – and she is very happy that she can go in and manage her own website and make changes to help keep her cost for the website design low.

We appreciate the business from Vernita, and she noted that there will be referrals coming our way! 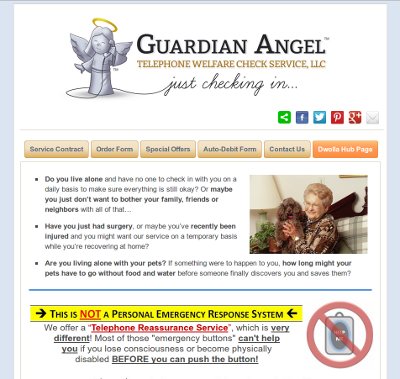 Christopher, the owner of The Guardian Angel Telephone Welfare Check Service, contacted us last week needing help with making some changes to his website.  After a few e-mail exchanges, he sent us the needed informatoin needed to update his website.

Upon inspection of his website, we found out that the website he had designed was a proprietary, custom-coded website that was “complied” using “ASPX” – or Active Server Page – technologies.  Because his previous website design company uploaded the compiled code to his web hosting server, it essentially locked all other web designers out from being able to update his website.

Christopher insisted that we continue to help him because of our great rates and excellent communication that we provided to him.

A few days later, Christopher sent us a note back saying he went down to the website design office and spoke with the Vice President demanding a copy of the code that would allow anyone to be able to make changes to his website.  His persistence paid off because they turned over the “source code” of his website.

We were then able to get to work right on the website changes he requested.  In less than 12 hours, we had the changes made to his website that he requested.  A couple of minor changes were needed here and there, but overall, the entire process and all of his requested website updates were done within 24 hours.

Christopher was very pleased with the response time and says that he will be having us make any and all changes to his website going forward. 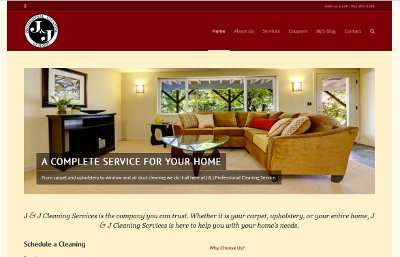 Our website design freelancer did a great job creating a website for Eugene and had it completed just a few days after Eugene provided us the information for the website.

We appreciate the work that our website and graphic design freelancers do to make BsnTech Networks a success.  Providing our customers with reliable, fast website design services with courtesy and great pricing.

The J & J Professional Cleaning Services website is at jjcarpetclean.com. 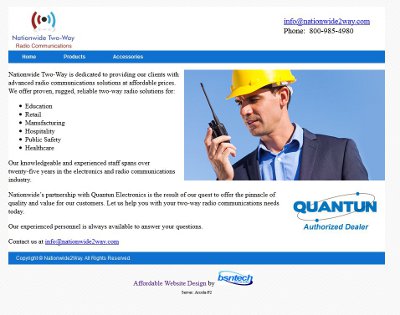 Paul, the owner of Nationwide2Way, contacted us several weeks ago about website design information.  He gave us a couple of sites to look at to compare with what he was looking for.

Based on Paul’s budget, we did have to cut back on the options and features for his website compared to the other sites he provided us.  The other sites were feature-rich with online catalogs of products, login forms, contact forms, slideshows, social networking integration, and much more.

After we received the initial payment from Paul, we got to work on the site and had the content and design done in a few days.

We appreciate the trust we received from Nationwide2Way with the creation of a budget-friendly small business website design service! 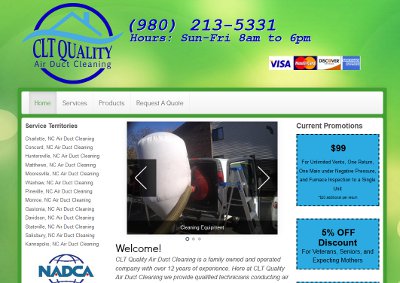 Mark – the owner of CLT Quality Air Duct Cleaning – contacted us a couple weeks ago to start on a website.  In addition, he awarded us with extra business to create a vectorized logo for him.

Our graphic designer completed the graphic a few days ago, but Mark just approved of the website that we created for him.

Mark wanted a stylish website that looked clean and gave a fresh feel.  We setup all of the pages and added his content.

Mark was very pleased with our work and how quickly we responded to his requests.  Unfortunately, Mark had a bad experience with another web designer just before he contacted us – and they didn’t give him his domain name nor any refund.  BsnTech Networks took care of everything and made the process streamlined.

We appreciate the trust that Mark at CLT Quality Air Duct Cleaning placed in BsnTech Networks to create a small business website design for them. 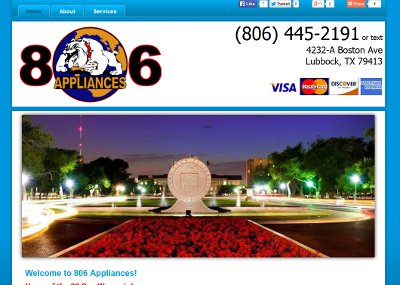 Shortly after we completed Art’s logo, he gave us the final approval of the website we made for him.  Art is the owner at 806 Appliances, a local appliance dealer around the Lubbock, TX area.  He sells new, used, and scratch-and-dented appliances.  Art also served in the Marine Corp and puts the values he learned into his business operations.

Art was very pleased with the service we provided him, and went on to say “I will definitely use ya again and send any business your way”.

Mark, the owner of CLT Quality Air Duct Cleaning in Charlotte, NC, contacted us a few weeks back to create a website for him.  In addition, he wanted to also have a professional logo design completed that would allow him to use the logo for any purpose.

That means he needed a vectorized logo design – which is one that does not lose quality as it is scaled or resized to any size.  They can even be used on billboards with no loss of quality.

Our graphic designer was able to create a logo right away that met Mark’s needs and expectations.

We still are working on Mark’s website but will have it published soon as well.  He is wanting to have a website that details all of his services available – and one that looks exceptionally pleasing to potential customers.