It has been a few weeks since the Ventura Celery was planted.  Well, they just are not doing well.

I looked at the packet of Ventura Celery seeds that were purchased from FedCo Seeds -and discovered they date back to 2010.  Wow, the seed is over six years old!  Initially, about four of the six cups had one celery plant seedling that sprouted.  But, one didn’t make it.

This weekend, I went ahead and planted three more seeds in each of the three cups that no longer had a viable seedling.  There are two that are doing well but the third one may be suspect as well. 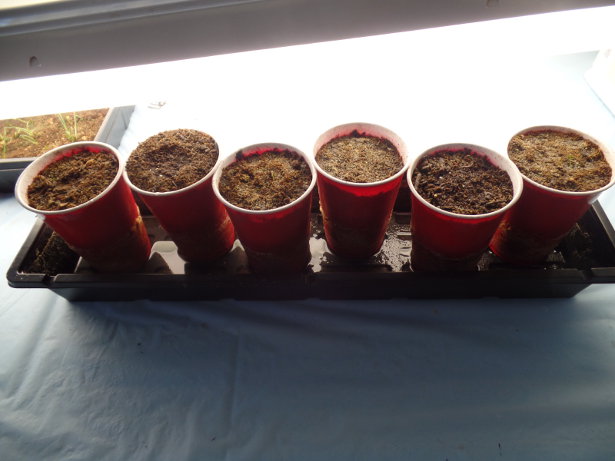 The above shows all six cups.  You can’t see any of the sprouts from that view because they are so small.  The black tray the cups are sitting in was completely filled with water a week ago.  Now, all of the water either evaporated or was pulled up into the cups.

The new Ventura Celery seeds that were planted didn’t go through the usual soak treatment that I do with them; I just put them in the soil and put a very light dusting of soil over the top of them.  From what I’ve read in the past, celery seed need light to germinate.  When I first started celery seeds, I experimented and found out that it did seem germination was better when they were pre-soaked and put on top of the soil and not covered up.  So this time, I did just the opposite.  We’ll see what develops from this six year old seed.

Well, what about the Red Bull onions and Copra Onions?  The seed used here was two year old Copra Onion seeds and one year old Red Bull onion seed.  No idea which onions have sprouted since they were all put together.  Last week, I also re-seeded a lot of spots.  As you can see in the tray below, the left side is almost completely empty – whereas the right side has a lot of sprouts.  Really odd behavior.  On top of that, the sprouts on the left side are not going to make it; they look pretty pitiful. 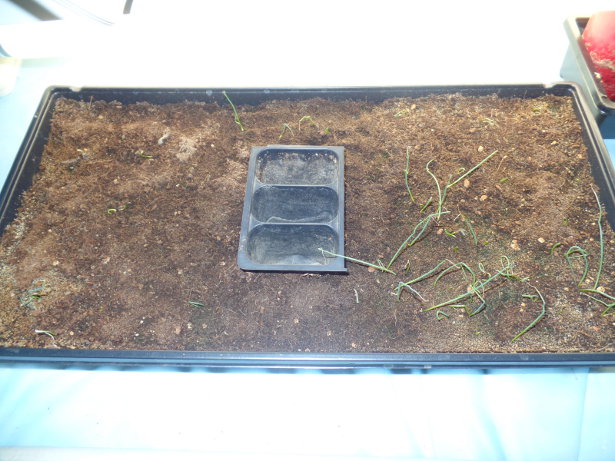 I attempted to try and pick up a few onions and relocate them – but that failed.  The onions are still way too small to be able to even pick out with a spoon.  Unfortunately, a lot of them are growing right on top of one another.  That means I am going to have to thin some out and I’m going to lose some viable onions.  I need a good 60+ onions to plant in the garden each year but I certainly don’t have that amount in the tray. 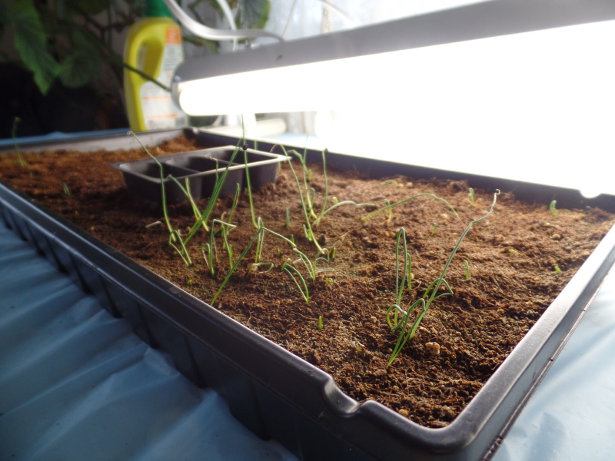 So, things are not off to a great start this year.  Onion seed simply does not germinate very well if it is over a year old.  I knew that going into it – which is why I put down the entire packets of seed.  Probably 300+ were planted.  I’ve not had a great deal of success with getting decent germination rates out of onions.  But if you purchase the onion sets, they will not grow to bulb out nearly as well as those from seed.  Strange since the bulbs are significantly larger, but that is due to the onion sets really being a second year onion and most of the time will “bolt” and put a flower head out.