Columnar apple trees?  What are those??

I did some digging on how I could potentially put more fruit in the front yard.  I started to come across these things called 'columnar apple trees' on Google.  There are a few varieties of these type of trees.  Basically, the columnar apple trees grow vertically up – and put off really short branches that may be 1 – 2 feet long.  If kept properly pruned, then it could look like a giant shrub in a way.  Columnar apple trees have been noted to grow in pots, but the yield of apples will be less in this manner.

With these trees, you can really see where the graft was established.  On the Granny Smith tree I bought earlier, there was no graft line that I could see although it was put on a semi-drawf rootstock.  The two columnar apple trees have an M7 rootstock.

Here is the full setup of the fruit area in the front yard now.  The two columnar apple trees were put in front of the layout.  It looks as though the apple trees were placed pretty far apart, but they were actually placed directly in a line with the posts of the arbor – so they are about six feet apart.

In addition, I planted all of the tri-star strawberries in the strawberry pyramids just behind the arbor.  I was able to fit 24 strawberries in each although I think it is a bit too many.  The bottom of the pyramids are four feet wide, and at one foot apart per plant, a total of 12 should fit at the bottom.  The middle is 3 feet wide and should accomodate 8, and the top holds 1.  So that is only 21 strawberry plants.  But, I put three additional plants at the bottom of the pyramids so there are 15 in the bottom.

Apparently the nursery also sent me an extra strawberry for each pack of 25 as well.  I had four left after planting the 24, so I just put those in the back garden area for the time being – in case one up front doesn't make it then I can change it out.

They aren't too much to look at now, but I hope they bust with growth!  I chose the tri-star strawberries because the U of I extension site recommends them and they are also a 'day neutral' strawberry.  The day neutral strawberries do not produce as many runners as the other varieties of strawberry, which was a good thing for me.  In the small area for the strawberries, I didn't want little strawberry plants popping up everywhere.  Although having a few runners each year will provide me some additional strawberry plants each year.  The plants are only good for three to four years before they need replaced because they slow production.  On the other side of that, newly planted strawberries need to get a good root system going before you should allow them to produce.  For day neutral, they will produce two harvests of strawberry (another plus).  So since I just planted them, it is recommended that they not produce for the first harvest, but we can let them produce for the second harvest.

In addition to receiving the apple trees and strawberries, I took a gander at the back garden area and noticed I saw some green beginning to appear.  It is very odd, but there are three peas that I saw just peaking out of the ground!  Seems they started about four – five days early compared to what I was expecting.  In addition, these three peas that sprouted were the three peas that I planted first as well!  I planted all of them within an hour period of each other (100+ of them), but the very first three that I sowed are the ones that have peaked up so far. 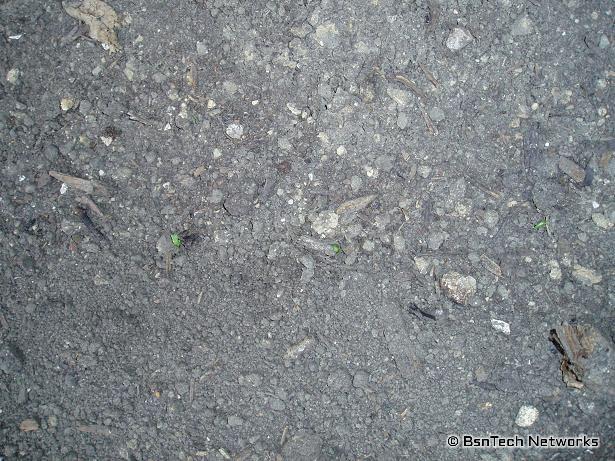 It is a bit hard to see, but you can see three little green colors in the above picture.

Inside the house where the seedlings are growing, I am fully out of space for putting anything else under the fluorescent lights.  For that reason, the three original lettuce, three broccoli, and three cauliflower were all planted outside yesterday as well.  I took the plastic cover off of the front garden bed and was not too happy to see – what appeared to be – thousands of weeds!  On the forums at GardenWeb, I was told that the horse manure mix from the compost facility would most likely have quite a few weed seeds in the material since horse digestive systems don't break down weed seeds.  Well, I was outside picking the weeds for at least an hour, and I probably have about half of them picked.  I can tell that I will be busy all summer pulling these weeds out which I am not looking forward to.

So overall, a pretty busy day out in the garden yesterday.  Apple trees planted, strawberries planted, a few peas sprouted, and transplanting of broccoli/cauliflower/lettuce into the front garden after picking a lot of weeds!