This post is factual evidence based on our communications with an individual.  The pictures below are screen shots taken from a computer at BsnTech Networks showing email history and email communication with the individual.  In addition, extra evidence of the actual Microsoft Word documents and PDF files provided are available below to support the factual data.

Craig Brown of Camden, Maine is entangled in a lawsuits in his hometown.  His believes that the police station, surveying crews, developer, and neighbors are all conspiring together regarding his property at 36 Stonehurst Drive in Camden, ME 04843.

Because of this, he also mentioned that he had to hitchhike back and forth between his home in Camden, Maine and his secondary address at 904 Cripple Creek Drive in Austin TX 78758.  His claim was that the local police had placed GPS trackers on his vehicle so they could monitor his whereabouts and so he had to hitch-hike completely across the country.

Craig contacted us on September 27th, 2018.  He was asking for assistance getting a website created to help support his cause and to bring public awareness to it.  The domain name that he reserved and setup at GoDaddy is realestatefraudamicacamdenmaine.com. We responded promptly by asking him what kind of help he needed and this was his response:

Immediately with him saying that he would not pay until the site was finished was a red flag to us.  It has been the policy of BsnTech Networks to always require some kind of good faith pre-payment before we start on any work because we have had our work stolen in the past.  However, Craig Brown seemed to be having a hard time finding a ‘good’ web designer and so with us being a reliable and reputable small business, we wanted to offer to help him.

We agreed to start doing the work.  Before we started, we wanted to ensure a proper “scope of work” was defined so that Craig Brown from Camden, ME could not request more work from us or say that we didn’t complete the job.  A message was exchanged with this scope of work and he replied with one other page which we agreed to include:

Right after sending out this email, Craig Brown began sending us the pictures, documentation, and other material to add to the website.  The timestamp on the above email was October 2nd.  The following shows a list of the number of emails that he sent showing he was actively engaged in us getting the website going: 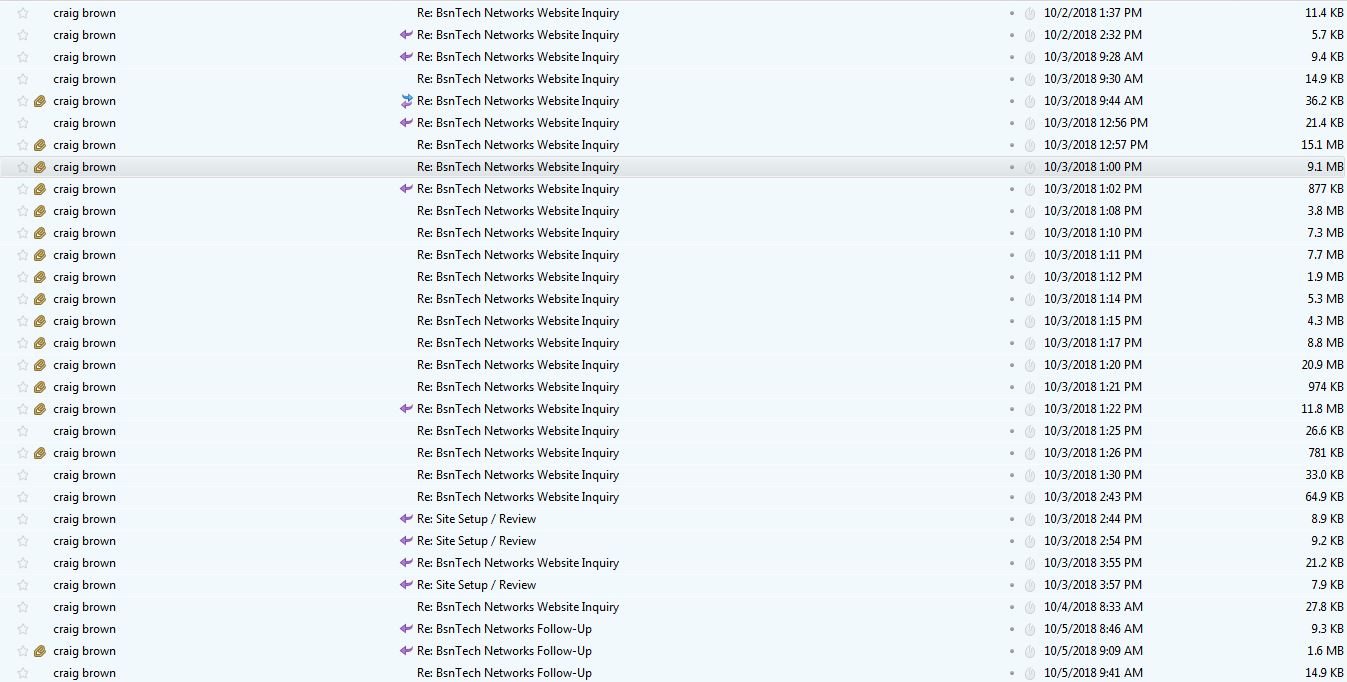 We had the majority of the website up within one day – and it was ready for him to review on October 3rd.  Right away, there was some argument about website details.  Craig Brown sent us “revised” Microsoft Word documents on October 2nd (document1) (document2) (see scope of work email above mentioning the revised versions) with the text he wanted on the site and notations for what photos should go where.  The material was copy and pasted directly from the  Microsoft Word documents and placed onto the website.  But in an email on October 4th, he argued that we did not do what was asked.  Therefore, we went back to old PDF files that he initially provided (which were screen prints from the website he stole from the previous website designer).  We then added in the requested pictures that were not mentioned in the updated documents but were on the older PDF files (which were provided on September 27th) (document1) (document2).  We also matched the paragraph alignment, font sizes, and tried to match the font as closely as possible.  All of which were not provided in the revised/updated Microsoft Word documents.

On October 4th, he sent a message indicating that the site was looking much better:

The next day – on October 5th – he sent two emails with requested changes that he wanted done to the website.  As it is noted below, Craig Brown of Camden, Maine sent several change requests.  With an email sent October 16th (see the second-to-last email picture below) when he tried to solicit another web designer), he claims that our work was ‘sloppy’.  However, you can see that in the two emails below – he is asking us to correct several sentences, grammar, and capitalization items.  We did this work promptly within an hour.

*** NOTE in the above email #2 on his list – he is asking for a Gallery page to be created.  This was not included in the initial scope of work and I believe this is what caused Craig Brown to stop responding to our messages.  As was mentioned in an email to Craig Brown on October 16th, you cannot walk into a dealership and agree on a price for a Chevrolet and then tell the sales man that you expect a Tesla for the same price.  This is precisely why a “scope of work” email was sent to establish those boundaries.

We responded back to Craig Brown regarding the Picture Gallery issue:

As you can see, we offered to compromise to create the page if he only had up to ten photos without captions.  But this is when Craig Brown of Camden Maine went silent and did not respond.

And the final email we sent that day regarding the completion of his second round of changes and it was mentioned about a spelling issue in his second email message which we caught and corrected (see the email picture above, line #4).

No other emails from Craig after October 5th.  We attempted a follow-up email on October 8th and also again on October 9th.  The email on October 9th stated that we needed a response from him otherwise the website was going to get taken down.  Afterall, we were not going to allow Mr. Brown to steal the majority of our work either. Craig Brown was readily communicating with us quickly and several times a day (as seen by the picture of the messages he sent above).  And after the 5th of October, he stopped responding.

Therefore, we took the majority of all the data off the website on October 11th although we left the files in place.  By waiting until October 11th, we allowed him a few extra days to respond in case he was traveling or was sick.

On October 16th, he responded to one of our advertisements in Greenville, SC that was completely out of his area in Camden, Maine.  In one of the first emails he exchanged with us, he asked if we were local and wanted to sit down with someone.  Obviously Craig Brown was being dishonest since he blatantly responded to an ad in South Carolina.

If you notice in his message, he has a “website partially set up”.  That is because he stole the work that we had already completed and left intact on his hosting account.

We responded to this email and Craig Brown’s response was:

As you can see, Craig Brown of Camden, ME calls us out on four points – all of which were completely false.

#1 – He knew that the website was created in WordPress per the specification.  He deleted our account and left remnants of all of the files we uploaded in place.

#2 – He is mentioning that the features were not all there.  Note the above emails where he requested a picture gallery after the fact and it was not included in the scope of work, nor was he willing to compensate us any more for it.

#3 – He mentions about us ‘making noises’ about upping the price.  This was clearly due to him requesting additional work and features that were not included in the scope of work.

He also said that our work was ‘sloppy’.  All of the work we did was completely copy and pasted directly from his Microsoft Word documents that Craig Brown provided us.  There was no ‘manual typing’ of any kind on the web pages and therefore any errors in the written copy came directly from the material provided. As you can see in the previous emails posted here, he sent two messages asking for grammar, capitalization, and sentence changes.  This further provides evidence of the issues within the documents Craig Brown provided.

#4 – Craig Brown of Camden Maine mentioned the two edits and said we failed to complete them accurately.  If you look at the other emails above we responded to both of his messages with the changes that were completed.

In the end, Craig Brown is an individual that you do not want to do any form of business with.  We lost at least five hours of uncompensated time working on his website project. Since he was unwilling to put down a good-faith pre-payment showed that he is looking for someone to complete the website, block them out of it, and steal the work – much like he has done to us.