This week was exceptional with the weather.  That is just how it is around Central Illinois during some parts of the season!  The weather last weekend was very nice.  Then, throughout this week, we saw well over three inches of rain.  It seemed to rain almost every single day of the week.

By the end of the week – on Friday – we woke up to very tiny ice pellets or hail.  The temperature was about 42 degrees out in the morning and about 44 degrees out when I got back home.  I took a picture of what it looked like after we had a good 10+ minute downpour of these “ice pellets”.  It was certanly something odd to see. 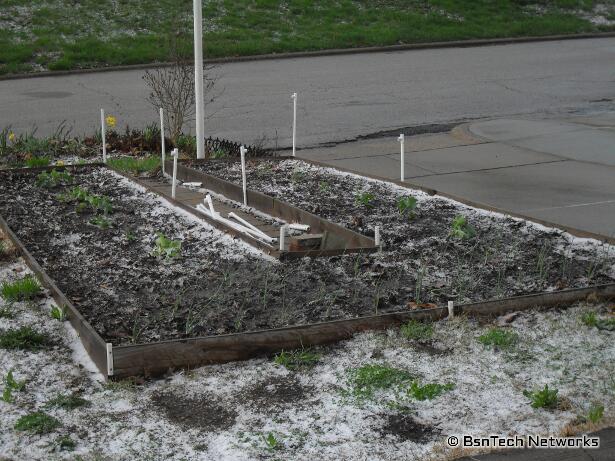 Also this week – the temperatures flirted with the freezing line.  It got down to about 32 degrees Friday night into Saturday morning.  Unfortunately, it did cause some damage to the broccoli and cauliflower plants out front.  Here is a picture of a broccoli plant with a little bit of frost damage on two leaves: 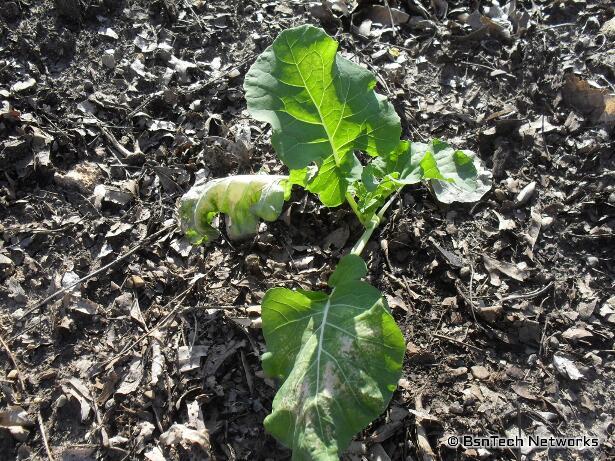 Another partial casualty of the week was the carrot bed.  There are a few carrots that have managed to sprout – but because of the large amount of rain that we had, it caused some runoff of some of my great, well-screened soil in the carrot bed.  I guess that means I’ll have to add some more screened compost to the bed. 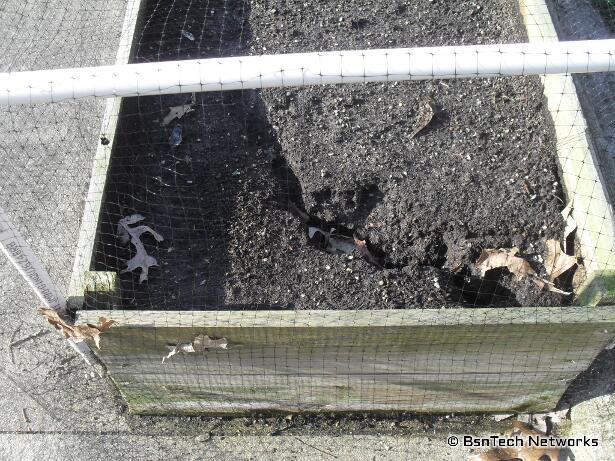 On the brighter side of things, there were some developments in the garden.  One such development is some volunteer Kennebec potatoes that came up in the side garden.  They poked out last week – but they still are going strong.  I just wonder if they’ll make any large potatoes. 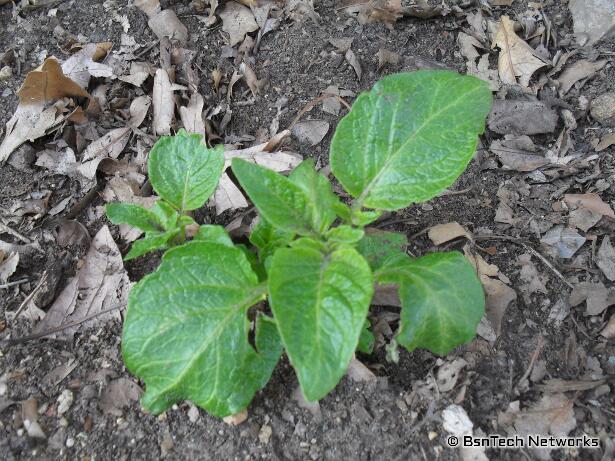 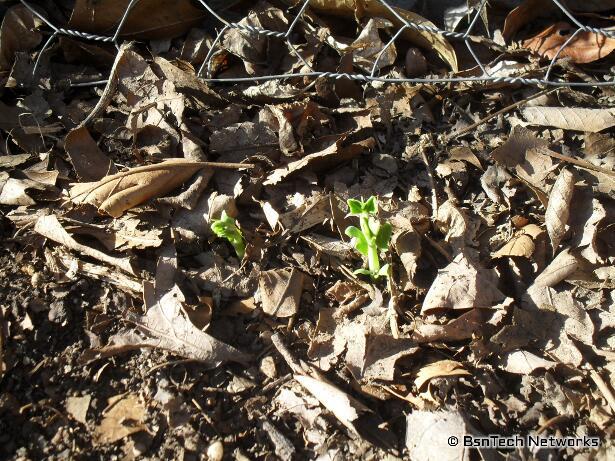 Over in the lettuce patch, they have been hanging on for life.  One has been trying to battle back from almost complete death.  It is hard to see in the photo below (looks like a leaf almost), but at the bottom right, there is a very small lettuce plant that is trying to come back to life.  With the amount of rain that we got, I certainly thought it was going to drown out the little fella. 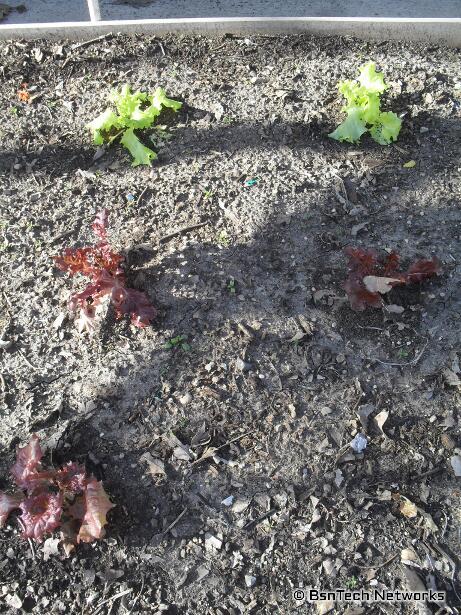 Next – over by the old strawberry pyramids, I planted the Ventura Celery – and also seeded in some Easter Egg Radishes.  I was concerned about how deeply I planted the radishes – but to my disbelief, almost every single one of them have sprouted in both pyramid beds!  Below is a photo of one of the celery plants with a few radish seedlings just below it: 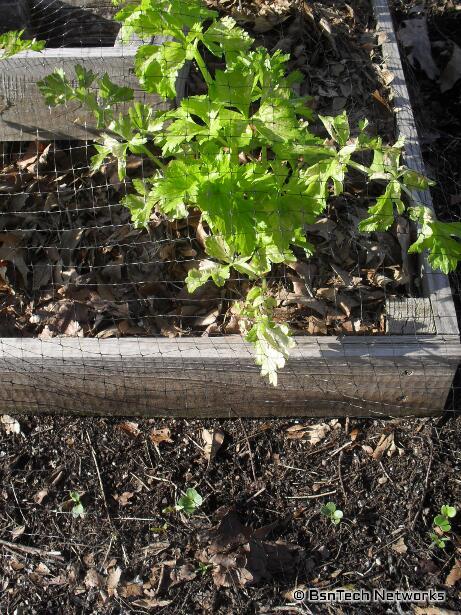 And for the final picture – it is the germination station.  The tomato plants are getting to be exceptionally too large to stay in their small containers – and under the lights.  Unfortunately the weather is not cooperating – so I cannot plant them outside.  The pepper plants are also doing mighty well – and some lettuce is also inching to get transplanted outside. 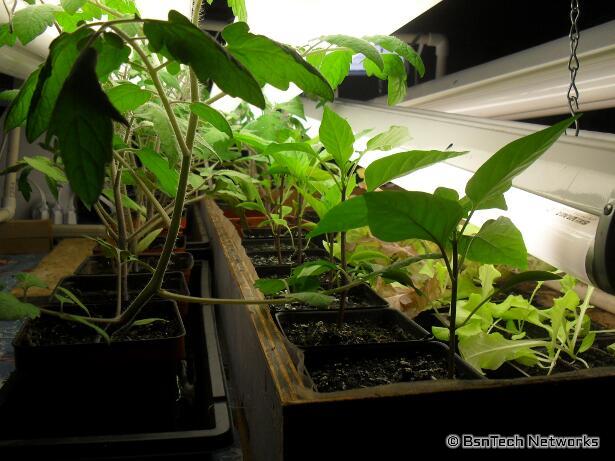 One final thought to close out – and that is regarding damping off and how to prevent damping off.  Over the years, I have been trialing some methods to prevent this.  My first year where I was using the germination station (probably back around 2008 or 2009), I was watering all of the seedlines from the top of the containers.  You know – each of the containers that you put the seeds in – whether they be peat pellets, the black six-packs, etc.  I was having such a bad time with some of the plants just dying – and never could find out why.

Well my discovery was something called damping off disease – and it does happen to a lot of gardeners out there.  The solution to the problem – and it has worked very well for the past couple of years – water from the BOTTOM, not the TOP!  I put all of my seed trays in larger black containers – as seen in the above photo on the left.  The tomatoes are sitting in a square planter – and the square planter is then in a larger black container.  I then fill these larger black containers with water.  As the plants need water, they suck the water up through the bottom holes in the planters.  This keeps them very well hydrated – and prevents any water from being done directly to the top.

Since I’ve began using this, damping off has almost been completely eliminated.  This year, I only lost a couple of Copra Onion seeds – somehow a green moss starting growing on the top around the onions – and it did cause a few casualties.  However, I didn’t lose ANY other seedlings this year.  Everything worked well.

The celery also loved the fact that water was always available.  They seemed to suck up a good amount of water every week – and I had to replenish the container with water.  Celery certainly need a lot of water – and that was definitely shown by the amount they were consuming each week compared to the other containers.