After hours of work, the curb appeal project is mostly completed!

Over the past week, I was working at removing all of the zoysia sod from the curb along the driveway and road to make a flower bed.  It is about 60 feet of total length and the bed is two feet wide – so 120 square feet of space!

Putting the aluminum flashing in wasn't so bad.  Why aluminum flashing?  I guess because I wanted to find the cheapest solution as a flower bed border – and something that would be deep enough to prevent the zoysia grass from taking over the bed.  You need to dig down at least six inches into the soil to prevent the rhizomes from the grass from getting past the barrier.  So I dug between seven and eight inches down – and left about two inches above the surface so it would be an easy edge to run the lawn mower by.

Then came filling the bed. 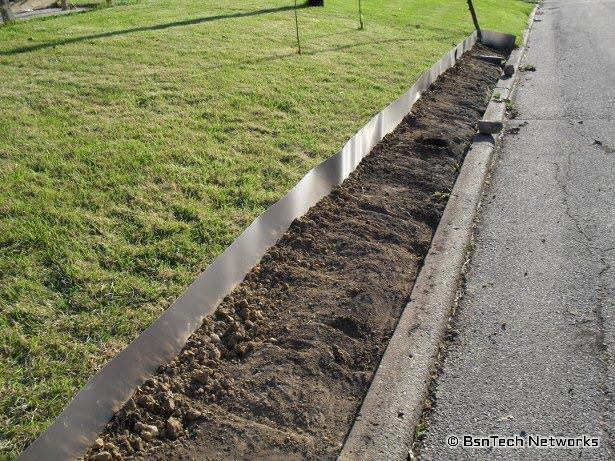 Just look at that nice aluminum flashing!  It cost about $37 for 60 feet of the "edging".  It is quite shiny and acts as a reflector along the road as well – but it doesn't look so bad now that it is mostly covered up.

After getting the flashing in, I needed to get the peonies fully planted.  We chose to put them at the entrance of the driveway.  it will allow the peonies to grow and not get into the road – but will overflow into our driveway a bit.  The little tree you see below is a Rose of Sharon plant and it has nice white flowers every year in the late summer.  This was planted a few years back – and another was planted in the landscaping beside the house.  To get everything planted, I had to make a trip to the compost facility for a car load.  I stopped by the owner's house (he lives right across the street) and gave him $20 for the dirt that would be needed to fill the whole area.  Still a lot cheaper than buying in bags – and this compost is a lot better than the top soil bags too! 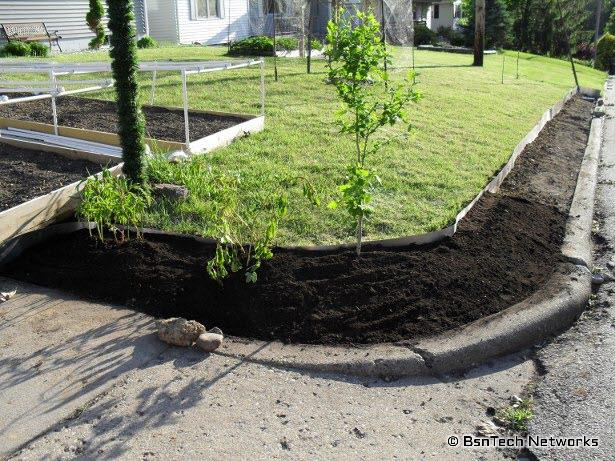 After the wife found out that I had the dirt in, she wanted to get her plants in the ground too!  It really makes it look good with the flowers and more life in the area.  Now – just multiply this by six – which is about how much more space we still have to fill in! 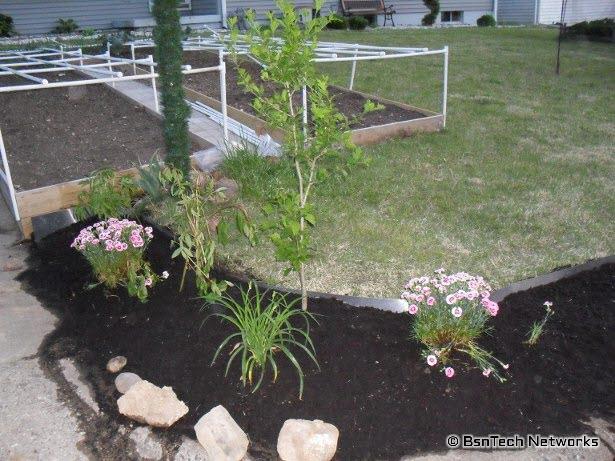 Monday after work I went to get another load of dirt in the car.  What a mess.  It was sprinkling a bit when I went and about half-way through, a full-out downpour!  I had quite the dirty car after I got everything loaded.  I then waited just a bit before it was dark outside to empty the dirt into the flower bed – even though it was still raining.

Tuesday was a perfect day to complete the flower bed.  I made three more trips to the compost facility (took five trips total with about 12 5-gallon buckets).

A few hours later, it was all filled in. 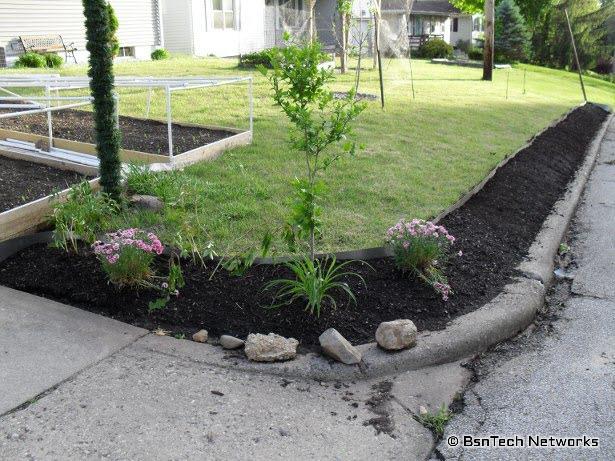 You can still see a little of the aluminum flashing standing out – which is just fine so it really acts as an edge.  I am debating about getting some edging to put along the curb.  What are your thoughts on that idea?

Lastly, I finished it off by spreading hundreds (maybe even thousands) of marigold seeds over the entire area – followed up by a good amount of "ornamental pepper" seeds.  I hate to just leave this space to get weed-infested over the summer and stay as black as the soil – so my mom gave me a lot of marigolds and ornamental pepper seeds.  What a perfect time and place to use them to get some color and interest going!

I'm not fully sure what the real name for the ornamental peppers are.  They are very, very small peppers that may grow up to 1.5 inches long.  They eventually turn red after being green (just like any other pepper) and one variety she had made purple peppers with purple foiliage.  I had to squeeze all of the seeds out of the peppers that she kept from last year and by the time I was done, everything I touched turned into spicy hot sauce!  By rubbing hundreds of peppers, the oils from the peppers embedded into my fingers for a couple of days.  Even any food I ate (such as pizza) had an intense hot/spicy tingle where I was holding it.

Anyways, here is a close-up of the area.  It is hard to see the seeds, but there are some marigold seeds that can be spotted below.  I had to them try to very lightly cover all of the seeds – which didn't get all of them (of course)! 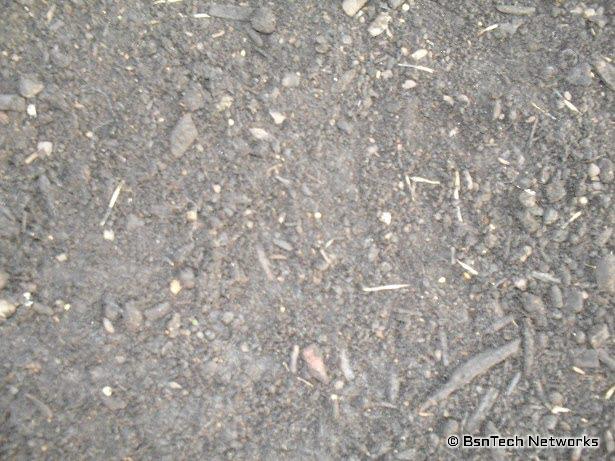 Well folks, I think that is ALL for the projects this year.  I've been doing so much between the making the rain barrels, expanding the garden, making a cinder block retaining wall, trying to keep the deer out of everything, planting/starting the seeds, and now finishing up the flower bed.  It is time to relax and enjoy the fruits of all of the labors.

The next project will be putting in all of the daffodil and tulip bulbs in the fall.  I'd like to reach out to folks who read my blog and ask what your favorite varieties of tulips and daffodils are for suggestions on what we'll plant!