This will be a long post – but mostly because the pictures.  A total of 28 pictures in all!  A little bit of narration – but will mostly be a picture blog this time.

First photo is the apples on the Granny Smith apple tree.  They've doubled in size since last week. 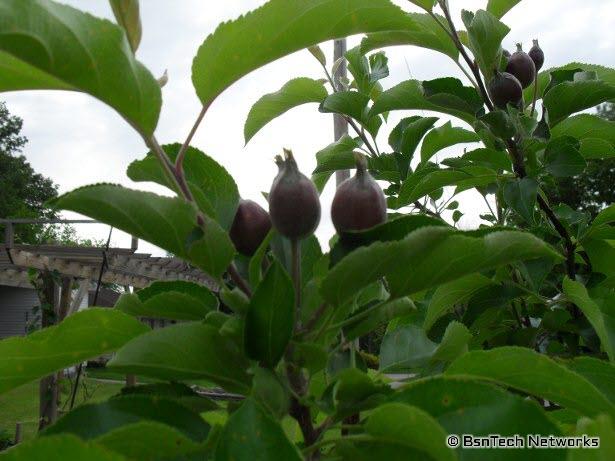 Here is the full grape arbor.  The grape vines are really bouncing back after the deer ate all they could before the fencing was put around the arbor.  The one in front is the Flame Bunch grape vine.  One in the back – which really can barely be seen – is the Concord Seedless grape vine. 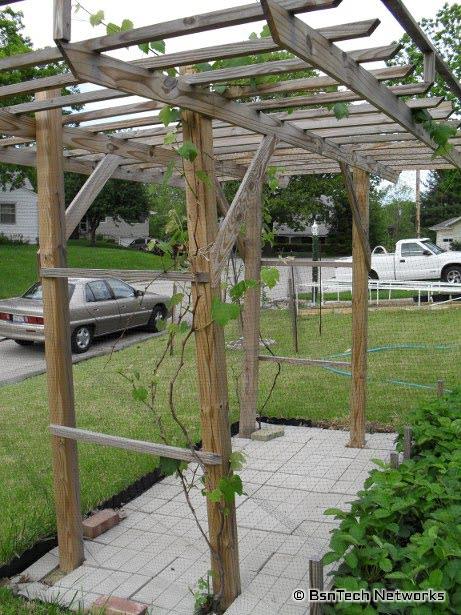 Here is one of the forming grape clusters no the Flame Bunch grape vine.  It is still very small.  There are probably seven or eight bunches forming on this vine.  The Concord Seedless isn't doing as well and seems to only have one small bunch. 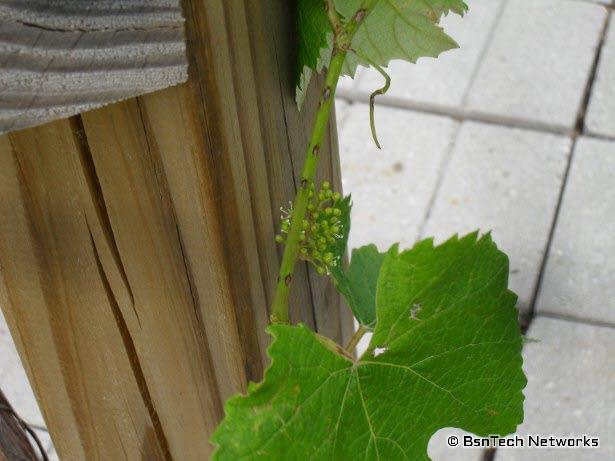 Just adjacent to the grape arbor are the strawberry pyramids.  Each pyramid has about 27 – 30 strawberry plants in them now since it is the second year – and there are some that grew in very close.  The strawberry plants are donig much better now that they are in their second year compared to last year when they were planted.  You can see a lot of red strawberries.  Over one pound was just picked yesterday and in a few days, probably another pound will be ready! 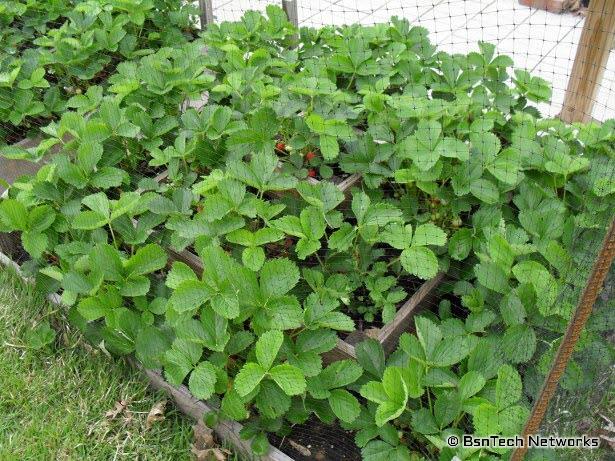 And a photo of both strawberry pyramids fully being taken over. 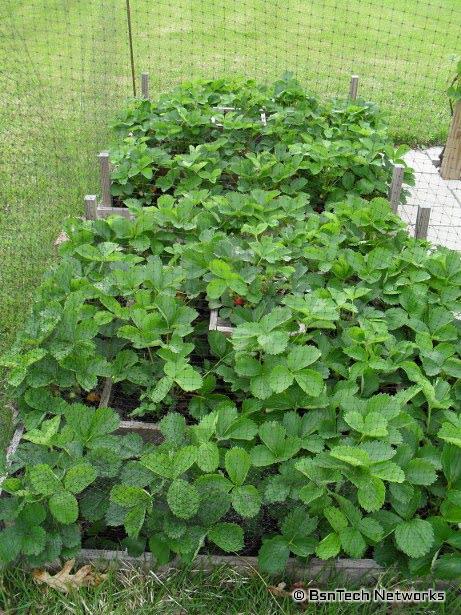 That takes care of the fruit in the yard.  Let's move on to the herbs now.

Today a few parsley plants poked their head out.  The parsley seedlings are still very small since they just sprouted. 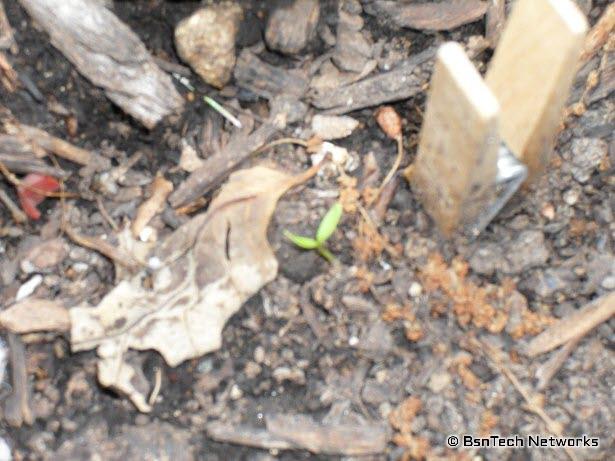 The cilantro is doing very well.  I planted two seeds per hole and I got up to FOUR sprouts!  Apparently there must be two seeds in each cilantro shell for there to be four sprouts.  I've thinned all but one sprout for each of the locations they were planted. 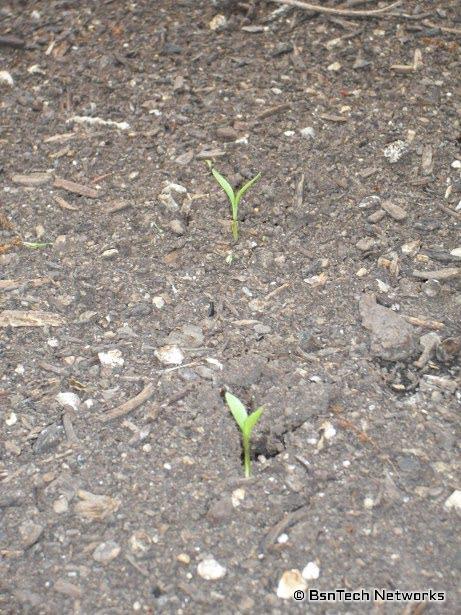 And lastly – the basil.  The basil is doing well and when I thinned them to one per hole the other day, I was absolutely amazed that even before the basil's first true leaves appear, the small ones have an amazing smell and aroma coming from them that transferred to my fingers as I plucked up the seedlings for thinning. 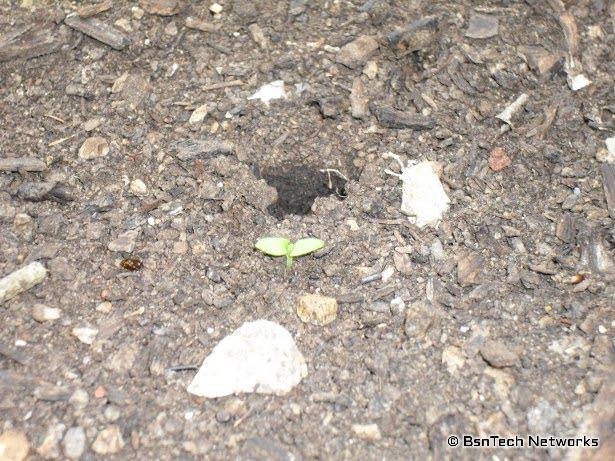 Now, let's take a look at the back garden. 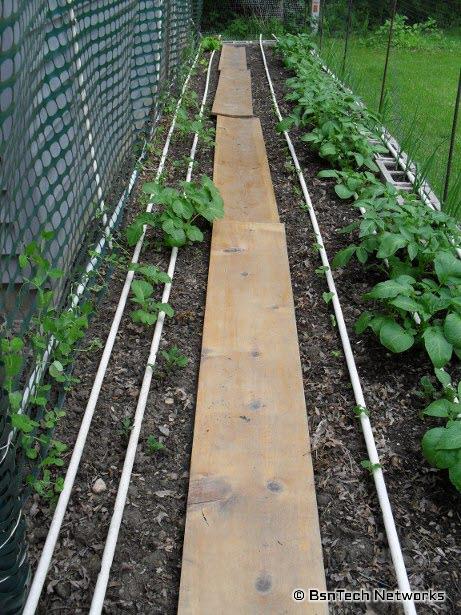 The potatoes on the right-hand side are doing very well.  All 26 of them sprouted.  On the opposite side of the boards, more potatoes were planted and then peas were planted against the green fencing.

The first PVC pipe to the right of the board is where the Greencrop green beans were planted.  So far about 31 of 50 have sprouted in 13 days. 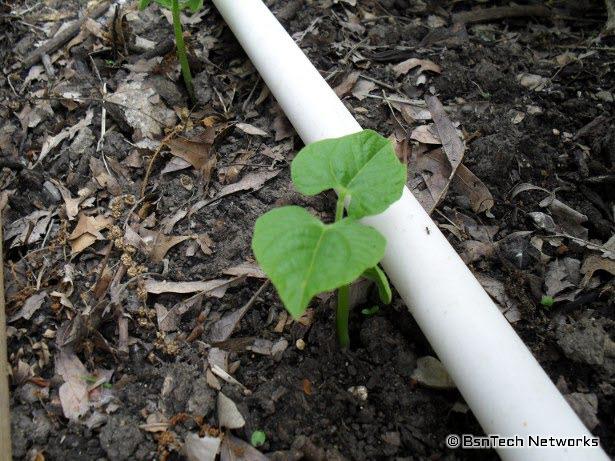 All the way in the back is the lettuce.  I made room to allow for 24 total lettuce plants at six inches apart.  Here is the Simpson Elite lettuce.  This is the only lettuce we planted last year and had a very good harvest from 12 plants.  Only two Simpson Elite lettuce plants are of a decent size right now – and the other four or so are still seedlings. 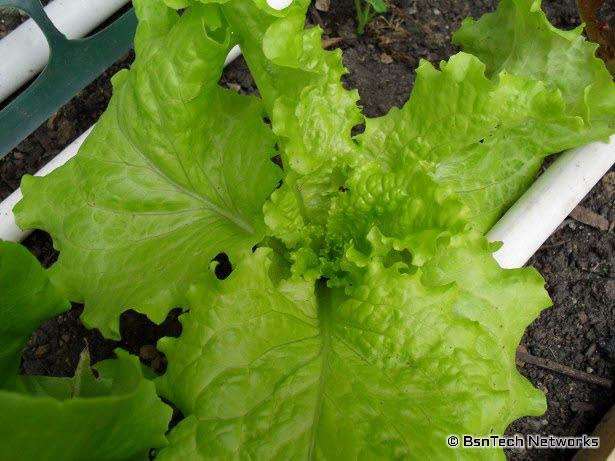 Next is the Buttercrunch – which is new this year.  Only one of these plants are of good size. 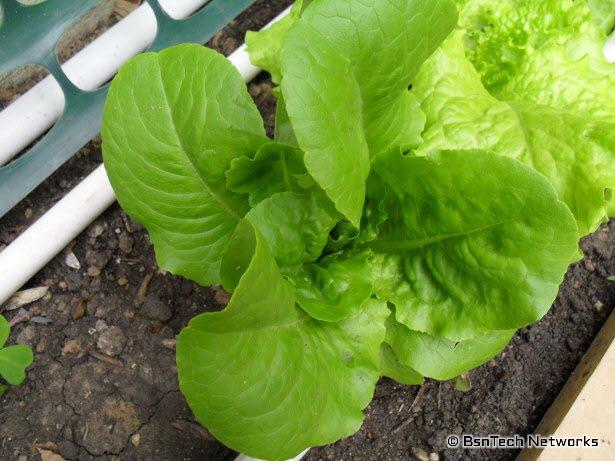 Last is the Red Salad Bowl plant – also new this year.  Only one of these plants is good as well. 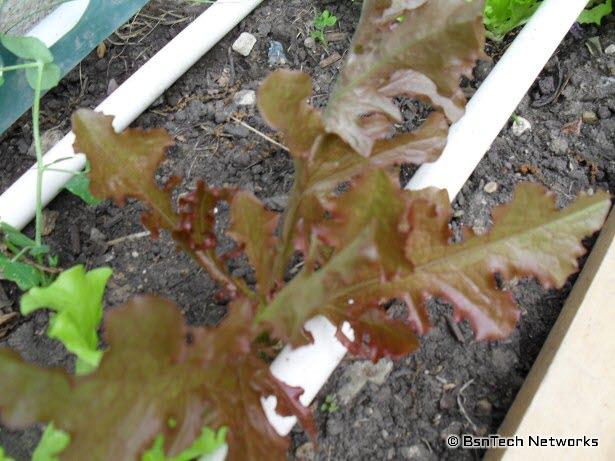 Moving onto the Kennebec potatoes.  Out of the ten potatoes planted in buckets, eight sprouted.  Later two didn't seem to be growing very well and flopped over and died.  So there are six potato plants left.  They are sitting behind the raised bed on the driveway which is fenced in with deer netting to keep the deer out. 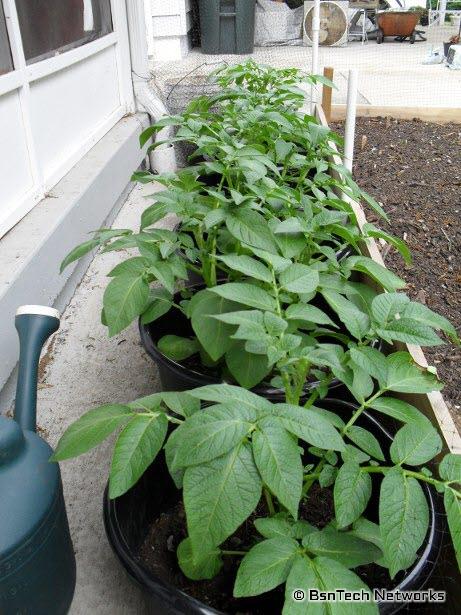 Next – carrots.  I planted Burpee A#1 and Sugarsnax carrots this year.  Overall, decent germination rate.  Unfortunately, something has happened to them over the past week.  I think some of it may be cut worms – but others I'm not sure about.  The stems are flopping over right at the surface of the soil – but they are still intact; they just look like they have been pinched.  Last year we had over 17 pounds of carrots; this year I think we may be lucky to get 12 pounds with all of the carrots that have succumed to whatever has happened to them. 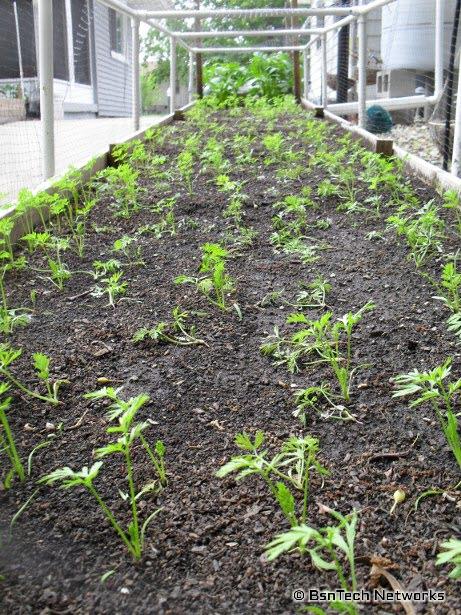 Next is the garden next to the house.  This garden has potatoes, Dwarf Gray Sugar peas, and the tomatoes growing.

As in the last post, I mentioned that each of the tomato plants already had blooms on them.  I had to pinch all of them off to promote growth.  Here is a picture of the Red Cherry tomato plant. 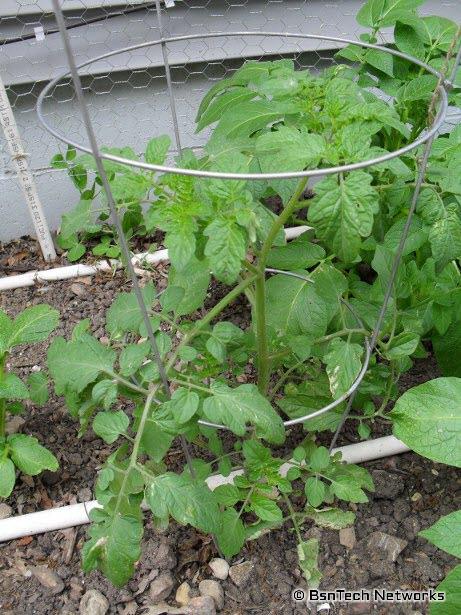 And the Roma tomato plant. 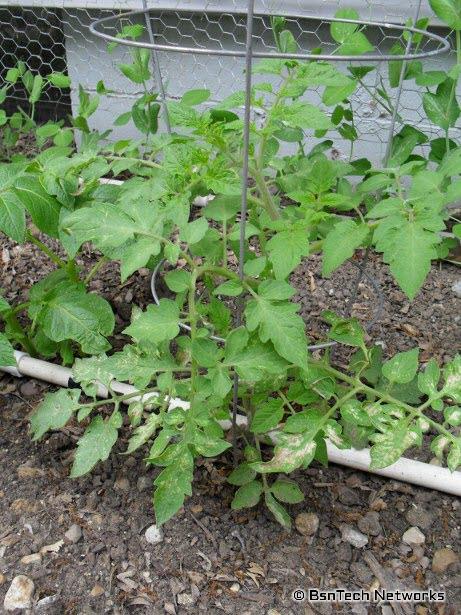 And the best looking of the five Best Boy tomato plants. 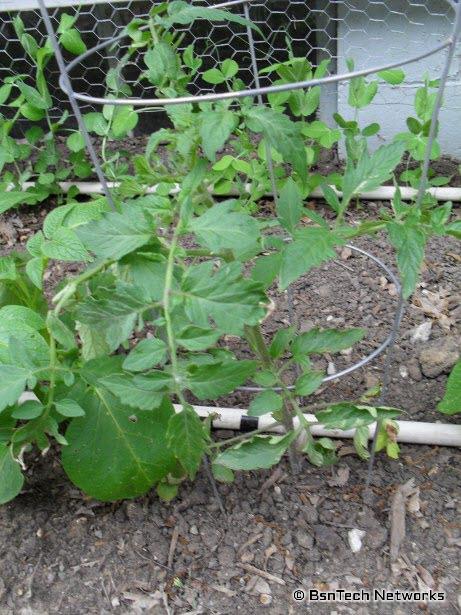 Lastly, the peas in the area. 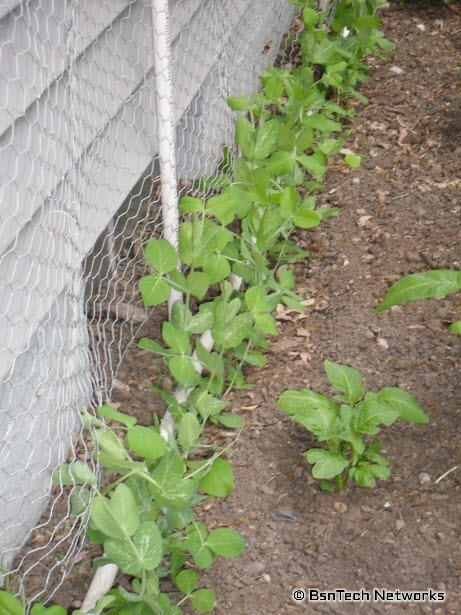 A while back I planted each of the peas in the standard black six-pack containers to germinate them before putting them in the garden.  The Dwarf Gray Sugar pea seeds were a year old – and the germination was very good.  However, the Super Sugar Snap pea seed was purchased this year – and only about nine of 99 germinated – very disappointing.  So I gave up and threw all of the soil into a bucket.  A week or more later, I started seeing sprouts.  Now, there are a few Super Sugar Snap peas that are growing in this bucket!  I couldn't just throw them out, so I left them in the bucket and set them up next to a fence.  Maybe I'll get a few more peas out of this. 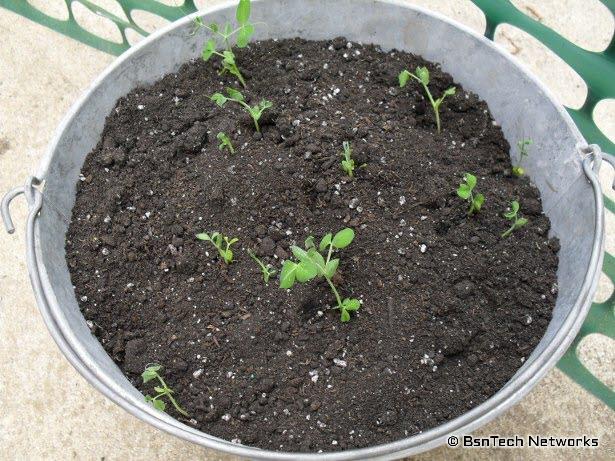 And for the last stop on the BsnTech Garden Tour – the front yard.  Below is the "front" part of the front yard garden – which is where most of the action is taking place.  I didn't take any individual pictures of the broccoli but it is seen below.  You'll also notice four black buckets – that is what the failed potatoes were grown in.  Instead of not using the buckets, I put a Sugar Dots corn plant in each.  42 of 43 Sugar Dots corn sprouted – and I only have room for 36 – so four went into buckets.  Now I need to find out what to do with the two other corn plants! 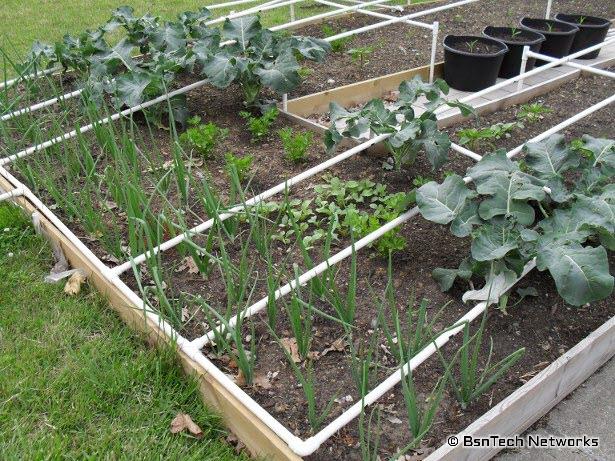 Closer look of the Copra Onion plants.  They are coming along very well.  They haven't begun to bulb out yet – but I'm sure it will begin in the next couple of months. 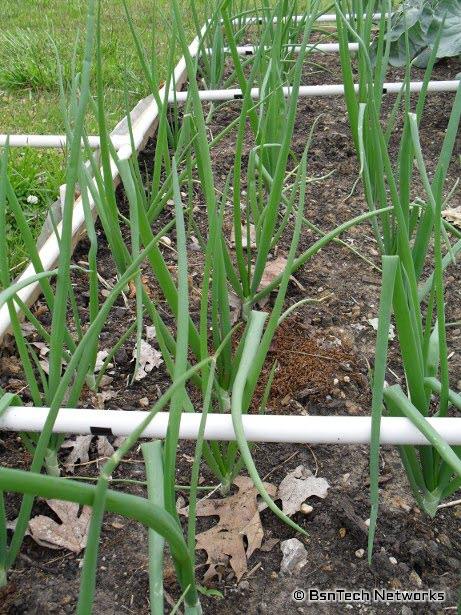 The Ventura celery is doing very well.  Unfortunately, one was lost as it was decapitated from the ground; maybe a cut worm got to it – I'm not really sure, but it was cut off at the ground level.  Another celery plant seems to have toppled over and is no longer standing up.  The leaves are all flat on the ground – so I think it is also a goner. 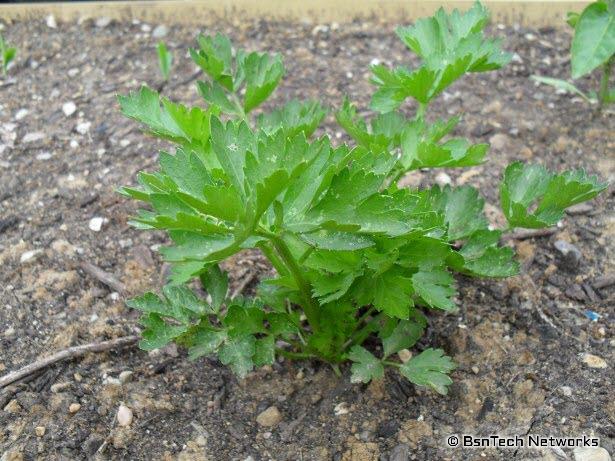 One of the California Wonder peppers.  I planted eight of these total.  I started out with 12 originally.  Two succumbed to something where the leaves turned brown and the whole plant went with it.  I gave two of the other surviving peppers to my neighbor.  The peppers are doing fine – although they are not growing much.  It has been cold lately so I'm not surprised by the slow growth. 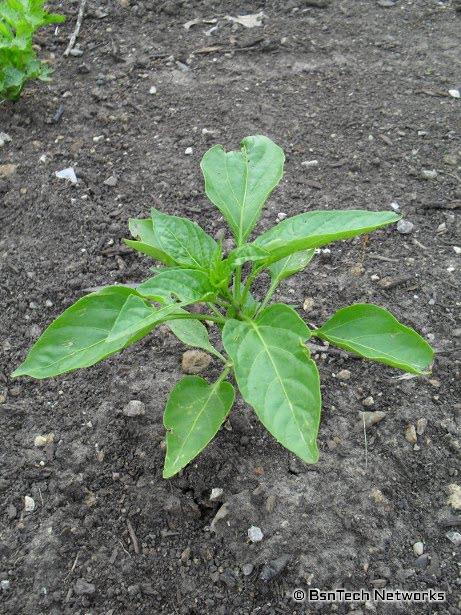 Now for some Crimson Giant radishes.  I planted another batch of 30 radishes a few days ago where the decapitated celery vacated it's spot.  The below radishes are about 2.5 weeks old now. 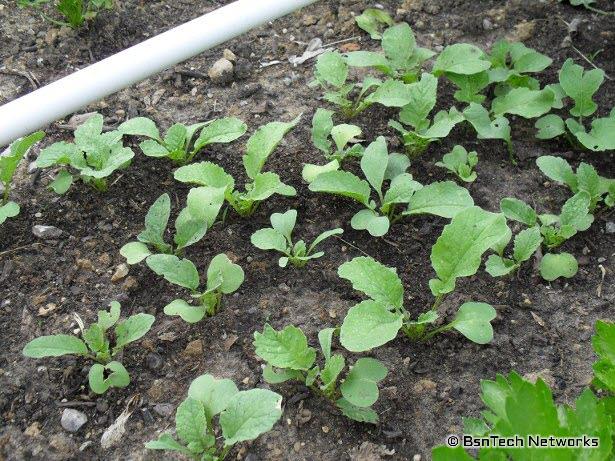 Now for a couple of pictures of the corn.  The corn is spaced one foot apart in the row – and about 16 inches between the rows.  The below picture is of the Sugar Dots corn since they have filled in nicely.  The other bed off to the left side in the picture is where the Silver Queen corn was planted. 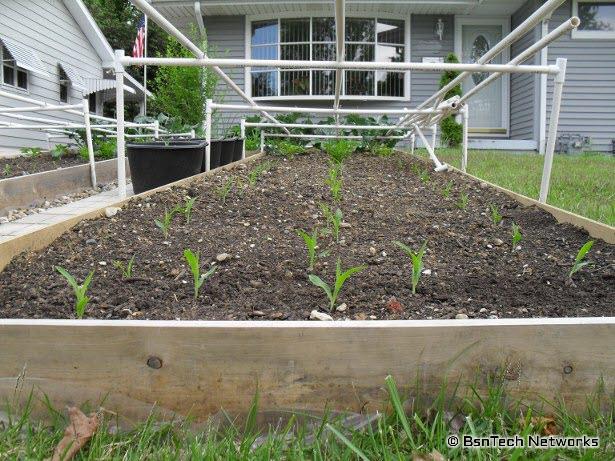 And a closer look of the corn plants. 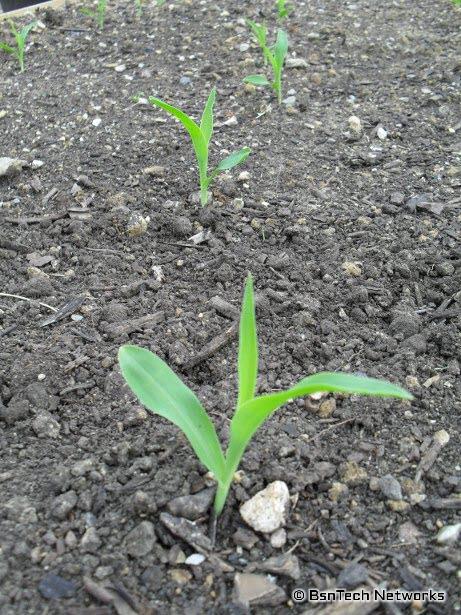 Todays task – mulching/covering the garden area.  Last fall I filled two large garbage containers with leaves that were mulched up in the blower/vacuum.  So today (after taking the pictures above), I mulched around the potatoes in the buckets to fully fill the buckets up with leaves.  I didn't take any pictures of that – oh well.  But, I'd rather have the area where the potatoes grow loose – and leaves will do the trick.  In addition, as I water the potatoes and the garden, the water will help to break down the leaves and provide a good fertilizer that will be worked into the soil from the top up – sort of like free time-release fertilizer.

The leaves will do a good job keeping the weeds at bay as well.  So, here is the picture of the front garden with all of the leaves covering around the plants. 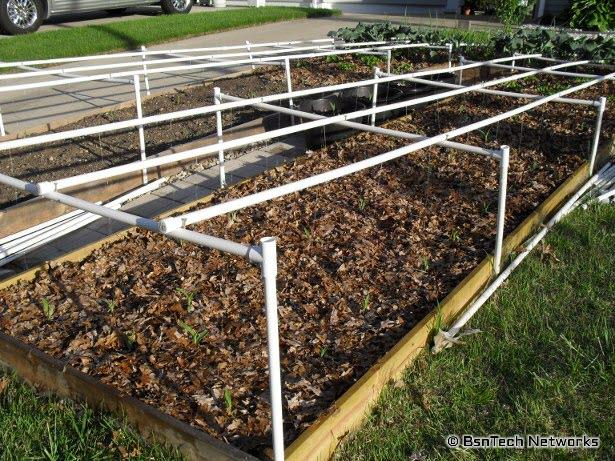 It sure caused some allergies when putting the leaves down with all of the dust!  My nose was running and I was sneezing up a storm while doing this.

I still have about one-half of a garbage container left of leaves – which will be used to mulch the other side of the front garden once all of the Silver Queen corn is filled in.

That takes care of the mid-month garden update with a lot of pictures!