The deer this year caused quite a defeat in the garden. Another bad year due to their feast.

The apple tree also took a hit. The deer had pulled the tree so hard that it somehow twisted a branch and it had to be cut off. We had maybe a dozen apples on the tree but they all are gone. I am also wondering if the tree itself caused the apples to drop early – since there were some very high up and out of reach of the deer.

Zero green beans this year. Green beans are planted down the four sides of the front garden and they were completely eaten up.

Tomatoes – sadly, maybe about six or seven collected. The deer stunted the tomatoes and prevented growth. While it was very hot this year during the summer, I am also thinking that fusarium wilt has set into the soil and caused some of the damage as well. Just a total waste with the tomatoes. Eight plants and almost nothing to show for it.

Peppers – at least somewhat of a bright spot. The deer mostly stayed away from the peppers to allow us to get several pounds of peppers. But once I took down the deer netting when cleaning out the garden, watch out! Within a matter of two days, the pepper plants were completely destroyed by the deer. Only the heavier stem sections were left. I always thought deer stayed away from peppers, but I know that is not the case.

Well, the front garden is all cleaned up. I am just not sure what to do next year or if it is even worth it. Sure, we got some peppers and some onions – but everything else was eaten. At that rate, I could probably return half of the front garden to a lawn. 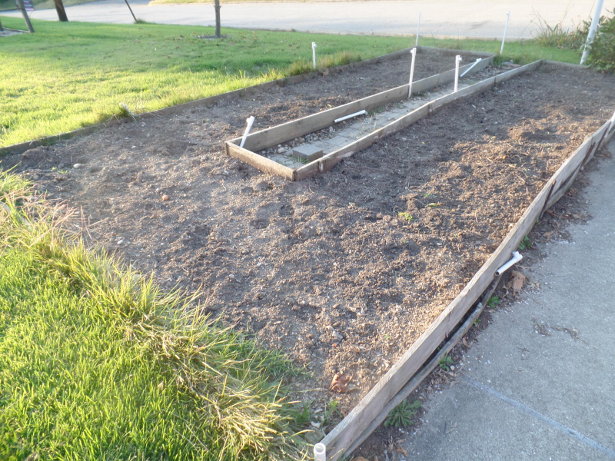 I am attempting to put out a fall crop of lettuce. I planted probably 30 seeds of four different varieties of lettuce. The only two that came up – the Simpson Elite lettuce. Wow, another round of bad success. But hey, two is better than none! They were seeded probably a month ago. And plenty of weeds coming up too that need pulled. 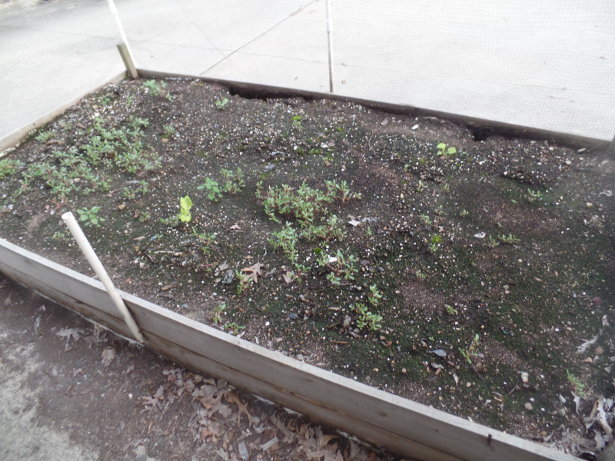 By the patio and driveway, there was a section of dirt. Long time ago, I planted watermelon on this area along with green beans and a few other things. But, it hasn’t been used for a few years now. So, a little bit of accomplishment here. Tired of picking weeds, it was time to put down some black plastic and fill in with river rock. 18 bags of river rock later, it is done. No more need to pick weeds! Nothing fancy – although I did think about putting in a couple of shrubs. Decided against it though. 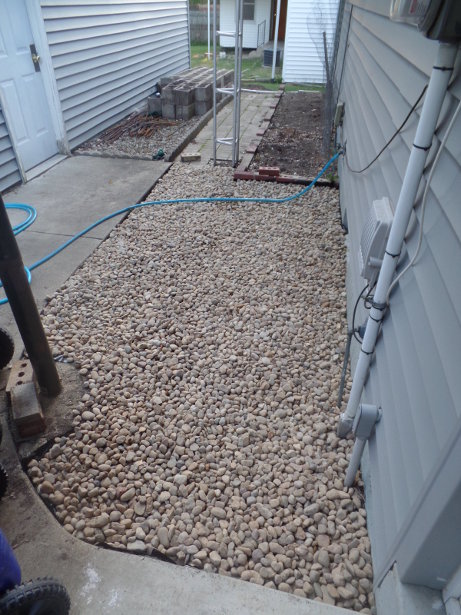 And the other accomplishment – which was a huge amount of work – returning the back garden to a grassy area. The back garden has certainly seen use over the years between peas, green beans, potatoes, onions, and tomatoes. But in the last few years, it has not been utilized nor has it grown very well. I’ve just let the weeds take over – and took over they did!

The cinder block retaining wall was all taken down a couple of weeks ago – leaving a lot of dirt to move. The area behind the garage sloped down towards the neighbors, but the cinder blocks kept it all level. So many years ago, a lot of dirt was used to fill and level out. 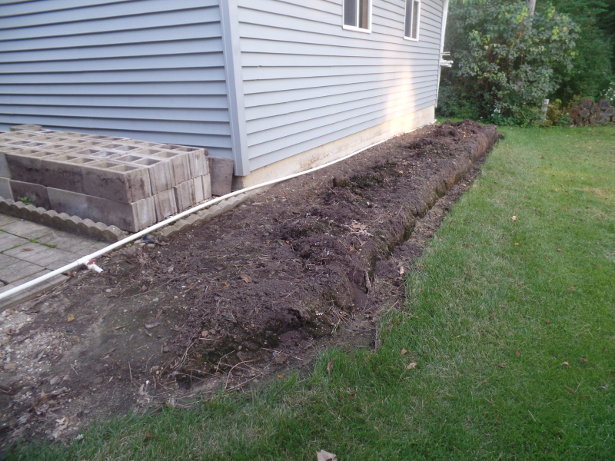 In the picture above, you can see the cinder blocks against the garage – now to find a new home for them! And there is also the drop-off of the dirt.

So this weekend, bright and early around 7:30, I got the tiller out and began to till the soil and haul away dirt. Luckily we have a small forest behind the house – so 20+ wheelbarrow loads later, everything was sloped well and grass seed was raked in. 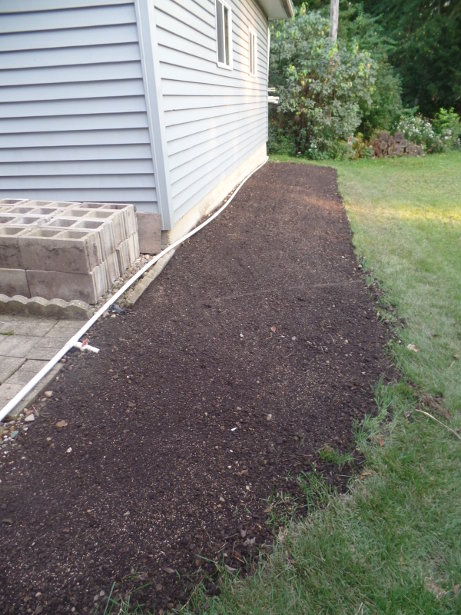 Looks quite a bit better. Now, I just hope that the grass will grow! I used a sun and shade mix that had fescue and Kentucky bluegrass varieties. It is mostly shaded since it is on the west side of the house – and with the forest to the south, it blocks the sun this time of year.

Well, we will see what next year brings. I’m still on the edge about what to do with the front garden. So much great space to grow veggies, but the deer and wildlife get to it before we can.