Over a month has passed since the last post – July 11th was the last one.  Between a family vacation and other things pulling me away, I haven’t done much gardening.

There hasn’t been a lot going on either.  In the last post, I detailed all of the potatoes being harvested.  Since then, the onions were all harvested and we’ve had a few rounds of some peppers.

I didn’t take pictures of the onions when they were picked, but they were picked and let to dry in the patio for three weeks or so.  This weekend, all of the onions were cut up.  It seems like there were at least 100 onions planted.  In the end, probably about 40 total onions made it through.  Many rotted out at the bottoms (which I’ve always had trouble with) and others died off or didn’t bulb.  One thing is for certain though – most of the onions were much smaller than usual.  I remember choosing the Copra onion variety specifically for the longevity of storage and the very large sizes that others had mentioned attaining.  There were a couple of years where I had good success with having larger bulbs, but this year wasn’t one of them.

Anyways, about a dozen onions were left whole so we can store and use them over the coming months.  We don’t use a lot of onions, but they are nice to put on salads. 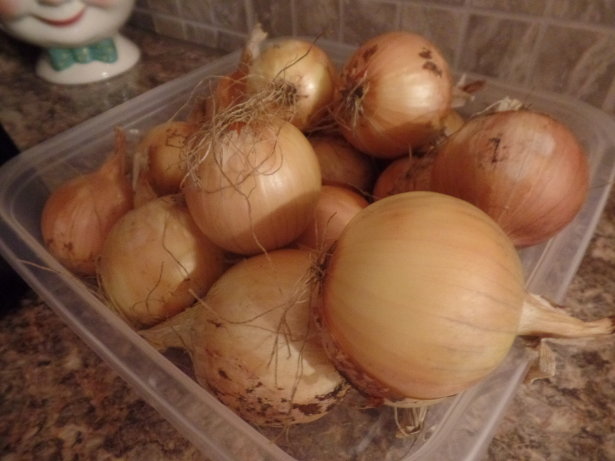 The picture makes them look big, but they aren’t.  And, the rest of all the onions were cut up and put in a gallon zip lock bag:

A couple of onions were also sliced to put in a crock pot chicken dinner coming up this week.

Next – peppers… lots of peppers.  The seed that I saved some peppers we bought at Aldi are fantastic.  They are juicy and sweet.  Plentiful supply of them too. Prior to going on vacation, I picked a large bowl of peppers.  My wife got them all cut up and put them in the freezer before we left as well.

Upon coming back, the plants were covered with them again!  Here is our variety; we have two California Wonder pepper plants (the bell pepper type) and the smaller peppers are those that came from seed saved from the Aldi peppers. 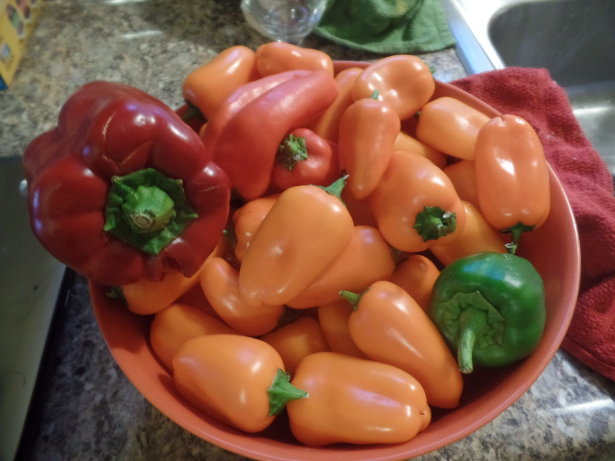 Well, that takes care of the produce.  We have picked a few minor tomatoes from the garden as well, but those have also been quite disappointing.  The tomato plants have been browning at the bottom so I expect they have a disease.  The goal is to rotate tomatoes between three different places – that way you don’t plant in the same spot for three years.  This helps to prevent disease build-up in the soil like fusarium wilt.  Here is the row of tomato plants: 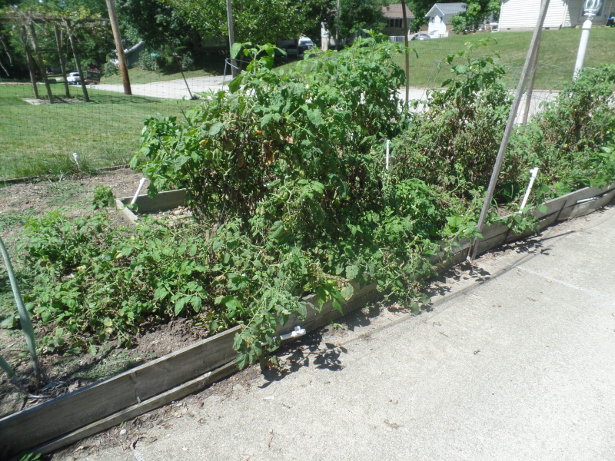 And the row of peppers: 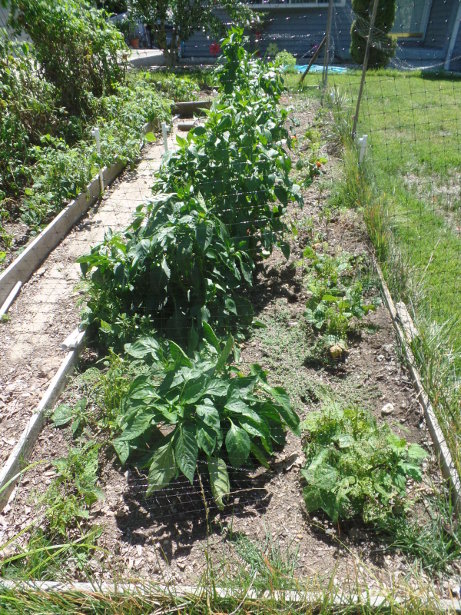 It has been a tough few years.  Tomatoes were very poor last year and are poor again this year.  Last year, the deer caused destructive damage.  This year, the same.  They also leveled all of the green beans (although some do remain but no beans).  Onions haven’t been great for a couple of years.  Peas were poor.  It is enough to make someone that has been gardening for years scale back – which is exactly what is happening.  Just yesterday, it was a great day to get outside and do something.  So, I decided it was time to dismantle the back garden. 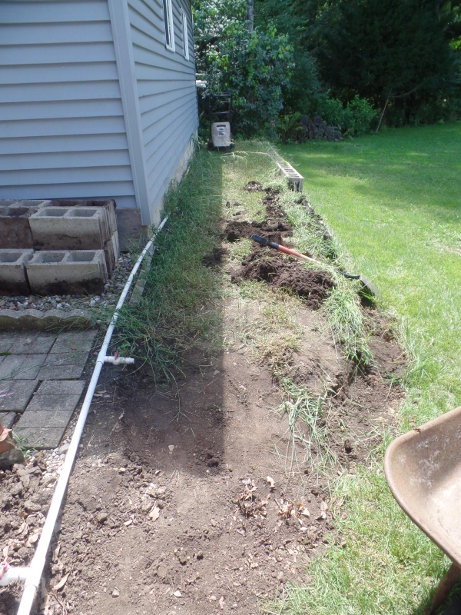 Boy did I have my work cut out!  When I initially put this garden in, I made a trench to try and level out the first row of cinder blocks.  Then there was one more layer of cinder blocks on top.  Between the ‘holes’ in the cinder blocks, I drove rebar down a good 18 inches or more to keep the cinder blocks from moving.  I also had the fence posts made of rebar that were drove down far.

The hardest part of the situation – getting the rebar out!  Getting rebar out of the ground was not a fun task.  In the end, I was successful with finding a strategy for doing so.

After I removed the two layers of cinder blocks, that exposed the rebar for a good 14 to 18 inches.  I pulled the rebar towards me until the rebar bent.  Then, I took the rebar and started to rotate it in a circle.  By doing so, that caused the piece of rebar to loosen up and expanded the hole it was in.  With a little bit of might, I was then able to pull the rebar out of the ground.

I worked for 3-4 hours on Sunday and got about half of the wall removed.  I’m out of shape since I haven’t done strenuous work in a long time, so I decided that doing half today was good enough for now. 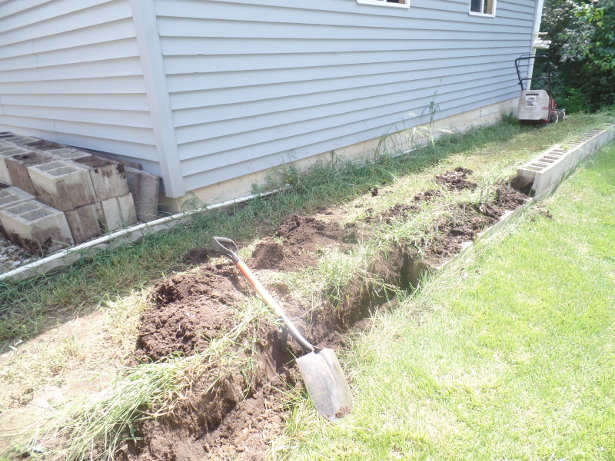 Why remove the back garden?  Well, I’ve not had too much success with growing anything back here.  It is on the west side of the house and the area only got five hours of sun or so each day.  This isn’t enough to grow much of anything.  But, over the years, I have grown peas, cucumbers, potatoes, and tomatoes in this area – and even put onions in the ‘holes’ of the cinder blocks.  But the past couple of years haven’t turned out well for the back garden – and then I just let it get overgrown with weeds.  So it is time to turn it back into a grassy lawn.

Finally, a couple more pictures.  The grape vines are starting to die back.  The birds have had their fill of the grapes so at least the wildlife are getting use out of them. 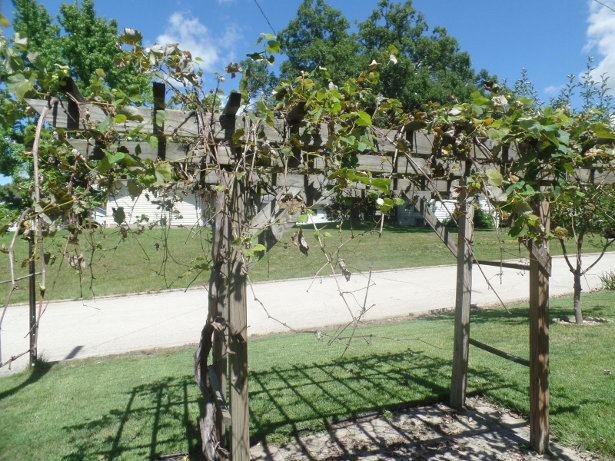 And – at the beginning of the year, my wife and our daughter planted a few things in one of the garden beds on the driveway.  Well, the carrots are still growing and look good!  So I figured I would take a picture of the few carrots that were planted and a picture of our daughter smiling for the blog. 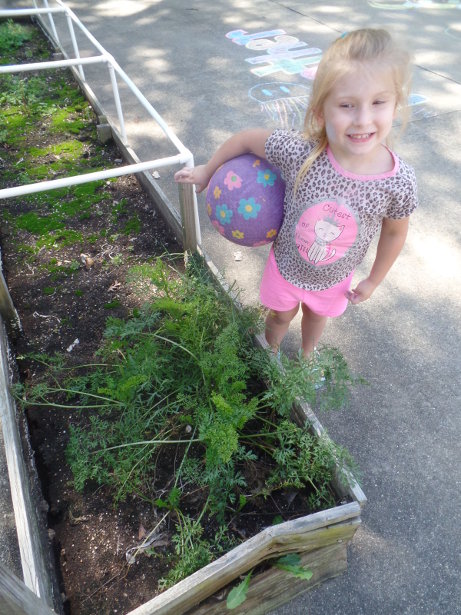