Wow, that almost reads like a headline in a newspaper – "Early Heatwave Allows Garden Preparation".

Anyways, that is definitely the case!  This week has been exceptionally warm.  Yesterday it was almost 80 degrees.  Today was about 82  degrees and tomorrow is supposed to be very warm as well!

We had some rain on Sunday but the rest of this week has been bone dry.  It will rain again tomorrow evening from what the weather people say.

We did have a frost Monday night – but since then it has been very warm.  I sure hope that doesn't mean we are in for another year like last – where it was over 90 degrees in June!

Last Sunday I wrote about the rain barrel and PVC irrigation integration.  Here are a few pictures from that day.

We'll start off with a picture of the grape arbor and strawberry pyramids.  The wife cleared out all of the dead leaves from the strawberries a a few days before.  It looks like there were about four or five strawberries that didn't survive the winter out of almost 50 plants – so not bad.  The grapes have been pruned and the buds are really beginning to push out on them! 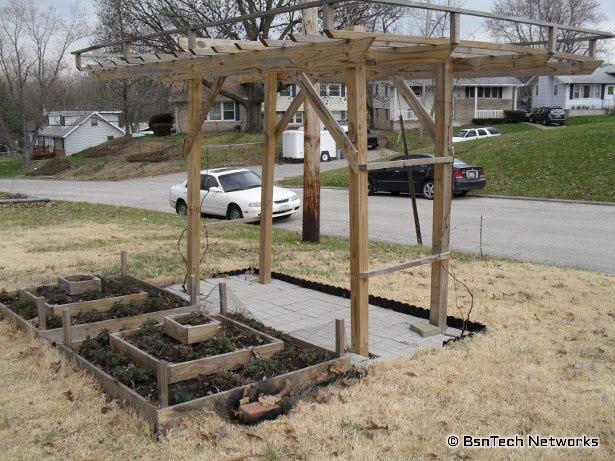 Here is a picture of the front garden.  Here you can see most of the PVC up.  The horizontal PVC going across the garden area are the supports that hold the six 20-foot irrigation lines.  This leveled the lines out so they are flat – since the front yard slopes.  This was needed so that when the water starts flowing, it flows evenly amongst all holes in the line. 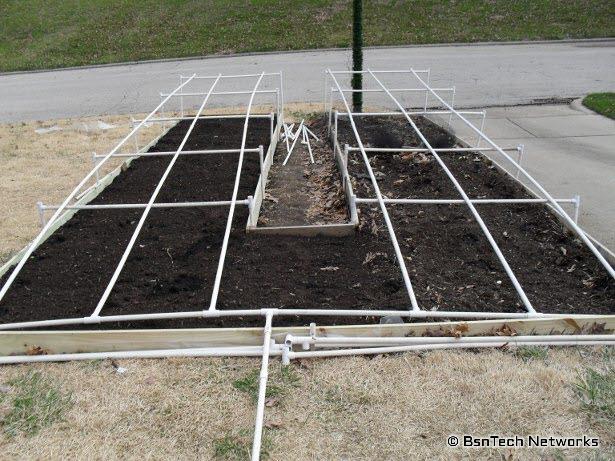 Here is a side view where you can see the level of the ground.  It really seems like the pipes are going uphill, but they are really flat! 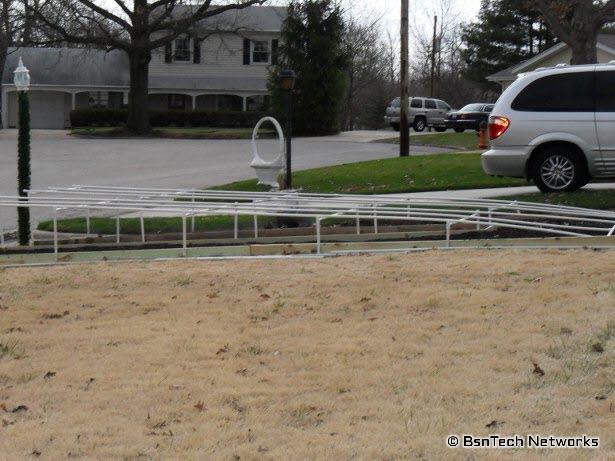 Today (Thursday), I have mostly finished up all of the garden prep.  I've tilled the area beside the house, behind the garage, the potato area, and the newest 4 x 20 garden area up front.  I used a claw-like tool for the carrot bed and the bed by the patio – where the herbs and green beans will be this year.

I worked from the moment I got home from work until sun-down the past four days getting everything done.  The fencing for the peas has been erected and the new fencing around the retaining wall.  The mesh for the fencing that goes around the  retaining wall allows more sunlight through.  Last year I used the green snow fencing – but that wouldn't allow much light through.  So the green fencing is now used for the peas. 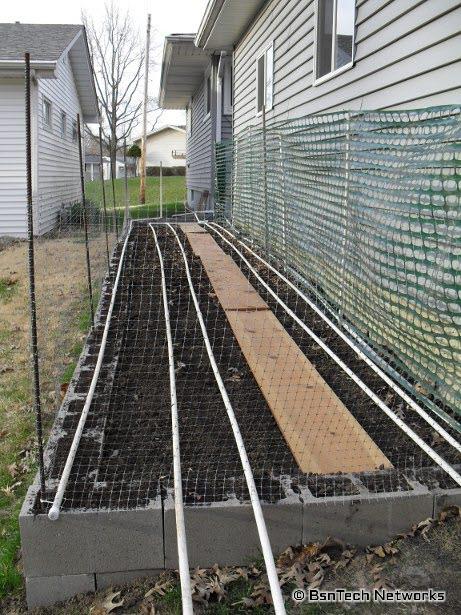 You can also see the wood that I put down in the area.  This will be the walkway for us to pick the peas, cucumbers, and green beans. 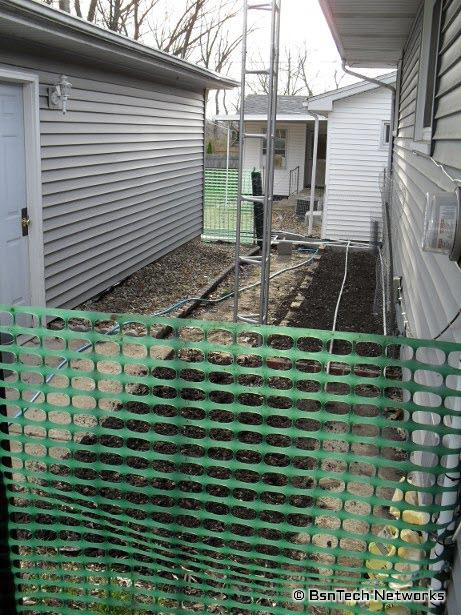 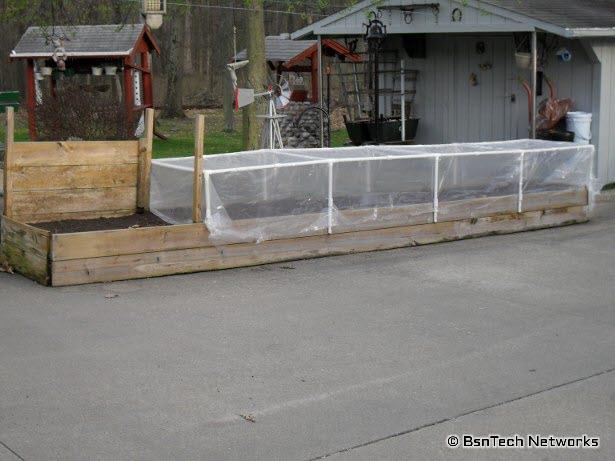 Above is the carrot area.  It was clawed up and covered with plastic to keep some of the moisture in.  I'll be planting carrots around the 15th of April.  The area to the left was the old potato bin – that turned out to be a failure last year.  So I'll plant potatoes here again, but will not make a bin out of it. 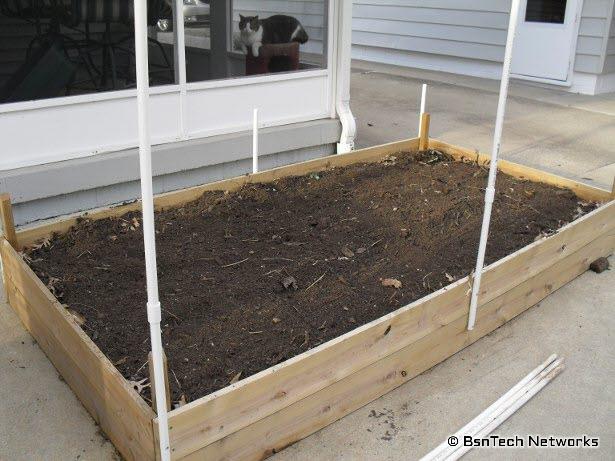 Above is where the herbs and some green beans will be.  One of our cats, Tom, is on his perch in the background enjoying the warm weather.  The PVC pipe in the front is long because I'll have to put deer netting around the bed to keep them out.  This area was also all clawed up and loosened yesterday. 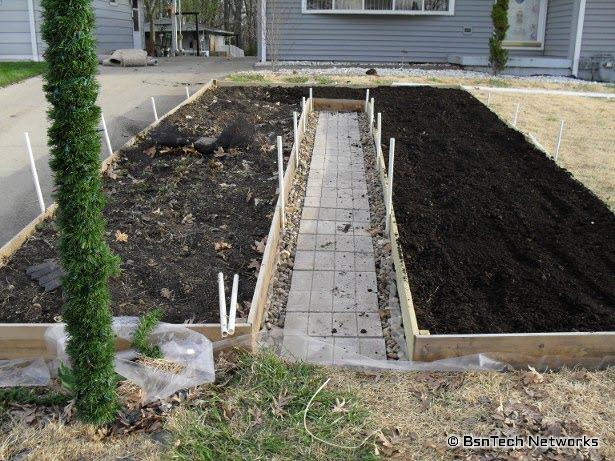 On Monday and Tuesday, I put in the patio blocks and some rock.  The path is two feet wide in most areas, but other areas it was an inch short.  The plan was to put blocks like I did above, and then lay another block vertical to them on the left.  Since the area wasn't the same throughout, I just put down the patio blocks down the middle and rock on both sides.  It took quite a while to smoothen the area out with some sand and then plastic was put over the top of the sand to keep out the weeds.  The patio blocks and rock were then put on top.

I got a great deal on the patio blocks – which is why I chose to use them.  Originally Menards sells the 8 x 16 patio blocks for 99 cents each, but this week they are 50% off and are only 50 cents each.  I bought 36 of them thinking I would use all of them here, but since I only used 24, I have 12 left.  I intend to go back to purchase more and use these same blocks in the walkway between the house and garage where it gets very muddy after it rains (you can see that four pictures above).

Lastly, in the picture above and below, you can see the nice black soil.  This is the new part of the bed that was all tilled up today.  The other side was made last year and I just plan to go over it with a rake.  Since worms and other good stuff is growing in there, I don't want to interrupt their habitat. 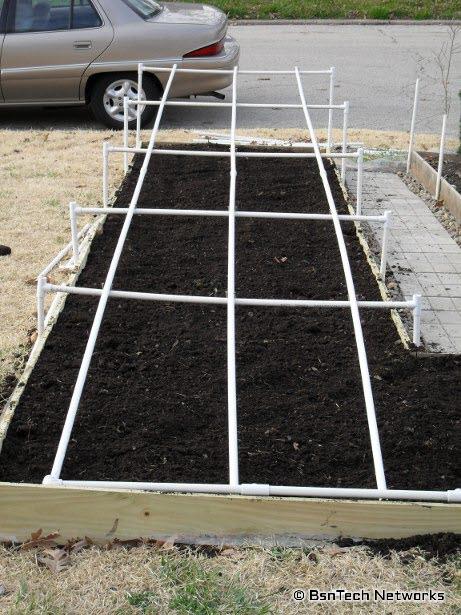 Also above you see three pieces of irrigation pipe.  I had a problem with them wanting to be pushed around by the wind, so I used a drill to make a hole on either side of the pipe that the irrigation lines are running on top of.  I then put a screw in each of these so they are spaced evenly apart.  You can almost see some of the screws in the picture above, although they are hard to see.  This will keep the pipe in place and the wind won't be able to blow it around.

That is all for this week so far.  The seedlings are doing well and I planted another three seeds of Simpson Elite, Buttercrunch, and Red Salad Bowl Lettuce yesterday.  I had one seed of each sprout a few days ago for those that I planted last Wednesday.  I'm only planting three of each every week (and will thin to only one each if more than one grow) so we'll have a rolling supply of lettuce all year.