Today, April 22, is Earth Day 2010.  This leads to the question – what have you done this year to make a little part of helping our environment?

As many other followers have seen, I have done a part for our household by saving rain water with the large rain water collection system.  How has this helped the environment?

And lastly, it has helped the environment because I have posted how-to videos and my blog entries on how to create this sytem.  I have discovered that I have links to my site just for the rain barrel system I have created – and others are contemplating on making this system themselves.  The more people that create the system based upon my idea, the more the environment benefits from all of the points above.

After I saw some sites linking back to my system and folks saying that they are contemplating on building the system, this filled me with joy and made me a little proud – that I can help out others with collecting free rain water and that I can make a difference towards the environment.  My neighbor is also very impressed with the system as well and is trying to get one of the master gardener’s to come out and take a look as well.  From there it could potentially catch on since it has the University of Illinois behind it.

We managed to finally get some much-needed rain last night!  It was reported that we had approximately 0.17 inches of rain in town.

For the first update – I have added a new method of getting rain water into the barrels.  Because the house and garage are about five feet apart – and because the garage roof is about a foot lower than the house roof, this makes it perfect to divert water from the house to the garage gutters. 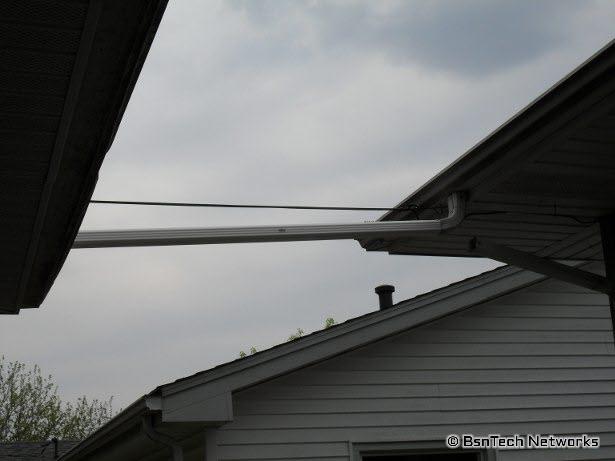 There is only one downspout I could do this with.  The house has four downspouts – two are in the front yard, one is by the patio, and the other one is outside a bedroom window – that worked perfectly for diverting.  I got a 10-foot piece of plastic downspout pipe and connected it to the existing 90-degree elbow on the downspout from the house.  The plastic downspout pipe was cut to a length to just allow the pipe to make it over to the garage – where the water pours into the garage gutter.  This allows more water to be collected.

How much water?  Well, here is the information and figures.  It took just about one inch of rain from a 24 x 24 foot garage to fill six 55-gallon drums – 330 gallons of storage capacity.  I have since added on three more 55-gallon drums – making the capacity 495 gallons of water.  This represents a 50% increase in storage capacity.  Therefore, by using just the rain water collected from the garage roof, this would now require 1.5 inches of rain to fill the barrels.

Amazing – so with one downspout from the house collecting only 25% of the water from the garage, it supplies 33% of the total water for the barrels.  I would say that is a good payoff for just bying an $8 piece of plastic downspout pipe.

On another note – I am now having difficulty with something I knew would happen – algae build-up.  Over the weekend when I drained the barrels so I could add the three additional barrels to the system, I noticed that the bottom of the white barrel was dark – and I couldn’t see through it.  Well when I pumped the water back in once everything was hooked back up, it started moving a swaying – hair algae!  Well, needless to say, the algae became loose and got down into the 2″ PVC pipe that connects all the barrels – and the pipe also feeds it to the irrigation system.  When I turned the irrigation system on shortly after, the algae clumps got in and clogged some of those 1/16-inch holes in the PVC irrigation pipe.

I had to take all of the pipe apart and connect the hose from the house spigot and clean the pipes.  I then placed the cap back on the end of each of the PVC pipes and it then forced – with great pressure – all of the algae out of the 1/16-inch holes that were clogged.  All of this took about an hour to do.

Now I need to come up with a way to fully stop algae from growing – or at least clumping together like this.  Originally I got a large piece of black plastic and I was going to cover all of the barrels.  But, I found out that I also have to do something with the blue barrels because light also penetrates through them – along with the 2-inch PVC pipe that connects all of the barrels together.  The only reason I have the one white barrel is so I can see the level of water that I have left.  So as a temporary solution, I will cover this white barrel with the black plastic and see what results.  Eventually I will most likely paint this barrel – but leave a one-inch wide vertical line that is not painted to allow me to see the water level – then I can just cover up that little area with something – and uncover it when I want to see the water level. 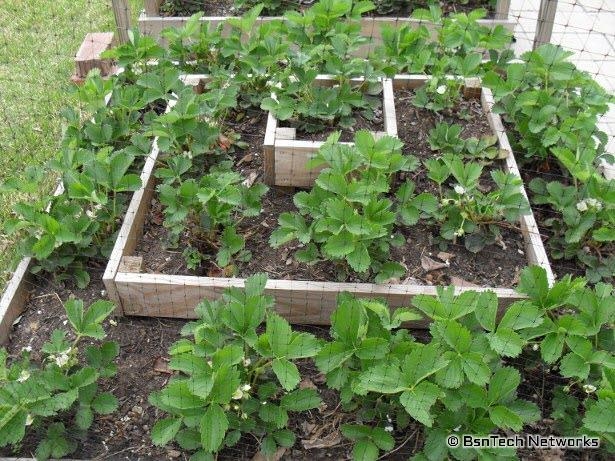 As I mentioned in a previous post, the deer got to the grape vines before I could cover them with netting.  Here is a photo showing the total damage the deer did to the vines. 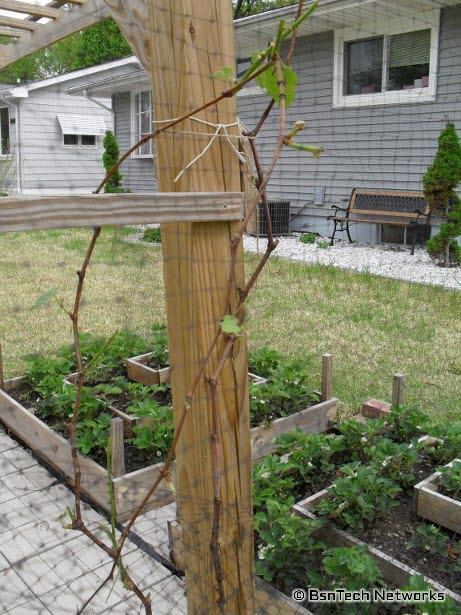 The broccoli is doing very well.  One of the eight has some kind of growth problem and unfortunately – it doesn’t look like it will produce anything.  This one will be pulled out of the garden soon – and then I can use this space to possibly grow some radishes! 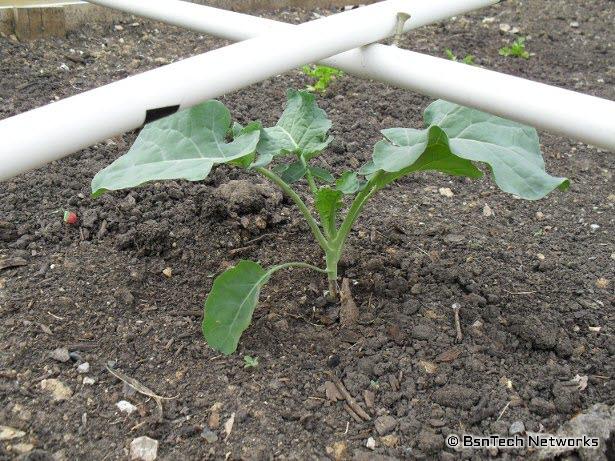 And for the runt: 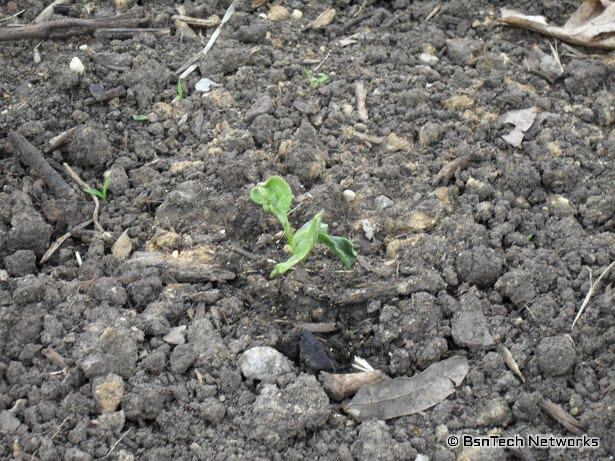 It is too early to plant tomatoes in a typical year – but I already planted ours two days ago.  I didn’t want to, but I was sort of forced to do so.  The tomatoes have been growing much better as seedlings than they did last year – and I think this is becuase I was using rain water to hydrate them – instead of tap water.  The tomatoes were very root-bound and some of the roots made their way through the holes I drilled in the bottom of the cups.  It was definitely time to plant them out.  So, I planted out five Best Boy tomatoes, one Roma tomato, and one Red Cherry tomato.  I still have about 12 tomato plants left in the 16-ounce cups that I will be giving to family and to the neighbor. 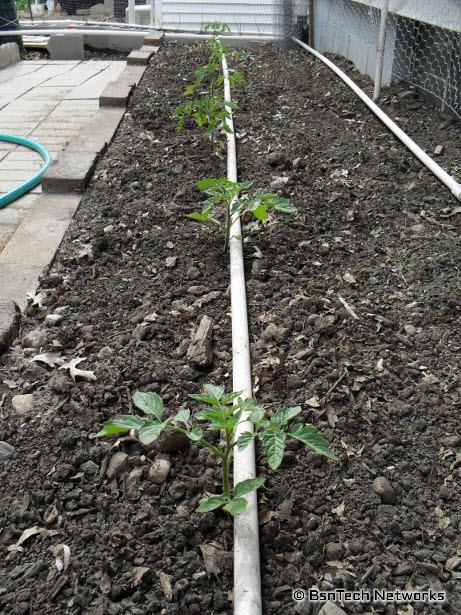 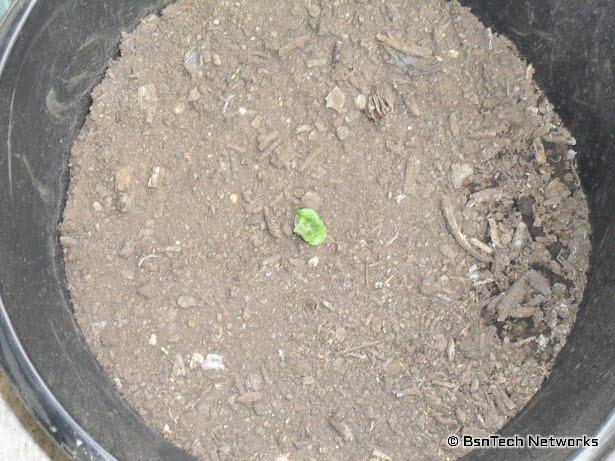 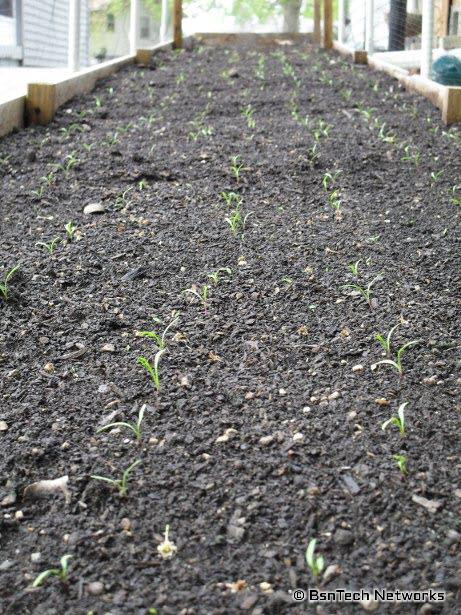 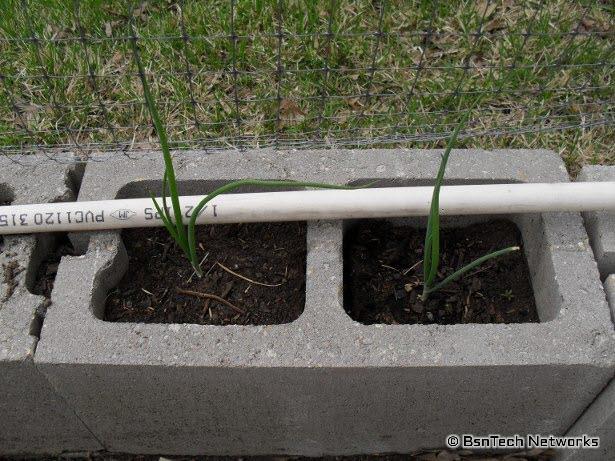 And lastly – the celery.  Luckily it seems every last one of the 16 Ventura celery plants that survived made it to the garden.  All of them appear to be growing well – although some don’t seem like they’ve grown very much since being transplanted into the garden. 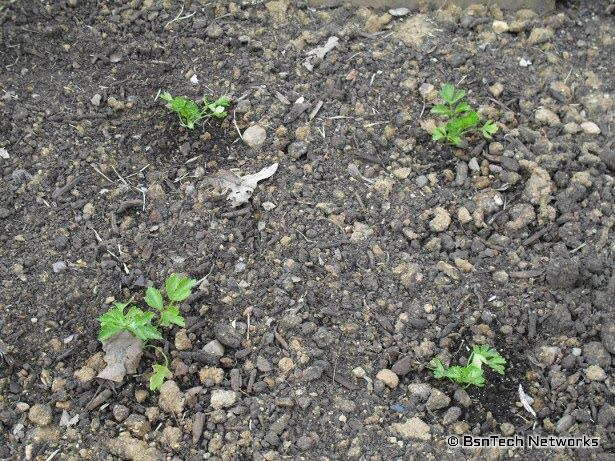 The average last frost date is coming up soon!  The average last frost date for Decatur IL is approximately April 27th.  This still means – on an average basis – that there is a 50% chance of frost after this date.  However, due to the warming that has been occurring, I bet April 27th is more of a day where there is only a 25% chance of frost after this date.  I looked at the seasonal averages and the record highs/lows on the Wunderground page and it shows that the seasonal averages are now above frosting temperatures.