It is now almost the end of May!  Therefore, it is time for another garden update with a lot of pictures.

Today we had some brief heavy showers.  I'm not sure what the water level was on the rain barrel system after I watered the garden last night, but the barrels are 2/3 full currently.  We haven't had any rain for over a week now – until today when it downpoured just for a few minutes and let up.  That was good enough to give the garden a bit of a drink. 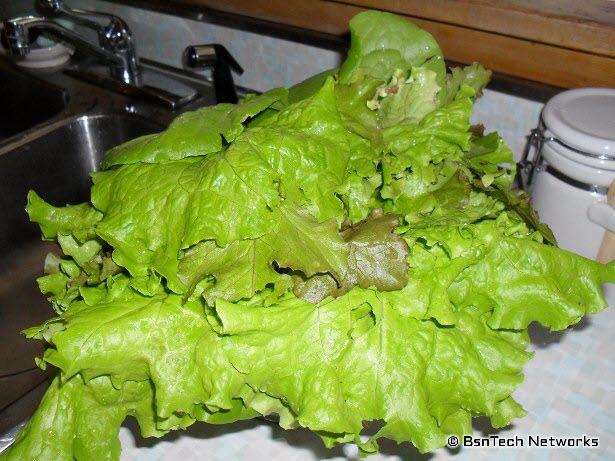 The herbs are coming up well.  Most of all the seeds came up – except oregano.  In a previous post I mentioned that the oregano seed seemed to be about the size of a grain of sand.  Well, it isn't that small but it is very small!  Needless to say, I don't believe any of the oregano seed has sprouted yet.

Here is a few parsley plants: 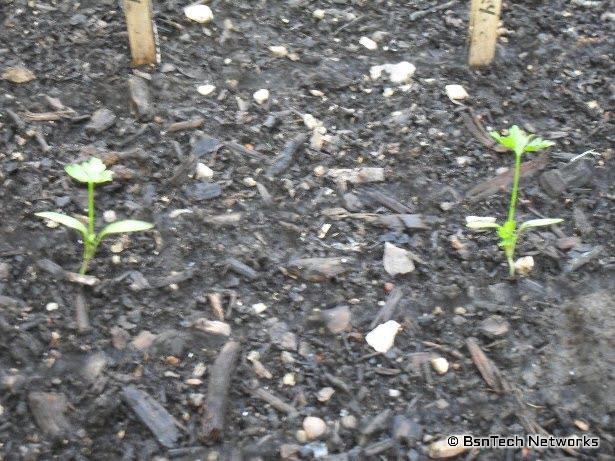 And a few cilantro seedlings: 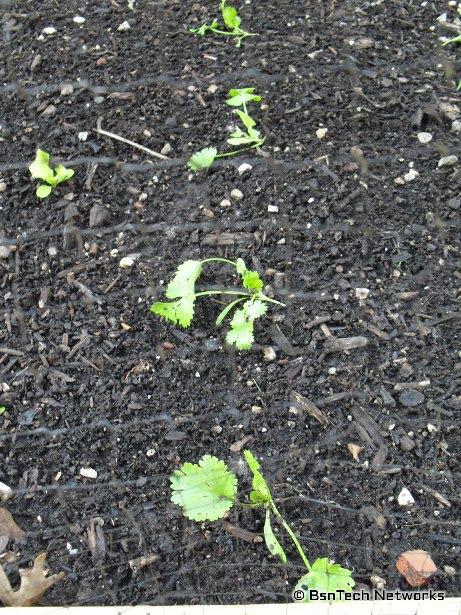 And lastly, the basil seedlings: 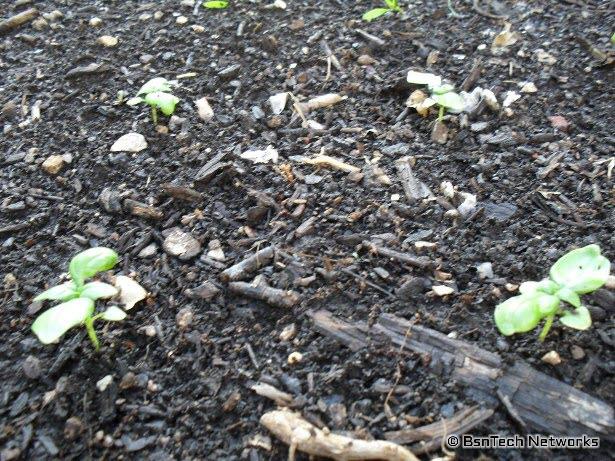 Along with my other post, I mentioned that something killed a lot of carrots off.  I had to go through and re-seed the carrots in the bare spots.  It has been eight days and there are dozens of new carrots that have come up thus far.  They are still small and can't be seen below, but you can see where all of the bare areas are at and how the original carrots are coming along: 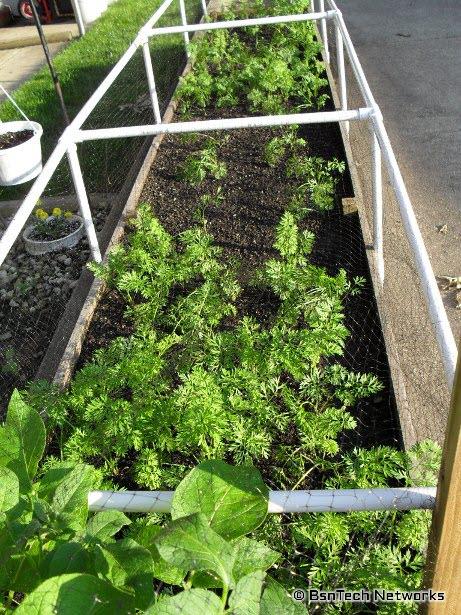 Moving to the side garden.  The potatoes are doing very well (although they have tipped over a bit along with all the other potatoes because of the storm today).  The peas are also happily climbing the chicken wire. 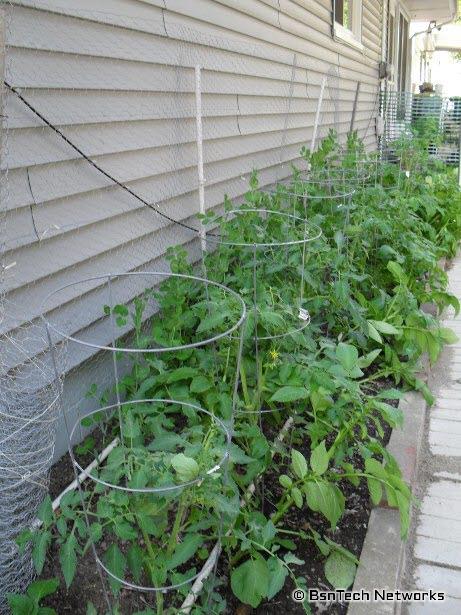 The Red Cherry tomato plant is doing the best out of the three varieties thus far.  It is growing very quick! 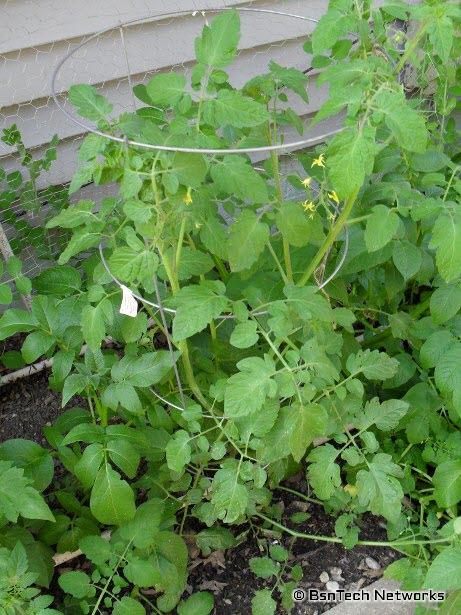 Next in line is the Roma tomato plant.  Notice how these have blooms on them already (they did previously but I pinched them off – but I'll let these stay). 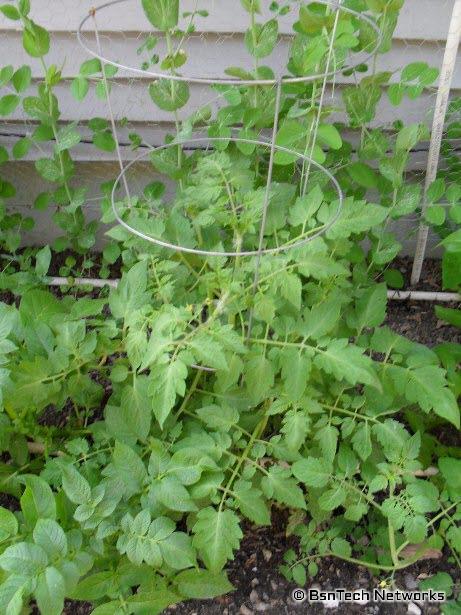 And lastly, the Best Boy tomatoes are coming along nicely as well. 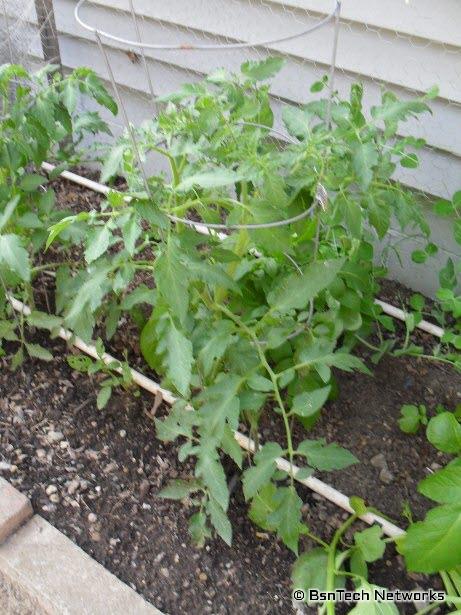 How are the potatoes in the buckets doing?  Very well.  They have been "hilled up" with mulched leaves.  I need to really think about hilling up all of the other potatoes because they are getting stalky and are falling over.  Before long they will start producing potatoes. 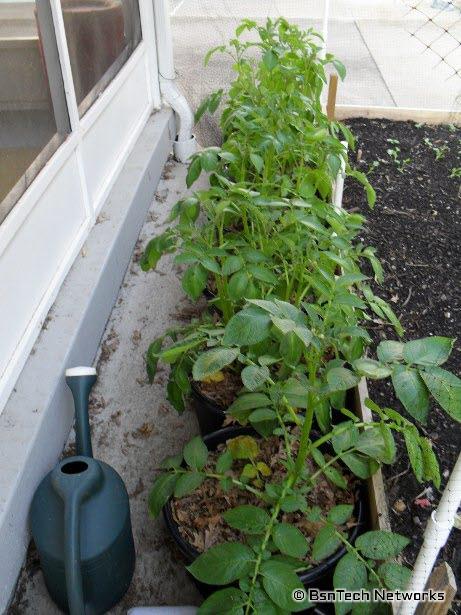 And for the back garden.  You can see the potatoes here leaning due to the storms.  It is hard to see below, but they are on the right-side of the boards that make up the path.  The little fellas are the Greencrop green beans.  I had to plant another 16 of them in places where they didn't come up – and it has been about 10 days since planting them thus far. 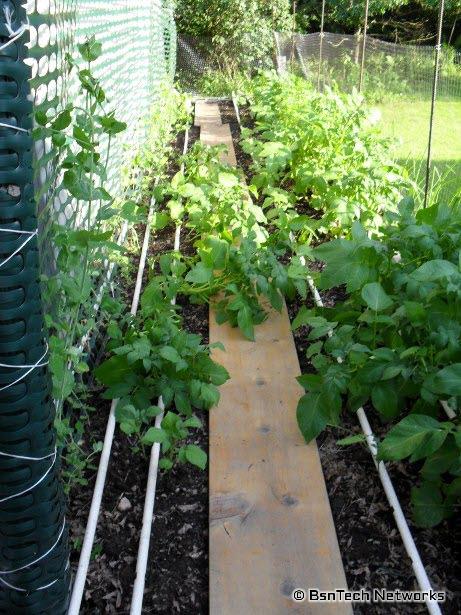 The grapes are coming along well.  The Concord Seedless must have been a slow bloomer because it just isn't growing near as fast as the Flame Bunch grape vine. 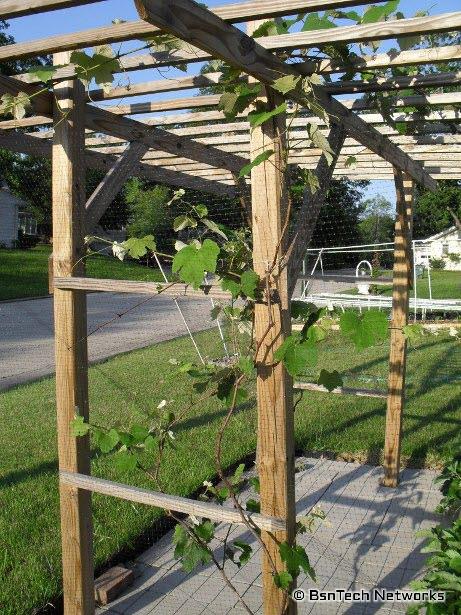 And now for our last stop on the garden update tour – the front garden. 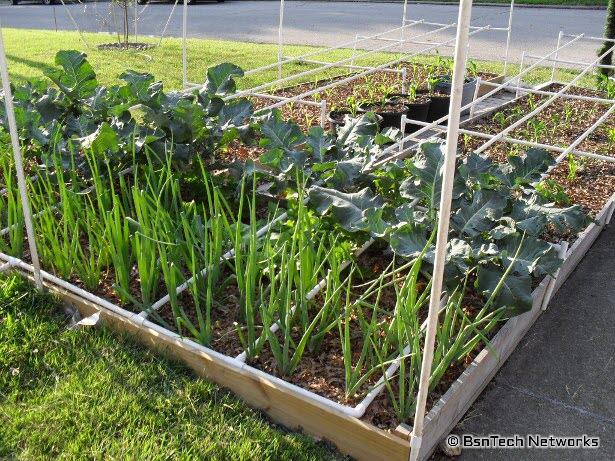 Everything is growing very well in the front garden.  The Copra onions really are looking fantastic. 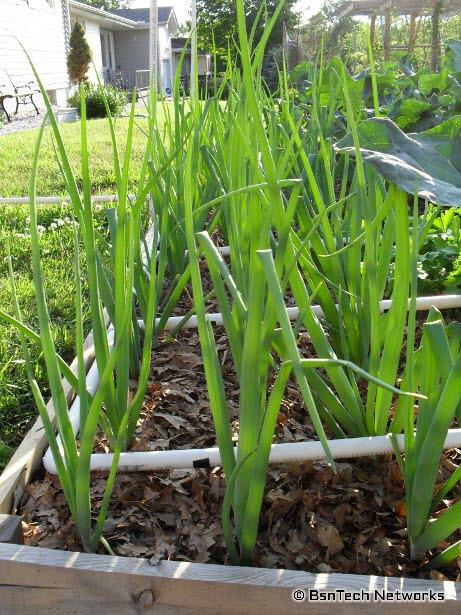 Each of the seven Green Goliath broccoli are also putting on the head of broccoli as well.  This year I think I will keep the plants in after cutting out the main head to allow the side shoots to develop.  Last year I chopped them down right after the shoots developed to put some green beans in. 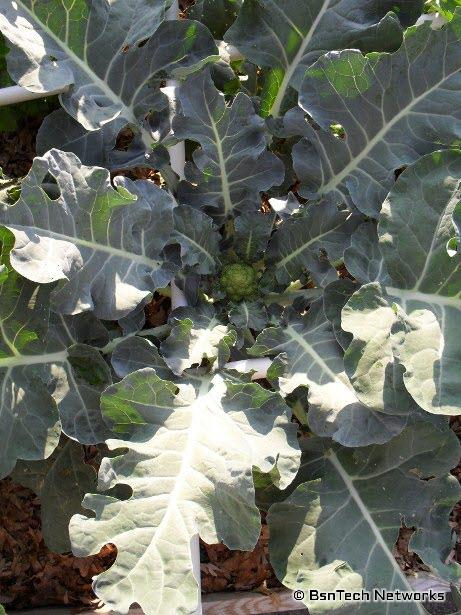 The pepper plants still seem a bit stagnant – but at least they are growing a bit.  The weather during the past week has been in the mid-to-high 80's which is perfect weather for them. 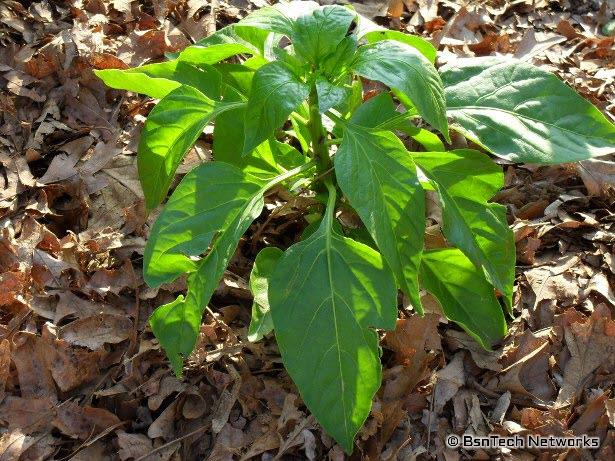 The Ventura celery is doing very well.  I still remember when they were so small I was afraid they would be smashed.  But they have done very well!  I think I'll give celery another go next year as well. 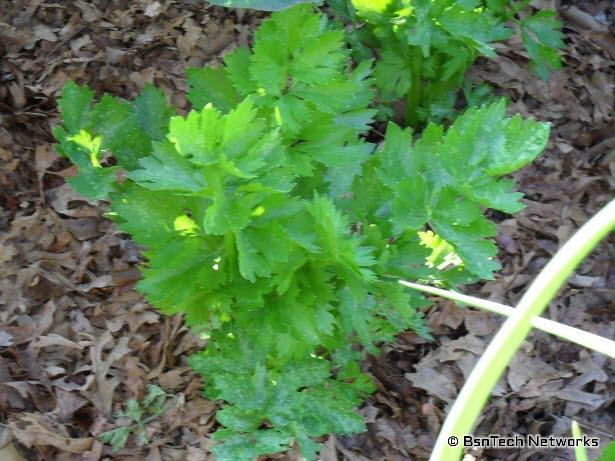 And lastly for the front garden – the corn.  The corn is doing very good as well and have perked up with these warmer temperatures. 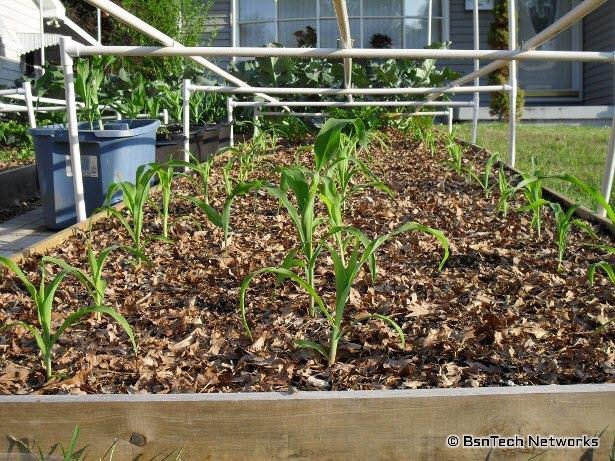 Next – the cucumbers.  At the recommendation of some folks on GardenWeb, I planted some Straight Eight cucumbers along with some Burpee Pickler cucumbers.

They were planted eight days ago and within six-seven days, most of them have come up.  I planted twice as many as I need to give some to my parents since they would like some cucumbers as well. 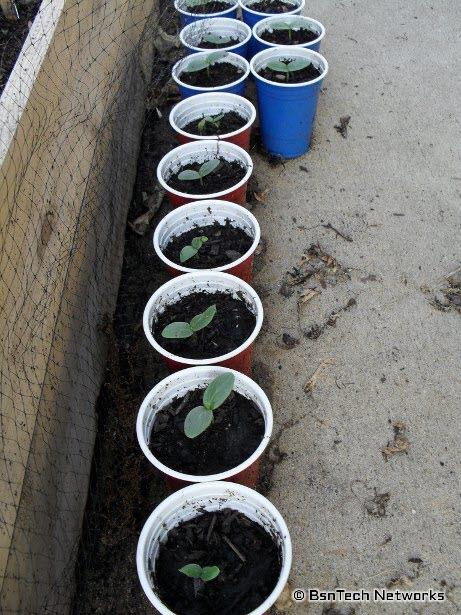 And lastly, another harvest picture.  I planted about 30 Crimson Giant radishes over a month ago.  Three of them I planted between two pepper plants and the others I planted in a square where the one broccoli plant didn't make it.

Well – I noticed today that I saw one of the radishes planted between the peppers poking out  of the soil.  Taking a closer look, I noticed all three of them had some HUGE radishes!  These three weight five ounces all together!  Last year I had such a hard time growing radishes.  Although the radishes planted in the square where the broccoli didn't survive were planted at the exact same time, they are no where near ready to be picked.  Maybe that is the secret with radishes – only plant them in rows and give them six inches apart.  Those I planted in the square were all planted three inches apart. 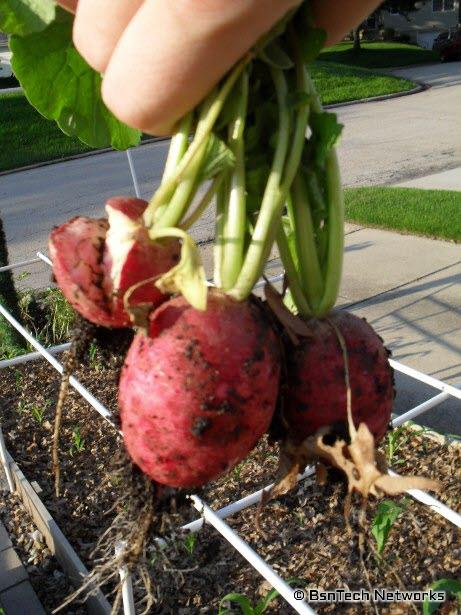 I added the radish leaves in with the lettuce that was pulled.  Yes, you can eat radish leaves.  It has been said that they have a peppery flavor.  I didn't want to just throw the leaves on the compost bin when they are good to eat as well!

I'm still quite surprised at how well the garden is doing this year.  When I went to pick the lettuce today, the leaves from the Simspon Elite plant were absolutely huge – some of them were even about a foot long!  I am really beginning to be a believer in using a pressure sprayer to spray down your plants with compost tea.  I've been doing it about once a week and everything is growing exceptionally well.