The gardening season has now ended for me this year.  We had freezing temperatures – not just a frost – on October 28th into the 29th.  It got down to about 27 to 28 degrees.  We had a very light frost a few nights ago – on October 22nd – but it didn’t damage any plants.

Because of the freezing, the rest of everything needed to be pulled from the garden.

I started with the peppers.  Out of the eight California Wonder pepper plants, I didn’t expect to have very many peppers.  Throughout the season, the peppers seemed to almost be dormant; they did not grow nearly as well as they did last year and the production was down.

However, I went out with about a three-gallon bucket.  I quickly filled the three gallon bucket with peppers just from the first two plants!  When it was all done, I ended up having over eight gallons of peppers!  Apparently when the weather turned cooler in September from the very hot temperatures this year, the peppers put on dozens of blooms everywhere.  Maybe adding epsom salt around pepper plants also made a difference. 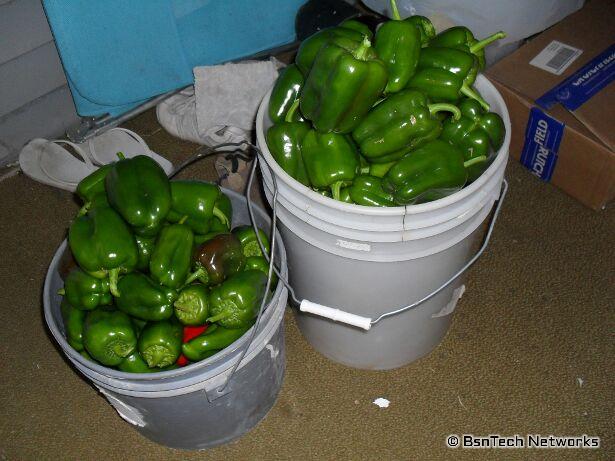 Now, look at them across the counter. 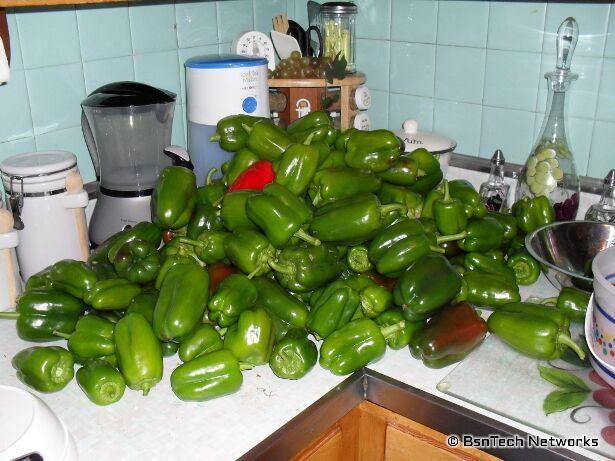 Wow!  It looks like a supermarket.  So how many peppers are there?  Well, there was a total of 146 of them.  A total of over 26 pounds of peppers!  If we were to go to the local grocery store and buy these (at a current price of $2.99 a pound), that is over $77 worth of peppers!  Unfortunately, we certainly cannot use this many.  I gave a good bucket of these to the neighbor – and am thinking that I may give at least another half or 75% of them away to the Good Samaritan Inn – which is a local day center in our community that provides food for the homeless.

Now, the peppers are all empty: 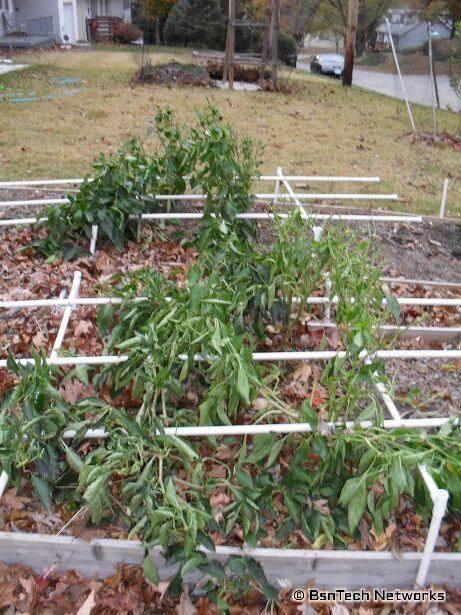 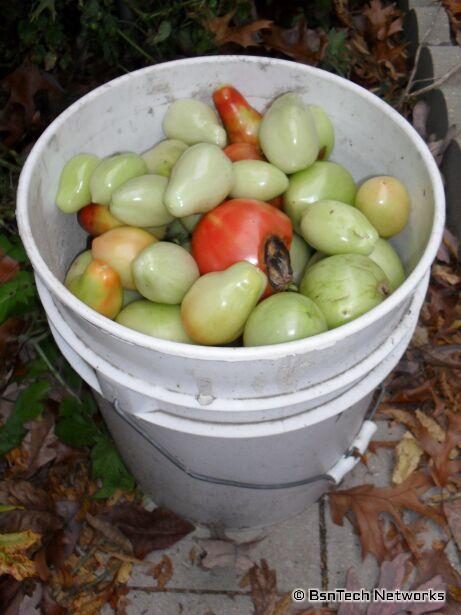 Something damaged the tomato plants quite extensively.  Last year I didn’t have that problem – although a fungus took them over.  This year, I think there was a lot of stink bug damage and something else that causes black spots on the tomatoes (not just on the bottom or top – so not blossom end rot).  Usually if we picked them just as they were turning pink, they would ripen inside and we could use them.  Otherwise if they ripened on the vine, they went bad.

So out of the year-end green tomatoes that were picked, it amounted to 19 Roma tomatoes and 82 Best Boy tomatoes.  A total of over 22 pounds. 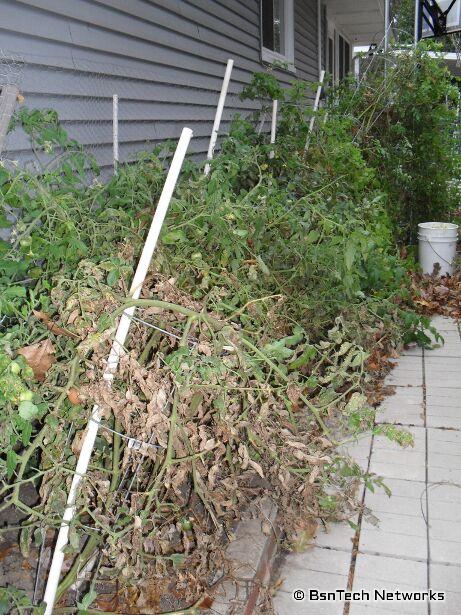 Earlier in the day, the wife spent some time and picked the red cherry tomatoes.  There was over three pounds of these and I shared half with the neighbor since we won’t eat this many.  It seems that once the end of the season gets near, we don’t eat nearly as many fresh veggies from the garden. 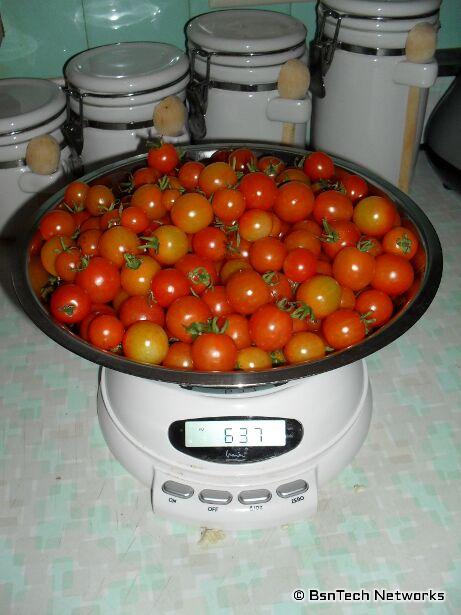 And lastly, the basil had to be picked.  First off, here is a picture of the oregano at the end of the year.  We didn’t get any oregano this year; just was too small.  Apparently it also needs a good year to get itself started.  I did see that there are a few runnings from the main plant that are rooting and starting a new plant, so hopefully we’ll have a good amount of oregano next year. 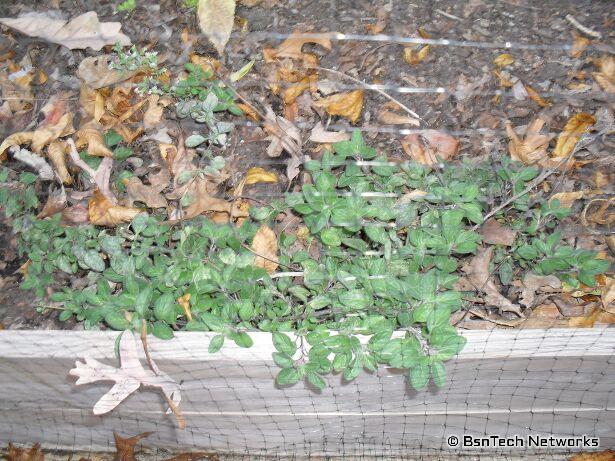 Now for the basil. 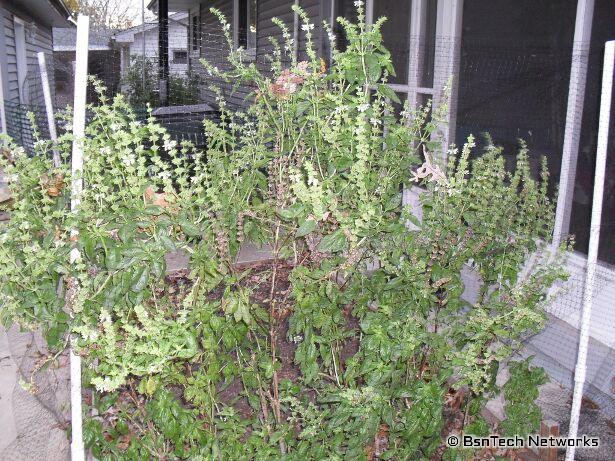 A lot of the leaves were just too small to use.  I am thinking next year I am going to attempt dehydrating full stems of leaves.  Plucking each individual leaf and then setting them on the dehydrating trays takes a good hour or more each time.  I cut down all of the plants and from all of those plants (about 15 total) at the end of the season, I kept about 6 1/8 ounces of basil and dehydrated it (which just completed just 15 minutes ago).

So, here is the full picture of the harvest before the big freeze: 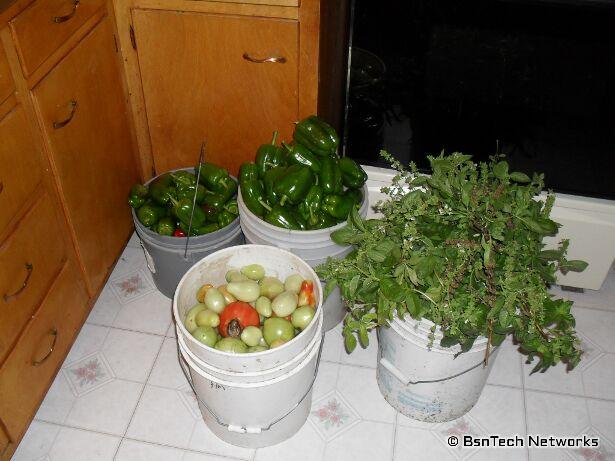 Today was cleanup day.  The plants were looking very bad after they were frozen on the night of the 28th.  All of the fences and netting have been taken down, the rebar and posts taken out of the ground, and the plants all pulled up and thrown on the compost pile.

Over the past week, I have been mulching up leaves in bulk fashion.  The neighbor has two large trash containers so I completely filled both of those.  I even had to get in the containers and stamp down to compact the leaves to fit more in there.  I also filled three large trash containers of mine with leaves as well.  I’ll eventually get as many of these leaves spread over the garden and get them tilled in; hopefully before winter hits.  That will help to add a lot of organic matter and fertilizer into the ground.

Anyways, enjoy the pictures below of the year-end garden cleanup.

Below is the grape arbor / grape trellis.  The grapes vines have fully went into hibernation. 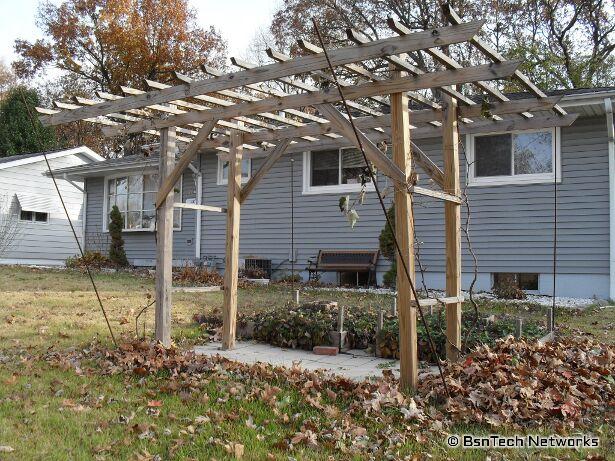 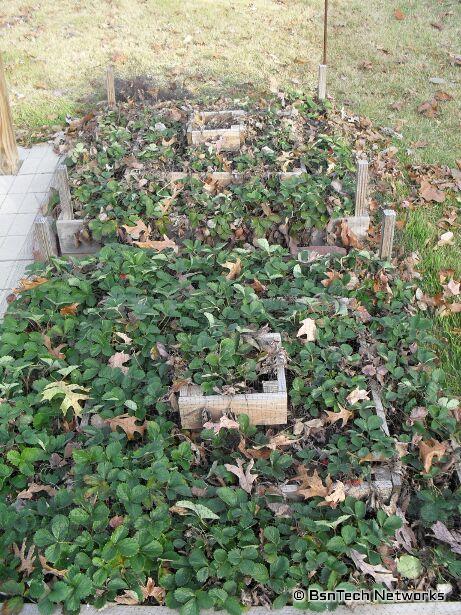 The garden behind the garage with everything removed. 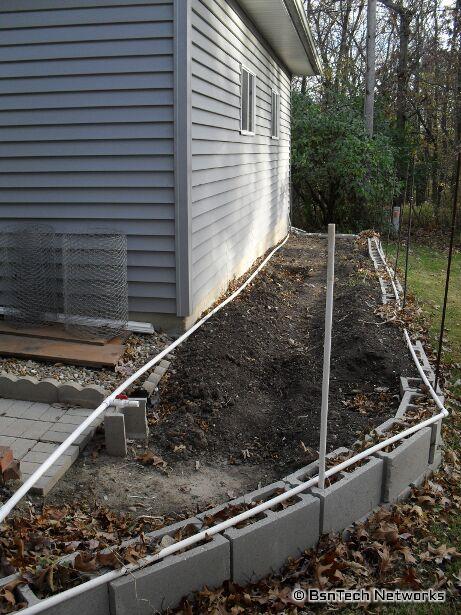 Garden next to the house where the tomatoes were. 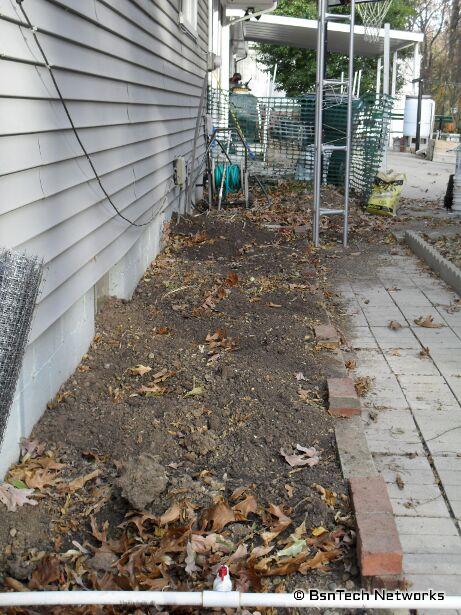 The patio garden where the herbs were grown. 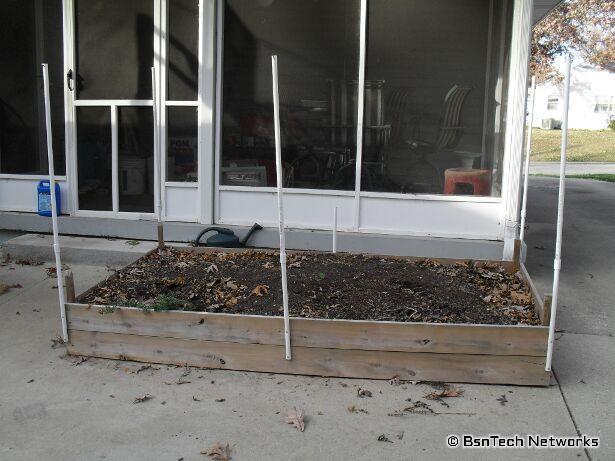 The carrot bed.  One carrot is still hanging in there along with the radishes that were planted over a month ago that never did anything.  I’m sure the deer will take care of these tonight now that they are uncovered from the deer netting.

And the front garden with all of the PVC pipe removed for irrigating the garden.  No more peppers and the large marigold plant that took up home has also been pulled.  The one large radish plant still exists in the front – which is where I harvest the radish seed from.  Maybe I’ll get some more seed soon. 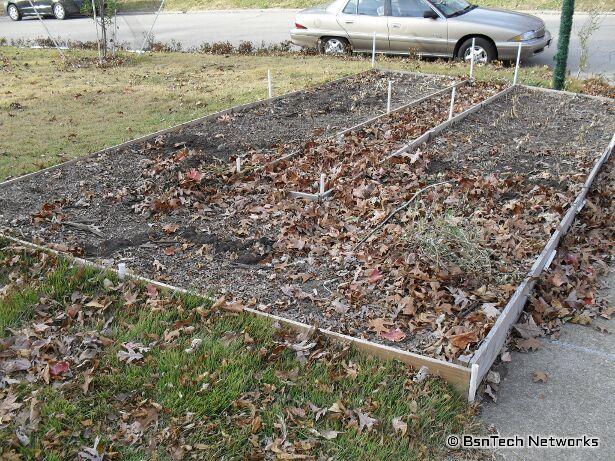 And lastly, the big compost pile with the pepper and tomato plants added. 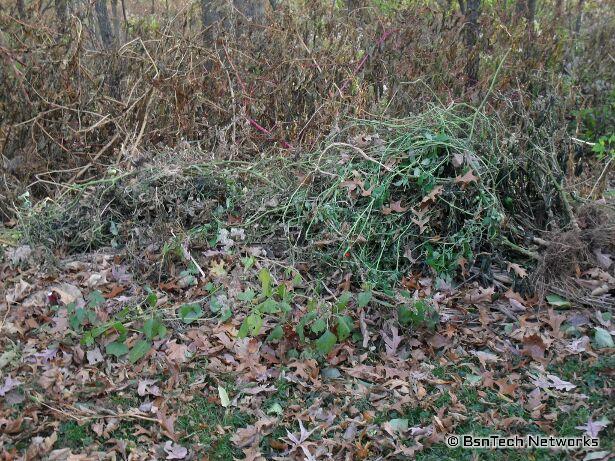 I’ll now need to go through my journal – and also make an electronic copy of it here on my blog (like I did last year).  I need to tally up the totals from all of the produce this year and see how it compares to last year.  Then comes the planning for next year’s garden!