So it has been a week since I planted the original lettuce in the rubbermaid container (previous blog post).  Not one of them has sprouted.

I am thinking that it is because I planted them too deep.  Lettuce should only be planted about 1/4 inch deep because of the very tiny seeds and they need to get to the surface quickly.  When planting them in the rubbermaid box, they probably were planted at least 1/2 inch to 3/4 inches deep by the time I put peat moss over the top of them.  I have been religiously spraying the container twice daily to keep it moist – but nothing has happened.

Therefore, it is time for experiment number 2 – growing lettuce under lights.  I had been looking over the GardenWeb “Growing Under Lights” forum and was asking questions about what fluorescent bulbs would be best to grow lettuce.  One individual told me that warm white was best – but others had their own opinions as well.  Previously I used the standard Gro-Lux bulbs coiupled with a Cool White Plus bulb by Sylvania.  The Cool White Plus bulbs are 40 watts each with about 2950 lumens.  I can’t recall the rest of the information on that bulb right now.  I used one Gro-Lux bulb and a Cool White Plus bulb in each of the two fixtures I used for the seedlings earlier this year.

I then made a box out of some old paneling and some of the treated wood that was used around the potato bin.  The pieces from the potato bin were six inches high by 2 feet long – so I had to put two of the boards together to make them four feet long total.  I just didn’t have any perfect planting box that would make use of all of the fluorescent lights to maximize space – so building a box was best.

So the box was 4 foot long by 6 inches tall.  I then used the paneling on the bottom and on the sides – the box was about 14 inches wide (well, about 12 inches after the sides were attached).  I then just used a staple gun to staple all of the pieces together.  As you can see in the pictures below, I then used plastic to surround the box – the bottom and the sides – so that water will not leak out anywhere.

I then planted Simpson Elite lettuce every four inches in hopes that at least half of them will sprout.  I put all of my seeds in a butter container and put them in the refrigerator – hoping to increase the life of them.  Therefore, I’m hoping with the first indoor container that I just planted them too deep – but this time we will see how viable the seeds are.  They were all planted at 1/4 inch with light soil placed over the top and then sprayed down well. 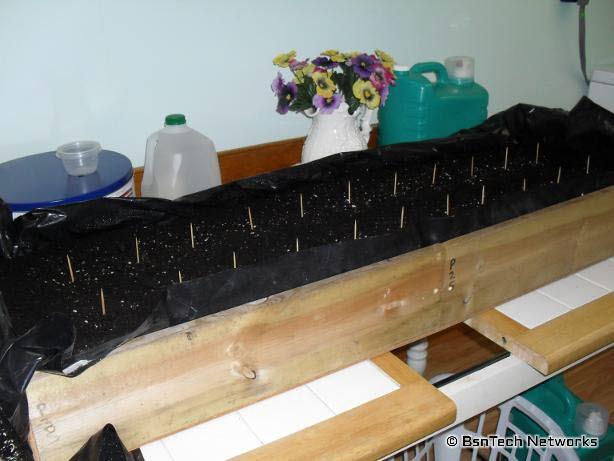 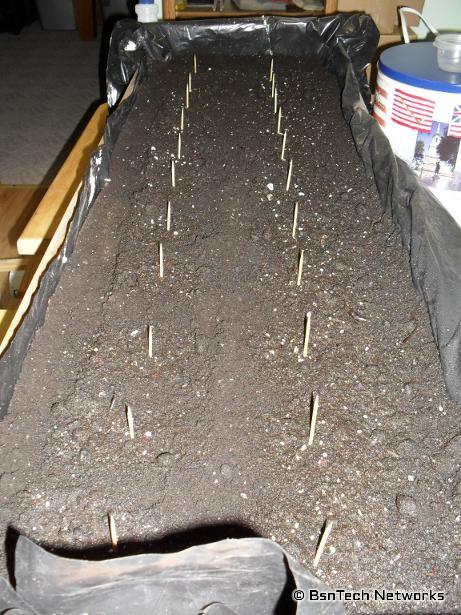 The toothpicks above show approximately where the seeds were sowed – so I have an idea if there was any weed seed in the organic soil mix that was purchased.

And here is the full ensemble with the two light fixtures over the top.  I turned the fixtures on just for the photo – but they will not be turned on until the first seedling emerges.  The lights on plugged into a surge protector power strip – and then plugged into a timer that will turn the lights on daily at 7 am and off at 7 pm. 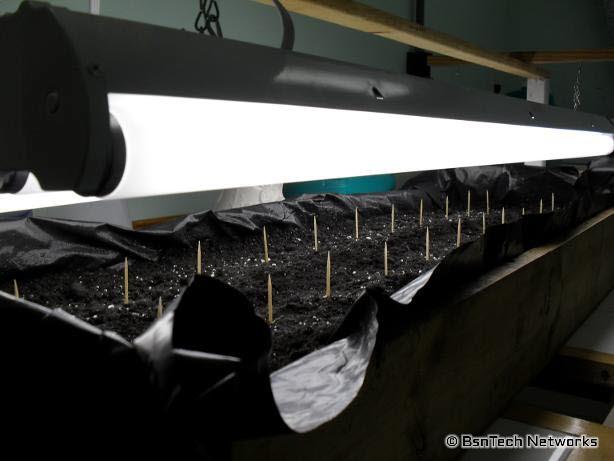 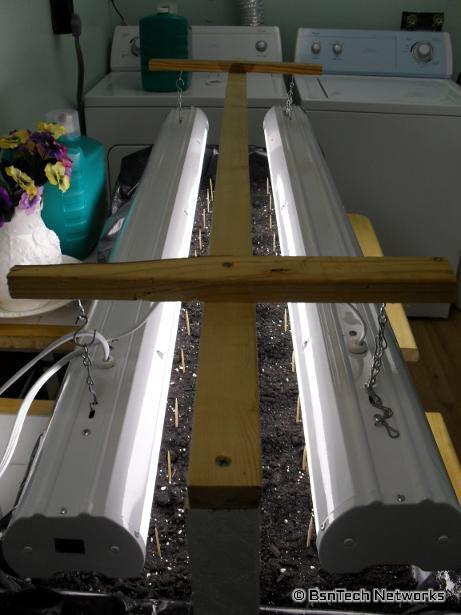 The Growing Lettuce Under Lights experiment is working very well – unlike the Shady Lettuce Experiment which is pretty much a bust.

I placed toothpicks next to each of the seeds sowed – and there are already 50% of them that have sprouted – in just five days!  I didn’t have the lights on for the first three days because there weren’t any sprouts.  The first sprouts occurred yesterday – and there were about three or four of them.  Today, there are now eleven of them.  I have removed the toothpicks from the spots where the spouts have occurred. 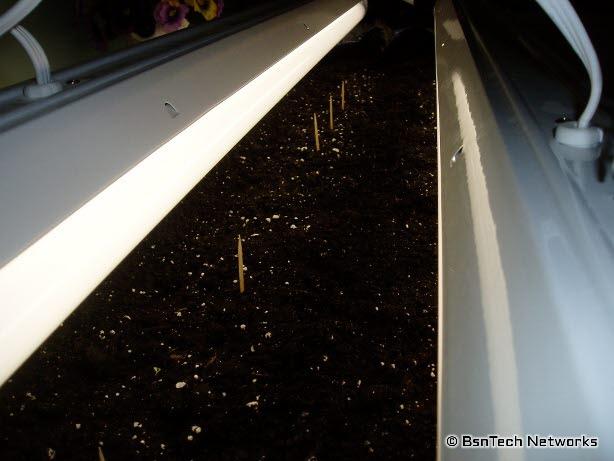 You can just barely see on small sprout in the picture above – underneath the bottom-most toothpick by about two inches.

Here is a closer look at one of the sprouts.  The leaves have already unfolded to receive the light from the fluorescent bulbs. 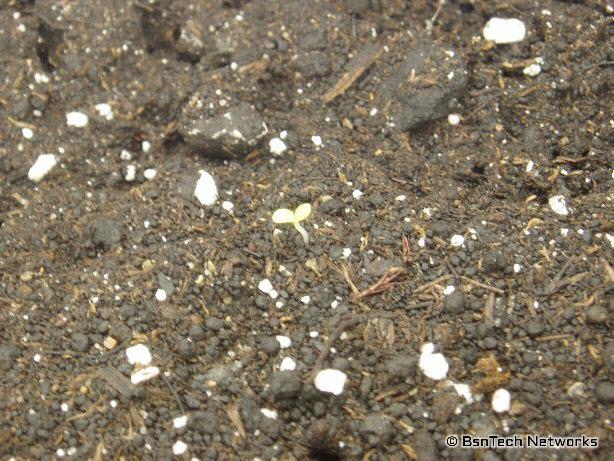 Out of 22 Simpson Elite lettuce that were planted,  13 seedlings have emerged and are doing quite well.  The seeds were purchased back in March/April of this year and have been kept in the fridge.  Lettuce seeds are known to only last maybe two seasons – and this shows it by only having a 59% germination rate.  At any rate, the little seedlings are doing very well.  I moved the seeds so they are all eight inches apart now and four inches between the rows.  I have one extra plant that I am keeping just in case something happens to one of the other ones. 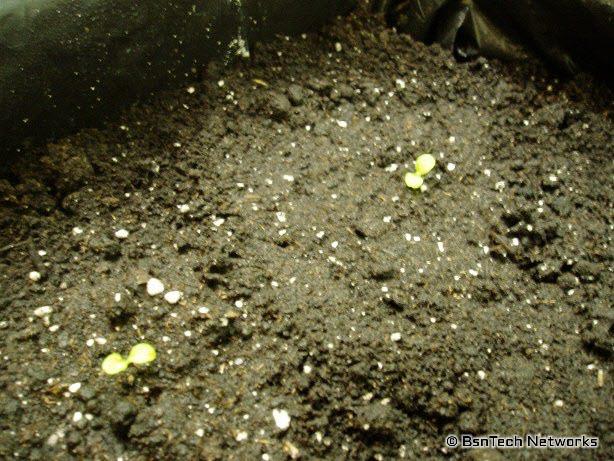 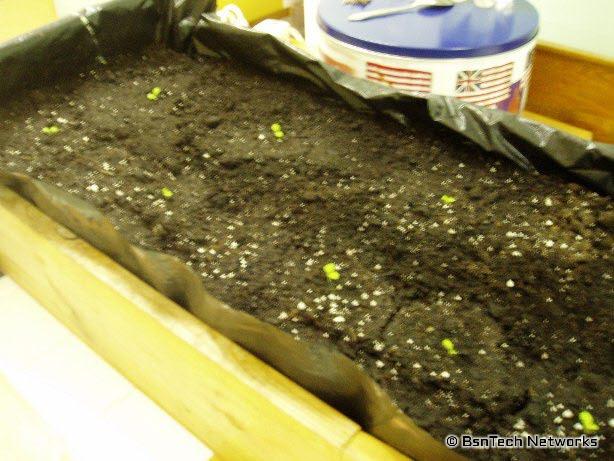 At this point, I’ve pretty much thrown in the towel on the shady lettuce experiment.  This week though, two more lettuce seedlings sprouted in that container.  The lettuce is just too stalky and when I water them, they just fall over.  But, I’m still keeping it going although I don’t expect anything.

However, the growing lettuce under the fluorescent lights experiment is still going very well.  All of the plants now have three or more leaves. 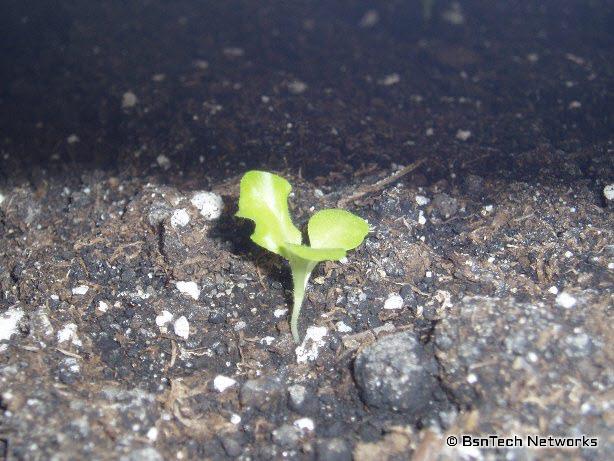 The lettuce plants have doubled in size in the past seven days (one week)  The Simpson Elite lettuce is now 21 days old.  The package says that they will be mature and ready for harvest in about 60 days.  Somehow I don’t beleive this will be the case with growing them under lights.  Here pretty soon I’m going to be required to make a decision on how to start the seeds for the real garden.  The Copra Onion seeds will be started around the beginning of February.  This means I’ll have to buckle and probably purchase more fluorescent fixtures for them – which isn’t what I would like to do.

In addition, I have removed two of the four fluorescent bulbs from the lettuce growing experiment.  The two rows of lettuce is directly underneath one of the bulbs on each fixture.  So, this will reduce power usage down to 80 watts from 160 watts. 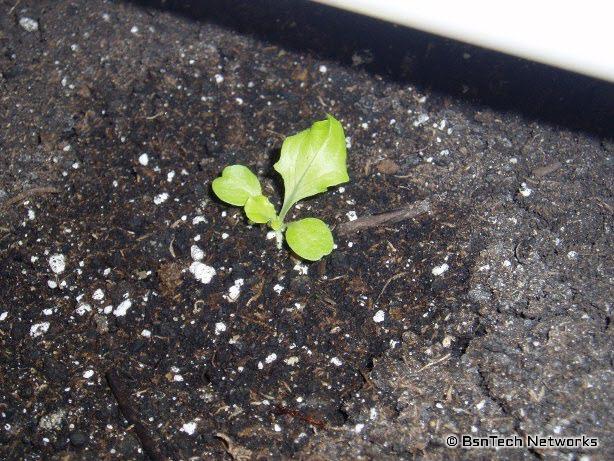 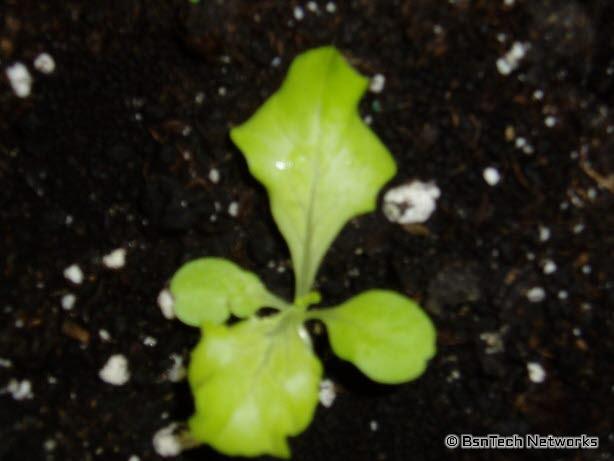 The lettuce has really grown yet again!  One of the lettuce plants really needs to be “thinned” because there are three of them that are four inches apart from one another – and all the others are eight inches apart.  I just cannot get myself to do it because it is one of the better-looking plants!

Something I did a couple of weeks ago was to remove a fluorescent bulb from each of the two fixtures – as noted in the last post.  So far this doesn’t appear to have made any kind of difference in the growing of the lettuce. 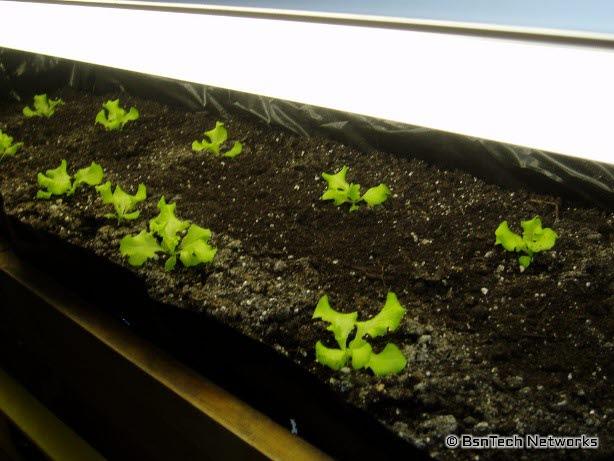 Curtis – who commented below – motivated me to make an update to this experiment.

It has been a good 20 days since my last update on this.  Sine then, the lettuce has doubled or tripled in size again.  However, the lettuce is now about 60 days old, and according to the package, I should be able to start harvesting the lettuce by now.

Nope!  The lettuce just is not big enough yet.  I still am running only one 4-foot Premium Cool White fluorescent bulb (3300 Lumens, standard Cool White bulbs have 3000 lumens) in each of the two fixtures.

At this point, I am about ready to scrap the project.  The amount of electric required to grow the lettuce almost is not worth the effort.  The lights are on for 12 hours a day and consume 80 watts of power between the two bulbs.

Today I moved the fluorescent lights down to be just about one inch from the top of the lettuce.  I’m not sure how much longer I will keep this experiment going since it doesn’t have great results.  On top of that, I may need the box that the lettuce is growing in to start more seeds for the main garden outside before long! 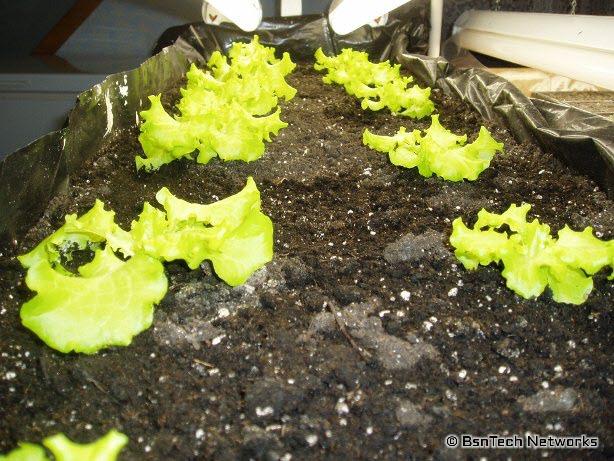 Today the lettuce was all harvested and the lights taken down.  At this point, it is safe to say that growing lettuce indoors does not do as well as growing outside.  This may be due to several factors – availability of real sunlight, availability of carbon dioxide, and possibly fertilization.  I did not fertilize the lettuce at all because I purchased brand new soil mix that already had fertilizer added.

The lettuce was always watered with rain water that I had in gallon jugs.

Overall, we got two nice salads out of it last night plus there is still enough left for maybe two more salds tonight.  But, considering that 80 watts of power is used for 12 hours a day, there was a lot of electric usage for this.  The lights were on 12 hours daily from December 20th until today – so quite a long time.  The lettuce started off with four fluorescent bulbs and then I removed two bulbs on January 14th (which meant from December 20th to January 14th, there was 160 watts of power used daily for 12 hours) .

The lettuce was quite good and was not bitter.  It was interesting to see that the lettuce had a very small root system – nothing like what it is if planted out in the garden.  Then again, each lettuce plant in the garden yielded about a pound of lettuce – whereas these plants in this experiment yielded less than a pound for all 13 plants. 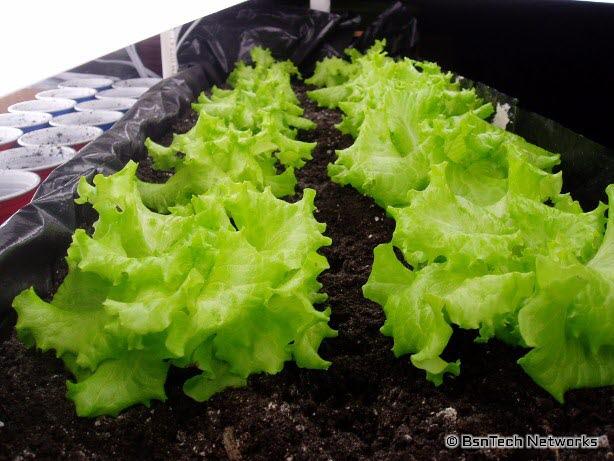 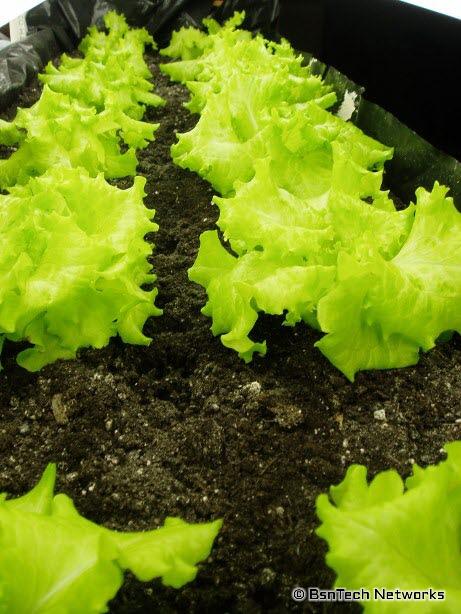 As you can see, the lettuce really did grow well in the past 30 days, but the amount of electric and effort to grow lettuce indoors is not worthwhile from what I have found out.