Fall has arrived at the BsnTech garden!  As was said on the news on Wednesday, approximately 10:07 pm CST was the marking of fall.

Before starting with the garden stuff (since it is mostly the same stuff anyways), let me start with the update for the real wine we made from our own pressed grapes.

No extra sugar was added to the grape juice – and because it was a very small batch (less than a gallon), the yeast have already done their work.  They actually were done in less than a week!  The air lock stopped bubbling at this point.

Remember when the wine looked like this starting out – less than two weeks ago? 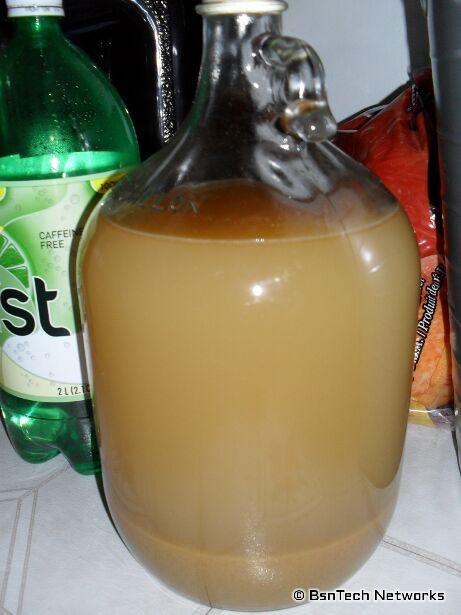 I had my reservations and doubts that the wine would clear up myself after seeing such opaque juice.  You couldn’t see through it at all!  You can also see all of the sediment at the bottom as well – and this was on the first day! 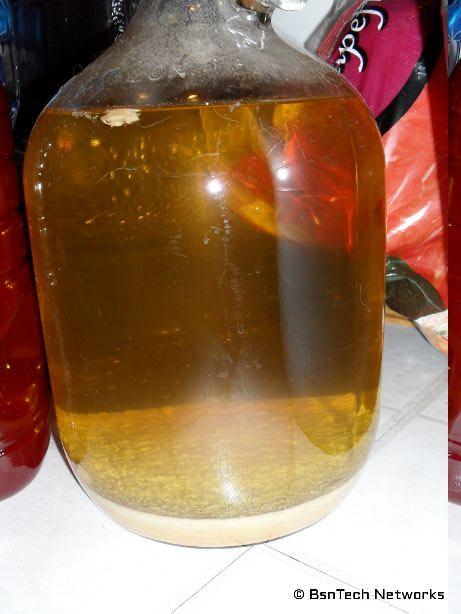 That is absolutely amazing!  It looks like real wine now – in less than two weeks!  You can see right through it.  The sediment at the bottom has also compacted as well – so we may be able to get three 750 mL bottles of wine out of this afterall!

In regards to the garden, more basil was plucked off the plants a few days ago.  It amounted to just over six ounces total.  Unfortunately, the Nesco American Harvest dehydrator cannot hold that much basil!  With all eight trays completely filled, I may have put just over five ounces of basil on.  This is the second time I’ve picked too much that wouldn’t fit on the trays.

The basil seems to take a good week at 95 degrees to fully dehydrate in the Nesco American Harvest dehydrator.  Of course, you also have to realize that the dehydrator is at full capacity with eight trays.  When I first started out with only four trays, this time was cut in half.  But, I would prefer to cut down the basil in larger batches and do it all at once instead of cutting and loading the dehydrator twice.  It is about three days into the dehydrating process and here is one of the trays: 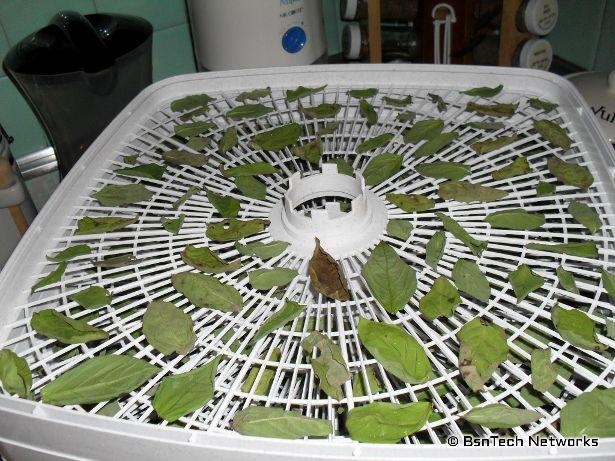 After about four days, I will flip the trays to get a more even drying.  So the top-most tray (which is pictured above) will go to the bottom, second top-most tray goes to be the second from the bottom, and so on.

After picking six ounces of basil, there is still all of this left: 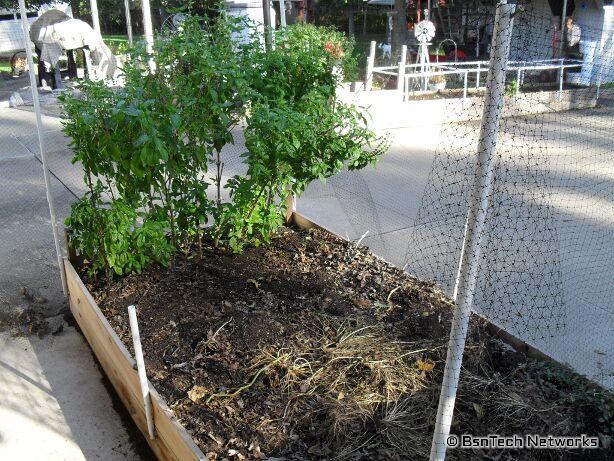 I cleaned out this patio garden a bit this evening – but I did so after taking this picture.  All of the dead stuff is the parsley; I didn’t see any point in keeping the parsley – even though it grew very well.  So I just ripped it out and placed it on top – but I finally cleaned that up to make it look more presentable and placed it on the compost pile.

Moving on – green beans!  All of the Greencrop green beans that I planted in the front garden after the corn was done seemed to have a bad death.  Either the deer got to it, the heat killed it, or the bugs obliterated the leaves.  Well, there is a little bit of growth coming back now that the temperatures have been in the low 80’s/high 70’s lately – and there is even a green bean on this plant! 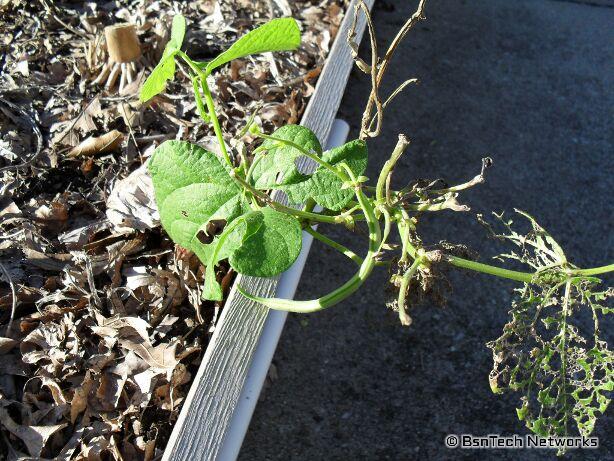 Here is one from the back garden.  In the back garden, I buried all of the green bean plants (which may have still had some full beans on them that germinated) after I dug up all of the potatoes.  This one is growing very well and has several flowers on it. 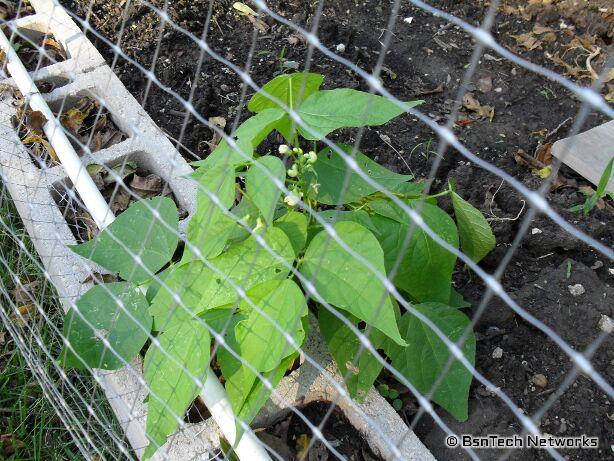 Even though they are making a comeback, I don’t believe I’ll grow Greencrop again.  The reason I chose them was simply because out of all bush green bean varieties, these had the longest green beans – which I figured meant a larger yield.  Nope – they just didn’t do well (although the heat didn’t help).  Even when talking to some gardeners at work, they all stay with the Blue Lake variety – which is what I planted last year and had over 50 pounds of green beans.  From the Greencrop variety this year – we may be lucky to have five pounds.  I’ll be returning back to the Blue Lake varieties for next year.

With my previous post, I mentioned how to save radish seeds.  I also mentioned that I was going to test the seeds in the carrot garden to see how the germination went.

Well, after about five days, the radishes germinated.  Out of 24 that were planted, 13 of them germinated – a 54% rate.  My goal was 50% – so it did surpass my goal (barely), but I would have really liked a higher rate.  Yesterday I planted another 24 radishes from that same saved seed batch – so we’ll see how this second batch does.  Anyways, here are the radishes so far from that batch that was planted last week: 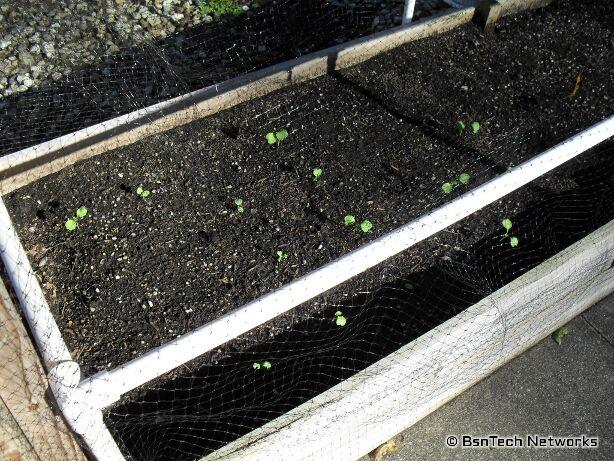 The carrot that seemed to start growing after I pulled the other carrots still is growing strong: 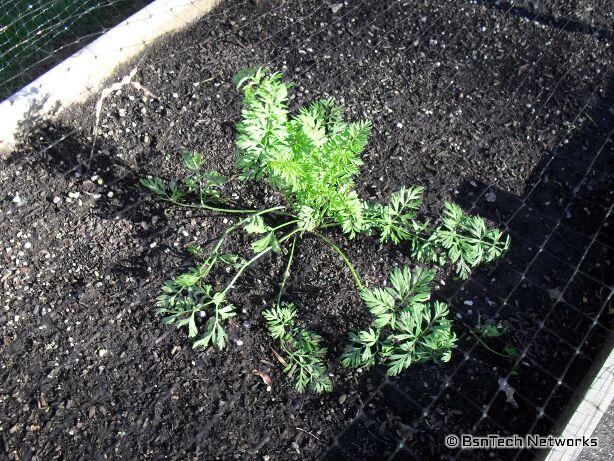 Next year I plan to stick with non-hybrid carrots.  Last year I grew Burpee A#1 carrots.  This year I grew the A#1 carrots and Sugarsnax carrots.  When looking online at the FedCo Seeds inventory, you get considerably less hybrid carrot seed for the money compared to what you get with the open-pollinated, non-hybrid seeds.  Next year I am going to plant Danvers carrots (which I’ve also begun testing in my seedling trays).

OK – since I mentioned testing in seedling trays – yes – I’m testing some seed viability.  I have four plots of 18 seeds each.  I’m testing the saved Sugar Snap pea seed, the Basil seed, the California Wonder pepper seed (that was saved from last year’s harvest), and some Danvers carrot seed that I’ve had for a few years in an unopened package. 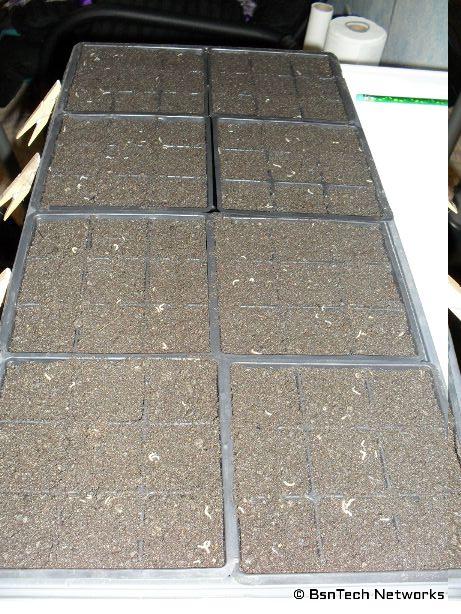 Eww – what are all those things on the top of the soil!  I wonder if they are maggots.  They look like little tiny white worms; maybe 1/2-inch in length at the most.  I got all of this soil from the back garden where the potatoes were growing.  I sifted through it to get really nice, fine soil for putting seed starts in.  None of them were there when I did this – but now it seems like the area is crawling with them!

Cucumbers are beginning to taper off.  Well, the Burpee Pickler cucumbers are pretty much completely gone at this point, but the Straight Eight cucumbers are doing well – and just had a nice one I picked today. 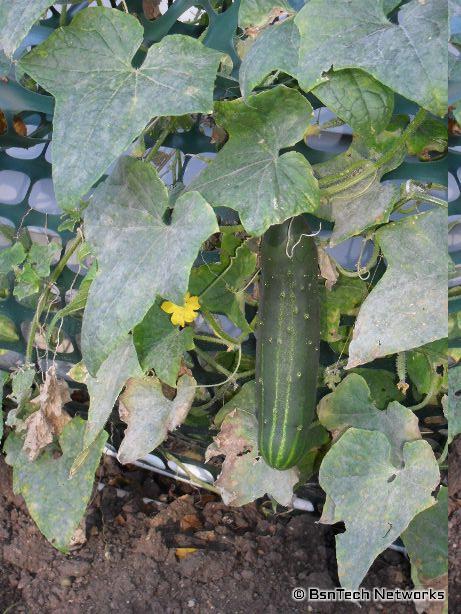 The peppers in the front have taken off now that the weather has turned a bit cooler.  They have a lot of blooms on them as well. 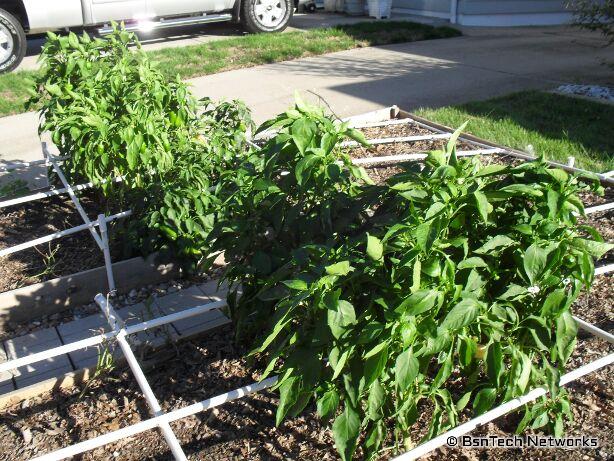 The Tri-Star strawberries are bouncing back – but we definitely won’t have any additional strawberries this year.  At least we got an exceptional amount of strawberries in the spring.  We’re still using all of the strawberry jam we made and it simply cannot be beat! 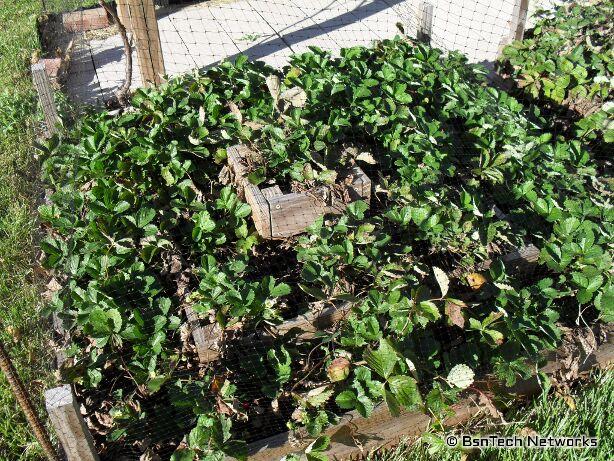 And to the last live plants in the garden – the tomatoes.  The tomatoes are quite infested with white flies and stink bugs.  I believe that is what is causing the tomatoes to rot and get black spots on them.  We have to pick all of the tomatoes just as there is any hint of pink on them – otherwise it seems like the bugs feast on them!  Sometimes it looks like there is a big chunk taken out of the tomatoes while they are green – so those are goners.

Overall, I bet we’ve lost a good ten pounds of tomatoes because of rot and bug issues.  I am not one for using pesticides in the garden – but next year I may just try to use some Sevin on the plants if they come back.  I haven’t had any kind of problem before with bugs – but this year the tomatoes got them bad!  It is also probably my fault for putting the tomatoes so close together; they were planted every two feet so they are really cramped in. 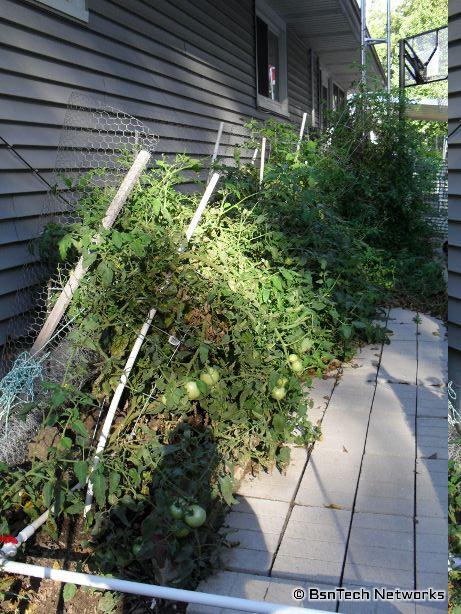 Plenty of green tomatoes left on the vines!  Last year the tomatoes got a bit of fusarium wilt – so there were not any green tomatoes by the end of the year – but this year they are doing well – even though the bugs are getting to them.

Lastly, the produce for the day: 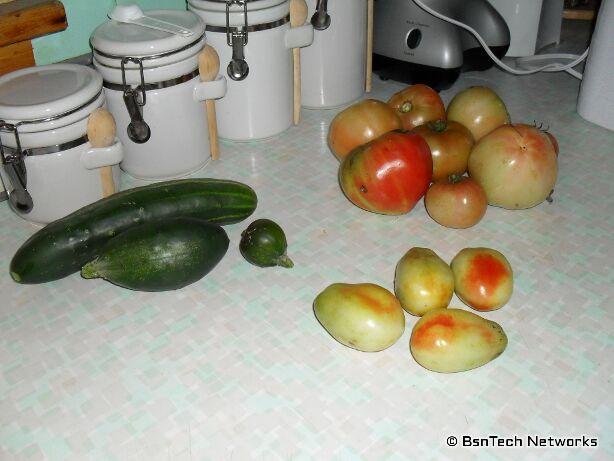