Didn’t do much in the garden this weekend except kept it watered.  It has been exceptionally hot in Central Illinois.  Over the course of the past week, it has been in the 90’s – with maybe a day or two just shy of that.

The garden and cool weather crops, like the lettuce, isn’t having any part of it.  During the hot part of the day, the lettuce outside is droopy and looks sad.

The lettuce has turned bitter unfortunately.  Barely got two pickings of lettuce out of the garden this year.  However, I found a post online that you can remedy bitter lettuce.  The last batch (shown below) that was picked Sunday morning, I put it in ice water and put in some baking soda.  It seems like it did help and some of the bitterness was taken away. 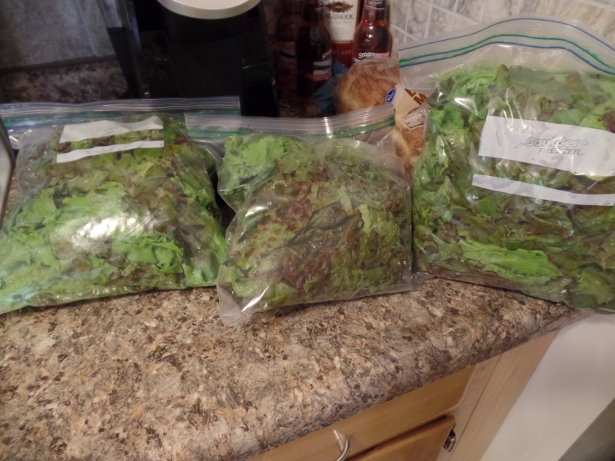 After letting it sit in the baking soda and ice water for about an hour, everything was cleaned.  Sat out to dry for a couple more hours and put in three gallon bags.  We still have about two bags left from the prior harvest, so I ran up to the store to get a couple of onions, some mushrooms, more salad dressing, and olives.  Going to have some big salads this week for dinner so we can enjoy fresh lettuce before it goes bad.  Lettuce seems to stay OK in the fridge for about two weeks.

So, here is what the lettuce bed looks like now, that the plants had a hair cut. 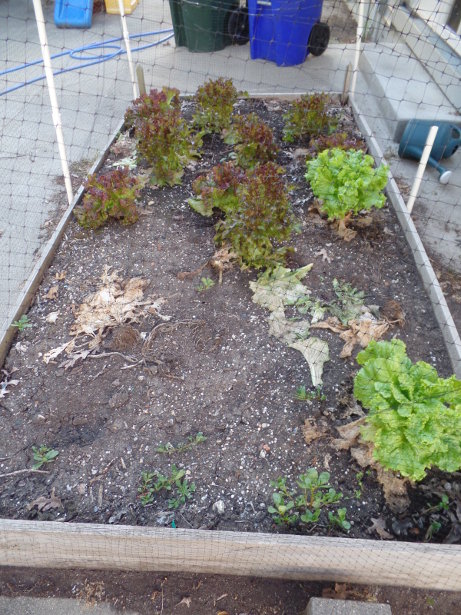 The Parris Island lettuce plants were already pulled out (couple dead spots in the photo above).  Those really are plants that you pick the whole thing at the same time.  And, the beaver (or whatever creature it was) already enjoyed those plants before we did.

Peas – I got a small bowl of Cascadia Snap Peas – even though the creature certainly stunted the peas as well.  Usually, the peas go to the top of the chicken wire fencing, but they didn’t even get half-way up this year.  So, at least I got a small bowl of peas though.  Fresh snap peas out of the garden are fantastic on salads too. 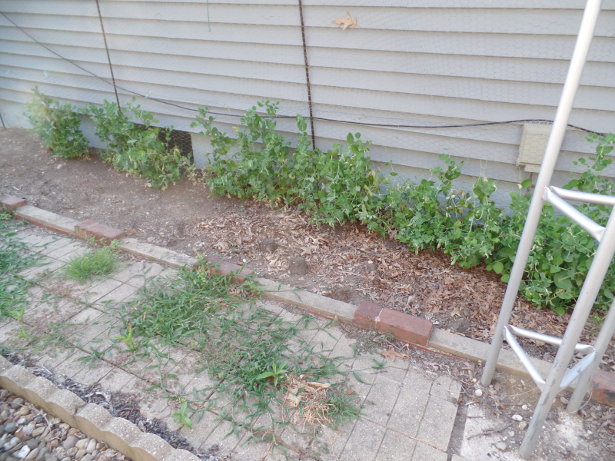 The back garden looks awful.  The tomatoes still are pushing through all of the weeds.  Just lost my interest in the back garden with the overgrowth.  And, only about a half dozen peas came up in the back. 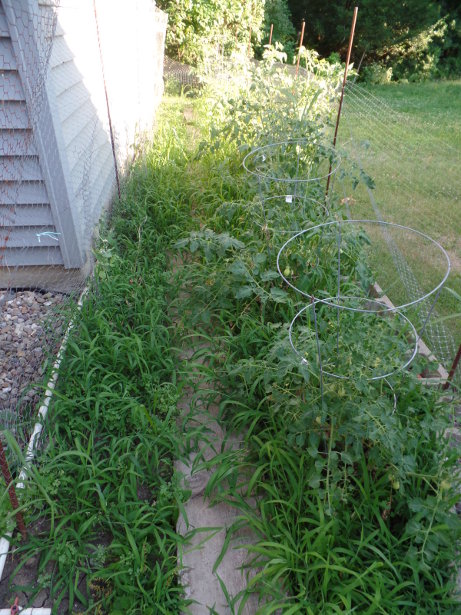 Back over on the driveway, the onions are beginning to bulb out now.  The days must be long enough for that to happen.  I had to buy some onions for the salads this week, but that should be the only ones needed until ours are ready to cut down.  There are a few onions in the back of the garden bed that should be cut as green onions though – as they were planted too close together. 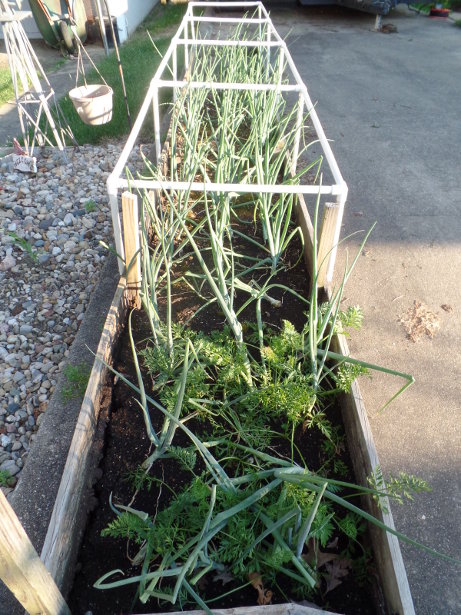 Front garden – had a mis-hap this week.  Woke up mid-week and found one of the posts in the front knocked down (the one to the left of the picture below, not in the picture though).  Upon closer inspection, large prints in the garden and a lot of the green beans had been chewed!  What creature was it?  The darn deer!  Tell you what – I go to great lengths every year to try and protect the garden – but the deer always cause problems.  I still don’t know how they got into the garden.  The deer netting is seven feet high. 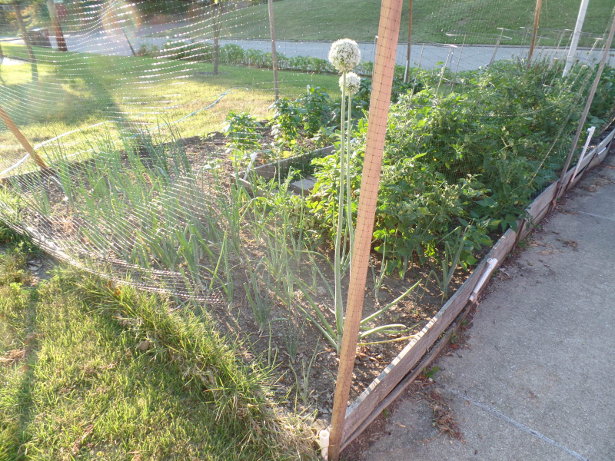 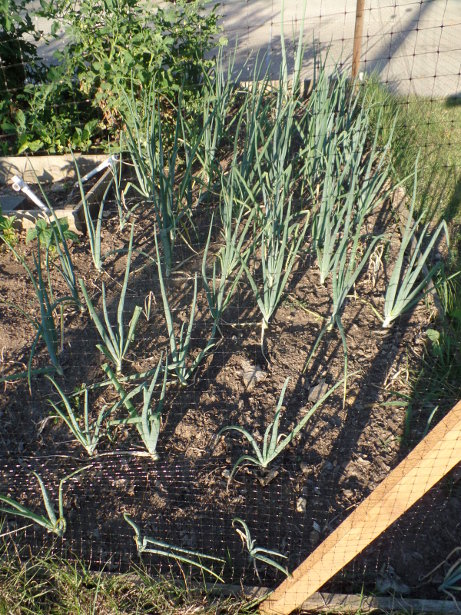 Down the pepper row, you can see that many of the green beans are still intact and are doing OK.  Not all of them got chewed on, but some here and there are missing some leaves.  The peppers – they are doing very well.  They are loving this heat! 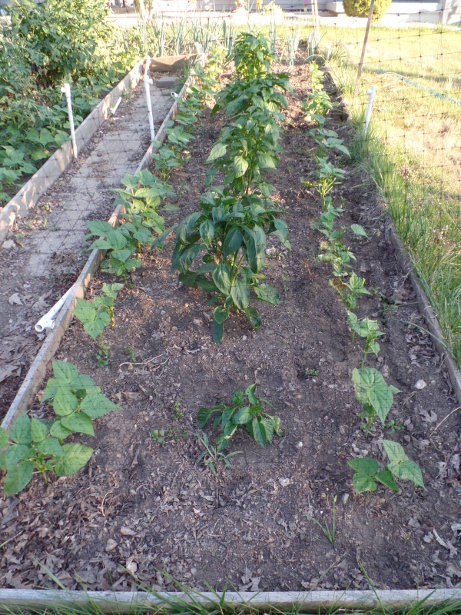 And a close-up look of a pepper plant – there are two small peppers starting already.  Almost all of the pepper plants have flowers on them already as well.

And down the tomato row, they are overgrowing the green beans! 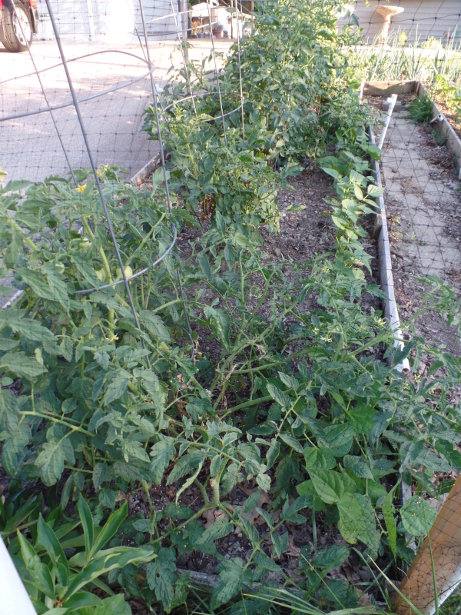 And – lots of tomatoes are growing on these plants as well.  Here are a few Roma tomatoes: 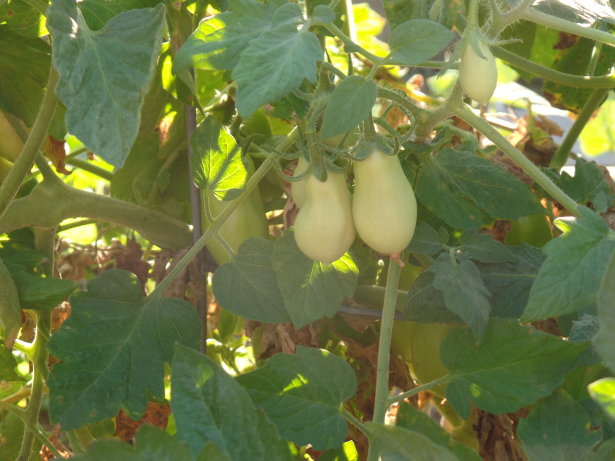 Potatoes – didn’t take a photo of them.  Some of them are already turning yellow though – and the deer also gave several of them a haircut.  But, deer may not like potato plants.  I usually put netting over the top of them, but this year I didn’t.  For the most part (even though shrubs and the front garden was eaten up), the potatoes only have a few nibbles on them.