Just yesterday – we picked our first batch of green beans.  Last year, we used the Greencrop variety – and they did terrible.  This year, I went back to the old standby – Bush Blue Lake 274 – which did well the year prior.  Out of maybe 15 plants, we got over two pounds of green beans!  There were about six or seven plants in the watermelon bed in addition to another six or seven up front that were harvested. 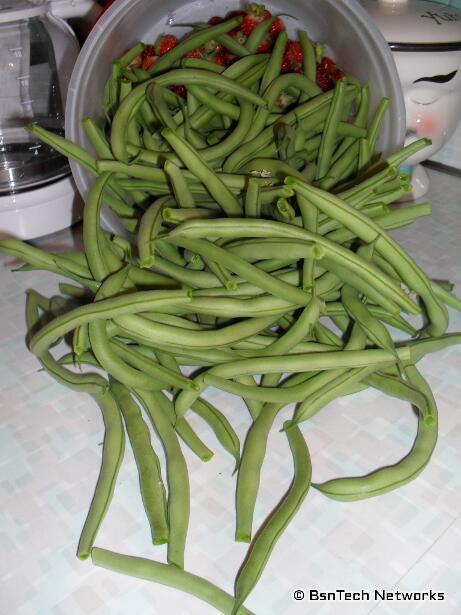 As you can see, there are also some strawberries in the back.  We got another 9 ounces of strawberries on Friday as well.

In addition to the green beans and strawberries, another pound of Cascadia Snap peas were harvested.  It is kind of interesting – because in the past two weeks, there has been over five pounds of peas harvested – which is probably pretty close to what was collected for the other 1+ months! 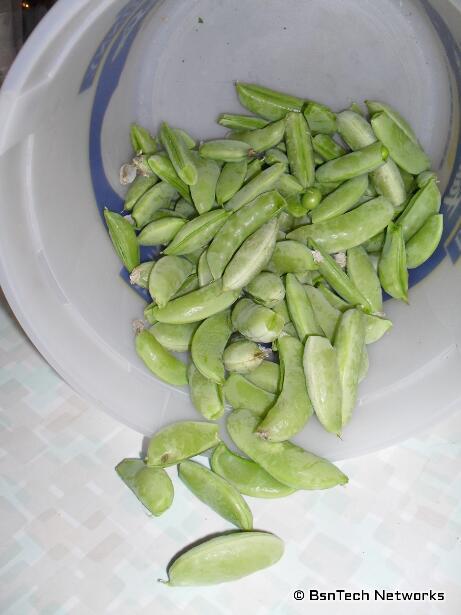 Unfortunately, the peas are getting powdery mildew pretty bad.  The peas next to the house were pulled out a few days ago.  So, the only thing that remains next to the house are the potato plants that were gasping for sunlight – and a few broccoli plants. 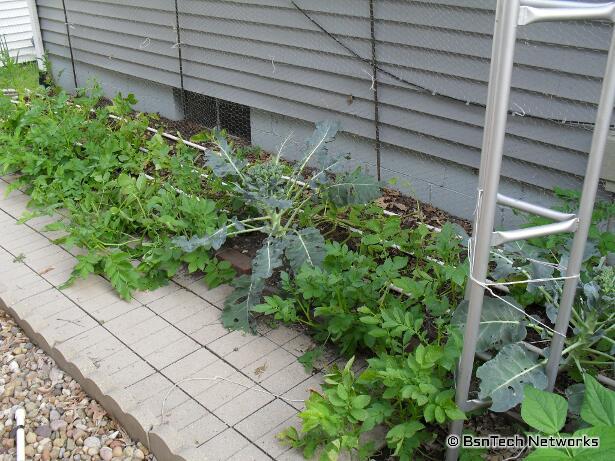 In the back garden, the potatoes don’t seem to be growing much more – but have made it nearly impossible to walk.  The peas back here are also looking poor – and they will probably get pulled out this evening after it cools down a bit. 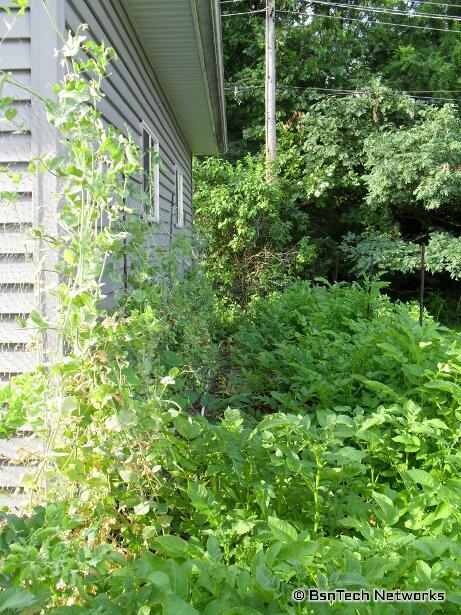 What else is new?  The Crimson Sweet watermelon.  As I was pulling green beans last night, I saw a tiny watermelon that was beginning to start!  I didn’t get a picture of it – but it was sitting on the sidewalk because the watermelon have completely overtaken the 3 x 8 bed they were placed in – and have overgrown to the sidewalk as well. 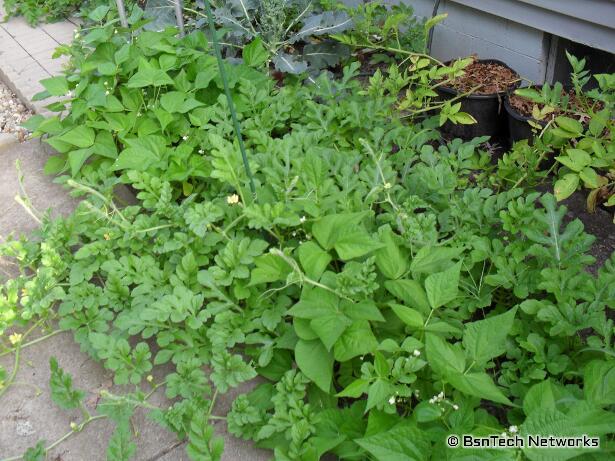 The Anaheim Hot Peppers in the tote are doing well.  They grew exceptionally quickly – and there is at least a half dozen peppers on the two plants thus far – with another dozen or more blooms. 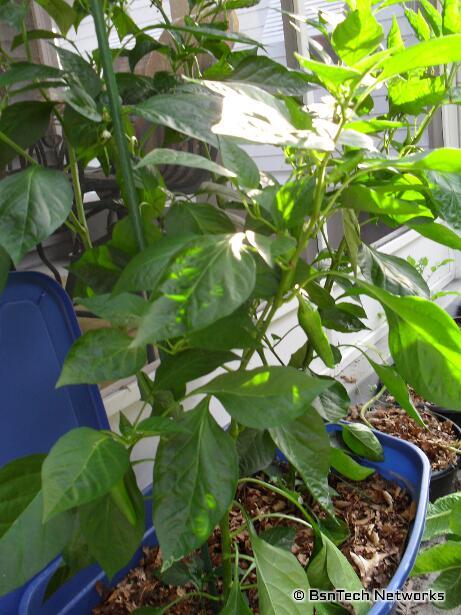 The California Wonder peppers in the front garden are doing better now – but still not nearly as tall as the Anaheim peppers.  There is even some blooms on them as well – and a small pepper is growing on one of them.  Didn’t get a picture of it unfortunately.

Otherwise, the rest of the patio garden looks to be in dis-array.  The basil is growing well – not as well as last year though – and the Easter Egg radish plants still have large seed pods that are maturing.

Most of all the lettuce has been removed – but some remains.  I need to get the rest pulled out because at this point, I don’t think any of it is edible.  I probably need to get started on seeding the next round of lettuce for the fall soon as well. 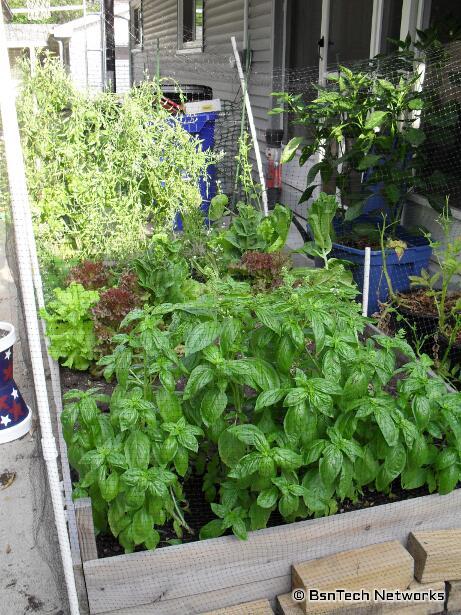 How about the carrots?  Well, they’ve really moved right along as well. 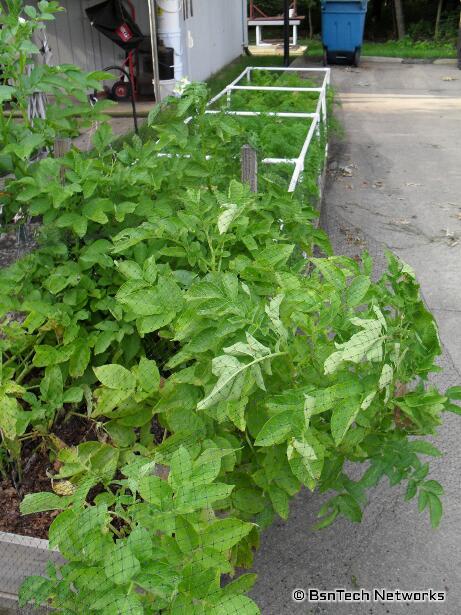 This is a closer look of the carrots.  Those on the left are Sugarsnax and those on the right are Scarlet Nantes.  Can you tell the difference?  I certainly can; the Sugarsnax seem to be further along and are growing better. 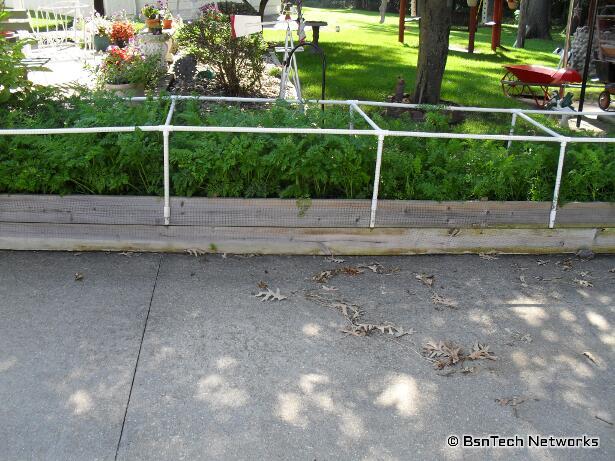 Going to the front yard.  The grape arbor is overflowing with grape vines.  Hard to believe that it is all from two vines.  Here is a close-up of some grape clusters from the Flame Bunch grape vine. 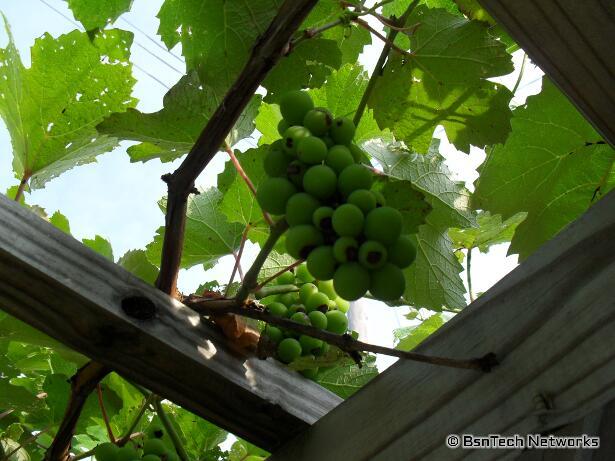 The corn is doing MUCH better than in years past.  I finished filling out the bed with mulched leaves last weekend so the entire bed is now full with leaves to keep moisture in – and help to fertilize a bit.  I went out and pollinated about 15 stalks – and many of those stalks put up a couple of different tassels.  Out of the 15 stalks, there are a total of 28 ears that look like they may turn into something good!  I’m sure hoping so.  Still – it seems odd that this area had room for about 60 stalks of corn – and only 15 of them have been pollinated. 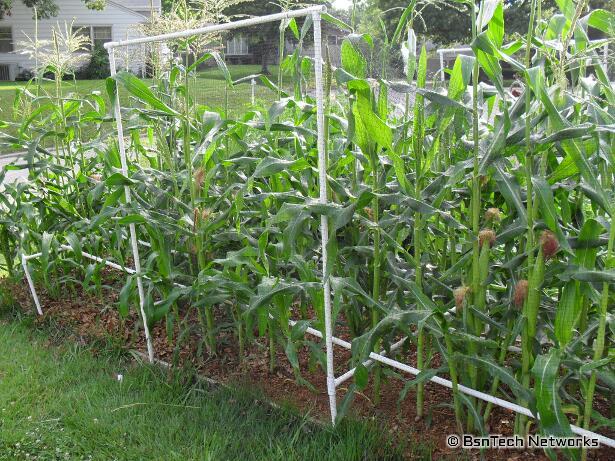 It would be nice to fill this area with more green beans once the corn is done – but many stalks of corn were put in later and still have a ways to go in order to be fully mature.  That would put green bean planting past the time where they would be productive.  That is why I planted another 50 in the flower bed this morning.  Unfortunately, the deer got to the original 50 that were in the spot because I didn’t have any extra deer netting – but now I’ve purchased another 100-foot roll of deer netting that should give me sufficient supply.

Next is the tomatoes.  I certainly hope I’ll be able to find all the tomatoes in this big cluster!  They have grown so close together that the only tomatoes I’ve seen are those around the outside.  There are tomatoes on every single plant. 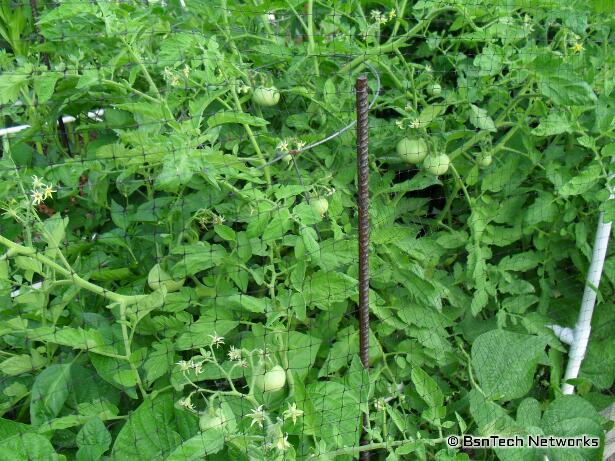 And lastly – the Copra Onions.  They have really bulbed up lately.  Many of them haven’t really provided much of a bulb at all – especially those that were planted in the cinder blocks in the back garden – but those in the back garden don’t produce well at all because the potato vines just take over the area and shade the onions out.  In reality, I just need to stop planting them back there – unless we harvest them as green onions going forward. 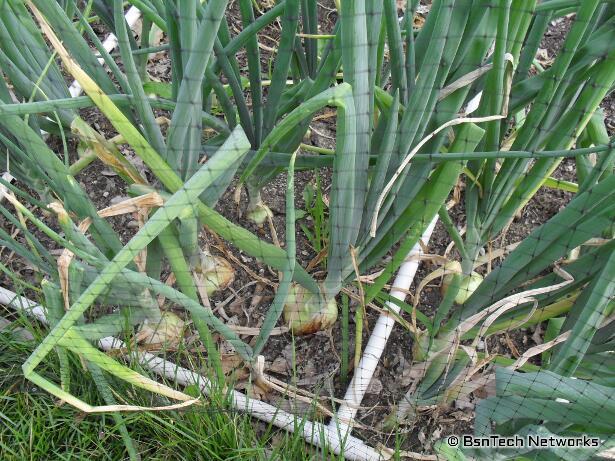 As you can see, there are some decent sized onions in there.  This is in the front yard where they get full sun all day. 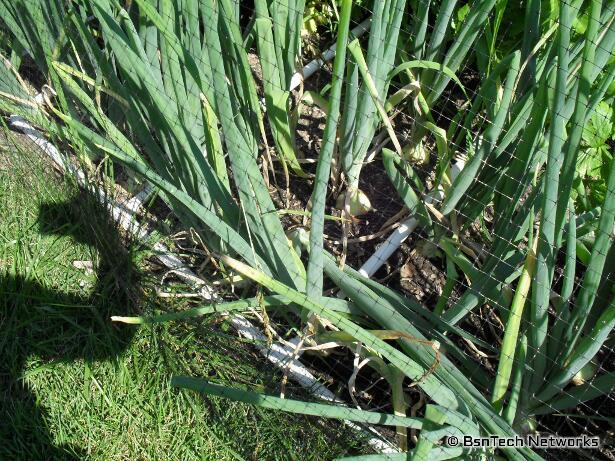 Do you see the one onion “top” lying on the ground there?  Well, what happens is this – when the onions are ready to be pulled out, right where the “leaves” attach to the bulb of the onion – the “leaves” bend over – much like in the picture above.  That signifies that the bulbing is completed.  It is really hard for me to believe that some of them are already falling over!  The summer solstice is what causes onions to begin bulbing – and that is around June 21st.  So it hasn’t even been 20 days and already, there are at least a half dozen onions that have “fell over”.

That is all for this week’s garden checkup!