The garden has now been fully planted – well, short of starting the cucumbers which I’ve not done yet!

The germination station was disassembled this week and everything is now outside.  Of course, what is going to happen now?  Well, we have a frost advisory for this evening so I hope it doesn’t cause any damage.

I took some pictures of the garden back on April 27th, but never had an opportunity to post them.  So I’ll start with those photos first.

That weekend I spent some time getting the garden put together.  The irrigation system needed to be put in the front and I also had to make a few extra 1/2-inch PVC pipes with holes every six inches for the front garden.  After drilling the holes (used a 1/16-inch drill bit), I then hooked it up to the water from the house to ensure all of the holes were free and clear.  It looks like a big sprinkler on the driveway! 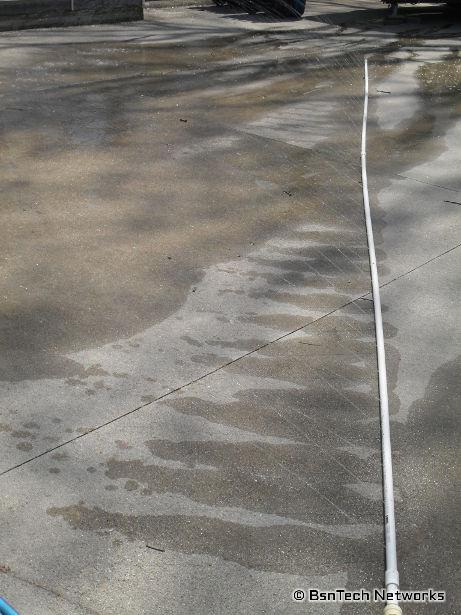 After that was done, I got the front garden put together: 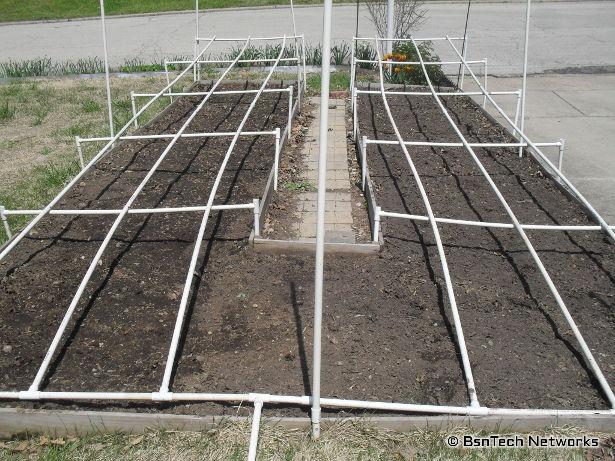 In other areas around the garden, here is the patio area (4 x 8 raised bed) with the Ventura celery planted (and mulched using dead grass from the yard) and the onions: 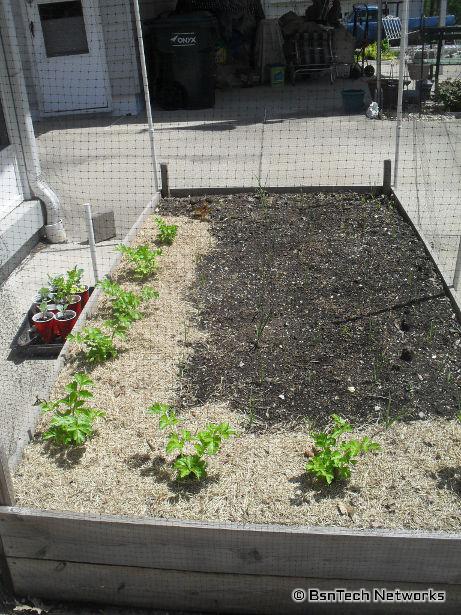 The lettuce – which made it’s home in the old carrot bed – is doing well too.  With onions planted on either side: 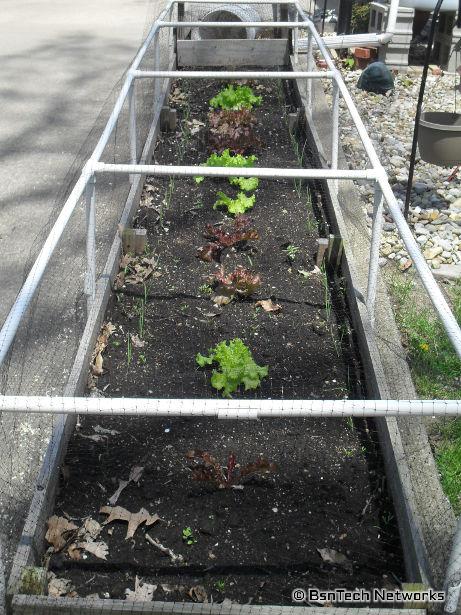 The back garden looks pretty bare, not too much happening: 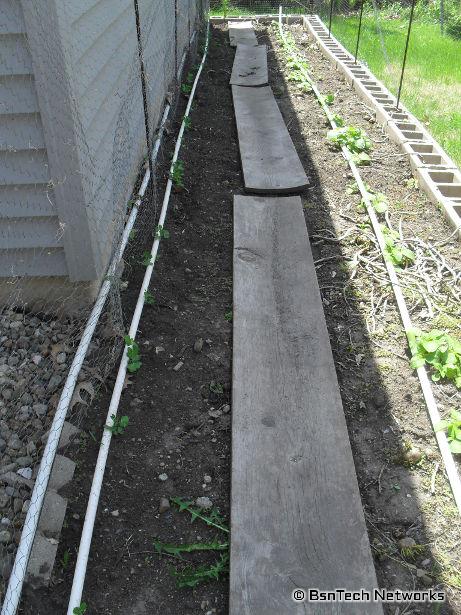 The side garden is doing well.  Broccoli, peas, and potatoes are showing some life: 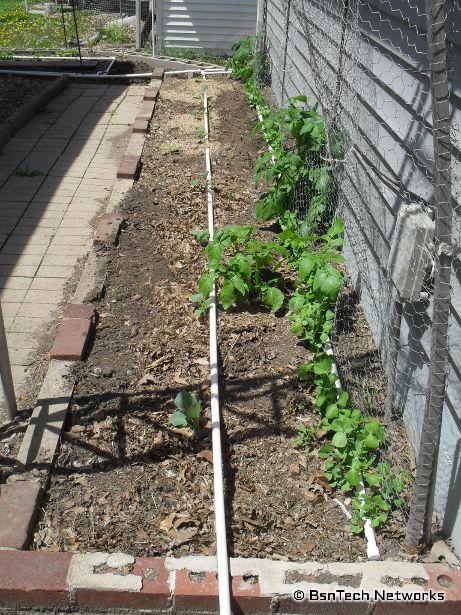 Radishes – they are using the spot where the strawberries once were in the pyramids.  I’ve been planting a little bit about every two weeks to have a rolling supply: 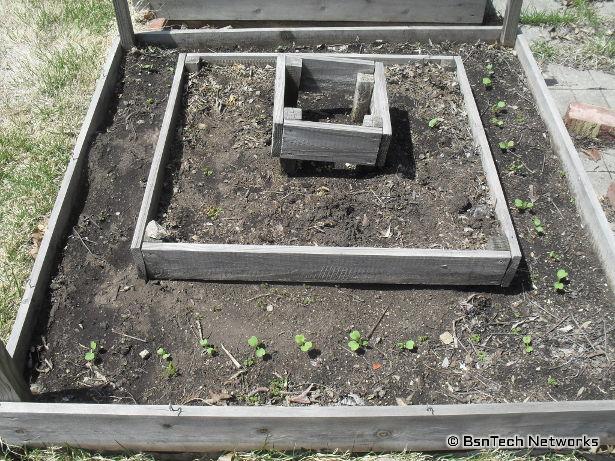 And finally – the potatoes that are in the “flower” bed beside the road (which has basically been claimed for growing potatoes): 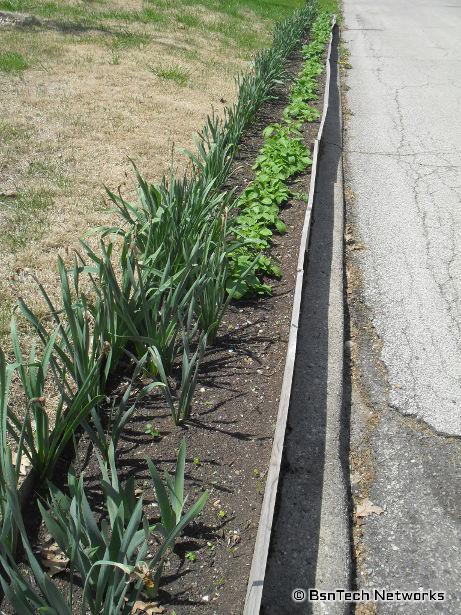 So that takes care of the photos from April 27th.  The photos from today – May 16th – shows remarkable improvement across all of the garden beds.  We’ve had some really warm weather during that time – in the high 80’s – which really helped to get things moving.

The front garden has had everything planted – even the green beans were planted about a week ago.  Very hard to see in the pictures below, but there are rows of green beans on either side.  The tomatoes are all in a row down the center: 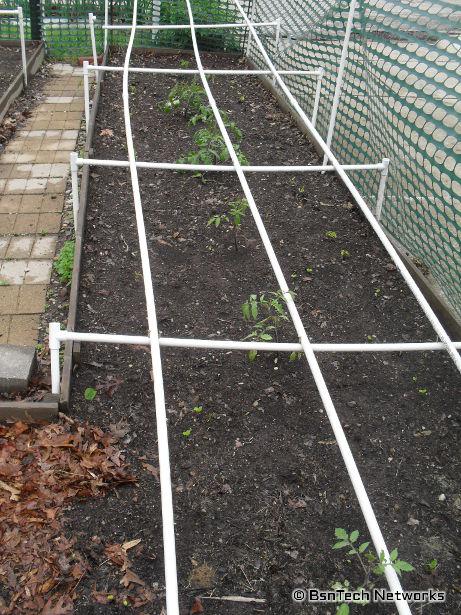 On the other side of the front garden has broccoli, cauliflower, and peppers – with the green beans flanking on both sides: 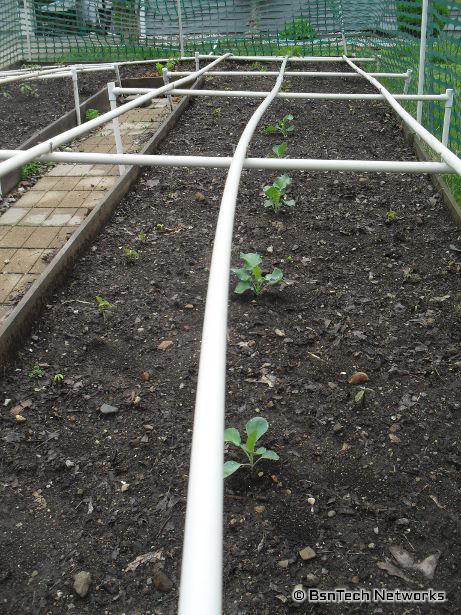 Radishes in the old strawberry pyramids are showing quite a bit of growth: 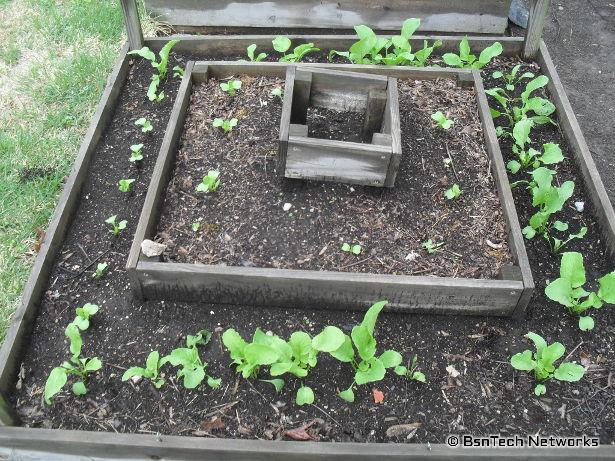 The patio garden is doing very good.  We used a little bit of lettuce this week for sandwiches as well.  The Ventura celery and onions seem like they have doubled in size: 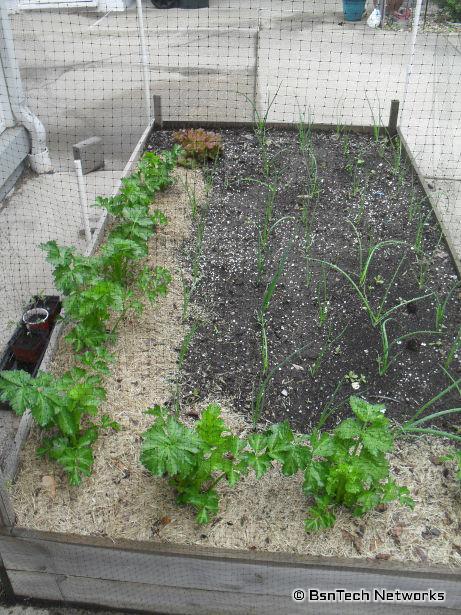 And the lettuce is ready for harvest (plucking leaves at a time to keep them growing): 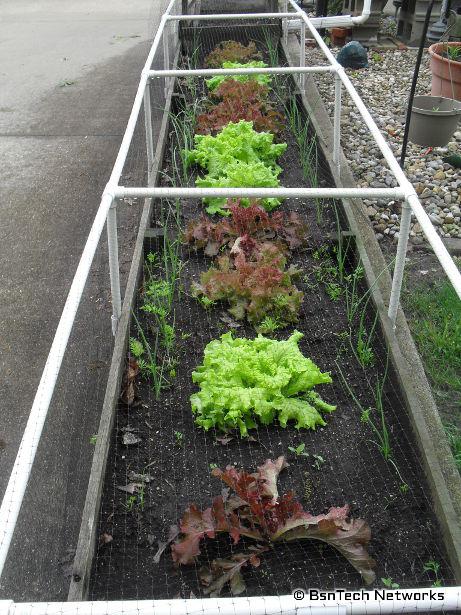 Early this morning, I got out and put the deer netting over the potatoes by the road.  In two weeks, they have considerably grown.  Late last night I mulched them with leaves that were mulched up from last year: 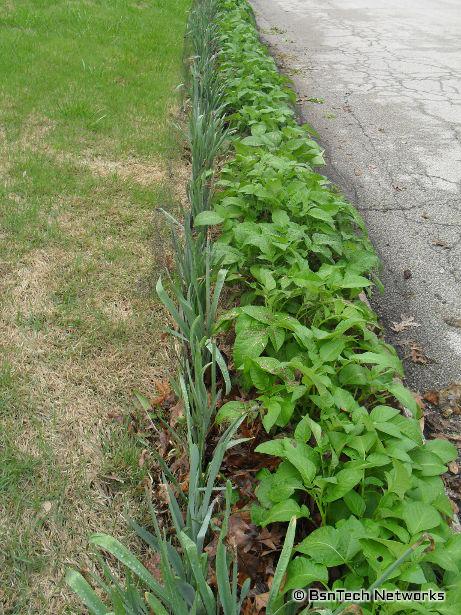 The back garden – compared to the other picture of it above – shows dramatic growth as well for both the potatoes (on the right side) and the peas (on the left): 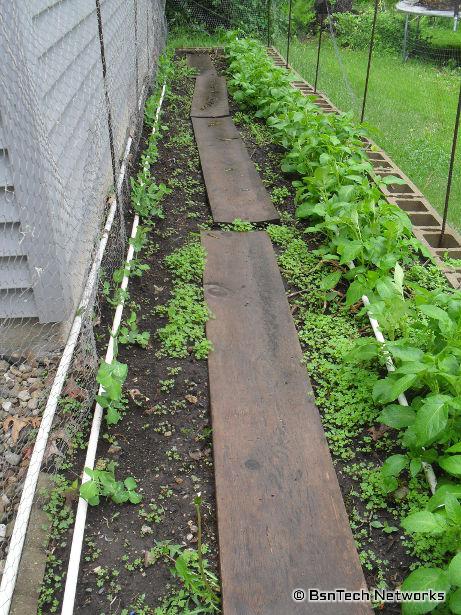 And for the side garden, same thing.  Peas doing well and the broccoli is much easier to see compared to the previous photo: 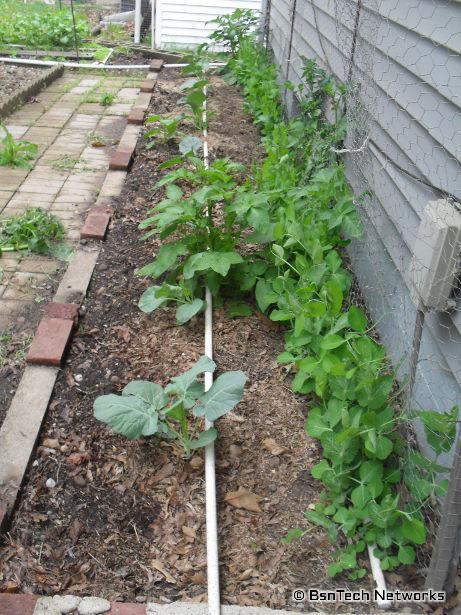 And the final picture – is a grouping of strawberry plants.  Several years ago when I got strawberry plants for the first time, I had one or two extra that I didn’t have space for in the strawberry pyramids.  So I planted them back by the patio door.  In that period of time, they have realy started to take off and take over the area.  There is an area right by the strawberries where I’ve planted watermelon before; maybe I’ll just let the strawberries take it over so we’ll have a small strawberry patch again: 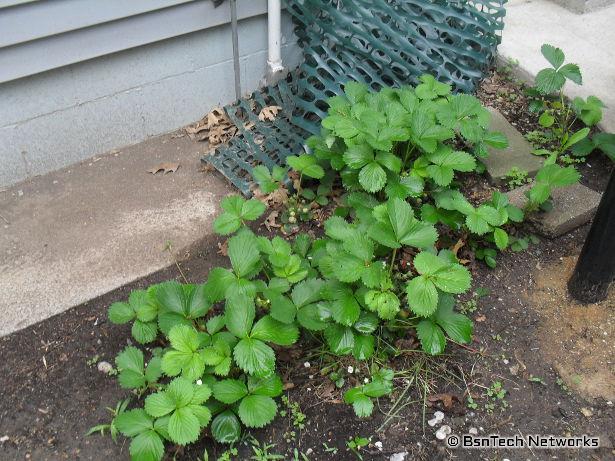 That takes care of this garden round-up!