It has been a few weeks since my last post.  Been a crazy time going on between a 9 day trip to Florida, some family activities, and another trip to Michigan for my job.

At least I got some pictures taken when I planted everything outside though!  All of the pictures below are from April 24th. 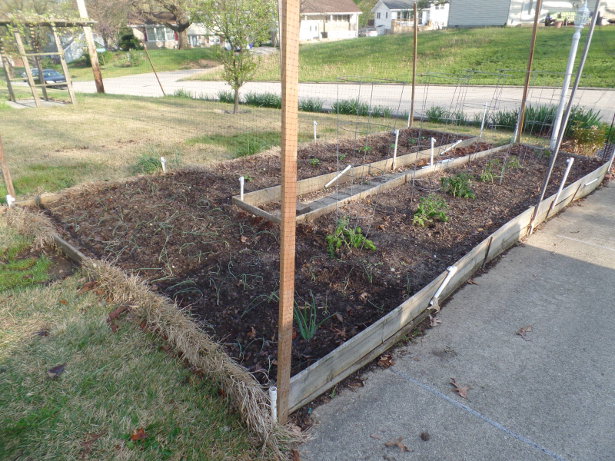 I also had to secure the garden more this year.  Last year, the deer hopped right over the four-foot snow fence that was put around the garden.  So this year, I had to resort to the deer netting again.  I had some scrap 1×2 lumber that was setup around the garden and the seven-foot high deer netting was then put around it.  You can’t even see the netting, which is nice – but those seven foot pieces of wood really stick out badly.

Next up – the onions in the front garden: 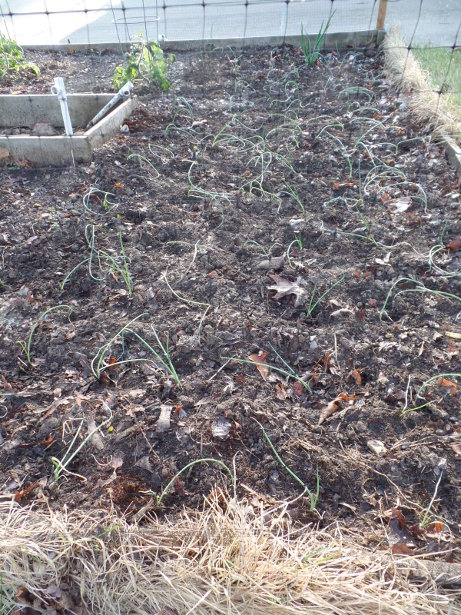 I had WAY too many onions that finally managed to sprout in the house.  So, I put five to six rows of onions in the front with about 12 – 14 each.  This area of the garden is ten feet by four feet.

The rest of the decent onion starts went into the bed on the driveway in the back.  Usually, carrots are planted here but I just couldn’t throw away good onion starts: 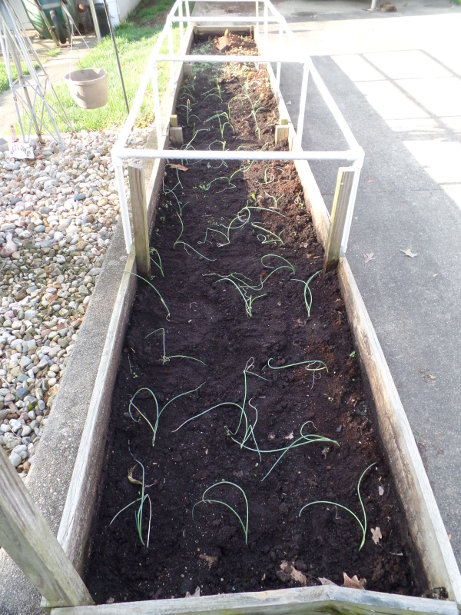 Another 42+ onions were planted here.  As long as the weather is not terribly wet like last year, I’m hoping we’ll have a really good harvest of onions.  Last year, it was pretty wet and well over half of the onions ended up rotting in the ground.  What a shame – spending all that time starting the onions and maintaining them – for over half to be unusable.

Next – the peppers in the front garden: 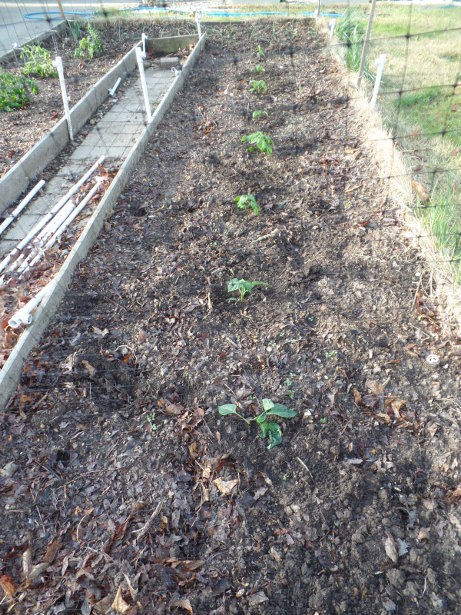 A total of eight peppers were planted down this row – right in the middle.  This section is about 16 feet long (not including the area where the onions are planted) and four feet wide.  Unfortunately when I was putting the deer netting up, the roll of deer netting fell on the first pepper right in the front – causing it to break right at the stem.  Not much hope for one of the eight pepper plants, but I left it alone to see if it will grow back.

And for the tomatoes: 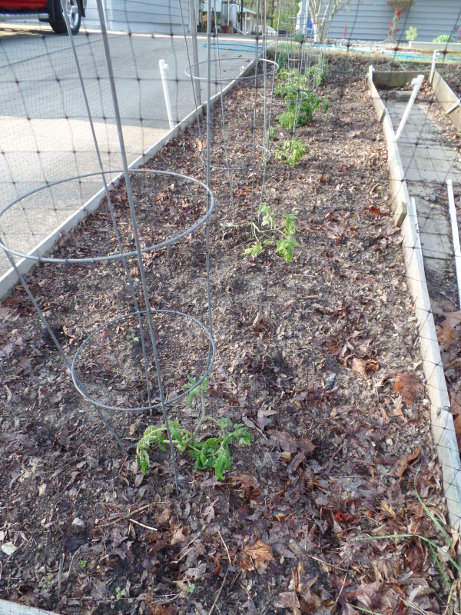 When I got back from Florida, the tomatoes were absolutely HUGE under the lights in the house.  I knew they needed to get planted outside right away.  Because so many of the seeds came up, not only are there tomatoes in the front garden, but a full row of them in the back garden as well: 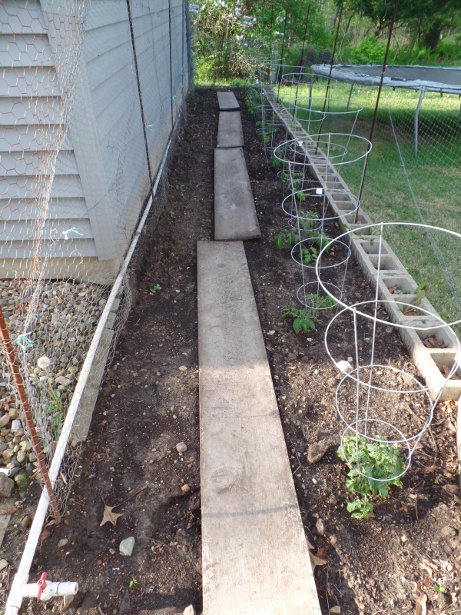 I didn’t have enough tomato cages, so I had to buy another six of them at Menards.  I have a few rebate cards from Menards from different rebates that they offered last year – when we spent some money re-doing the kitchen.  So it didn’t really cost anything out of pocket – but they were about $20 for six of them.  They had the larger, more stable tomato cages but they were almost $5 each.. wasn’t going to pay that! 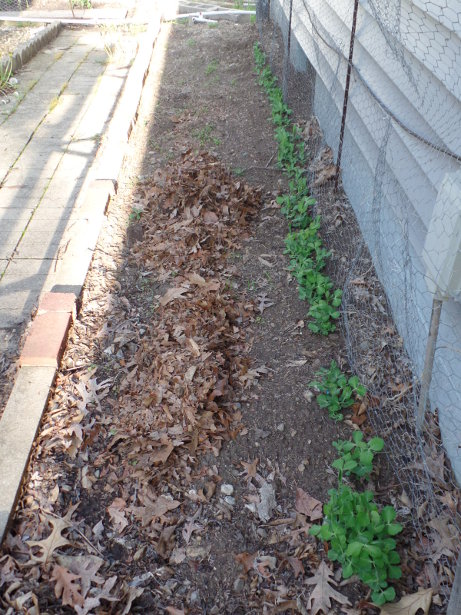 These are the Cascadia Snap Peas variety – which is a variety where you can eat the pod and all… as long as you harvest them prior to the peas inside becoming large.  Otherwise, they get bitter tasting.

I soaked all of the pea seed in water for a few hours and then planted them all outside.  Seems like it took about three weeks for them to germinate.  At least they didn’t rot in the ground though!

I wasn’t sure how well the peas would come up since the seed was about four years old.  I usually go through and put one seed every inch – but this time I just tossed them in the trench and covered them up.  The peas next to the house (gets warmth from the house) came up very well – but those along the back didn’t come up so well: 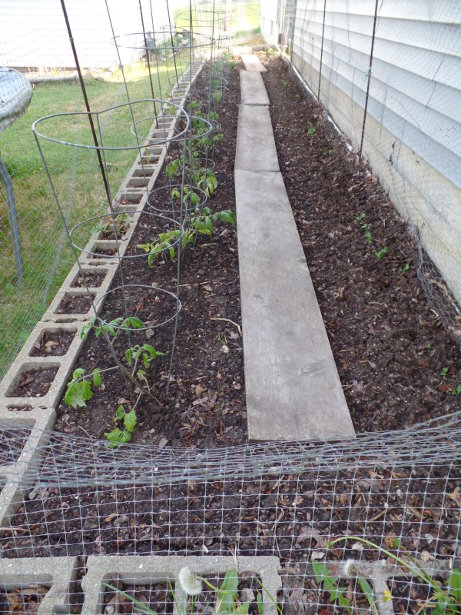 Can’t even barely see them – but they are over on the right side where you can see a few here and there. 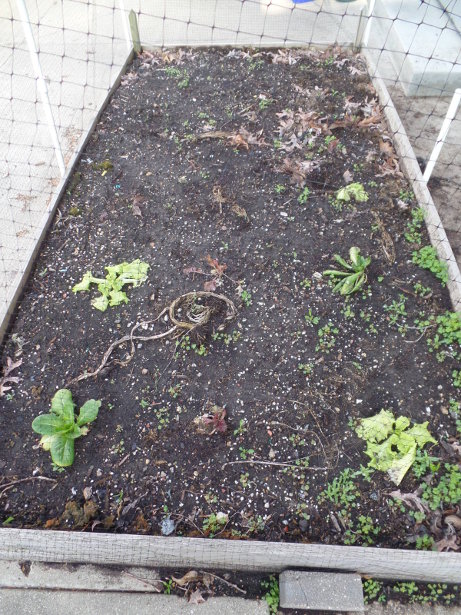 Unfortunately, when I got back from Florida, the lettuce was almost all dry and withered.  I was afraid they wouldn’t bounce back.  But, they at least have continued to grow and have come back.  While I don’t have an updated picture yet, the picture taken a week ago does show the plants are doing well.  I did have to directly seed more Red Salad Bowl and New Red Fire lettuce into the garden patch.  Of those, about six of the eight places where I planted the seeds have come up with at least one plant.  We definitely like our lettuce and have salads on a regular basis.  So one thing we really look forward to is garden-fresh salad.  Unfortunately we only get about six weeks of salad before it turns bitter and is no good. 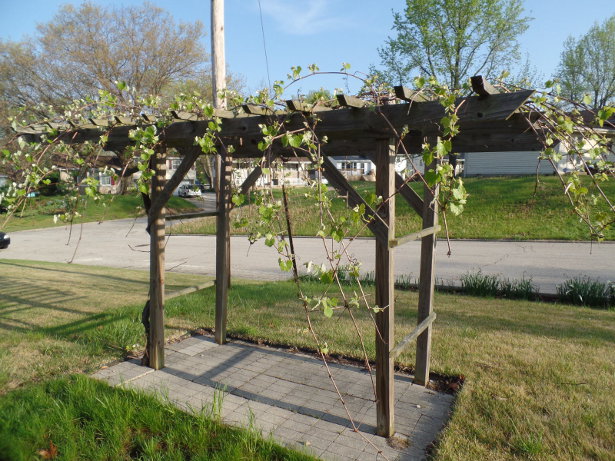 Last year, we believe an animal got in and cut one of the grape vines.  So, we only have one left.  Luckily the one that is left is the one that has pretty well taken over the entire arbor.  I didn’t cut back the grape vine this year so it is really growing everywhere.  I think that will present a challenge this year with the vines going well over the arbor. 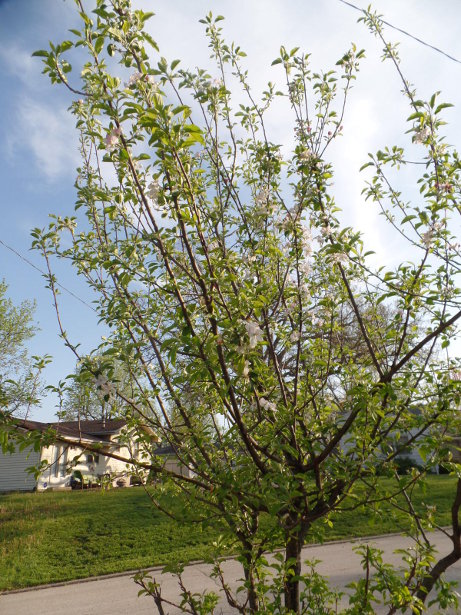 I missed taking the picture of the tree when it was in full bloom – and it is very hard to see some of the flowers even from this angle.  The deer also love our tree.  The bottom four feet of it is severely stunted from the deer constantly eating away at the branches and leaves.  But, the tree has really put some tall shoots upwards to help combat that.  The tree does look a bit bad though with the branches everywhere… needs a bit of a trim.  But I’m afraid of trimming it up because of the deer.

And finally, the old rain barrels: 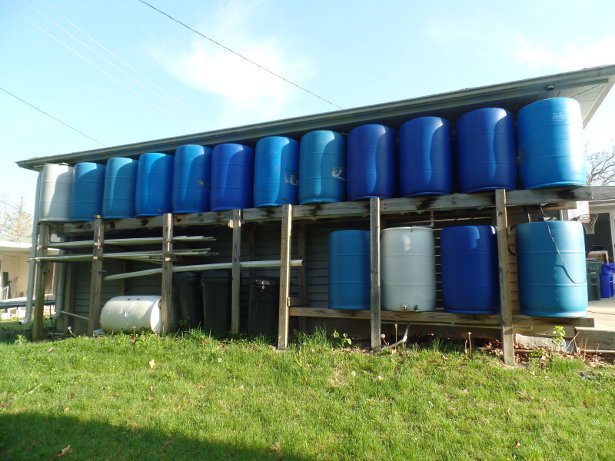 The rain barrels were put into commission.  After several years, the structure is still holding strong and the barrels have continued to provide us a great wealth of rainwater caught from the roof of our garage and house.  It certainly is messy behind the garage with an old compost roller that I tried to use once (which wasn’t worth the effort) and some other trash barrels that I’ve kept leaves and twigs in.

Welp, that takes care of the garden update for this round!