Several months ago I began work on a retaining wall for the garden that is behind the garage.  There is a nasty slope back there that has caused me to slip several times while picking tomatoes and other veggies.  By putting in the retaining wall, I will then be able to fill in the area and make it level – and will have the added benefit of picking up an extra 2 x 27 foot gardening area for more produce!  I'll have to put a board down the middle of the garden so I'll have an area to walk on, however.

I looked at several options for making a retaining wall.  The first was looking at the typical retaining wall bricks.  But, those suckers are about $1 each and they are only about 4 inches tall by 6 to 8 inches long.  At that rate, it would have cost a small fortune to build the retaining wall – and I wasn't going to pay that!

The next option was making the wall out of the landscape timbers.  Those are also four inches tall and can be purchased at eight-foot long lengths for about $4.  I would have needed 16 of these – plus some rebar to put down the middle of them in order to hold them together.  This was more like it – and was going to cost right about $100 for all of the materials.

However, the landscape timbers left a bad taste in my mouth.  My dad used the same timbers for making a retaining wall around the walk-out basement at their house, and he just had to replace some this year due to – rot.  Granted, those timbers were probably 16 years old, but I would like to have something a bit more permanent.

Alas, I discovered the solution – typical foundation blocks for making a retaining wall!  The foundation blocks are 8 inches wide, 8 inches deep, and 16 inches long.  What I also like about the blocks is that they have two squares cut out in the middle.  I can use this space to plant one (maybe even two) onions in each of these!  The retaining wall blocks have been averaging between 99 cents each (they are on sale now and I've purchased about half of them from the sale) up to $1.25 each.  In addition, rebar is also needed as well.  I plan to use the rebar for two purposes – for ensuring the foundation blocks are secure and to use them as fence posts for the green plastic fencing I put around this garden.  This will then eliminate the need for using the 1×2 wooden strips I've been using as fence posts that rot out every year.

Below is a few pictures showing the progress so far.  Yesterday it was very nice outside and I put up about 2/3 of the below progress that day. 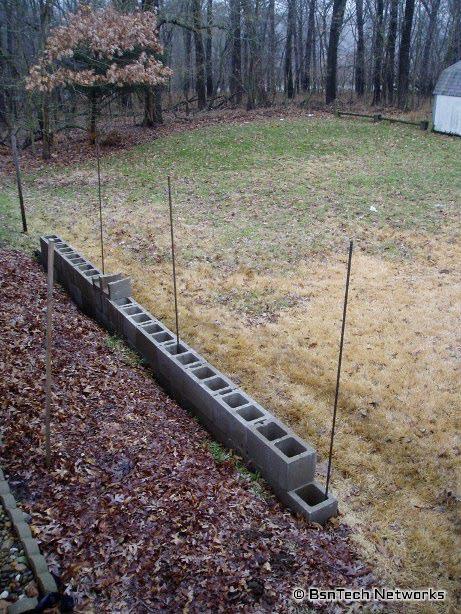 One thing I am going to change is to pull out the rebar I've put in (will put in six of them about 5.5 feet apart) is that I will put the rebar on the outside of the bricks.  I'm going to have to get a lot more rebar and cut it into 3-foot length sections.  Then I am going to have to put one piece of rebar in front of each little square (will be about 40 – 45 total) and drive them in the ground two feet.  This will keep the foundation block retaining wall in place.  I thought about adding concrete down every other square, but this would take away from the garden space – and it would make this a very permanent retaining wall.  I do want to have the possibility of other homeowners that may buy the house in the future to take this out if they wish.  So, by using rebar driven into the ground in front of each square, this will allow all the blocks to be removable. 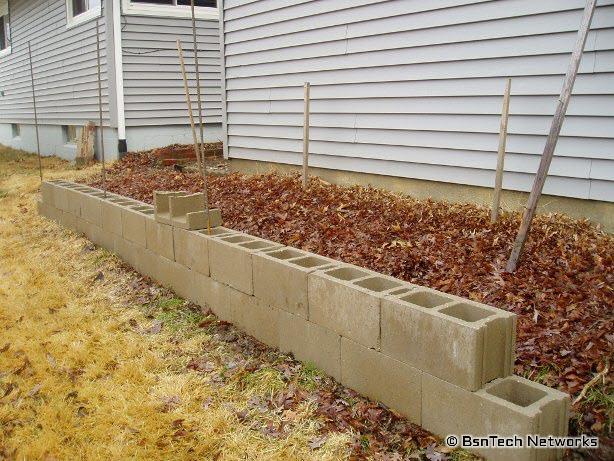 Total cost of this project will even be just about the same cost as the landscape timbers – and may be a few dollars cheaper.