We finally got a reprieve from the summer temperatures this week!  Last week, it was in the 90’s almost every day.  At the beginning of the week, a cold front came through and we had some days where it only hit about 70 degrees.  But, it was definitely well received – for me at least.

Unfortunately because of the hot weather, it has caused the Cascadia peas to stop production.  I’m not sure if they will start producing again, but there are not any other flowers on the peas. 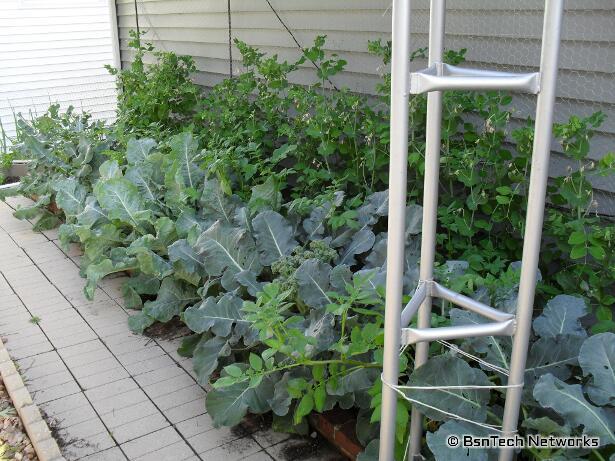 One thing that continues to grow is the lettuce.  We absolutely have more than we can use.  I’ve given three gallon-sized bags to the neighbor and one to my parents.  We made a “7 layer salad” the other day with quite a lot of the salad – but we still have two full bags of lettuce in the fridge from a week ago now.  Certainly shouldn’t complain since last year we may have had one week worth of lettuce – and we’ve had at least four or five weeks of lettuce so far. 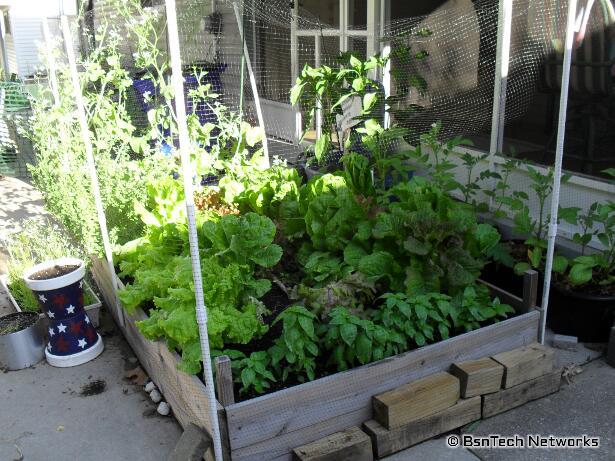 The basil in the front of the patio garden is coming along well.  It is a good thing too – because we are almost out of basil from last year!

Way in the back – the sunlight is drowning it out, but I have several Easter Egg radishes that are going to seed – and so they have flower stalks that are about four feet tall!

One thing doing well is the cauliflower and broccoli!  However, I’ve learned from my mistake and will not place them so close next year.  Watching a show online, they said that Green Goliath broccoli could be placed a foot apart.  They certainly can grow, but the heads of broccoli and cauliflower are much smaller.  Here is a picture of two heads of cauliflower that were taken from the side garden where they were spaced 12 inches apart.  The cauliflower in the front is one taken from the flower bed where they were spaced at least two feet apart – and it is about twice as large. 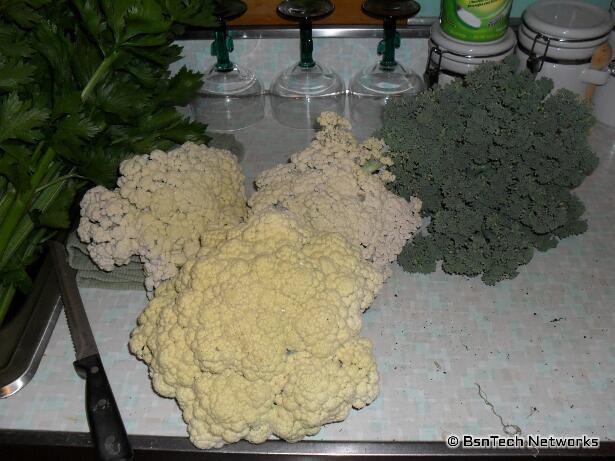 In the back garden, none of the cucumber plants have managed to show their faces yet – but the potato plants have absolutely taken over. 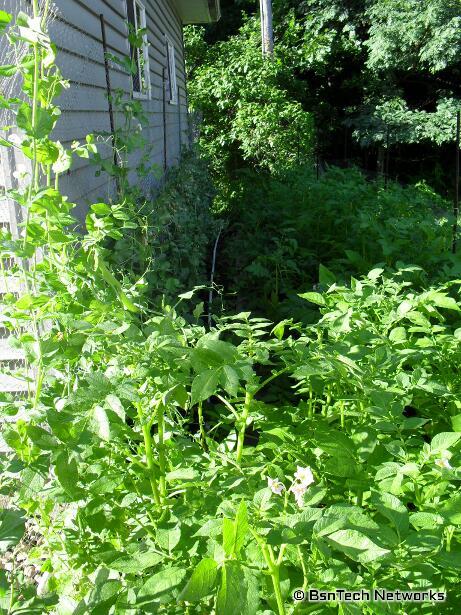 The watermelon are growing well too.  The area has green beans around the area with three Crimson Sweet watermelon in the middle. 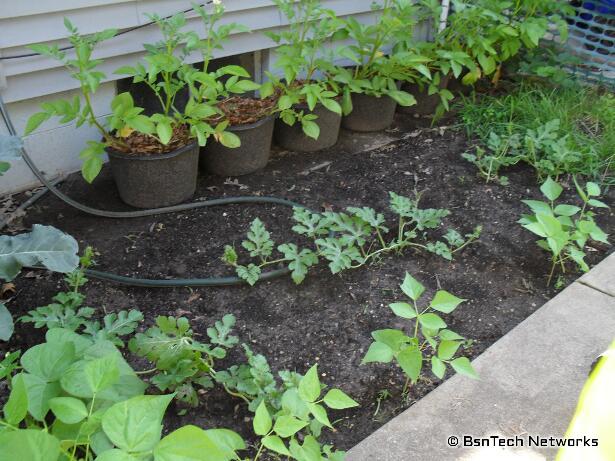 Over on the driveway, the carrots are doing well and the potato bin is growing good too.  The Sugarsnax carrots are definitely further along than the Scarlet Nantes. 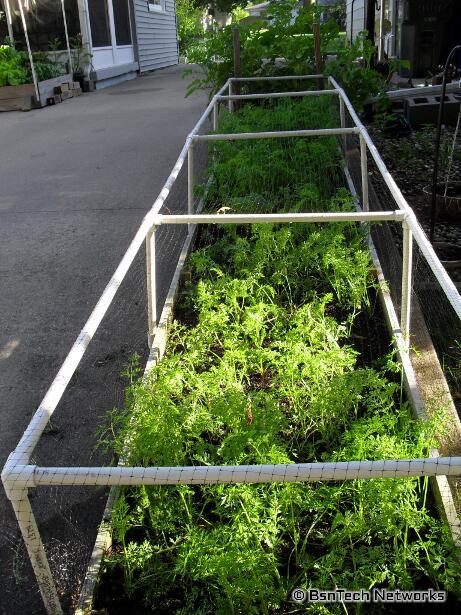 Moving to the front yard – here is the flower bed garden.  This shows one broccoli and one cauliflower along with onions in the back.  The cauliflower seen here was just pulled yesterday. 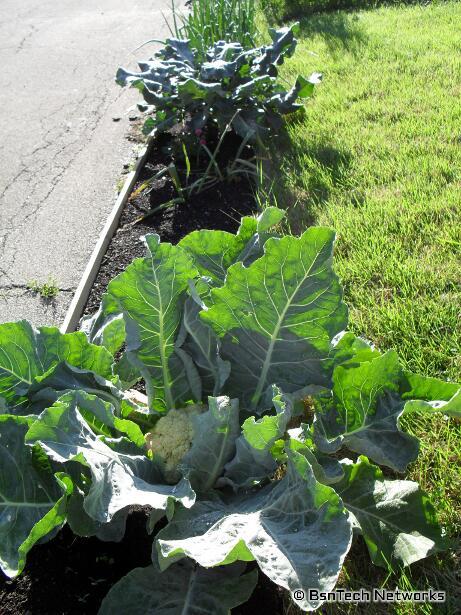 And the front garden with a lot of celery and onions.  The onions are starting to bulb now – so I can’t wait to see how large they will get this year.  Only about half of the celery has been cut thus far. 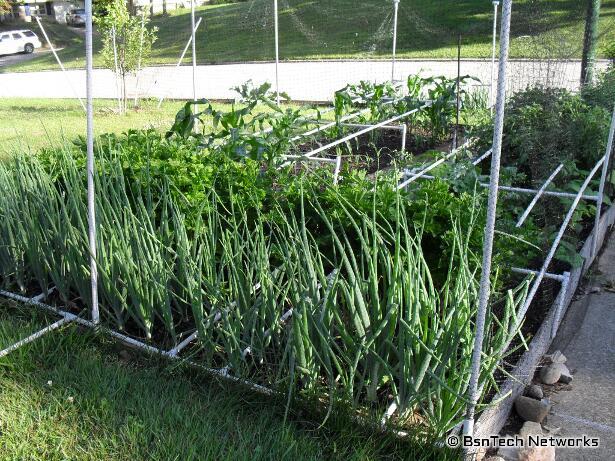 The tomatoes are growing very well along with the Honey Treat corn. 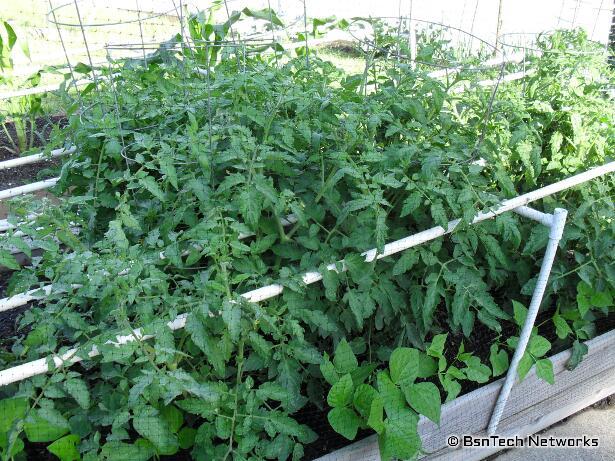 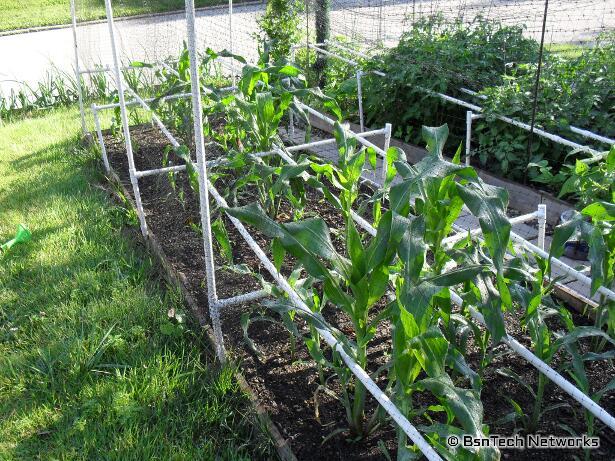 So, that takes care of the garden pictures for this week.  Hopefully the corn will get going a bit faster – because it seems very slow this year.