Time for a full garden update!

Let's start off with the front garden.  The front garden has been growing very well.  Two additional rows of greens beans were planted towards the center about three weeks ago and they are coming right along.  In addition, there is a row of corn right down the center (hard to see because the green beans are overtaking them!).  You'll also notice the addition of the bird netting has been used as fencing around the full area now.  The netting stands about five feet tall to keep the deer from getting into the corn and everything else.  The peppers just needed more head space to grow and with the corn growing, it was a matter of time before it had to be done. 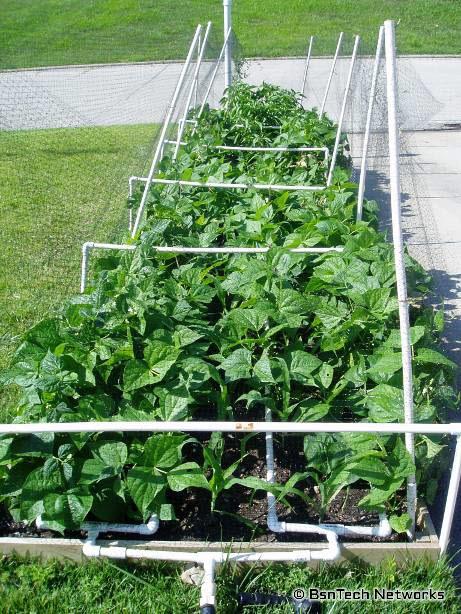 Here is a closer look at one of the pepper plants.  There are about a half dozen peppers on each of the eight plants right now – and as they grow taller, they are putting on more flowers for more peppers! 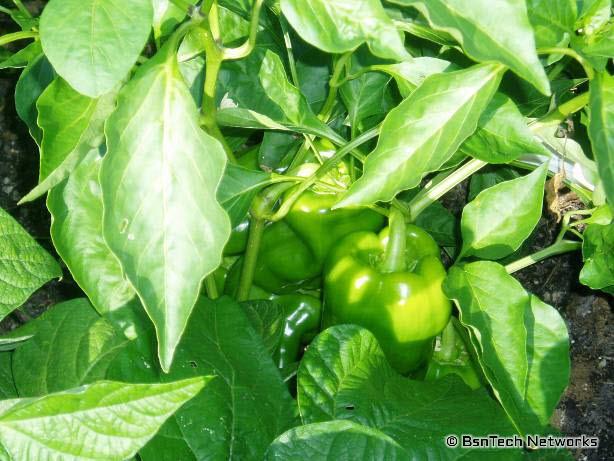 Now let's go over to the grape arbor.  The Concord Seedless is doing very well and is growing along the top of the arbor already (not pictured).  The Flame Bunch grape has turned into a huge plant!  While the Concord Seedless only has one main trunk going towards the top, the Flame Bunch has several different branches that had to be tied together! 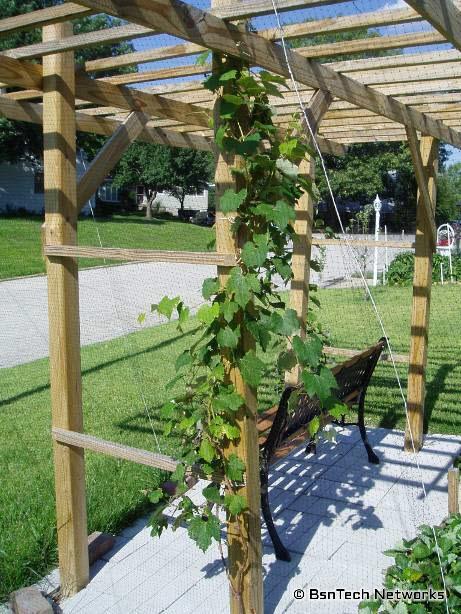 Now to the driveway where there are two raised beds.  The first one is where the carrots were planted.  They are coming in well, but they are quite slow growing. 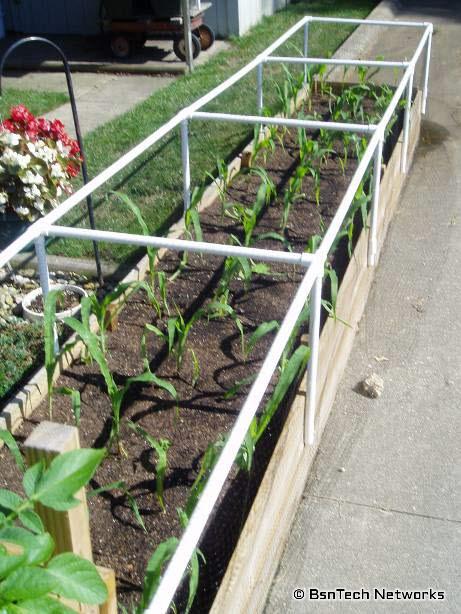 And here are the green beans in the newly created raised bed.  This bed is already full of green beans!  The plants were all taken from the area where the corn is planted in the picture above.  Green beans were originally planted here and then transplanted.  As above, there are still a few green bean plants that haven't been moved. 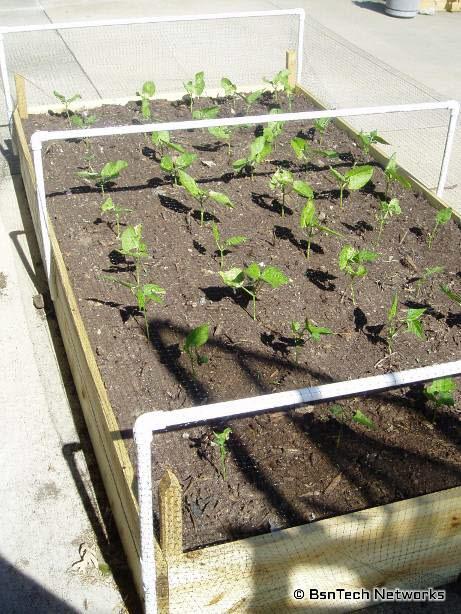 Along the side garden by the house, the corn is doing very nicely.  They were planted alongside the house and in any containers I could find. 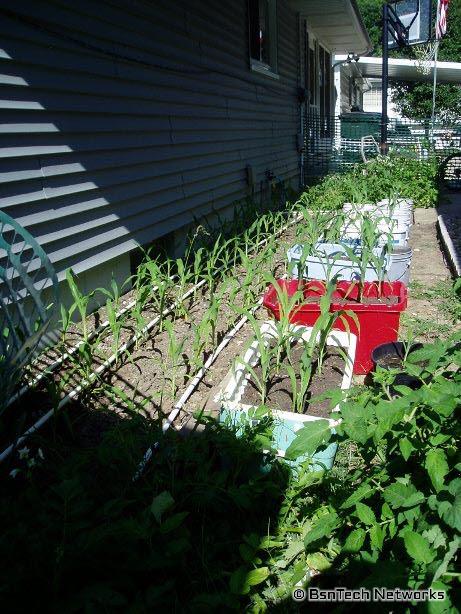 How about the cucumbers!  The two cucumber plants have begun to grow together since they are running out of space on the chicken wire fencing.  I finally spotted a few small cucumbers that are growing!  I thought that every flower put on a cucumber, but I've found this isn't the case.  There are maybe two dozen flowers on each of the two plants, but only one or two cucumbers on each. 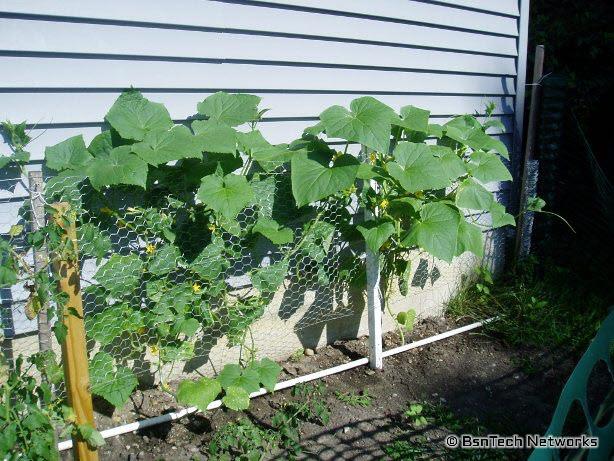 And for the Roma tomatoes – the two plants are loaded with the little tomatoes!  They are beginning to ripen up so we'll have a bunch of them. 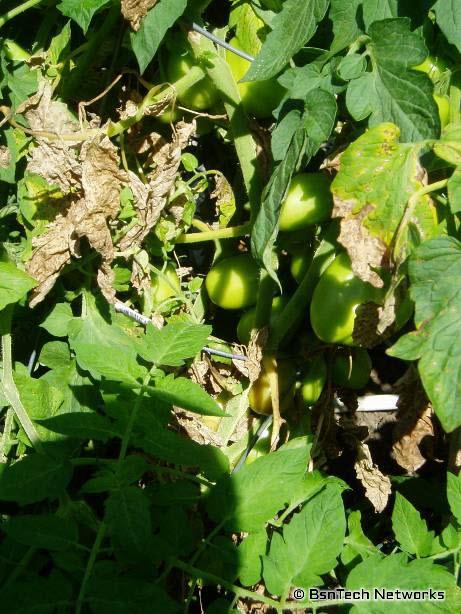 Now, for the ugly.  Some kind of fusarium wilt or verticillium wilt have taken over the Best Boy and Red Cherry tomato plants.  The Best Boy tomatoes have a good amount of large tomatoes on them though – so we at least are going to get something from them: 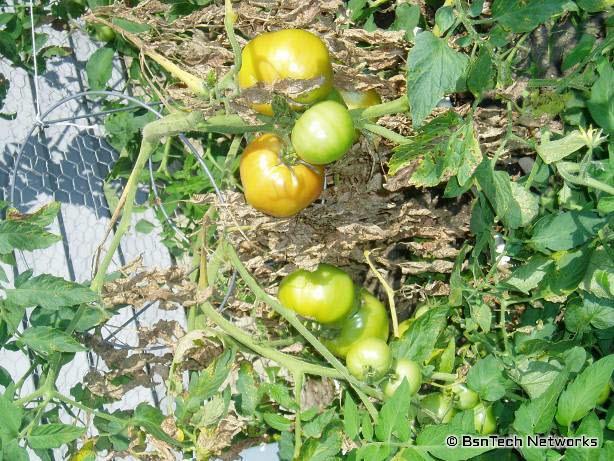 Unfotunately, the Red Cherry tomatoes are a castrophe.  One of them is still trying to survive, but this one has completely had it: 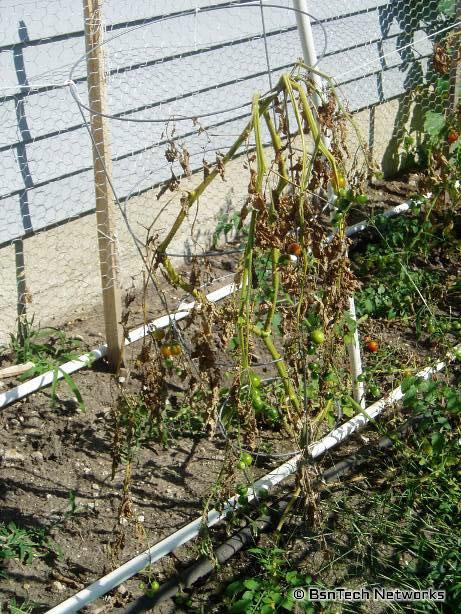 A pretty sore sight and disappointing.  But, considering how much the gardens have grown this year, that is one very small thing compared to last year.  Last year we just had tomatoes and corn; this year saw a multitude of other veggies added to the garden and they have all yielded exceptionally well.

So far everything is looking great!  I just hope that the weather this year holds out a bit so the corn has time to fully mature.  If it frosts anytime before October 15-20, all the corn very well may be ruined.