Time for another full garden update with pictures. 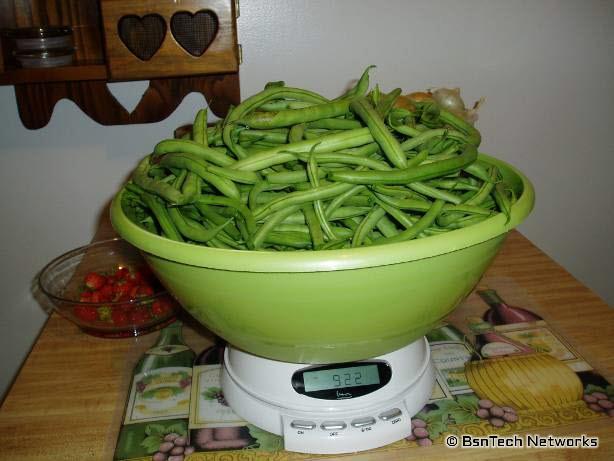 The beans we planted were the Bush Blue Lake 274 and Bush Blue Lake 47.  One of them (can't remember which now but it is in my paper logs) had a much better germination rate than the other – so I'll ensure to only buy those next year.

The front garden is busting at the seams!  The green beans are really taking over and growing well, and the Sugar Dots corn down the middle is just keeping ahead of the growth of the green beans. 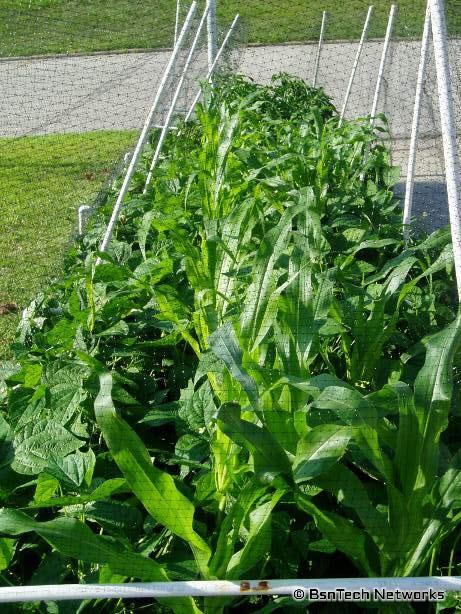 The California Wonder pepper plants at the end of this garden have a large amount of peppers on them!  So far we've picked about 17 peppers from these eight plants and they keep producing. 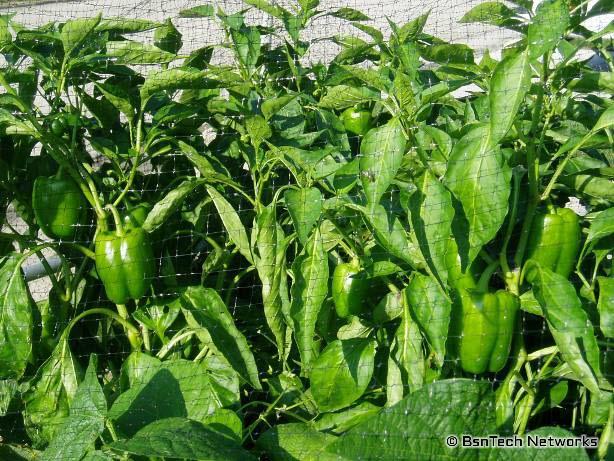 Meanwhile, the newest batch of green beans planted in the new raised bed are doing well.  They don't seem to stand well on their own, however.  Whenever I water them (since we haven't had rain in several days now), many of them fall over – but they seem to perk back up overnight. 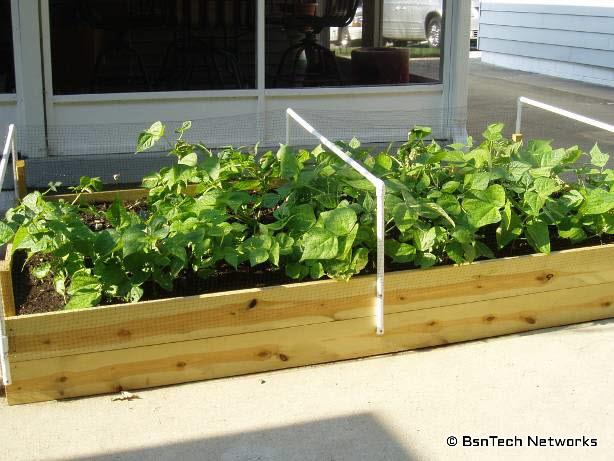 The Sugar Dots corn alongside the driveway are still coming along, but they are not doing all that well since they appear to only get between three and three and a half hours of sunlight a day.  The sun is getting lower in the sky day by day, and it isn't making it over one of the huge trees in the woods behind the house.  Then it starts to set over the garage on the other side of the driveway which shades them back out.

As for the potato bin – that one potato plant is still growing and is drooping over the side of the container. 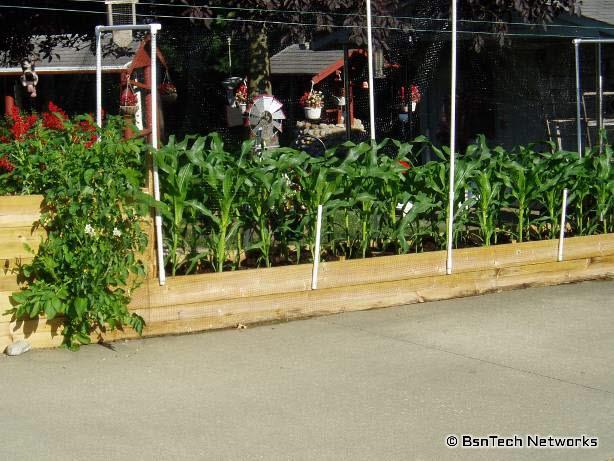 The Kennebec potatoes planted in this area of the garden are doing very well and continue to put more stems out. 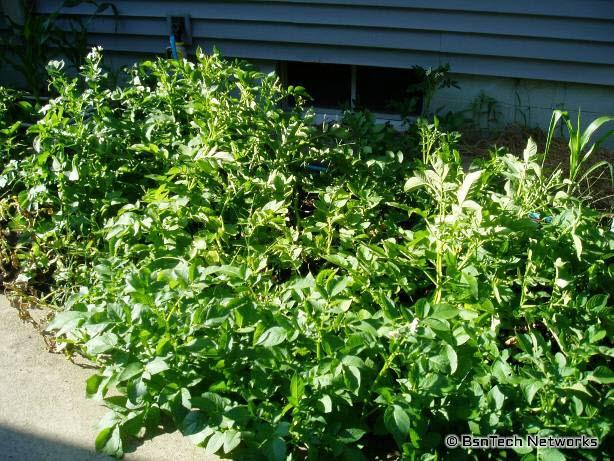 The corn against the house and in various containers is doing spectactular!  They've grown very tall already.  They are at least two feet tall at this point.  There is a combination of Sugar Dots corn and Peaches  & Cream corn in the containers, and in the bed to the right side is all Peaches & Cream corn. 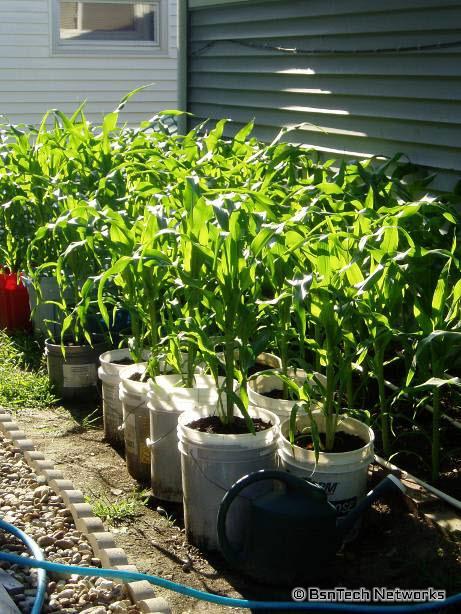 About a week and a half ago I planted 21 new seedlings of Black Simpson Elite lettuce to get ready for a fall crop.  Out of those 21, 19 have sprouted and so far they are doing well.  The weather over the weekend went up to about 90 – 92 degrees so I had to bring them inside on those days.  But, for the past two days, the weather has been mid-to-upper 80's.  I didn't expect so many lettuce to sprout as I was wanting about 12 plants.  Last time we had 12 (although one died after the first picking of lettuce) and we still gave quite a bit of lettuce to our neighbor. 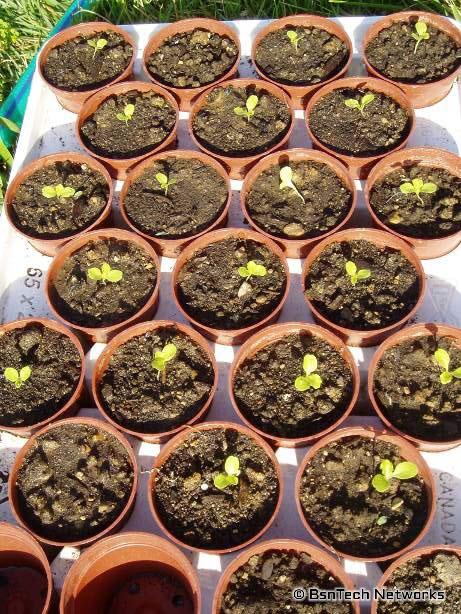 Meanwhile, in the backyard, the cucumbers keep growing and there must be at least a dozen cucumbers on the Burpee Pickler and Marketmore 76 vines (one of each).  I was a bit surprisedwith the Burpee Pickler cucumbers because they are quite a bit larger than I expected.  While they aren't as large as the Marketmore76, they still are a good six or so inches long and the diamater is at least half that of the Marketmore 76.  When I purchased those seeds, I expected they would have been small cucumbers like what you find in non-cut pickles. 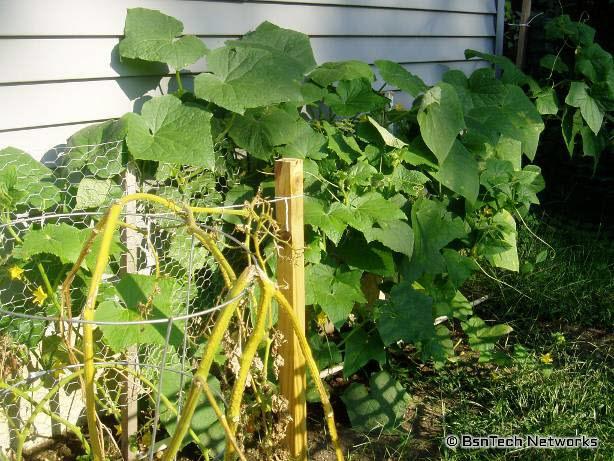 You can see in the front of the picture – the sad Red Cherry Tomato plant.  The other plant was pulled a few weeks back as it was fully dead, and this one is on it's way.  We have pulled maybe a pound of cherry tomatoes from this plant so far (pictures below). 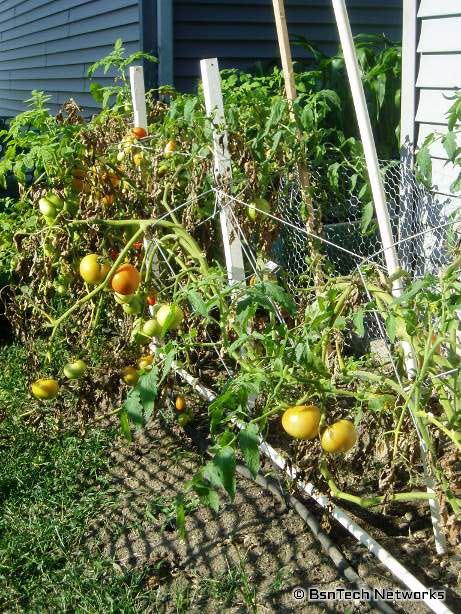 There were a total of 21 Roma tomatoes on the scale: 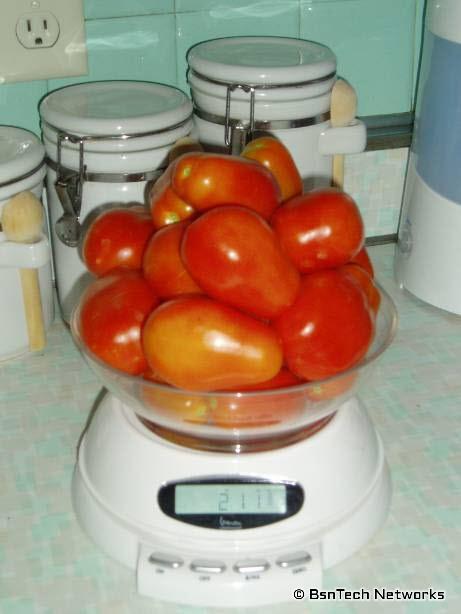 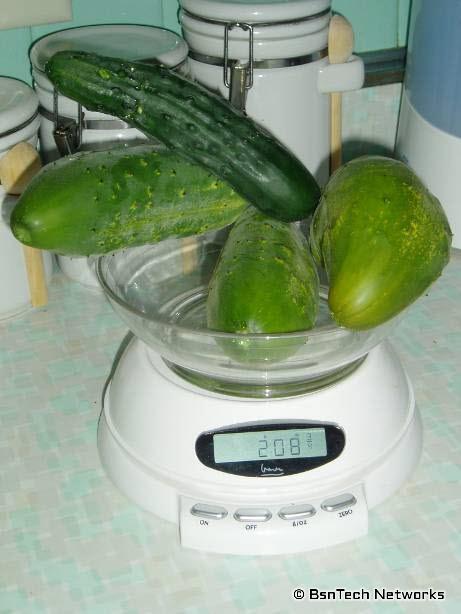 And then a combination photo of the tomatoes and the cucumbers to end the post.