Here is the garden update, as promised, for May 22, 2009.  Things have really grown since the last full set of pictures. 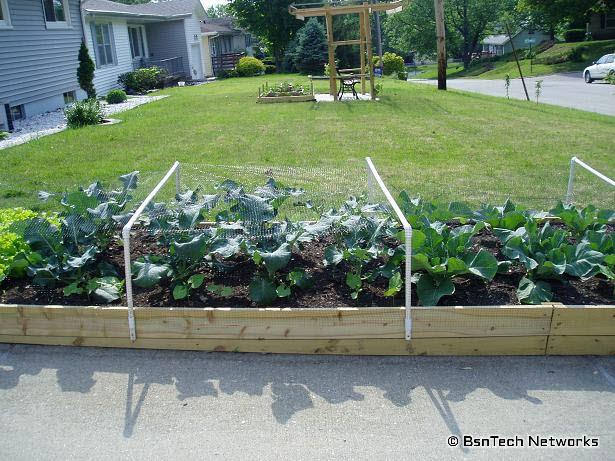 Picture of the front garden.  You can see the lettuce to the very left followed by the broccoli and cauliflower.  Not pictured are the peppers.  In the back, you can see the grape arbor and the two strawberry pyramids on the left in the background. 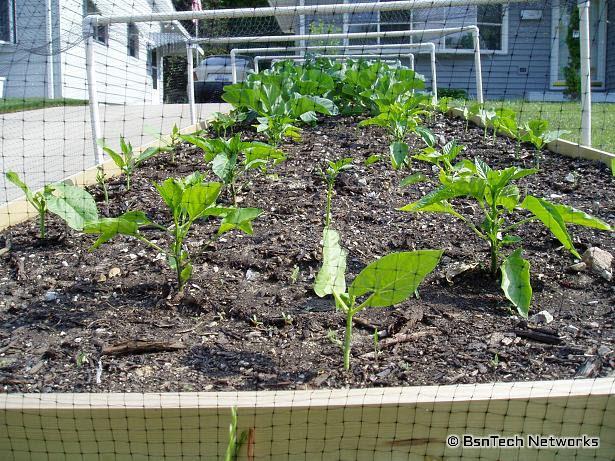 A picture of the front garden from the side where the peppers are.  Along the very two sides (and right in front) are the bush blue lake 274 beans.  I'm not too happy with the number of germinations with these.  Out of 84, about 52 came up. 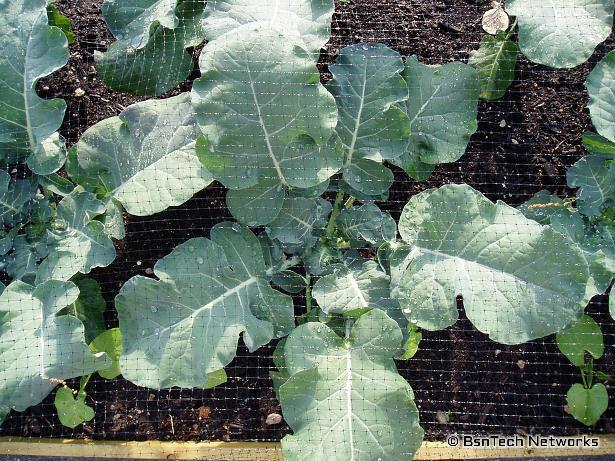 Top view of one of the broccoli plants.  They are doing very well! 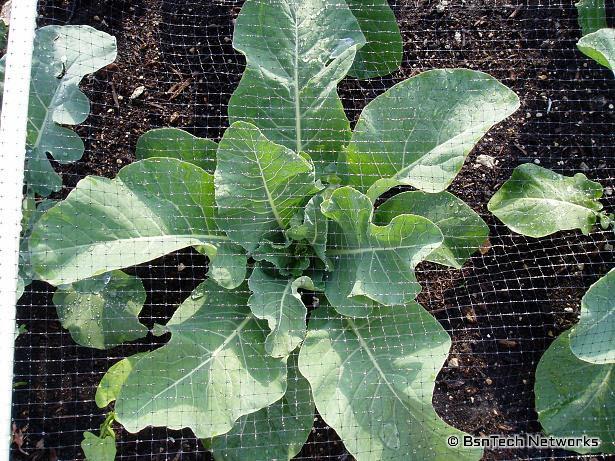 Top picture of one of the cauliflower plants. 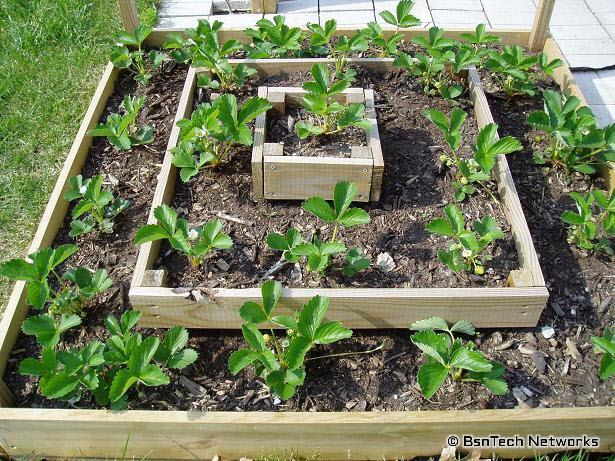 Picture of one of the strawberry pyramids.  The strawberries are growing very well and many have already lost their flowers and producing strawberries!  You can see – ever so closely in the second box on the very right, there is a little strawberry growing!  Right in the front you can see one of the tri-star strawberry plants putting out a runner off to the right. 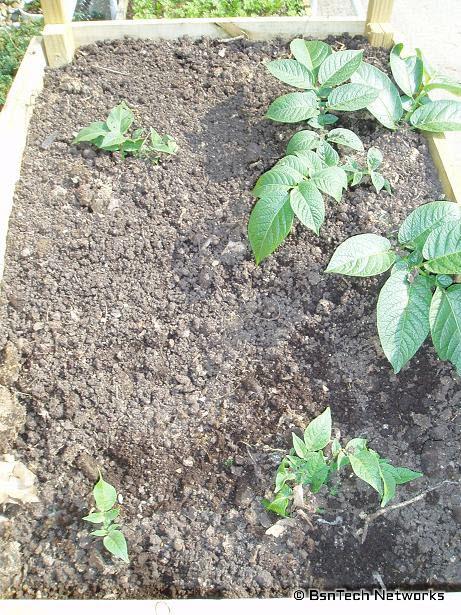 A picture of the potato bin.  I have added the rest of the boards to the bin.  The two front-most potatoes are still way behind the two back ones.  Although you can't see it in this picture, the soil is sloped downward towards the smaller potatoes.  Thank you to Sinfonian for assisting me with some questions.  He says that you do need to bury the full stem and leaves in order for the potatoes to be made all the way up.  Unfortunately, I didn't do this until recently so I still hope that this experiment is a success. 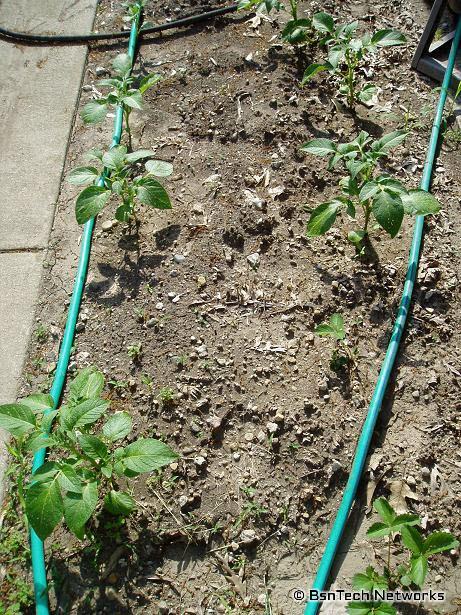 Potatoes growing by themselves in the garden.  The bottom right plant is not a potato – but is an extra strawberry plant I put here since there wasn't any room in the strawberry pyramid. 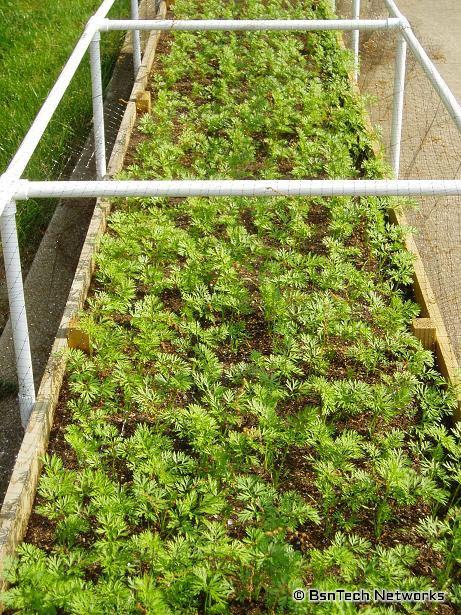 Oh my how the carrots have grown!  They are getting to be pretty bushy and growing very well.  Unfortunately, with any kind of rain or water, they all bend over and it takes overnight to get them back up.  I guess the water must be like alcohol and they all fall over! 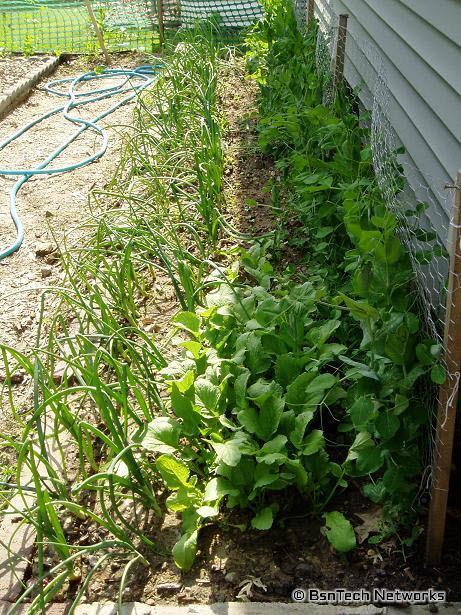 The side garden with a combination of onions down the left side, radishes in the middle, and the peas on the left side.  The peas have at least tripled in size in the past few weeks!  A few more days and the first batch of radishes should be ready for picking as well. 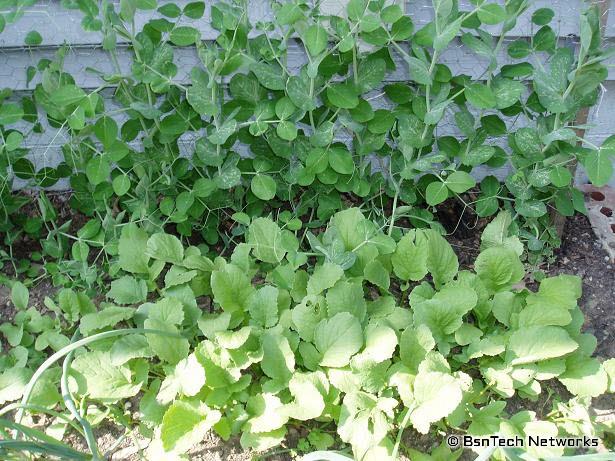 A closer look at the peas and radishes.  The peas are being held up by chicken wire fencing.  They definitely needed to be trained to grasp the fence when they were young – because I didn't put the fence all the way at ground level, but about six inches higher.  I chose to do this because the chicken wire fencing is only 24 inches tall (two feet) and the peas can grow to three feet. 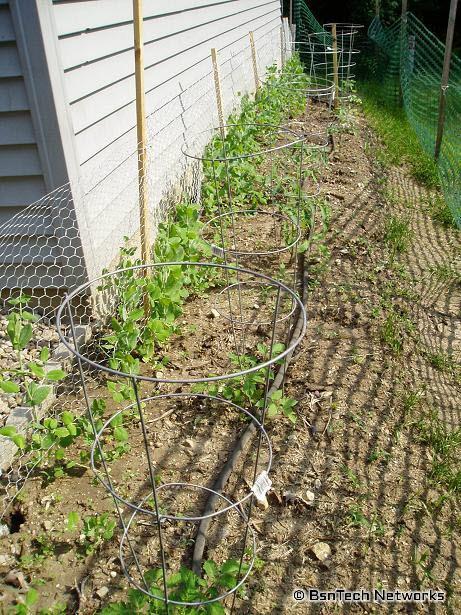 The back garden with the three varieties of tomato (best boy, roma, and red cherry tomato).  Peas on the left side along the chicken wire fence.  These peas aren't doing as well as the ones against the house, but they also sprouted a whole week later – if not later. 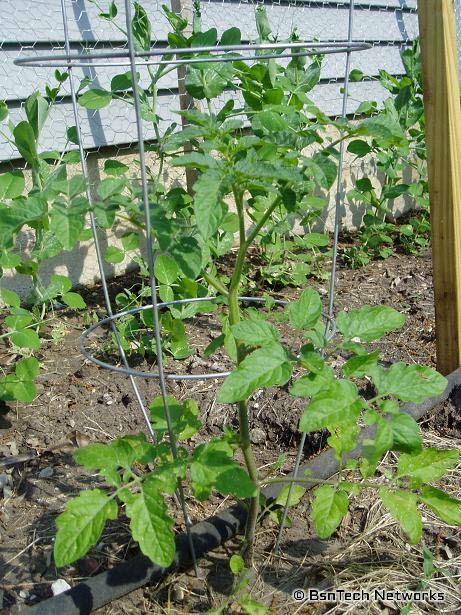 A close-up of one of the tomatoes in the garden.  They have at least doubled in size since they were put out two weeks ago. 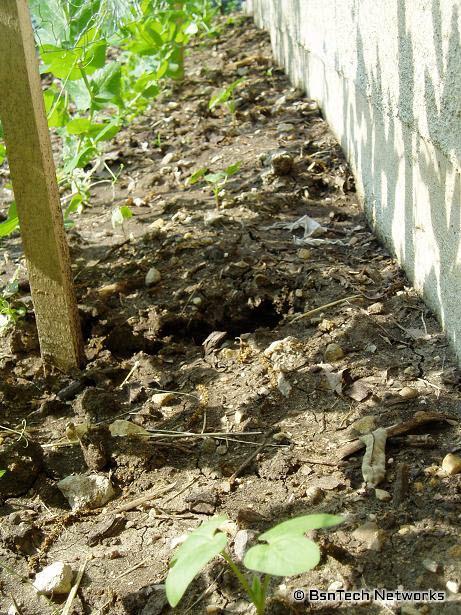 Here are the three cucumbers that have sprouted.  I believe these are the burpee picklers.  None of the marketmore 76 cucumbers came up – but I think it is because the seed was at least two years old.  That is unfortunate because that means no large cucumbers this year.  It was hard to take this picture because I put them behind the peas so they will use the same fencing.

Welp, everyone come back to see next week's update!  Not too much longer and I believe the peas are going to start putting on flowers and making those edible pods!