Quite a lot has happened since the week before when I first planted out some seeds.

Last time I planted out three of the following:

The goal was mostly to test the soil that I have picked up from the Macon County Compost Facility where they have an 80% horse manure mix and 20% compost mix.  Out of all of those, the following sprouted:

I'm not sure what to make of the pepper plants not coming up.  I'm sure the bean plants didn't sprout because the seed is at least three years old and was not taken care of.

Here are the seedlings that sprouted along with a picture of my fluorescent light unit: 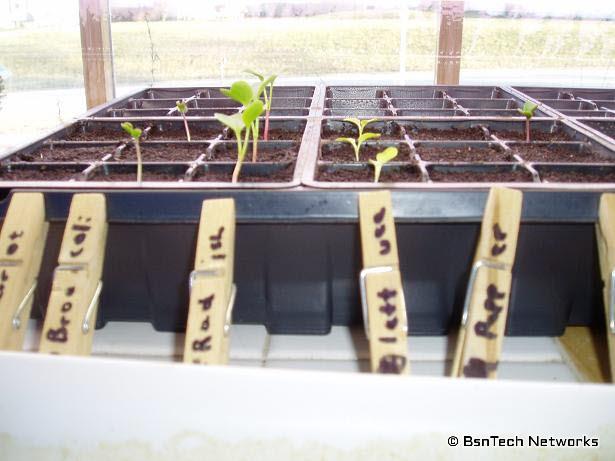 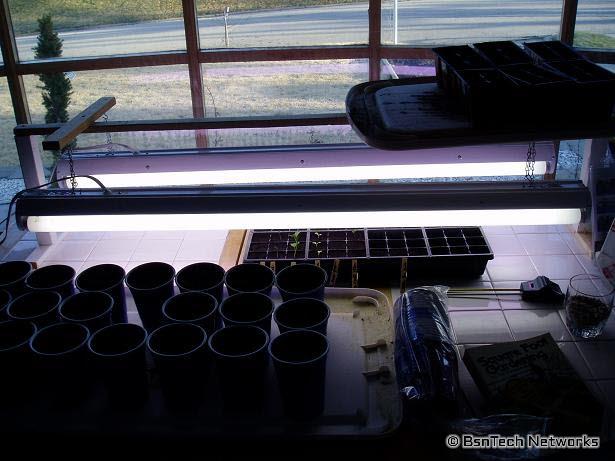 I have two fluorescent fixtures that hold two 40 watt bulbs each.  I have two standard bulbs and have two grow-lux bulbs – which you can't see in this picture.

You'll notice a whole bunch of cups right up front in the last picture.  On March 14th, I planted ten more broccoli and ten more cauliflower plants.  I need at least eight of each to sprout to put in the garden.  So far as of this writing, there have been three broccoli and two cauliflower that have sprouted out of these containers.

I also transplanted the two other broccoli and cauliflower from the small six-packs to the 16-ounce cups as well.  After a week between the pictures, they have grown quite a bit! 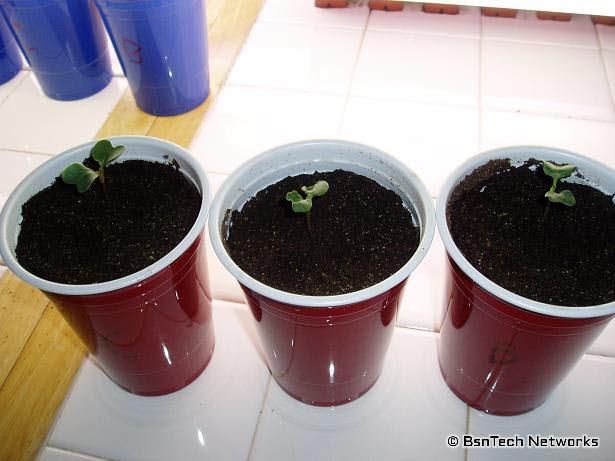 Out of the three, the cauliflower (on the left) looks the best out of them.

The lettuce has also grown very well as well: 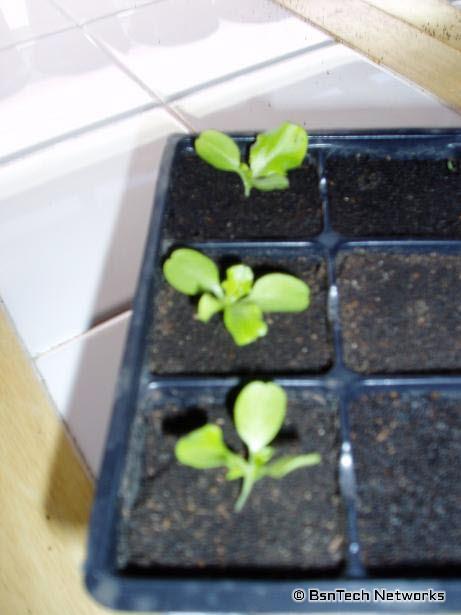 We had some pretty good weather at the beginning of the week – in the 60's – so the plants were all put outside to get the benefit of direct sunlight.  Thursday and today it has been in the 50's so I have kept them in the house under the lights.

On Thursday, I received the test results back from the lab that did the soil test.  I was pretty surprised with the results, because the home kit showed something completely different.

I'm surprised the organic content is that low, but I don't really know too much about that number.  However, I called the lab and they said that optimal phosphorous levels are 50 lbs/acre and optimal potassium levels are 300 lbs/acre.  That means I have six times the amount of phosphorous and almost 3 times the amount of potassium!  They said that it will not harm the plants, it will just remain in the soil and eventually will be used up.

I was a bit worried still about the pH – but at least it wasn't the 8.0 that the home tests said it was.  They said to spread sulfur over the area at a rate of about 5 pounds per 1000 square feet to get down to a pH of 6.5.

I got my front yard garden bed all filled in with the compost from the county compost facility and then spread about a half pound of sulfur over the area – it is about 80 square feet.  I did not use elemental sulfur like other websites say to use since I couldn't find any locally.  A local store did have a 2.5 pound bag of sulfur that also has gypsum and calcium in it.  I hope that is enough to get the level down to at least 7.0 or lower.

I also have been filling the bed along the back driveway.  With this bed, I'm being a bit more picky with the material from the compost facility since carrots will be in this bed – and they do not tolerate big chunks, wood, or rocks.  So, I have been sifting through all of it.  So far I've put in a couple hours over two days and have filled about 1/8 of it.  I still have a ways to go! 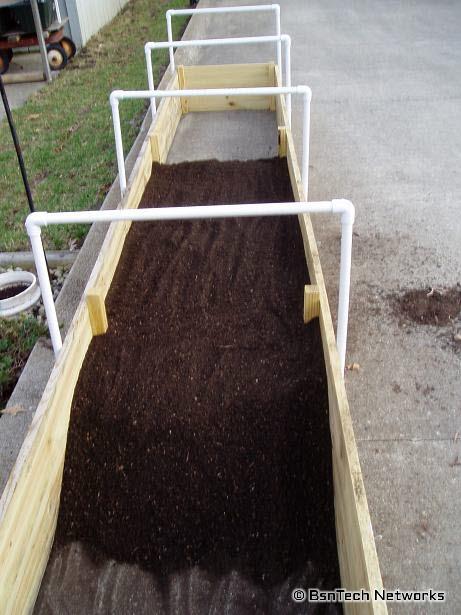 I also have some PVC pipes up so I can put some clear plastic over the top of the area to make it enclosed.  I will do this after I plant the carrot, onion, and radish seeds in here to keep the rain from beating down the plants.  Once most of them are all sprouted, I will take the clear plastic off and replace it with a deer mesh netting to keep the deer, birds, and other animals out of it.

Well, that is all for this week's gardening adventure.  I hope I get some pepper plants come up sometime soon – it has been two weeks now for the first set of three and nothing has sprouted!  I alloted space for eight pepper plants in the garden, so I hope I can get that many!