The growing season is coming in fairly quickly!  I have been getting ready and making new spots in the yard for the garden this year.

Last year I had good luck growing tomatoes and corn – but that was about all.  The corn was even a bit stunted because it was grown between the house and garage – which is a sliver of five feet so when the sun was moving directions, some corn only got maybe an hour of sunlight a day.

This year I am doing things completely different and there is quite a start-up cost involved in it unfortunately.

I have been reading the "Square Foot Gardening" book by Mel Bartholomew which was given to me by my grandpa.  In the book he details how you can save much more space and get more yield out of the square-foot method of a garden versus planting in rows and using all that space.

This works with what I am needing to to – because I can't have the typical garden in my yard since it is a big garage and a concrete driveway in the backyard.  So, this year, I am making two large container growing units.

The first one is 2 foot by 16 foot long and is 1 foot deep.  I set it right on the edge of the driveway and is pointing north/south.  On the north end of the container, I also have an area that is 2 foot by 3 foot marked by posts that are three-feet high.  I was reading online on how to maximize space for potatoes – and you can grow potatoes vertically and they will branch out and make potatoes on their way up as long as you keep covering all but the first inch of the plants up.  So, as the plants grow, I will add more 1×6 pieces of wood around those posts and fill with more dirt.  This way I will potentially have a good amount of potatoes in a small space.  One website I found said that in a 4 foot by 4 foot container that is 2.5 feet tall yielded about 100 pounds of potatoes. 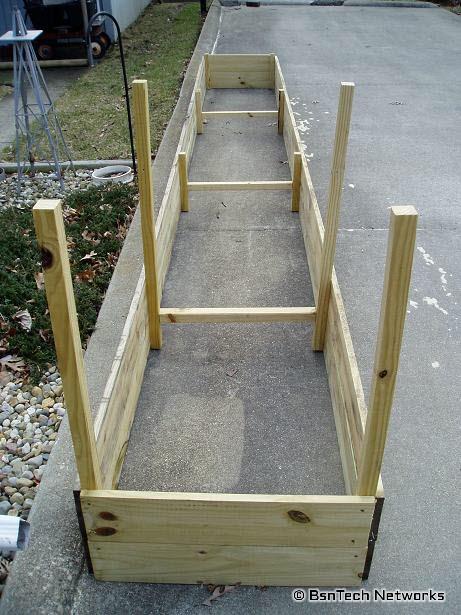 I started woking on the second container yesterday.   For the second container, I had to dig up part of the front yard – again right along the driveway.  Last night I excavated a pretty large portion of sod, but I still have about 25% to go – which is because I decided to make the container bigger since it would only cost another $4 to increase the size by 25%.  This container is going to be 4 feet wide by 20 feet long – and will vary in depth since it is on a little bit of a hill.

So far this project has been fairly high in price – but hopefully in the long run I will get the investment back out of it.  For the 2×16 container, the cost was about $70 ($15 was from the extra wood for the vertical building of the potato box) and for the larger, 4×20 container, the cost was $53.  I made sure to use the arsenic free treated wood so they will last many years.  The cost is fairly similar although they are different sizes – because I only need one 1×6 board on one side of the large box and 2 1×6 boards on the other side because of the hill.  So effectively it needed three large boards for the length, but the smaller box required four. 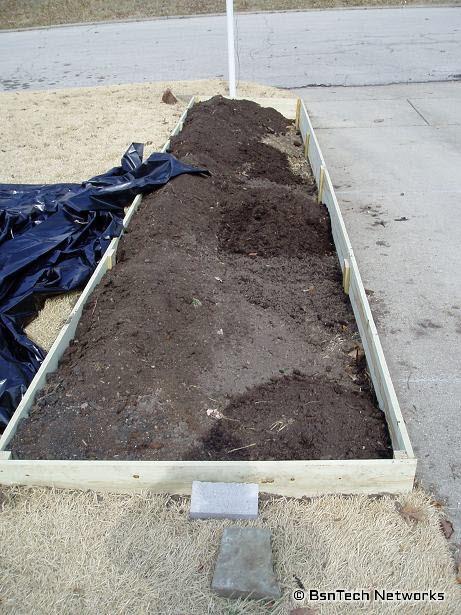 Now – the question is what to fill the containers with?  Luckily we have a county compost facility just about two miles down the road from us.  I called them yesterday and spoke with a person there.  They informed me that they have a special heap of compost for gardeners that is rich in many organics including some manure.  He forwarned me that it is pretty "rich stuff" and said that it needs to be mixed in with some dirt.  I asked the price and they said they give it out for FREE.  So, that sure beats buying the bags of compost for over $2 each or even topsoil for that matter.

Anyways, back to the Square Foot Gardening book.  This book is pretty good and in the back, it shows all of the information for planting veggies.  It shows when and if you should start them as transplants, when to make additional sowings, when to expect harvest, and all kinds of other information about the plants – such as sun/shade, pH for soil, etc.  I have learned through looking at the book that cauliflower and broccoli need to be started indoors as transplants at least eight weeks in advance.  This has been my problem previously as I was go out and plant them directly in the garden around May 5th – which in the Central Illinois area is a good day that shows the forst chances are about 15% from that point forward.  By putting them in so late, they never could bloom and fully grow.  So, next week I will start the cauliflower and broccoli inside.

This year I have a pretty sizable plan for growing many more things.  At the in-laws house, they have plenty of acreage so we are going to make use of it this year.  We plan to put in about 300 or so stalks of corn and will also plant some rows of potatoes for the extra seeds I have left over (it will only take about a pound of potato seed for the potato box, which leaves me with four pounds left that I don't want to waste).  In addition, I have purchased nine grape vines that will be put up at their place as well – three vines of the Catawba, Concord, and Niagara grape varieties.  We are using this to make wine – and with three vines each, they should each produce about three gallons of wine for each variety.

At the house, there is quite a lot more that I will be planting compared to last year – but we have also basically doubled the size of usable garden space with the new containers.  In the 16 x 2 area, I will plant four potato seeds, 106 carrots, 68 onion sets, and about 32 radishes.  This container was designated as the container that would hold the plants that will take all year to produce or are small in size.

The larger 20 x 4 container will have 80 bush beans planted around the perimeter, 12 lettuce, 8 cauliflower, 8 broccoli, and 8 peppers.

With the square foot method of gardening in the containers, you can fit much more into a smaller space because you don't have to walk around on the soil to get to your plants.  Since the container is only four foot wide, I walk around the container and can harvest the produce without stepping foot into the container.

The garden space used last year will have sugar peas and tomatoes.  I know you are not supposed to plant tomatoes in the same spot for two years, but at this point I am still limited in space.  They will be put behind the garage in a 24 x 3 area.  Last year I planted two cherry tomatoes and three roma tomatoes.  This year I plan to do about the same – except I have some "better boy" tomatoes that I will plant in with them as well.  This way we will have the small cherry tomatoes, the oval-shaped romas that are very meaty, and then some larger ones for slicing onto hamburgers and salads.