From previous posts, I’m not sure if I’ve shown my “germination station” and what it looks like.  The basics of my plant lighting system is very basic and fairly inexpensive. 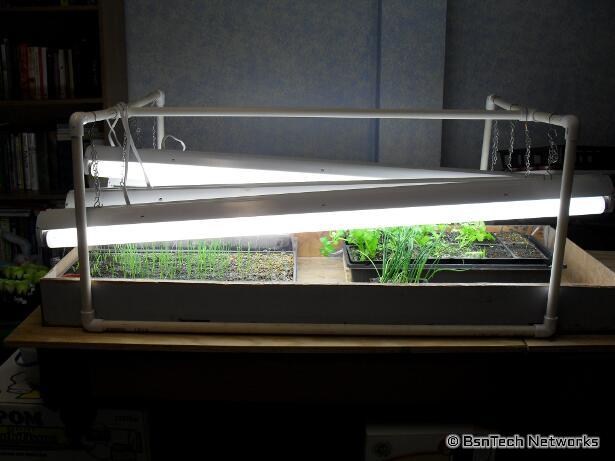 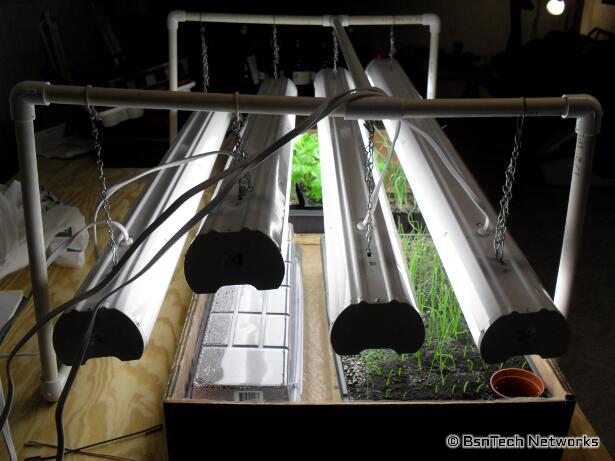 The seedling lighting system currently has four 4-foot fluorescent fixtures that have two bulbs each (8 40-watt bulbs total).  I use cheap cool white bulbs and they seem to do just fine.  No need to get those expensive grow bulbs – and I actually have better results with cool white than I did the grow bulbs.

I then constructed the hanging system from cheap 1/2-inch PVC pipe.  Based on my other blog posts about my PVC irrigation system, you can tell that I really like using PVC pipe..  For this system, I needed about 20 feet of pipe (less than $2).  I then needed eight 90-degree elbows (another $1.60 or so) and two “T” connectors (less than $1).  So the support structure was less than $5 to construct with PVC pipe for the plant lighting system.

The four-foot fluorescent fixtures cost about $9 each – so this is where the money gets involved.  I was also using premium cool white bulbs in three of the four fixtures.  Two of these bulbs were costing me almost $7.  But when I just recently set up the fourth fixture, I purchased the cheaper utility cool white bulbs and they were $3.50 for a set of two.  The difference between them was very minimal; the watts were the same but I believe the light output is just a bit less.

Luckily we use these four-foot fluorescent fixtures in the basement for lighting above our suspended ceiling, so when it comes to growing time, I just pull out the fixtures from the ceiling, add the better bulbs, and I’ve got a system.

Unfortunately I don’t think I’ll have enough room – even after adding a fourth fixture to the system this year.  I’ll be growing almost four times the amount of broccoli and other larger plants that need space to grow.  I always put them in 16-ounce cups ($1.99 for 40 of them).  Based on four feet of light and cups with a diameter of 3.5 inches, I’ll only be able to fit 13 of these cups under one light.  Ouch – that barely covers the number of cauliflower I’ll be growing.  Not to mention the 25 broccoli, 10 peppers, and 5 tomatoes.

The current plants are still growing very well – too well actually.  We’ve had a bit of a warm-up recently and I actually took the plants outside this past Sunday for a few hours to sit in the sun.  It was about 60 degrees in the sun (under the lights it ranges from 59 degrees at night when they are off – to about 70 degrees when they are on).

When taking them outside, I looked under the plants that have been growing since mid-December.  Those were done only to test seed viability – but I opted to keep them to see if they would make it to planting outside.  Anyways, the onions and celery that were planted two months ago – are now root-bound.  I planted two onions in each cell of nine-packs – so I expected those would get root-bound.  The celery are planted in three-packs (already transplanted from six-packs) – and the roots are beginning to come out of the bottom.  So, it looks like I’ll have to get the 16-ounce cups out and transplant again!

Here are what the 8-week old Ventura celery plants look like.  They are doing very well – even better than what they were last year in eight weeks.  I attribute this to using compost tea mix that I had left over from last season to water them. 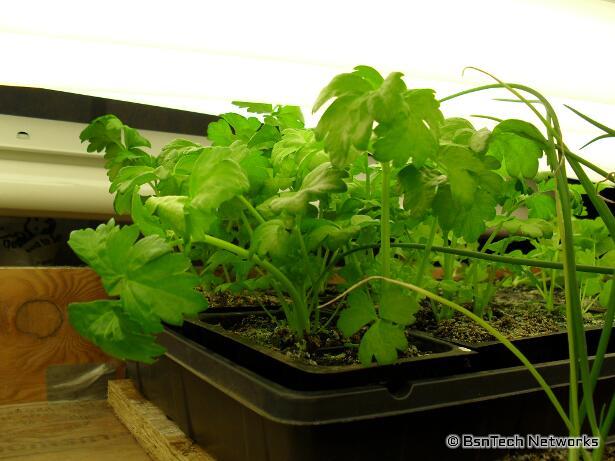 On the left in this picture shows the eight-week old Copra onions.  On the right is all of the celery plants.  In the front are seedlings that are 15 days old followed by month old, then two-month old. 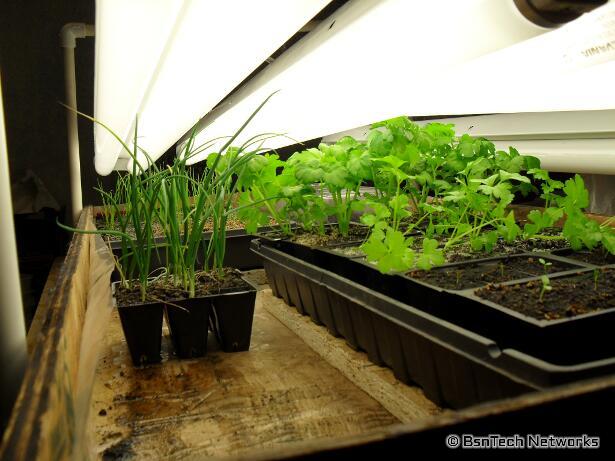 And here are the onions that were planted on January 20.  I planted all of these onions in one tray.  The tray is about 10.5 inches wide and 21 inches long.  I stuffed 200 seeds in here to start with.  Of those, about 130 came up (since the onion seed is a year old).  I then added another sowing of 36 seeds (finished the packet off from last year) and about 26 of those have come up.  Out of the 156 that have germinated, about 149 are still surviving.  Behind these is the covered container of 136 Varsity Onion seeds that were planted.  It has been five days since those were seeded and none have germinated as of yet (also year-old seed). 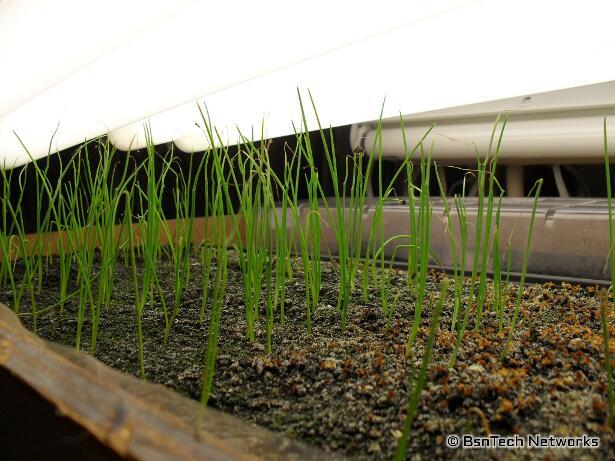 Hopefully things will be ready for planting out.  I started onions and celery – in some cases – almost a month earlier than I did last year – because when they were planted in the garden, they just were not ready for planting.  I may have planted them too early this year; only time will tell.  Last year we had a fast heat wave that hit the area – so they were able to get planted out in mid-April.  This year – depending on the weather – they may be planted out after that or before that.