Recently I purchased four Chauvet Intimidator 1.0 lights.  Three of them I purchased from someone on eBay and the other one I purchased through the company that we ordered most of all our DJ equpment through – Entertainment Systems Corporation (ESC).  I’m still awaiting the one from ESC – which is due Tuesday, but that doesn’t stop me from playing with them! 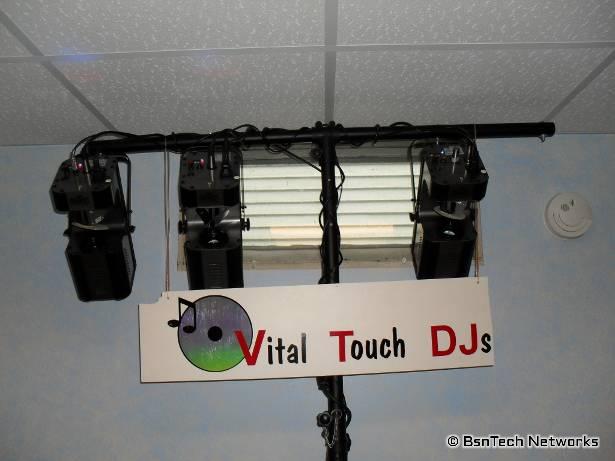 I managed to pick up the three Intimidator 1.0 lights on eBay from someone for $225 – including shipping – and including the Chauvet CH-X blackout controller.

I then had to order some DMX cables to link them together in master/slave mode and also ordered some extra bulbs.

Well, the three lights came in and I got them mounted.  First off, I noticed a problem with one of the lights – which the guy on eBay told me about already.  One of the lights had a problem with the up/down movement of the scanning mirror.  It seemed that the mirror would be almost horizontal to the lens on the light – and therefore the light would shine right back into itself.

I first thought this was a problem with the motor – because it would go “one click” above that horizontal location, but wouldn’t go any higher.  After further investigation, the mirror assembly was put on WRONG!  There is a metal bracket that holds the mirror to the up/down mirror. 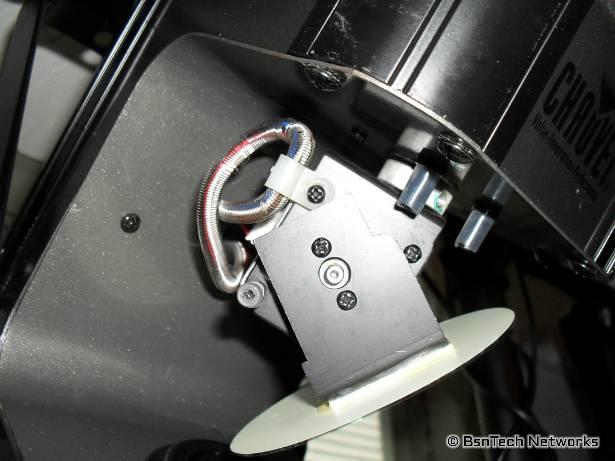 So above shows the bracket held onto the motor with two screws.  You will see a circular-looking thing in the bottom left corner of the motor.  This is a screw with some rubber on it that prevents the mirror bracket from going into a horizontal position.  Well, the above photo shows the mirror assembly in the correct fashion.  What happened was either a manufacturer defect – or someone that took the mirror assembly off – put it on backwards.  There is a little notch up at the top of the mirror assembly and it was down at the bottom in the wrong location!  Because of this, that notch was allowing the mirror to go in a horizontal position in comparison to the light’s lens.  Well, this apparently confused the light because it wouldn’t move up normally.  But after turning the mirror bracket around, all is fixed!

So I’m playing along with the lights… and I notice another problem!  It seemed that one of the lights was putting out a combination of two gobos at the same time.

Yeah, that is ugly!  It seemed that it was showing about 3/4 of one gobo and 1/4 of another gobo.  It was annoying to say the least and really made a dent in the “light show”.

Now of course, this will indeed void your warranty – so only do this if your warranty is over.  I didn’t have a warranty since I bought them used, so I opened up the thing.

Here is another look with the lens of the light off – looking down into the light.  You can see that two gobos appear. 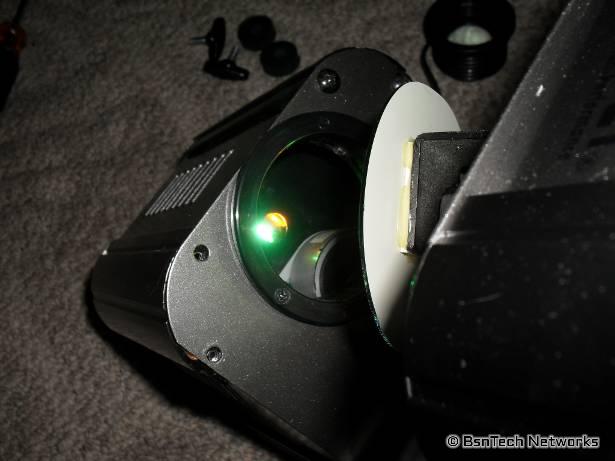 I’m not going to go through everything I tried to fix this, but I played with it for at least three or four hours before I finally figured out how to fix it.

The gobo wheel is attached to a motor inside your unit.  On the bottom of the gobo is a round disk with a shaft pointing through. 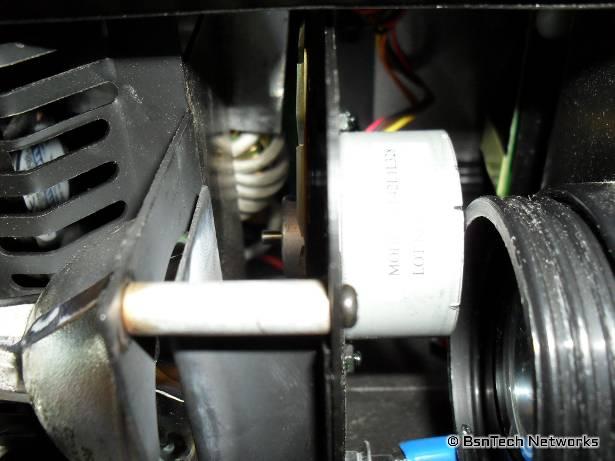 Up above you see the black lens on the very right side.  Then the round cylinder in front of that is the gobo wheel motor.  Then to the left of that is the gobo wheel – very thin so it is hard to see.  Near the back, you will then see a small shaft – looks kind of like a needle.  Below is a closer picture of that piece – although blurry.  The camera didn’t do very well in that tight spot. 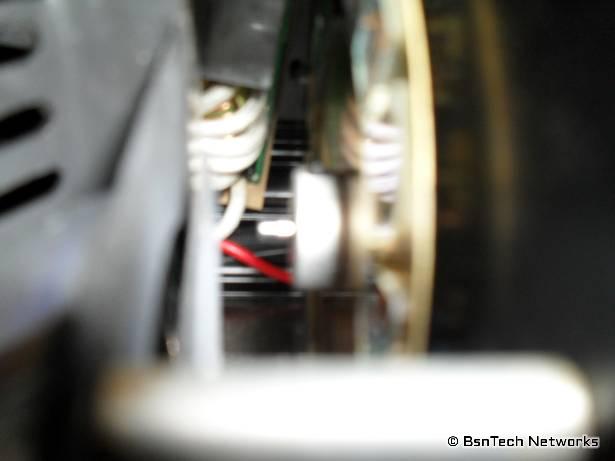 So the gobo began slipping again after a little bit of use.  I suspect that it is because when the fixtures start up, they bang the gobo wheel against a screw to reset the location of the wheel and so the fixture “knows” what gobo is showing up (blackout by default).  Since I was able to just hold onto that shaft/needle with some pliers and move the gobo wheel, it makes sense that this occurred because the wheel is loose.

So, I had to actually super glue the bottom of that shaft/needle where it goes into the cylinder that screws onto the gobo wheel.

I would advise you that you had better get it set correctly the first time around – otherwise you cannot move it and make changes!

Here is how I did it.  Unfortunately I didn’t take any photos of this procedure.  Take the full gobo wheel out along with the metal bracket it sits on.  Do not disconnect any of the wires though.  If you have to disconnect the two red wires connected to the metal bracket (for grounding), ensure you hook them back up after you get the gobo wheel removed.

Now reapply power to your wheel.  You will see what I mean with the gobo wheel having a tab that bangs up against a screw with some rubber around it.

After the fixture has set itself, ensure that the tab on the gobo wheel is right up against the rubberized screw.  After you are absolutely positive that it is set correctly and in that spot, pull the power plug.

Let it sit for a few hours and then put everything back together.  If you’ve done everything right, the gobos will be perfectly aligned and will stay that way permanently.

Now, run your lights until it gives you the double-gobo look and pull the power plug.  You will probably then need to take the lens of your light off so you can see down into the top of the gobo wheel to ensure you get the wheel aligned correctly.

Now, take a pair of pliers or something that has a good grip on it and put down into the light – and clamp down on that little shaft/needle under your gobo wheel.  After you have a good grip on it, move the actual gobo wheel with your fingers until the gobo is perfectly aligned through the hole above the gobo wheel (again, you’ll have to look through the lens area to see this).

Once you have it aligned, unclamp the shaft/needle and then plug your light back in.  It will go through the reset mode.  Play some music or just tap on the top of the light fixture and see if that fixes the problem.  It took me a few attempts to get it just right, but it is as good as new!

So, not bad.  Three Intimidator 1.0 lights for $225 including shipping.  Two of them had problems – one was easy to fix with the mirror, and the other required a little more detective work.

At this rate, I should just go in the business of repairing lights!