The work on the bathroom is progressing well.  This week had a few more updates.  The floor has been fully put in place, insulation was replaced/added, some plumbing was finished – and lastly – the new tub was installed!

Part one of the reconstruction is under way with the tub being mostly done and in place.  There is still a little bit of work around the tub that needs completed – in addition to starting to put up the concrete backer board on the wall. 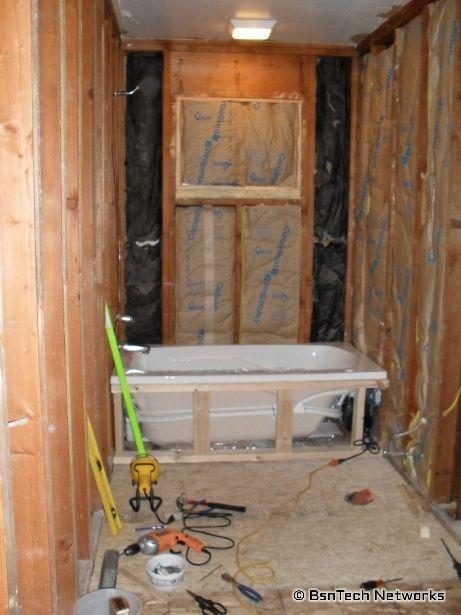 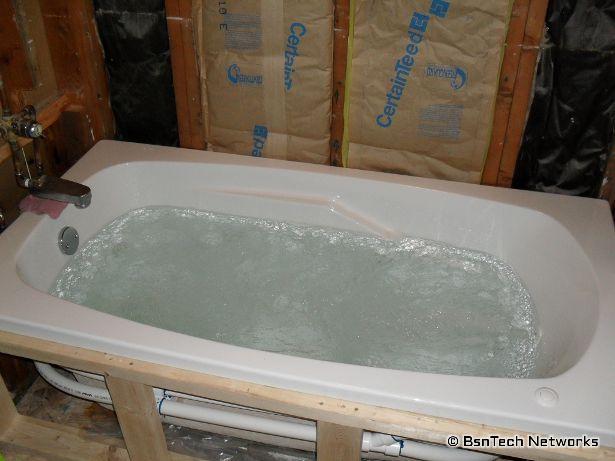 Installing a tub takes longer than one might expect.  The bathroom is exactly five feet wide – as is the tub.  It took some maneuvering to get it into place.  The drain and overflow pipes all had to be cut to perfect size and the trap and drain all needed to be installed.  The tub then needed to have a support wall (in the bottom of the picture above) added to the one side – and a 2×4 had to be put on the opposite wall to give the tub some support.  Lastly, we had to put down some plastic and sandwich some mortar mix between the two pieces of plastic under the tub to provide support at the bottom.

The cabinet and vanity has been getting finished as well.  I prefer the natural oak color – so I don’t use any stain on the wood – and just purely varnish the cabinets. 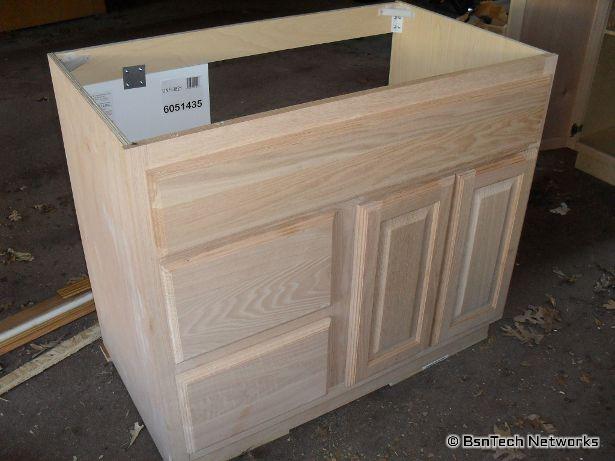 And now for the cabinet being finished. 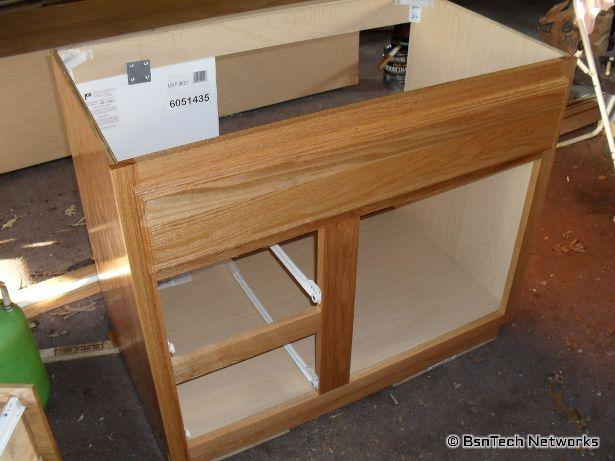 Moving on to gardening things, the corn has mostly been picked.  As I pick the corn, I’ve been taking down the stalks.  All of the corn should be done and harvested within the next week – so I planted another 50 Greencrop green bean seeds in the area where the Silver Queen corn is at. 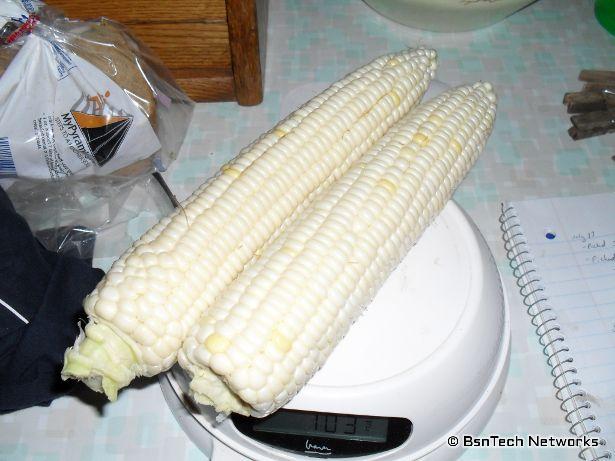 A little time after picking the corn, there was a visitor in the garden. 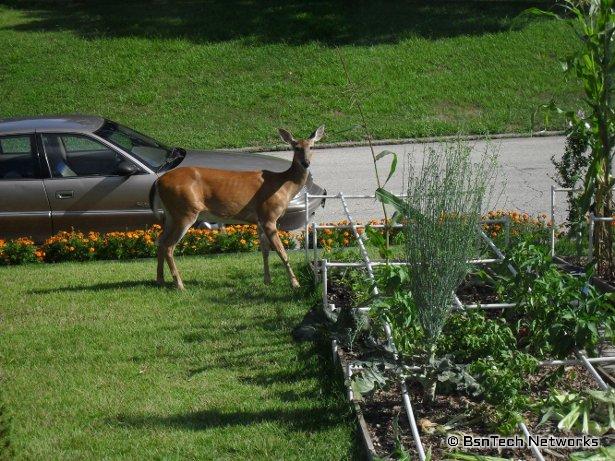 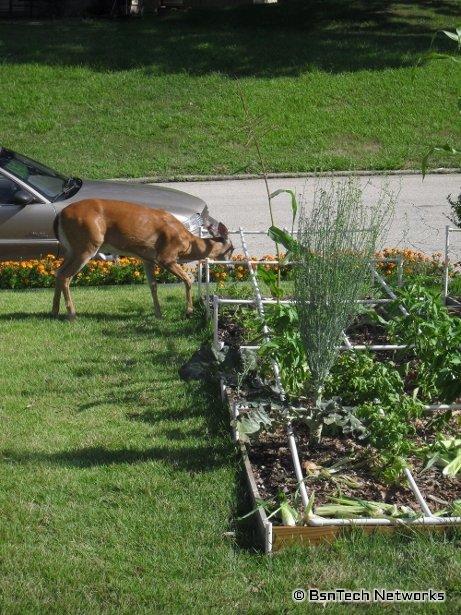 Darn deer is feasting on the corn leaves that I put in the garden!  I went out there afterwards and saw many of the leaves from the green bean plants stripped off.  I didn’t have any kind of problem with deer when the onions were still in the ground – but now that they have been pulled, they aren’t staying away!  That means I’ll unfortunately need to get the netting out soon and put around the area to keep them out.

Speaking of onions, all of the Copra onions were pulled this past week.  There was a total of just about 20 pounds of onions from about 70 total onions.  Just over 100 onions were planted outside so 70% of them made it to harvest; others rotted or never grew after they were transplanted out. 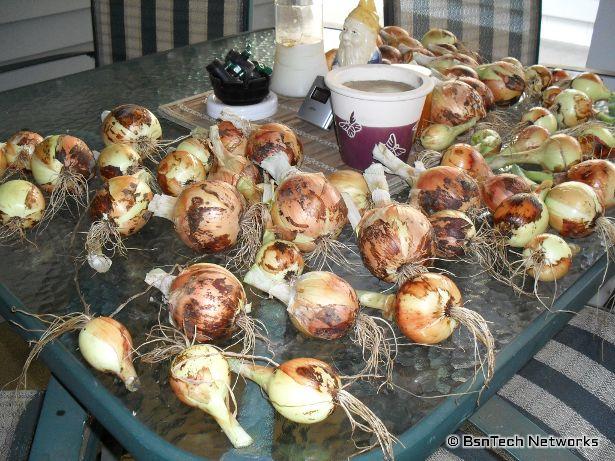 We chopped the tops off and the wife filled a gallon ice cream bucket with chopped-up green onions – that were then put in a bag and went into the freezer.

A few more green beans were picked.  This year the bean production is down substantially.  Last year we had about ten 1-gallon freezer bags full of green beans.  We haven’t filled up one yet! 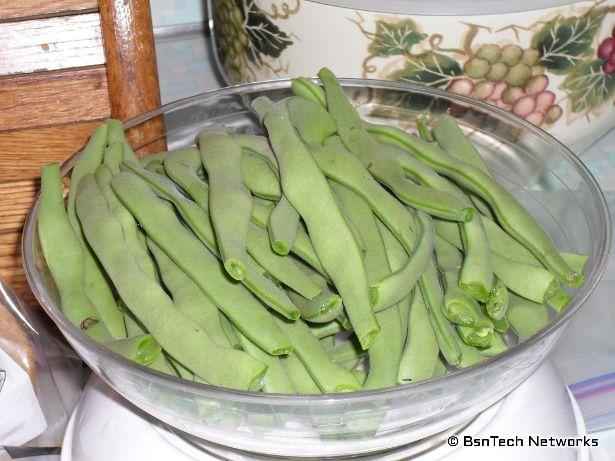 The back garden is still it’s usual self; very overgrown.  The potatoes seem to be dying back now so it is getting easier to walk back there.  But now the weight of the cucumber plant is pulling the fencing down. 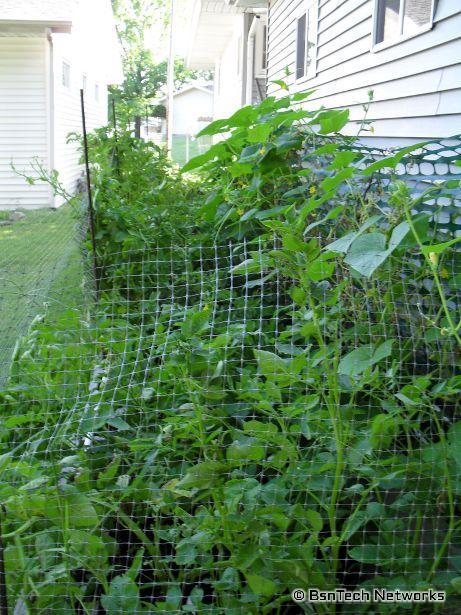 I’m not impressed with the Straight Eight cucumber plants.  They are very small and while they do have some blooms on them, very few – if any – cucumbers.  Below is a photo of one of the Burpee Pickler cucumber plants.  All three of this variety are huge and growing well. 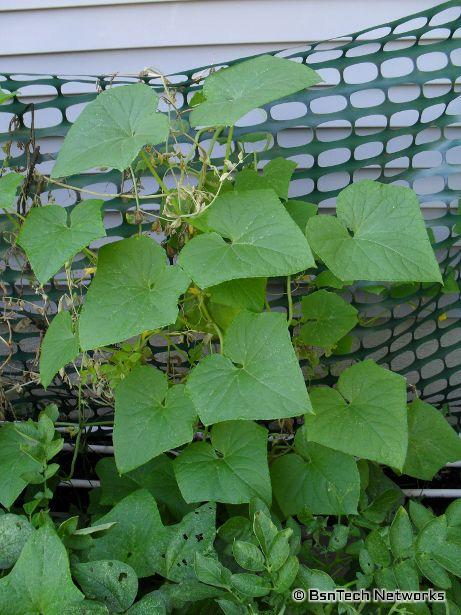 There is even a cucumber started here. 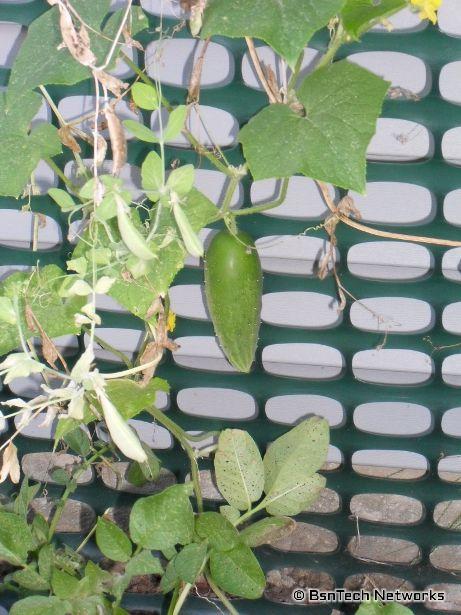 Unfortunately with as busy as I’ve been, I haven’t been keeping up with things as well.  When I was taking the pictures, I saw two large cucumbers that were already turning yellow.  Maybe we can still use them for something. 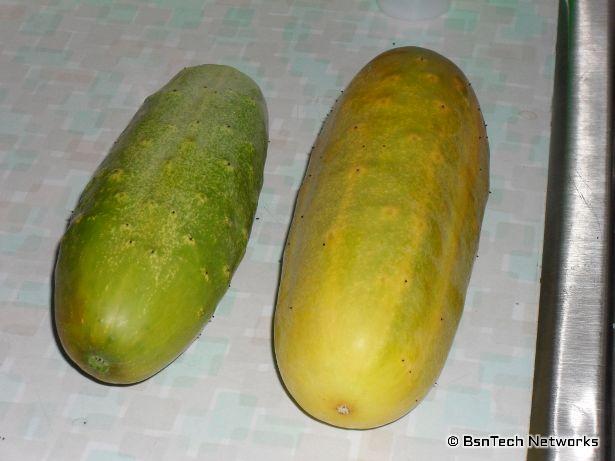 The patio garden has also been growing very well.  The greencrop green beans in this bed are by far the largest of the plants so far.  I’ve also pulled all of the cilantro out from the patio bed – and the basil is still growing very well.  The parsley – which is at the bottom of the photo – are doing well too.  I’m just not sure when to harvest the parsley – or what we’re going to use it for! 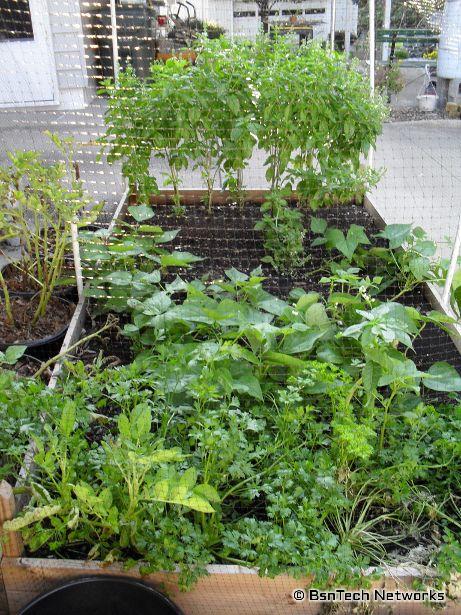 One of the potatoes beside the patio garden was harvested. 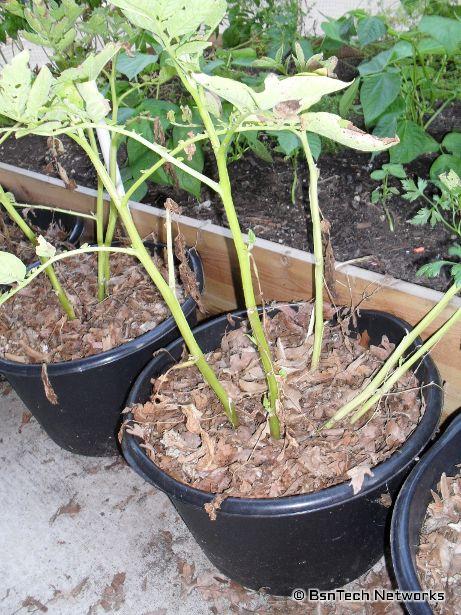 Above is one of the buckets that was pulled out.  It yielded just a bit more than a half a pound of potatoes.  They were all quite small and all were less than two ounces each.  They will be good for mashed potatoes but otherwise not much else can be done with them.  They look big in the below photo, but they are not at all. 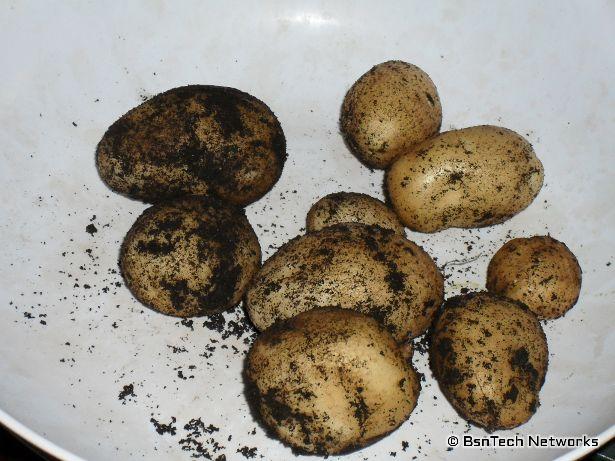 The side garden with all of the tomatoes is still producing well.  We’ve picked over five pounds of tomatoes this week.  We still have a lot more that we need to make some salsa. 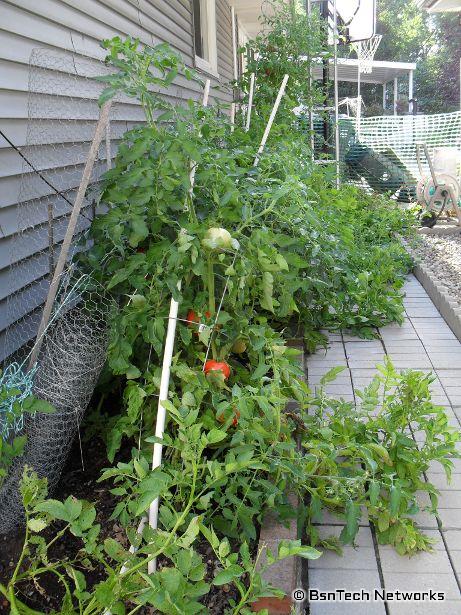 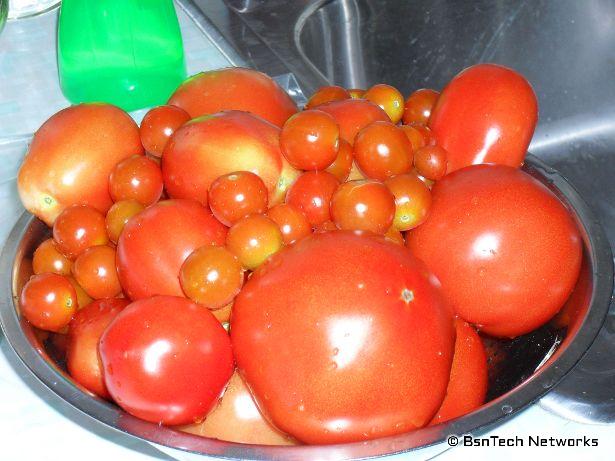 And lastly – going to the front garden. 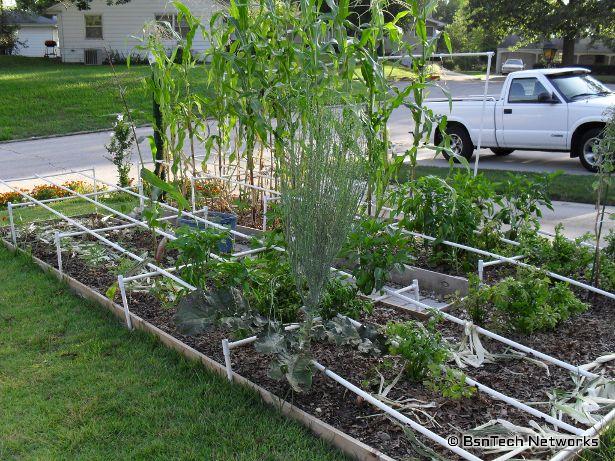 As you can see, almost all of the corn has been taken out in one part of the garden.  This was the Sugar Dots corn that did not yield very well.  The Silver Queen corn is still there and has yielded quite well – but I’ve found a few ears that have been ripped off by the deer as well.

The celery is doing very poorly – but I just cannot get myself to rip it out of the ground quite yet.

The peppers have made a bit of a comeback and do have some peppers coming along, but we are not getting nearly as many as we did last year. 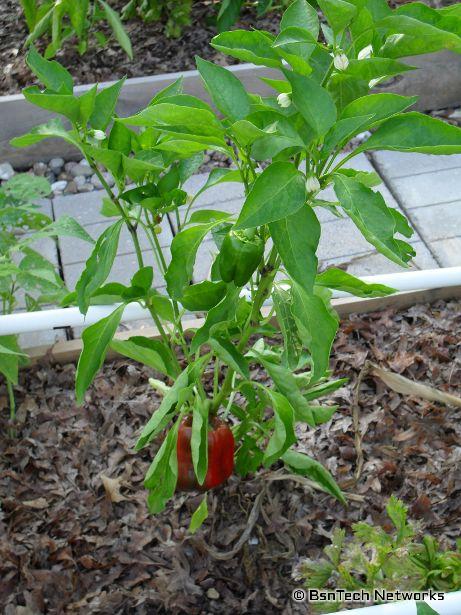 It is quite sad; I increased the garden square feet by almost double this year and the output may be less than what we had last year.  The question is still out on the amount of potatoes we get.  Last year there was about 250 pounds of produce from the garden.  This year I bet we are at 50 pounds or less so far.  But, on the other hand, there is still a lot that needs to come out.  The carrots need to be picked still (estimating about 10 pounds of carrots) and I’m hoping we’ll have 80 to 100 pounds of potatoes.  A lot of tomatoes are still on the vines and I’m betting at least another 50 pounds of tomatoes.

The thing that caused the issue this year is the heat.  The heat basically put a stop to the cool weather crops.  The lettuce had a very poor showing and only yielded about 1/6 what we got last year.  Same with the peas; we had maybe two pounds of peas and last year we had over 12 pounds.  Then the heat is causing havoc on all of the plants.

The other issue this year is that I used basically a full 20 x 4 box for corn – and the corn is doing alright, but not nearly as well as expected.

But on the positive side of things, we are getting produce and filling the freezer.