This past weekend the wife and I made some homemade salsa with all of the veggies we've had in the garden.  The salsa we made doesn't have near the number of ingredients that other canned salsas have – just because we wanted to stick with what we have for the most part.

The ingredients below made exactly seven quarts of salsa.  What is nice about this is salsa sold at our local supermarket goes for $1.49 for 24 ounces.  Quarts contains 32 ounces so the quart containers are 50% larger than the 24 ounce jars sold.  So, I figure that means the cost of a quart of salsa would be $1.49 + ($1.49 * 0.50) = $2.24 per quart of salsa.  Now figure that times seven quarts and we made approximately $15.68 worth of salsa – out of mostly things around the house!  Granted, I did have to buy a few things but overall, it maybe cost $5 in supplies (after the jars of course) to make the salsa.

The tomato paste just helps to make the salsa a bit more consistent and less watery.  However, by the time we were done, there were mostly big chunks.  The salsa was still a little watery, but by the time you add all the pepper and onion in, it adds a bit of extra flavor when combining all of the other spices.

Now it is just a matter of slicing up all of the tomatoes, peppers, and onions very finely.  All of the other items were added to a large pot and warmed up – the tomato paste will lose its thick consistency when heated.  After everything is all sliced up, add it to the pot and warm up very well before putting into the quart containers.

Here is our big pot of salsa cooking: 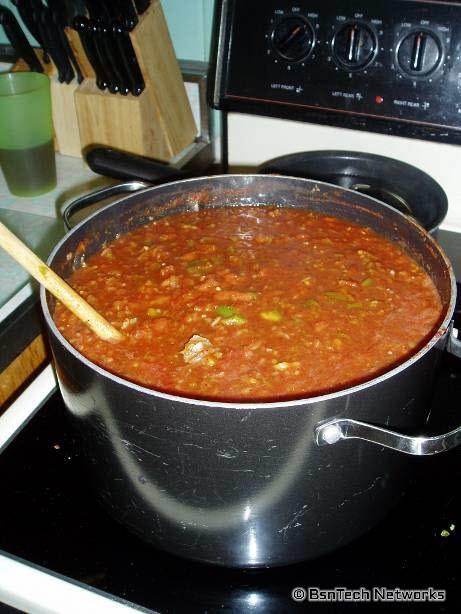 And here are the seven jars all completed! 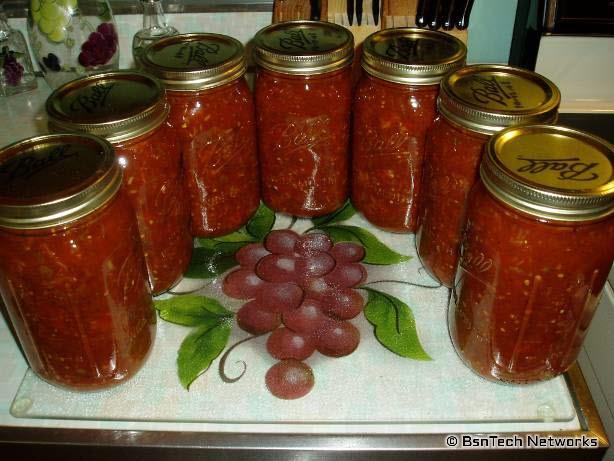 Overall, you may save mone when making your own salsa, but you sure don't save time.  It took us at least 3.5 hours to cut everything up and get the jars boiling.  Our water bath canner took the entire time to finally begin to boil so it worked out for the better.

Moving on to other gardening items, we had a major storm blow through this morning.  Unfortunately, it did quite the damage to the garden.

I didn't take any pictures of the garden with everything blown over, but the fencing around the front garden and old carrot section (where corn is now planted) were mostly toppled over.  I didn't expect the fencing to stay up very well since it wasn't meant to hold up to 60+ mph winds – hey, I didn't think we'd get a storm coming through like that this late in the season!

Well, after I got home from work, I had to go mend all of the corn – one by one.  All of them were toppled over for the fact that they were transplanted from grow pots to the garden.  So, they were not put down at a very good depth to keep them upright during high winds.

So, after a few hours of work, I managed to get all of the corn standing upright again.  They were all laying over on their sides so I had to mound up some soil around each of the stalks of corn. 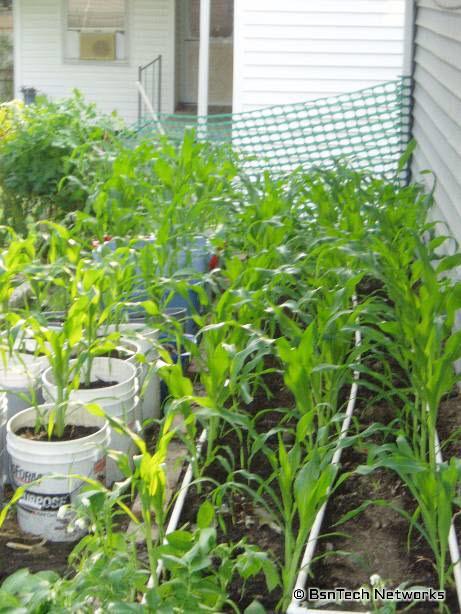 Luckily, the beans in the new container didn't seem to be harmed in the ordeal. 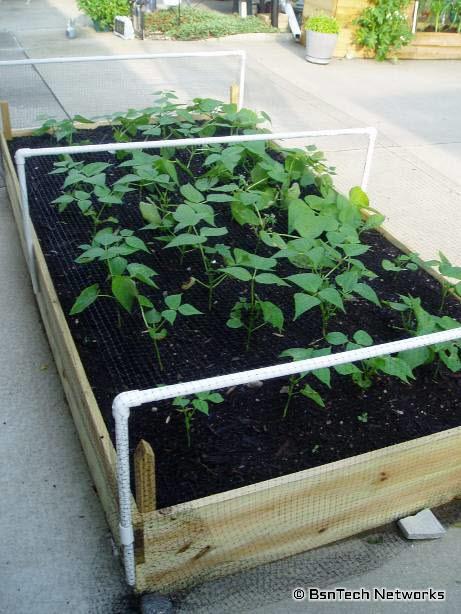 The weather has been very cool throughout the month of July.  I guess they said that it has been the coolest July on record for over 100 years here in Central Illinois.  Well, it is going to warm back up again.  They are predicing higher 80's throughout this week and up to 94 on Sunday.

Speaking of Sunday, last Sunday (just a few days ago), I planted another 21 seedlings of Black Simpson Elite lettuce.  The weather tricked me into thinking it would be in the higher 70's for the rest of the year, so I wanted to get a start on some more lettuce.  I'm hoping to get at least 12 of them to sprout.  Last time we only had 12 lettuce plants and we got over 10 pounds of lettuce this past spring!  Don't ask me where it will go in the garden areas – because there is simply no room left anywhere to put more lettuce!  I guess we'll just have to find some more pots or containers to put them in.