Wow – three posts in three days!  There is just a lot that I've done over the past few days that I think would be beneficial for folks to know – or just sharing of what is going on around the garden.

This post is about how to make compost tea.  What is compost tea?  It is free liquid fertilizer.  It is said that some of the biggest and best producing plants are fed compost tea  – both on their leaves for immediate absorption and in the ground for root absorption.

After reading all of the benefits of compost tea, I wanted to give it a try.  Actually, I accidentally discovered it.

Last year I made a compost tumbler out of a 55 gallon drum.  This was then put in with the rain barrel system.  After several downpours, I went out to turn the compost tumbler and this brown liquid started coming out of the "door" when it was being turned.  Quickly I put some buckets underneath after I realized this was compost tea – perfect liquid fertilizer!

Then I got to thinking.  Last year I filled another 55-gallon drum with leaves from when I cleaned up the yard. 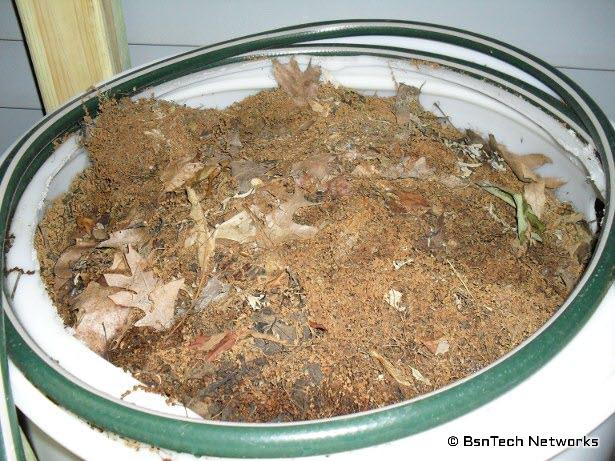 So I added a spigot at the bottom of the container. 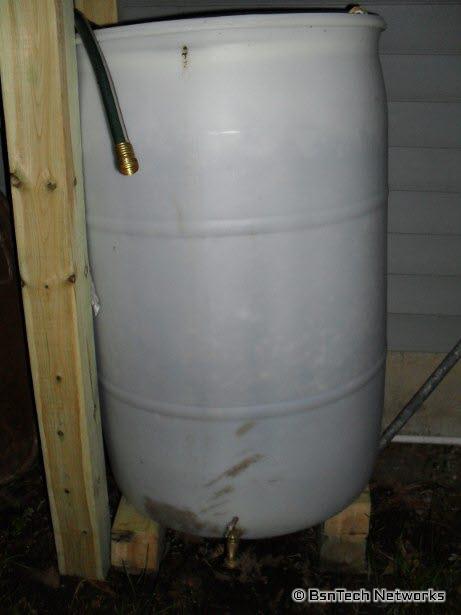 This was the 55-gallon drum that I cut the top off.  This was originally going to be used as a stand-alone rain barrel before I thought of the system that allows all of them to be hooked in sequence.  So, after putting the spigot at the bottom, I filled the whole thing up to the top with water.

I've been using the compost tea on and off.  However, the leaves and other debris at the bottom of the barrel seems to really slow the flow of tea from the spigot; it would take about a minute to just get 1/2 a gallon out of this!  Since I'm impatient, I decided to do something about it.

This evening I bought a 32 gallon garbage can, another spigot, and a 1/2" threaded nut and made another container. 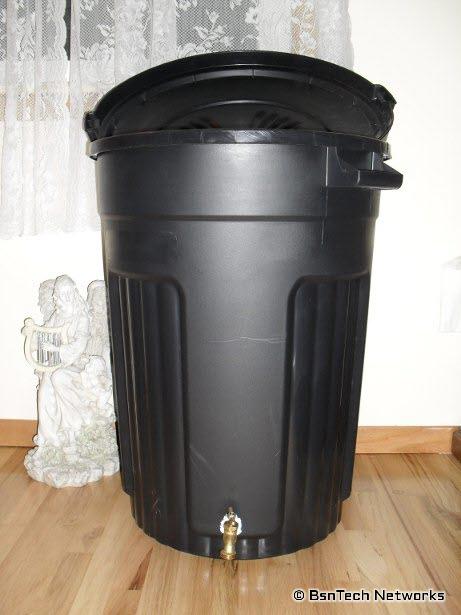 The white stuff around the spigot is Dap caulking sealant.  This was placed on the inside around the hole before the threaded nut was attached and was then also put around the hole on the outside (as seen above).

This container will be used to hold compost tea that is read to be used.  I'll empty the compost tea out of the main 55-gallon barrel into a five gallon bucket – which may take 30+ minutes to fill.  Once the bucket is filled, I'll dump it into this 32-gallon garbage container so the flow isn't hindered when I am ready to use it.

I'd highly recommend using compost tea if you can.  It is quite easy to do and nothing technical is required.  It is perfect fertilizer for your plants and will save you a lot of money by using this organic fertilizer – instead of going to the store and buying fertilizer.

Make sure that when you water your plants to get all of the leaves of your plants wet with the tea.  The leaves will absorb the nutrients directly – and the roots will also absorb.

Here is a link to my YouTube video on how to make compost tea.