In the last post, I commented on making lettuce more reliable with a technique for seeding.  This entry just shows the germination area a bit to see how things are going.

I have ran into a few problems with growing from seed this year – namely germination issues.  However, the seed is also getting older.

For starters, the onion seed did very poor.  I did purchase new seed this year, but I found some older seed that was about two years old.  Therefore, I opted to use that first.  Out of the almost 100 onion seeds planted, maybe four came up.  Very bad.  Onion seed just doesn’t seem to stay good for very long.

So I opened up a pack of seed that was about a year old and planted those.  Much better.  Out of maybe 150 planted, around 60 or so came up.  Just guessing since I didn’t count. 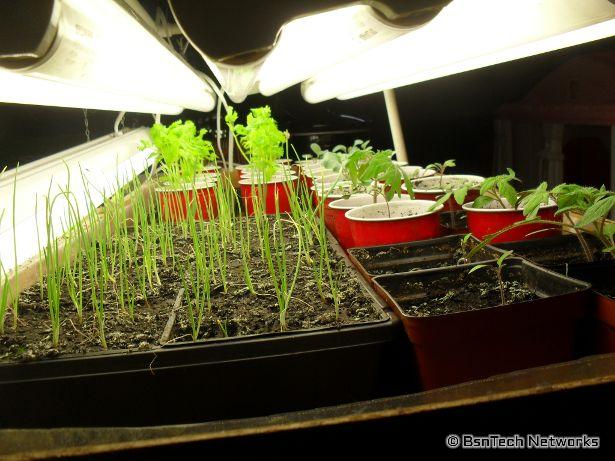 The celery did very well – with almost all of them sprouting.  That seed is three years old.  the celery is all the way on the back right – somewhat hard to see in the picture above.

The peppers and tomatoes did poorly as well.  Out of about 20 seeds, only four came up.  We seem to always have a plethora of peppers at the end of the year when I plant eight outside, so this year that will be cut in half.

Broccoli and cauliflower also did pretty good with almost all of those seeds germinating.  However, I planted about twice as much as I did last year – so I have a feeling there is going to be some that will be wasted.  Each year in my calendar, I note what I plant what week.  Well I had already planted the broccoli and cauliflower before referring to that.

Below is the lettuce.  You can see it is going very well now that I re-seeded them. 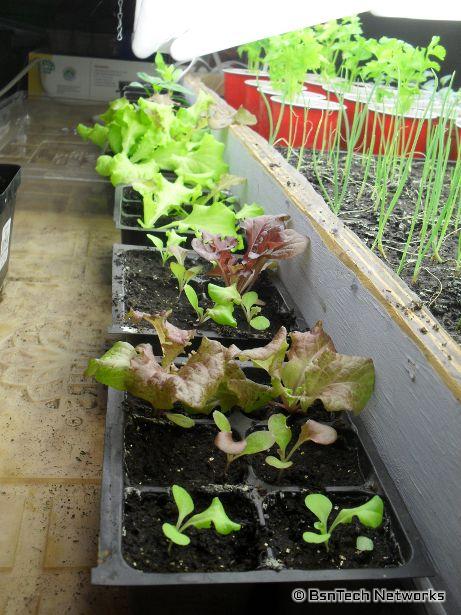 On to another topic – cleanup!  We had a pretty nice Saturday (yesterday) and so that gave me the opportunity to go out and do some cleanup.  A week ago, I also planted all of the Cascadia Snap Peas and the Kennebec Potatoes.  For once, we actually had quite a bit of potatoes left over that we didn’t eat – and so I was able to use those for seed potatoes this year.  Just hope that they come up!

Anyways, I took the opportunity to clean up the area around the rain barrels.  I had all of the 1/2-inch PVC pipe that I use for irrigation all over the place on the ground.  Looked like crap.  And, the PVC pipe has small holes drilled in to allow the water out – and some of the PVC pipes had them drilled every six inches, eight inches, 12 inches, and more.  So I had to go through the big stack and organize them so it would be easier for me to easily find the right ones that I need.

After organizing them, I got out some wood to make some supports to go between the rain barrel platform and then neatly put all of the pipes on them to keep them organized. 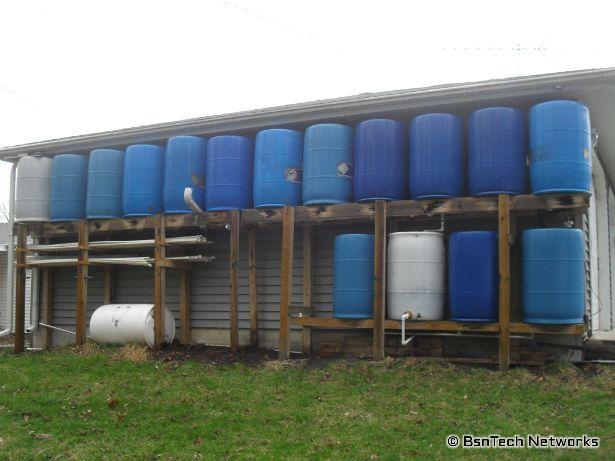 Somewhat hard to tell in the picture above, but all of the PVC pipe is now horizontal over on the left side of the picture.  I also got the leaves all removed from under the platform.

That is all for this installment of the garden blog.