Quite a few items were picked on July 30th.  Little to my knowledge, there were two nice-sized cucumbers growing that I didn't see in all of the foliage.  So, they were picked today.  There were also a few Roma tomatoes and some Better Boy tomatoes picked.

But, the big story is the peppers.  I had noticed that the pepper plants  are really growing well now that they are not bound by the bird netting at the top of the raised bed.  Since then, they have grown at least another foot.  I also noticed that the pepper plants seemed to be leaning a bit.  So, I got the knife out and picked quite a few peppers.  Overall, there were 14 California Wonder peppers harvested.  I was going to hold off and pick them when they began to get a slight tint  of red on them – which would tell me that they would grow to be any larger and they were fairly ripe.  If you let the peppers get fully red, this will stop production on the plant from producing any other peppers.

However, there were a large amount of peppers on the plants.  Some had only a few while others were loaded.  I attribute those that only had a few to being crowded in by the green beans.  But now that those plants are getting taller, they are putting on many new flowers with small peppers beginning to form.

There are still quite a few peppers left on the plants that might be ready in a week or two.  I bet we get at least another two or three dozen peppers from these eight plants.  This compost mix that was used to fill the raised beds is really doing wonders for the veggies! 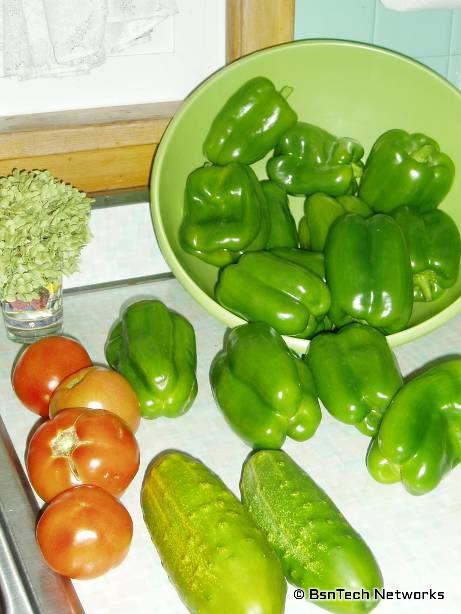