I’m very surprised how well the plants around the garden and in the germination station have been doing!  Note that most of all these were started at the beginning of March (all except the onions and celery for the most part).

Lots of pictures here for this post on the last day of March. 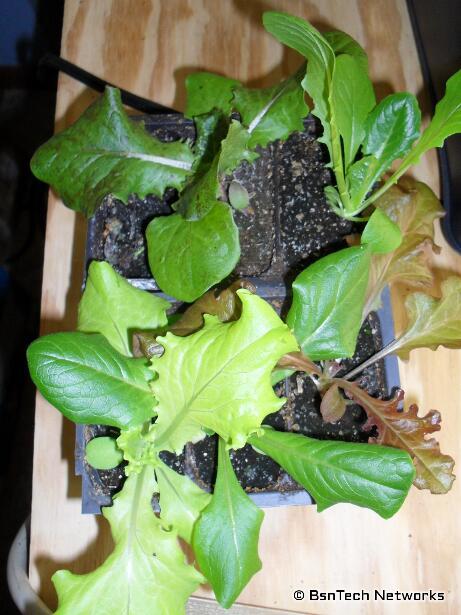 The top left of the picture is New Red Fire Leaf Lettuce and to the right of that is Parris Island Cos Romaine Lettuce.  At the bottom of the picture on the left is Simpson Elite (yellow-green), Buttercrunch (green), and Red Salad Bowl (green-red).  I’m amazed at how well these little guys are doing!  Only one month old.  I’m thinking of getting another floating row cover so I can put it over the lettuce/herb garden and get these put outside soon.

Now, onto the next batch.  These are three weeks old: 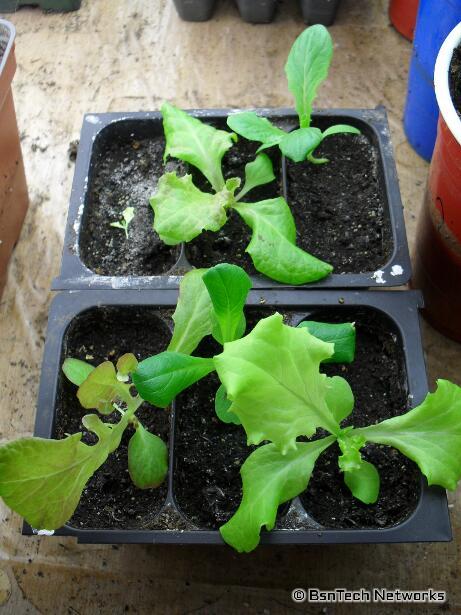 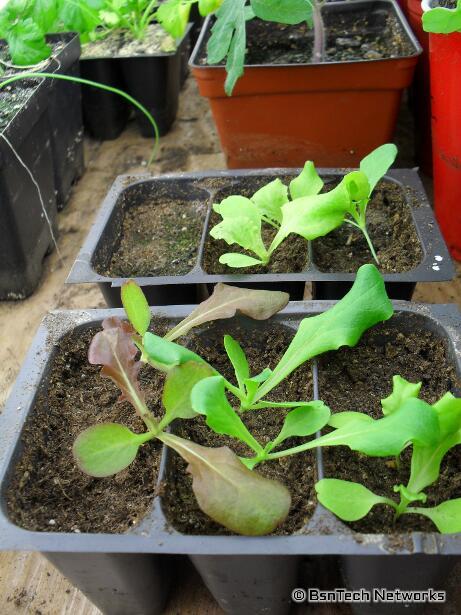 Nice to see how they stack up against one another.  What a difference one or two weeks makes eh?  I bottom-feed all of these with a compost tea mixture until they are saturated.  I definitely think that using compost tea as a fertilizer does wonders.

Moving right along.  The peppers have FINALLY began to sprout.  This is an Anaheim Hot Pepper that is now about a week old: 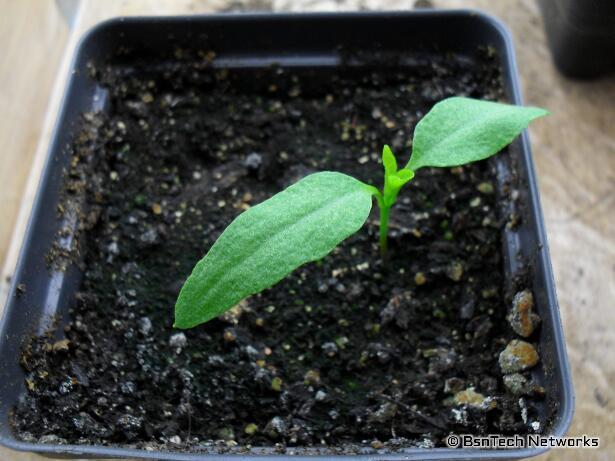 Here are a bunch of California Wonder peppers.  They just began sprouting mostly this week as well.  Originally I planted two per cell – but after about 20 days with zero sprouting, I planted another two per cell.  Funny how those have sprouted in a matter of 10 – 12 days – and the others took over 23 days at the earliest to sprout.  It all comes down to the soil temperature. 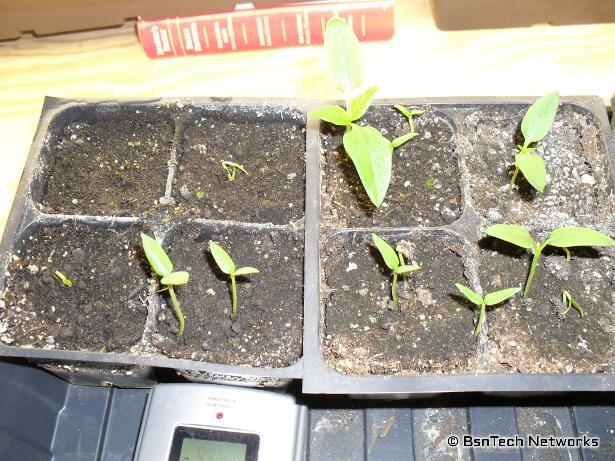 You can see at the bottom of that photo I have a temperature gauge.  It shows 95 degrees.  With keeping these in the heated greenhouse with a clear lid over it and the heating pad on 24/7, it finally got them to sprout.  Originally the heating pad was only on for about 12-13 hours per day – and I didn’t get anything to sprout.  Here is the Planters Pride heated greenhouse that I use.  As I said, it has a clear plastic lid to keep the moisture and heat in, a tray that the seed containers sit on, the heating pad is then under that, and then an overall plastic enclosure that encloses it all. 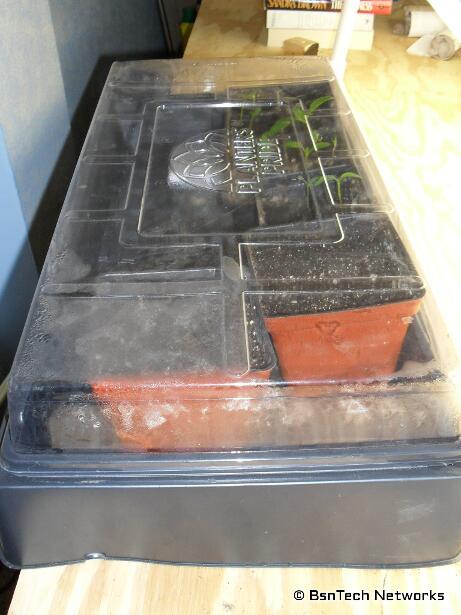 Alright – now, let’s compare the broccoli and cauliflower plants versus last week.  They have grown considerably – maybe even doubling in size! 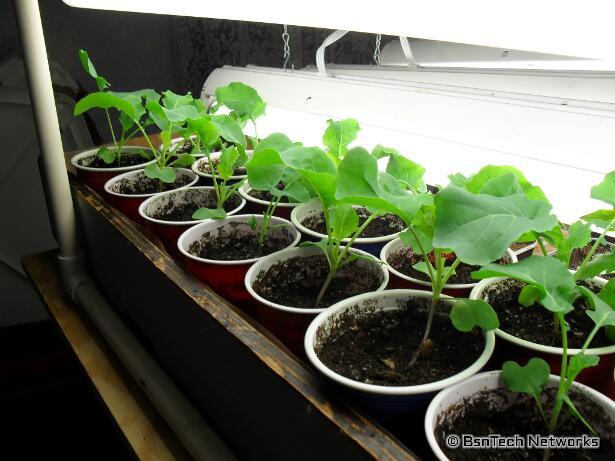 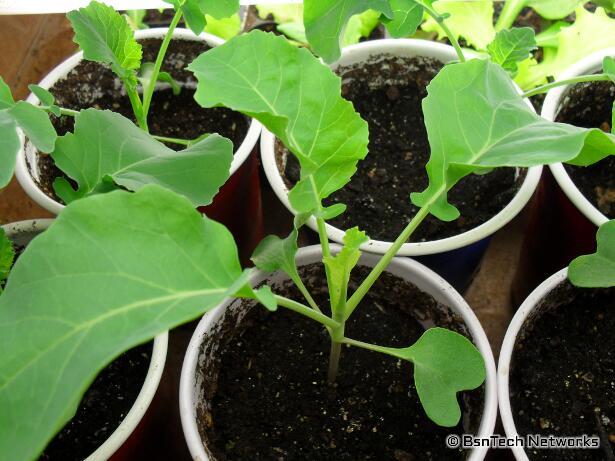 The tomatoes are doing well too.  Unfortunately, I may have squished one (a Best Boy variety) because the fluorescent lights were not lifted in time.  Can’t really see it here – but the stem has been bent a bit.  Hopefully it will straighten back out. 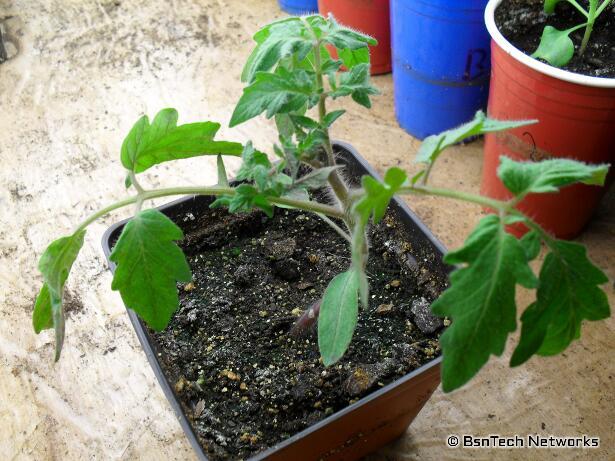 And a Roma tomato: 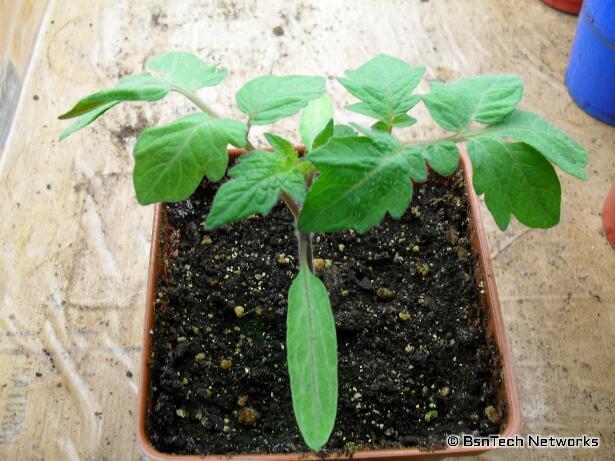 And a tray of some more tomatoes (Best Boy, Roma, and Red Cherry): 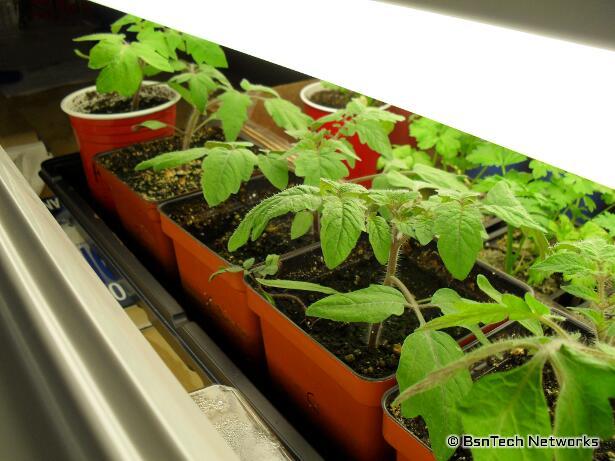 Now, because I’ve already set out most of the Copra Onion seedlings (well, as many as I could fit), I  had some left-overs.  They were transplanted into these containers and they continue to grow.  I guess I’ll be planting these down in the flower bed this year because I simply cannot let these go to waste. 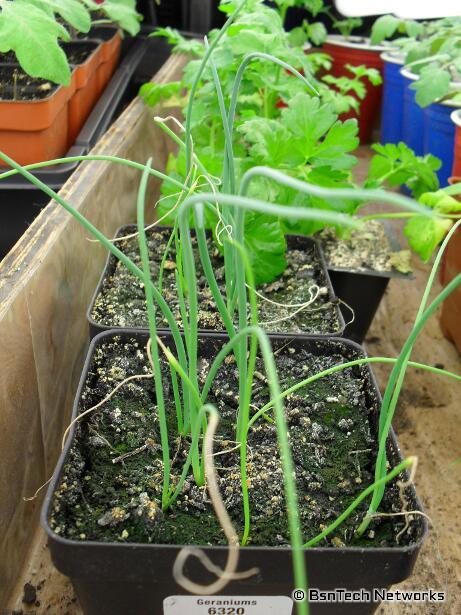 Nor can I let these Varsity Onions go to waste either.  A GardenWeb member was nice enough to send me his remaining packet of Varsity Onion seeds – so they were planted.  It definitely is not going to be level playing field when I compare these two – since I’ve already set Copra Onions outside and they were started about 14-15 days earlier. 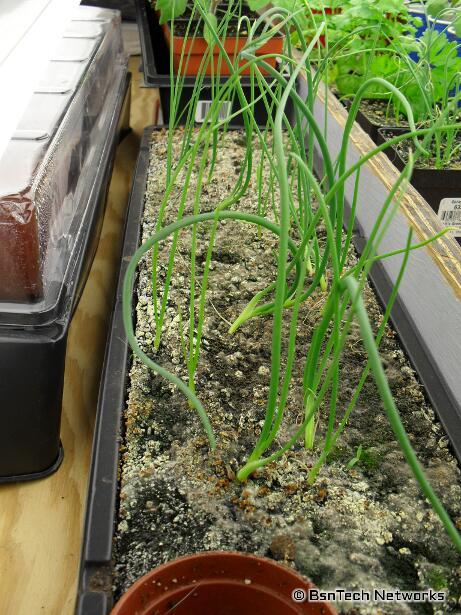 That is a lot of pictures isn’t it!  Well, we’re not done yet!  That covers all of the current plants in the germination station.  Now, let’s take a walk outdoors and… 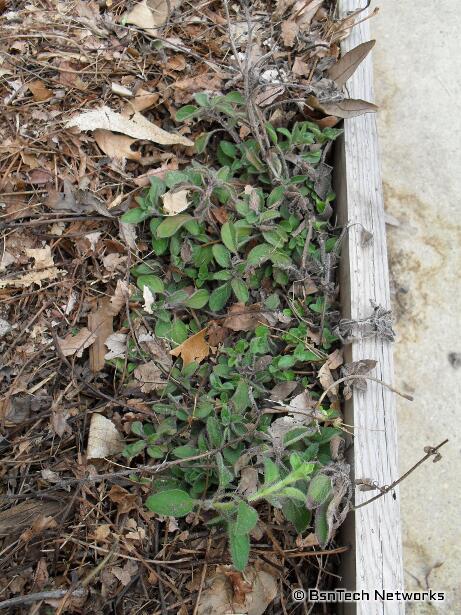 Oh my!  What is that?  It is oregano that I planted from seed last year!  Yes, oregano will not produce much of anything in the first year.  But, it over-wintered well and it is greening up and growing already.  Hopefully we’ll get some fresh oregano this year!

I’ve also had some Cascadia peas begin to germinate.  Yesterday I counted 18 and today I counted 28.  That still is a far cry from the 334 that were planted.  All 28 that have sprouted are right next to the house – so the soil is warmer because of the inside house temperature.  None of them behind the garage have sprouted yet.  This same thing happened the past two years as well. 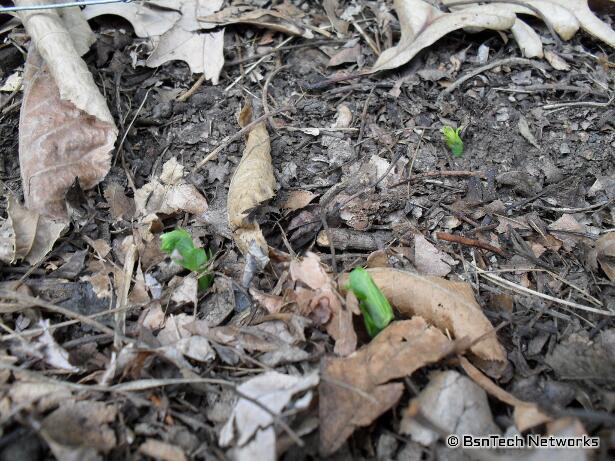 Are you bored yet?  Well, just three more pictures – and they are all from the front garden.

Unfortunately, the floating row cover proved to be too much for the onions.  So, I had to change how the cover was and made a house out of it over the celery.  Some celery stalks were also being broken off from the row cover as well – so I had to make some PVC supports to keep it off the celery. 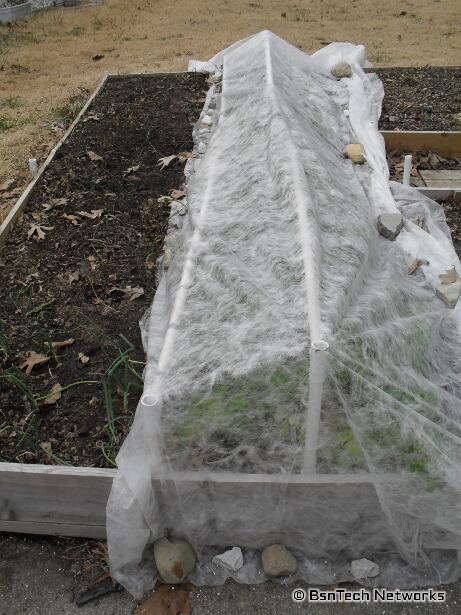 Here is a closer view of the onions that were started back around December 20th.  They are doing very well – and are much further along than all the other Copra onions that were planted outside.  These things are still quite small – and they are now about 3.5 months old! 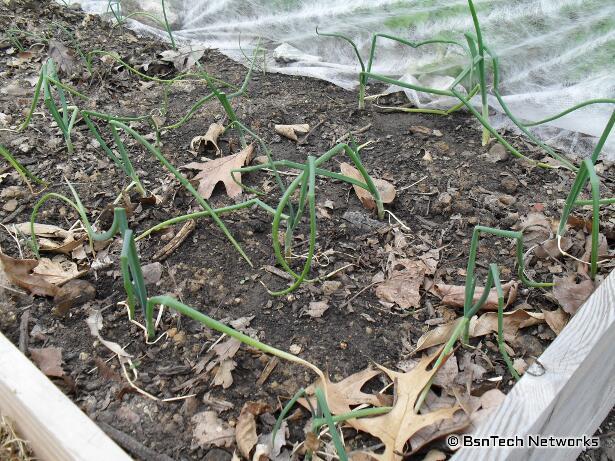 And alas – let’s take a peak under the floating row cover and see the bounty of Ventura celery!  I certainly hope this will be the year that the celery does well – because it was horrible last year. 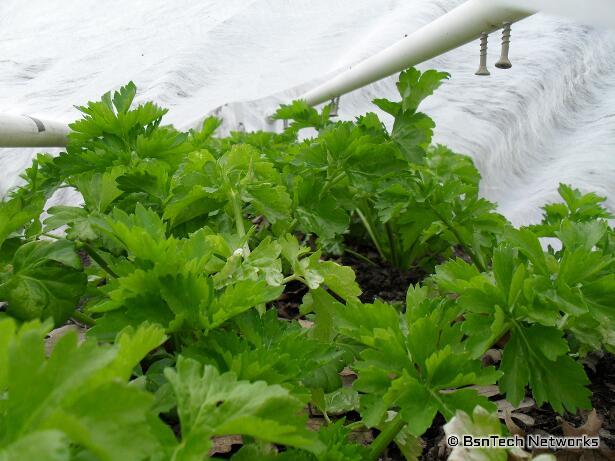 Welp, happy gardening to everyone and hope you continue to follow me!