This weekend was cleanup weekend.  Because of the forrest behind the house, the back yard was 100% covered with leaves.  The neighbor is very religious about blowing the leaves off of his yard everyday – and unfortunately he stops right at the property line in the back so there is a nice mound of leaves where he sorta just pushes them off his property for me to cleanup.  Oh well – that is fine because I spent at least six hours raking and mulching up all of the leaves in the yard yesterday.

Even after doing this, I still don't have enough leaves to cover the gardens!  I got the garden next to the house fully covered: 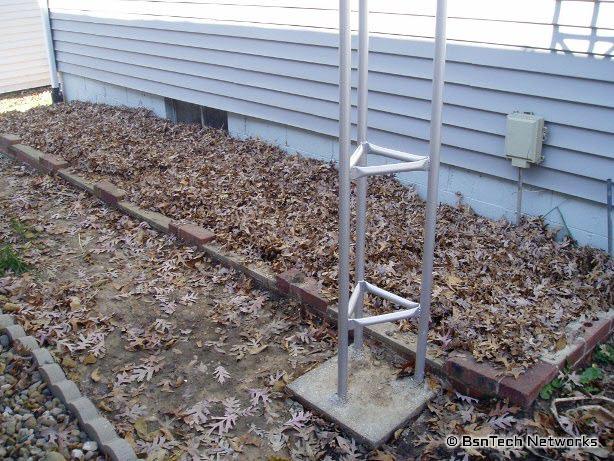 And I also got about 2/3 of the garden behind the garage filled in (not shown).  Before filling in the areas, I filled up two garbage containers full of leaves and this new addition: 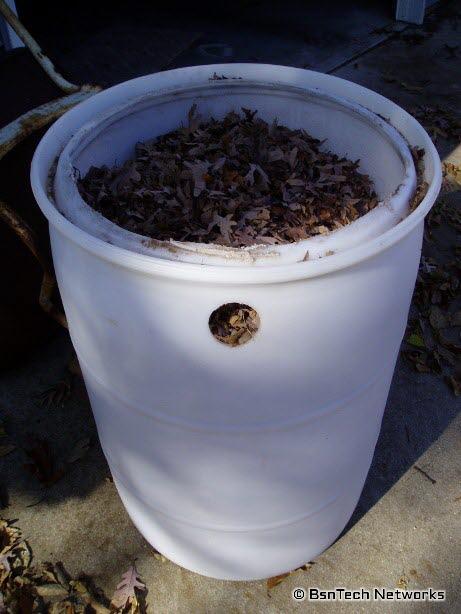 I purchased this 55 gallon drum at a local car wash.  They get the car soap in the big 55 gallon drums.  These are well known for their use in collecting rain water from your downspouts – which is what my plan was.  I got the drum and was quite excited so I went up to Menards and purchased some PVC pipe and fittings to get this going.  My neighbor purchased one of these at a Master Gardener seminar a few years back for $25.  After getting it home, I cut a hole in the top and a hole in the side (as shown above).  The hole in the side is for the overflow  – so when the container gets full, it would overflow the rest down into the drain where the water originally went in the yard.

Well, originally this 55 gallon drum had two bung holes in the top of the lid.  The bung holes have a female screw-in built right into the lid.  So, I bought 2" PVC for the overflow – with both a male and female connector to attach to the side of the barrel.  I took the male part of the 2" PVC pipe and it fit PERFECTLY into the female bung hole.  Well, unfortunately, I had already put a hole in the top.

A guy at work says his dad owns an oil changing shop in a town close by – and they have a lot of these 55 gallon drums that were filled with windshield wiper fluid.  So, I asked him to get me three of them.  I went back to Menards and bought a 2" PVC T-connector and a couple of 2" PVC 90-degree elbows.  I then drilled a hole through one of the 90-degree elbows and placed a 1/2" male-threaded piece into the hole and used some PVC cement and put on several coats of it to make sure the hole was completely filled.  The goal is to use each of the 2" bung holes in the new 55 gallon drums I'll receive and tie them all together.  The bung holes will be at the bottom and then I'll drill a small 1" hole at the top of each of the barrels to release the water pressure as the water comes into the barrels.  By tieing all of the barrels together with the 2" PVC pipe,  the water will come into one barrel and all three barrels will even out as the water comes in.  Then, by tieing all of them together with the 2" PVC pipe and placing the 1" pipe right into the elbow, this will increase the water pressure for the hose attached with the 1/2" piece coming out of the elbow.  Below is a picture to show the top part of the barrel (contains the two bung holes and this is the piece I cut off of the current barrel).  This shows how the 2" PVC fits snugly into the drum's bung hole and the elbow with 1/2" PVC pipe attached – which will then run to a garden hose and to the garden: 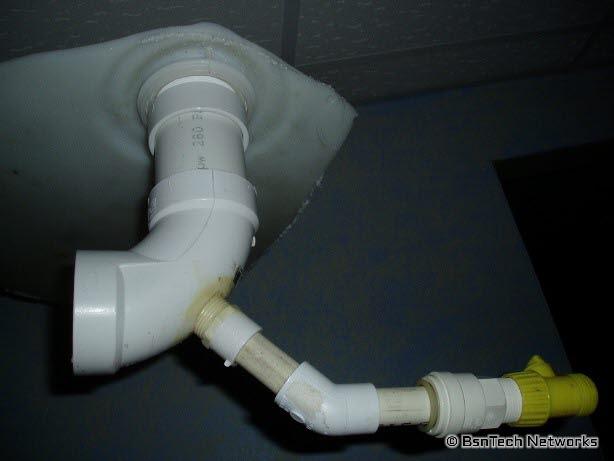 The yellow piece on the end is just a simple valve for closing the pipe or opening the pipe up.  It is connected to a 3/4" PVC to 3/4" male threaded garden host connector – which was the most expensive part of the setup ($5 for it!).

I should get the three barrles – hopefully tomorrow (Monday) and I will begin the actual setup of the whole system of three barrels used to hold rain water and to water the garden with next year.

Meanwhile, back to the garden.  I was digging up the strawberries in the back of the house to relocate them to the front garden bed.  The deer got in and did some damage to the strawberries that were transplanted last week so I also dug them up and relocated them to the part of the garden that is enclosed with deer netting: 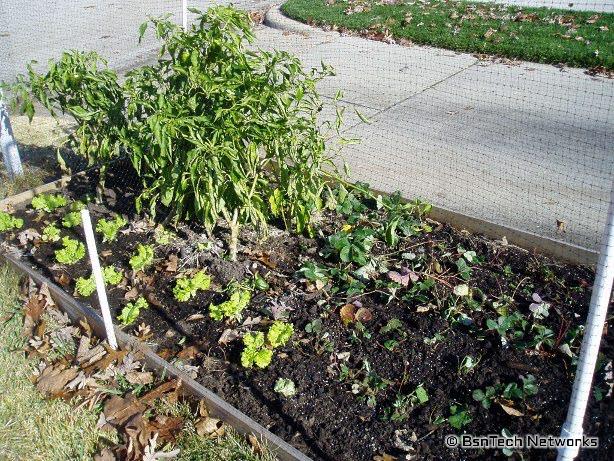 You can see the strawberries covering the right part of the garden – there are probably about 30 in there now after the deer really tore up the other ones that were not protected.

While digging up the strawberries in the back, I came across another potato!  This weight 1/2 an ounce less than a pound! 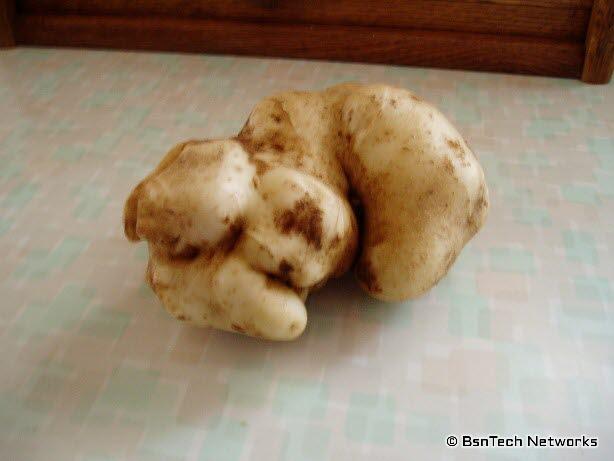 In addition to this potato, I took a look at the potato bin that was cleared out and was surpirsed to see that this little potato is trying to grow!  This is in the same exact spot as the only potato that lived to grow all the way to the top: 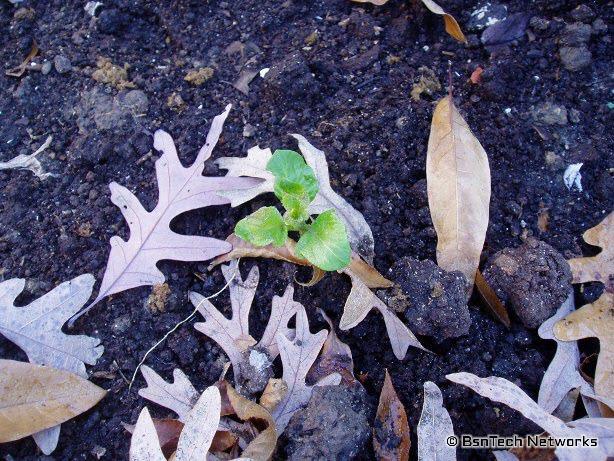 After digging up the potato and transplanting the strawberries, I opted to pick some more lettuce.  I got just a little above 3 ounces.  I then spread some fertilizer over the area where the lettuce is – thinking maybe the area isn't rich in nitrogen or some other nutrient is missing. 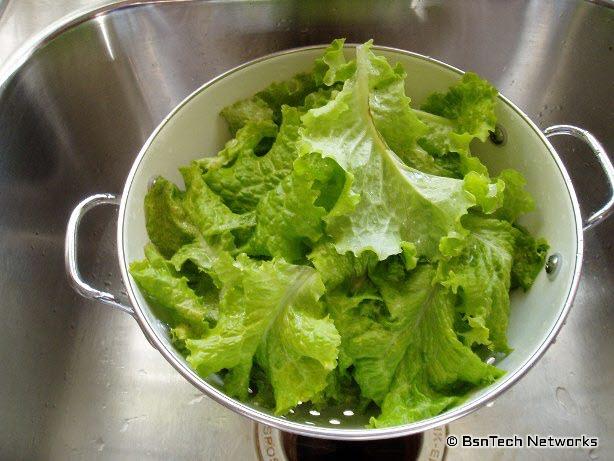 Pretty amazing that I'm still getting just a little bit of produce from the garden.  We had two nights where it frosted this week – and the lettuce still seems to be growing just as it was.  The pepper plants didn't do so well and many of the leaves withered down.

Lastly, a picture of the Flame Bunch grape vine.  Both the Flame Bunch and Concord grew very well this season.  The leaves are beginning to turn on them (even though almost all of the leaves from the other trees are gone). 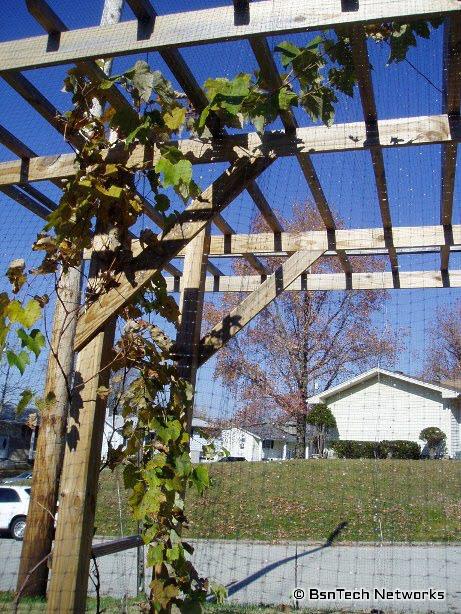 The two columnar apple trees (you can see one of them in the background – looks like a little stick out of the ground almost right in the middle of the picture on the bottom) didn't do well at all this season – and I don't think they grew at all.  This is all blamed on the deer that pulled all of the leaves off of them over and over as they set leaves.  I tried to put some deer netting over them to allow them to grow, but it just didn't work very well.  Really a shame since these were about $27 each at an online nursery.  But, I have been debating now whether to actually plant two dwarf apple trees in place of these.  Unfortunately, the dwarf apple trees would cost about $80 each because I would want a tree that would be a few years old so we would get fruit farily quickly.  But, I would have the same problem as I do with the columnar apples and the Granny Smith apple tree we already have – the deer.  I'm simply at a loss on how to get the deer to leave the trees alone.  At least the Granny Smith tree still has a few leaves on them – but the deer netting is smorthering the tree and is causing the branches to curl inwards a bit.