It has been a week since I got the germination station out.  Catchy name eh?

This morning, I got one of the fluorescent lights out and the PVC supports up to allow the lights to be overhead of the seedlings.  I’ve only hooked up one so far, but I suspect I’ll need to get the other one going soon.  Afterall, the onion container is twice the width as the container holding the celery. 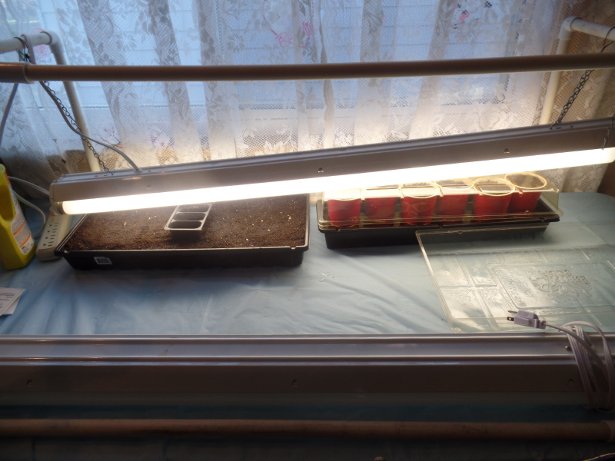 So far, no celery has germinated.  The Ventura Celery seed that I have.. is… probably four to five years old.  It still germinated last year so I am hoping it still does this year.  Overall, I have been very blessed with having seeds store for a long time.  I keep them all in their seed packets – then put them in a ziplock bag which is stored in the freezer.  I have some seeds that are fairly old and I still get some decent germination out of them.  But, even with wanting to get about six celery plants, I seed a total of 15 just to be safe.  If we don’t get six, it won’t be a big loss.  Honestly, we are lucky to even cut down one or two celery stalks before they go bad outside.  I am always looking for the best production out of the plants and unfortunately, that causes some of the vegetables to go bad before I even pick them.

Same is the case with the cauliflower and broccoli last year.  We had a few of them but by the time I cut them out, they already were flowered and bad.  Defeats the purpose!

OK, so anyways, we at least have some onions that have germinated in the past week!  The general temperature of the area is probably around 70 degrees, although it can get down to around 62 – 63 degrees at night.  No reason to keep the house terribly warm when we are all sleeping in bed anyways. 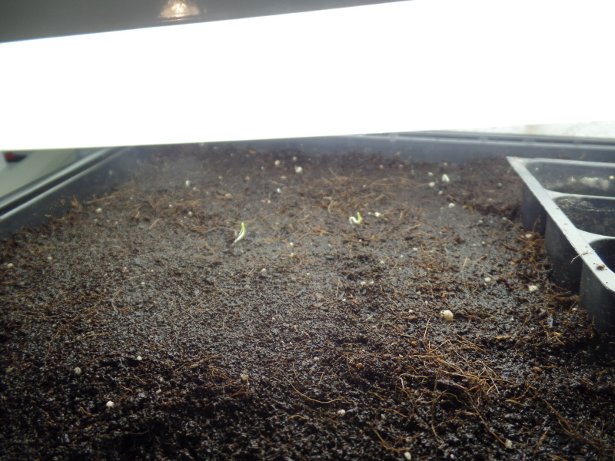 You can see the little black plastic container in the middle of the tray.  Why is that there?  Well, that is where I pour the water in.  If you recall, I do not water the trays from the top – causes damping off problems.  So instead, I use that little container to pour the water in – which then distributes the water at the bottom of the tray instead.

The onions… don’t look that great.  In the picture above, there are two.  One of them looks OK but the other looks like a small curled worm.  Usually when I see that, I’m not planning for the best.  With onion seeds, they typically shoot straight up with a little tip that eventually pulls away from the seed.  Then I know they are going to be good.  But if they start out curled up or not straight, they are most likely not going to make it.