This weekend we visited some family and then I spent Monday doing a little bit of gardening.  Mostly just giving everything a good drink since the temperatures have been in the 80’s and will be so this week.  At least there is a chance of rain tonight and tomorrow morning so really hoping we get some.  Don’t know how much I’ve depleted the rain barrels but I’ve used a lot of water lately since we’ve not had an abundance of rain.

We did have a short rainfall on Monday as I was watering everything – but was just enough to make it humid outside and wet the ground just a bit.

I also picked some Easter Egg radishes.  Amazing – last week they were not bulbing at all – and then poof!  They all of a sudden bulbed up in just a matter of a couple of days and needed picked. 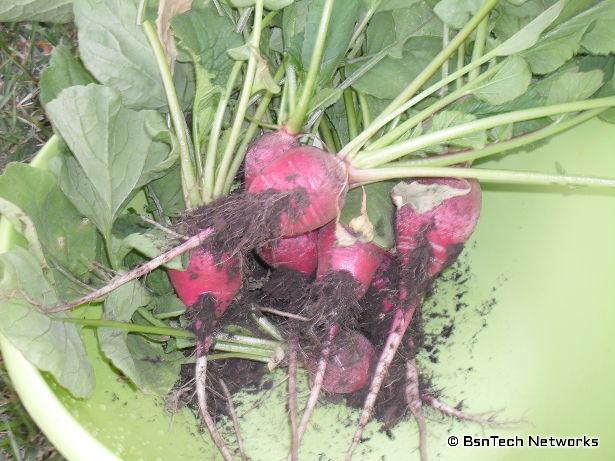 I planted more radishes in place of the ones that were taken out – plus put more in the second strawberry pyramid to fill it up. 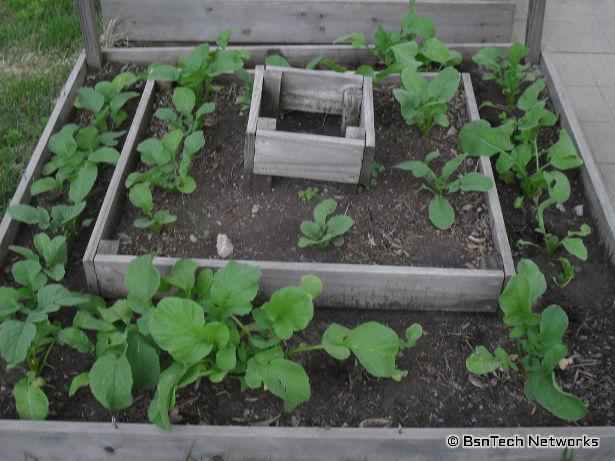 The Kennebec potatoes along the road are growing great as well.  They are starting to push against the deer netting and do very well.  The potatoes were planted closer together this year – about 8 to 10 inches apart instead of a foot.  Hopefully that won’t crowd them too much – but yield more in the potato area. 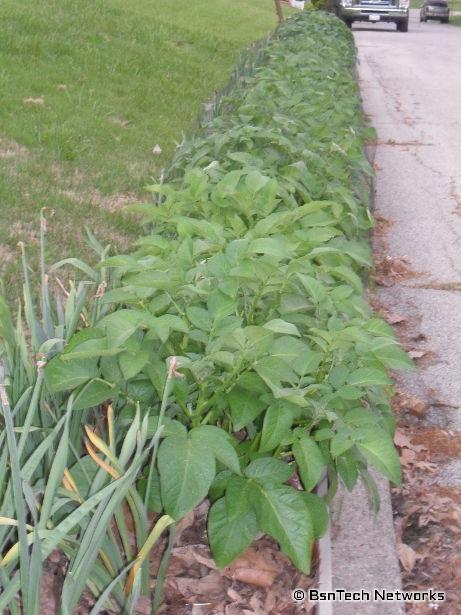 But the front garden by the road is filled with potatoes – and there is also a row in the back garden.  Last year, there were some “volunteer” potatoes that came up in both the back garden and side garden – although they were not harvested.  We had enough just from the garden by the road – and still ended up not using all of the potatoes.  So the left over potatoes were what was used this year as seed potatoes! 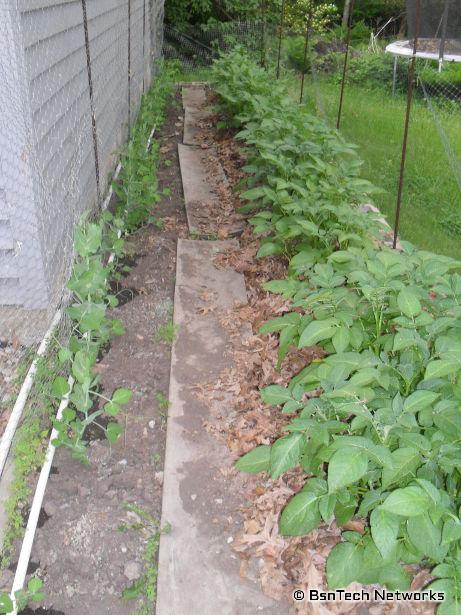 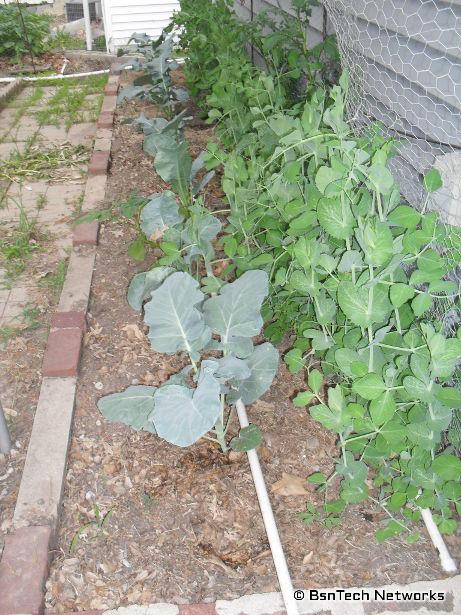 You can also see the row of broccoli and cauliflower in front of the peas.  They are doing well – although they are trying to reach for more sunlight with the way they are leaning a bit towards the south. 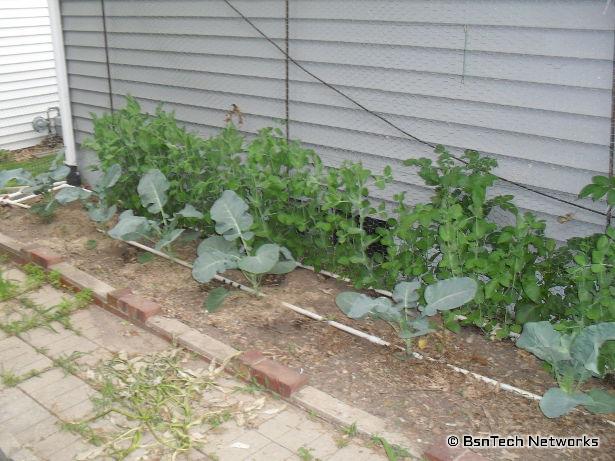 This week, I also planted some Straight Eight cucumbers and some eggplant.  I put two seeds each in some cups – used three cups for cucumbers and three cups for eggplant.  As of today, NONE of them have sprouted yet, so I am wondering if there is a problem with the seed or why they haven’t germinated.  With it being in the mid-80’s, it is more than warm enough. 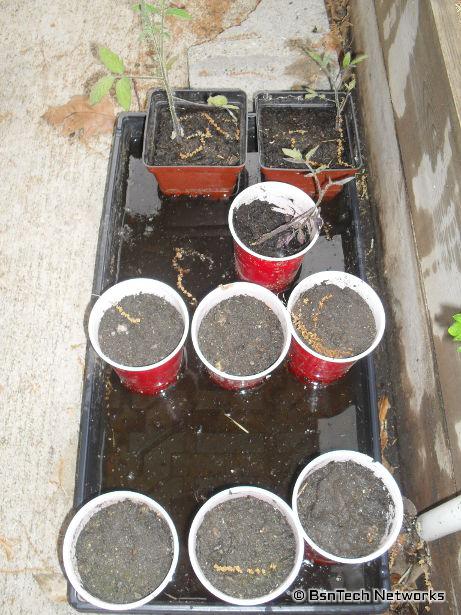 The lettuce in the old carrot bed is dong well – along with the onions.  The lettuce has grown so much already that it is starting to crowd out the onions.  Unfortunately, I have lost a Simpson Elite lettuce plant somehow.  It is near the front of the bed (can’t see it here) but it wilted up and is now a goner.  We still have plenty of lettuce though – and it needs picked! 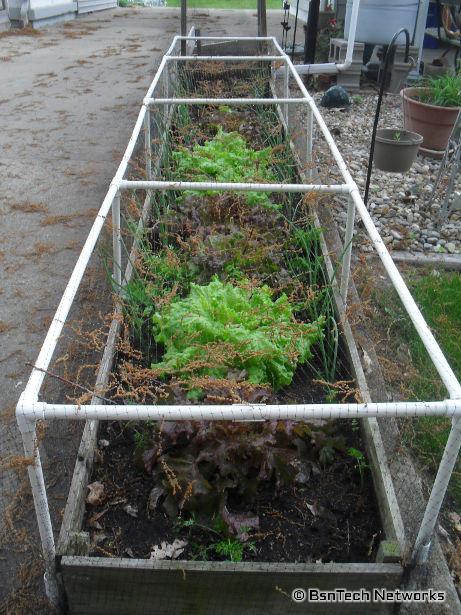 It is also that time of year where the trees start putting out there pollen and junk.  Not sure what kind of tree it is, but there are brown stringy pollen ‘droppings’ everywhere.  Easily seen on the picture above of the lettuce and on the driveway.

The patio garden also shows that the Ventura celery is growing well – and so are the onions.  There wre a couple places where two onions were planted right next to each other – so those were thinned out and three green onions were pulled for a tasty treat. 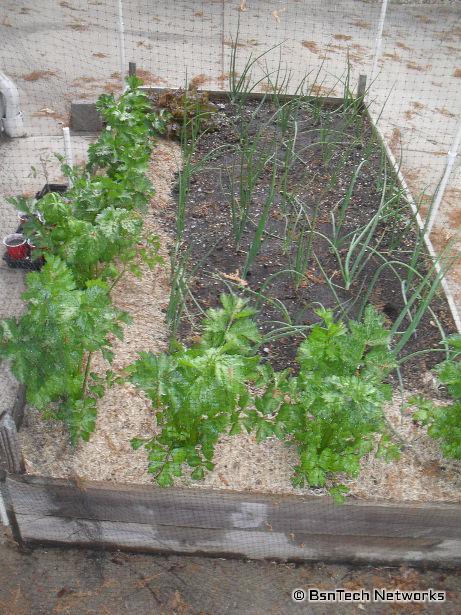 Well, what is left?  Just the front garden.  But before that, our pink peonies in the front have opened up with full blooms.  There still are several more that haven’t opened up yet.  Just amazing how large these flowers are.  Shame that they only last about a week or so. 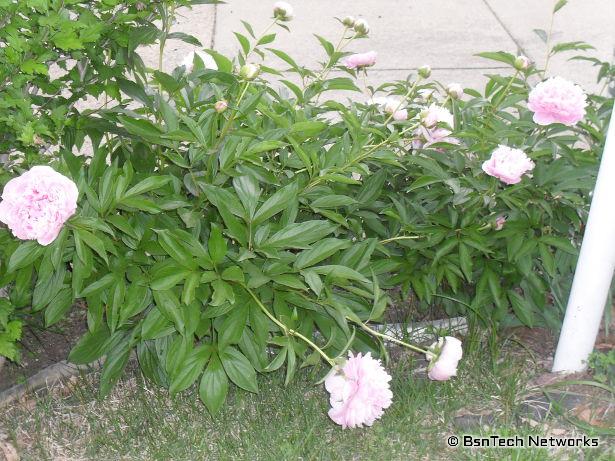 And finally for the front garden.  Below is the row of broccoli and a few cauliflower – with Bush Blue Lake 274 green beans flanking either side.  There are also some California Wonder peppers planted in this row – although they are up in the front of this bed and cannot be seen below. 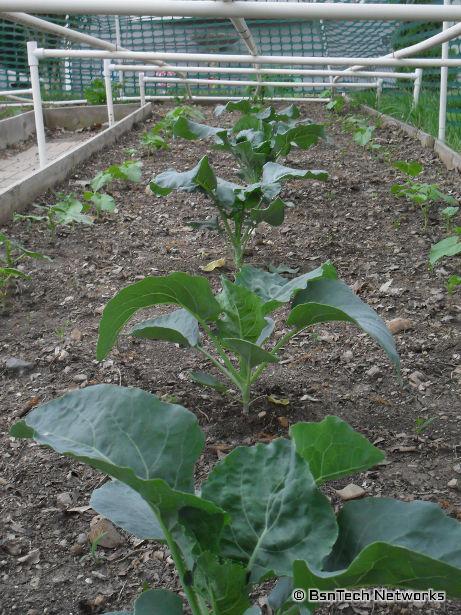 And for the tomatoes.  A mix of Roma tomatoes, one Red Cherry tomato, and Best Boy tomato.  After having the Best Boy packet of seed for about three or four years, I finally used all of the seed this year and had to pick up another $1.50 packet of seed for next year.  Still have plenty of Roma and Red Cherry tomato seed that is 6+ years old.  The seed packets back then really had a lot of seed.  Now, you are lucky to get maybe 30 seeds in a tomato packet.

Just like the picture above, the one below also shows that there are green beans flanking both sides of the tomatoes.  They are doing very well and I was surprised at the great germination rate of the green beans this year.  I’ve always seemed to struggle with this – but out of approximately 160 seeds, only about 25 – 30 needed to be re-seeded. 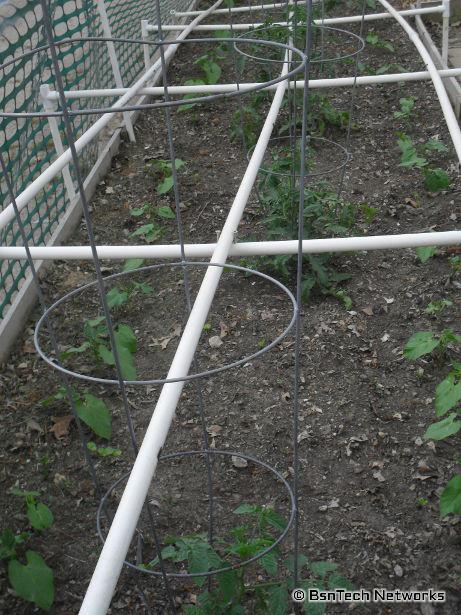