According to the University of Illinois website, our average last frost date for Central Illinois is between April 14th and April 21st.  To play it safe, I plan all of my plantings based on the April 21st date.

That means just a few days ago, there are 13 weeks until the last frost date!  I’ve been actively getting celery and onions seeded.  Yesterday I seeded another 12 Ventura celery seeds in three-packs.  I got a smaller half-width growing container while at the store yesterday – so it is only about six inches wide instead of a foot wide.  This is all that is needed to have four 3-packs in – and it still is longer than needed – but I only have so much space under the ‘germination station’ – which is why I needed to get this half-width growing container with a clear plastic cover to keep in moisture.

The Ventura celery seed was soaked in water for about 36 hours before putting in the three-packs.  I then fill the tray with water and the soil in the three-packs will pull the water in – that way I don’t have to water from the top and keeps the disease/damping off possibility down.

About 9 days ago, I planted 200 Copra Onion seeds.  I didn’t think I had this many left over from last year – but I did!  I still have maybe 20 seeds left.  I put in an order for FedCo Seeds just for more Copra Onion seeds since the Varsity Onion seeds were sold out.  It doesn’t look like I needed to purchase these – but that means I’ll have a supply for next year.  That means I won’t need to purchase seed next year!

Well, in nine days, over 50% of them have sprouted so far.  The growing area ranges between 59 degrees at night – up to about 73 degrees during the day with the fluorescent lights on.  The count of seedlings – as of yesterday around 5 pm – was right at 110. 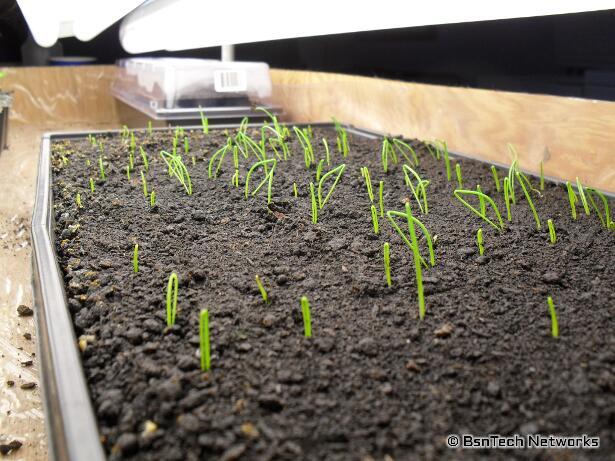 In the right-corner of this tray (not pictured), I have a small cup with holes in the bottom submerged in the soil.  This allows me to pour in water to this area and it will soak into the bottom of the container – keeping me from watering the top.

Here are some Copra onions that are now 40 days old.  They are still growing strong! 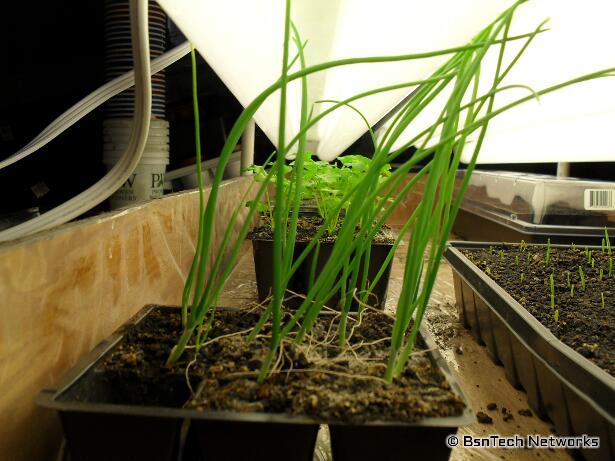 Behind the onions are the Ventura celery plants that are between 15 and 40 days old as well.  The celery are now all in 3-packs to give them more room for growing; I just hope I don’t need to transplant them again – because my ‘germination station’ is almost full already – and I haven’t even started the lettuce, peppers, tomatoes, broccoli, and cauliflower!  I may have to build another section if this keeps up. 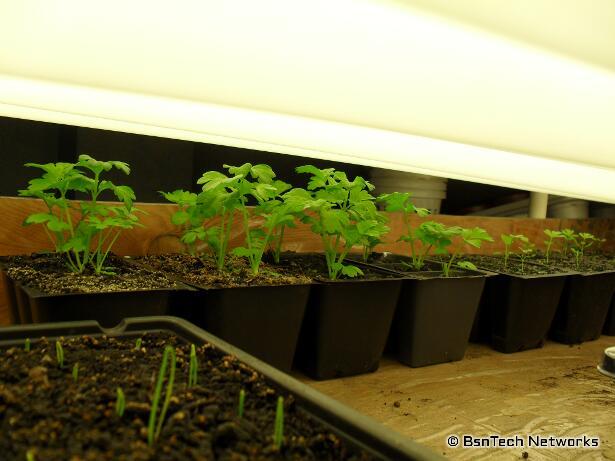 Above shows the Ventura celery.  The first four containers from the left have the celery that is around 40 days old.  On the far right are the newer celery plants that are about 15 days old.

Pulling away from the garden for a moment – and here is some wine updates.

The wine on the left is wine that has now been fully stabilized.  It is “bulk aging”.  Notice the color difference between the two carboys of wine.  The wine that is now stabilized and done fermenting is much darker.  The one on the right is still in the fermentation process and is only two weeks old at this point. 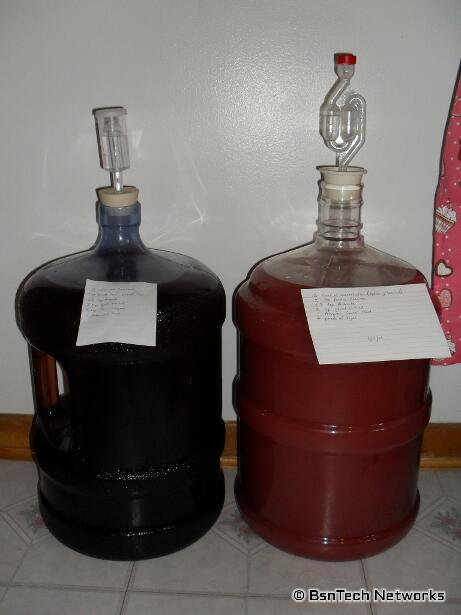