On Monday, I uncovered the one cauliflower that was doing well.  Well, it weighed in just 1/4 ounce under a pound!  Not too bad.  Unfortunately, it will most likely be the only one of the eight that produced much of anything.  I checked a few others and they have the small button or golf-ball sized curds.  I guess they must have got stressed out during a transplant or something else caused a problem.  So, I am going to pull those out of the garden this weekend and make room for bush green beans if they don't improve.  Anyways, here is that almost one-pound cauliflower curd!

Today I picked another two heads of broccoli and a whole bunch of peas!  I was picking peas off the 100 plants for over an hour and a half this evening!  Both of the broccoli weighed in at 1 pound, 7 3/4 ounces and I was very surprised with the peas.  I didn't think we would get even five pounds of peas with the beginning weigh in of not even a pound.  Four pickings later, there was 1 pound, 12 1/2 ounces of peas.  The peas are still growing but they are way over the top of the chicken wire fencing – so as long as they don't fall over on their own weight, I should get a few more pickings and maybe get seven or eight pounds of peas total. 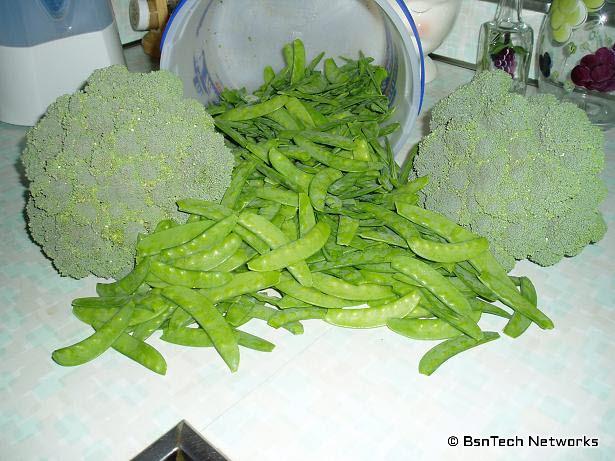