Wow, major success with the new batch of onions that were planted a few weeks back. 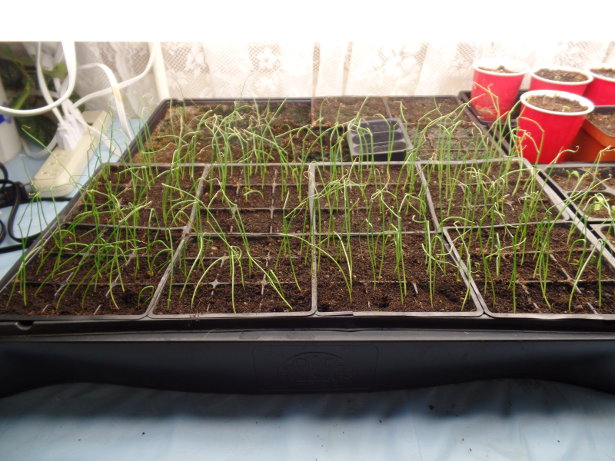 Now, I did run a heating pad under the onions for a few hours on a couple of days – the same day they were planted and the day after.  But then I started reading that the optimal germination temperature for onions was around 68 degrees.  Since our house is kept at 69 degrees, I shut off the heating pad after that and didn’t use it.  I can’t think that having the heating pad on for a couple of hours on those two days would have made a difference, but I just don’t know what else may have caused it.  To have great germination rates out of the new tray versus those that I planted in the older tray in the same black nine-pack containers and at the same depth… something must be different.

Celery… there will be no celery this year.  The two seedlings didn’t make it.  So, will try again next year.

Germination on the various tomatoes and lettuce have done very well. 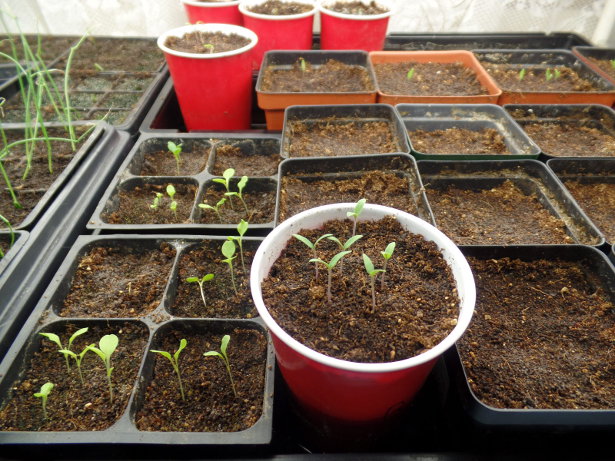 I was astounded… again… at how well the germination rates were for the tomatoes and lettuce.  As you can see above, four of the eight lettuce squares had either three or four seeds germinate… out of the four planted.  Then there are two that had two seedlings.  And two squares didn’t have any.  I didn’t label what I planted in each square, so it will just be a matter of seeing what they are.  A few of them already have some purple colors on them – so those either are the New Red Fire or the Red Salad Bowl varieties.

With the tomatoes, right front and center is the Red Cherry Tomato seedlings.  Total of six germinated out of about eight that I seeded.  This seed is quite old – some of the original seed that I bought even before moving into the house we’ve lived in for eight years!  That was back when you got a lot of seeds in a package for your money.  Now, it seems you are lucky to maybe get 25 seeds in a packet. 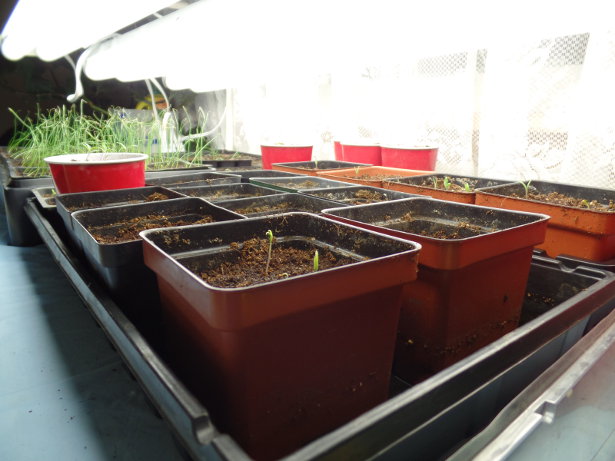 Above is another view of the trays.  You can see more tomato plants shooting up there in the front and over to the back / right side.  The Best Boy Tomatoes – I believe new seed was purchased either last year or the year before.  Germination rates on those were also very good – two or three out of three seeds came up in each.  This is a hybrid tomato and very good, so I grow it every year.  But with having so many come up, I don’t just like to pluck out extras that come up.  Will see if I can save them and maybe put them in other squares.  Now, to see if I have room in the garden to plant them! 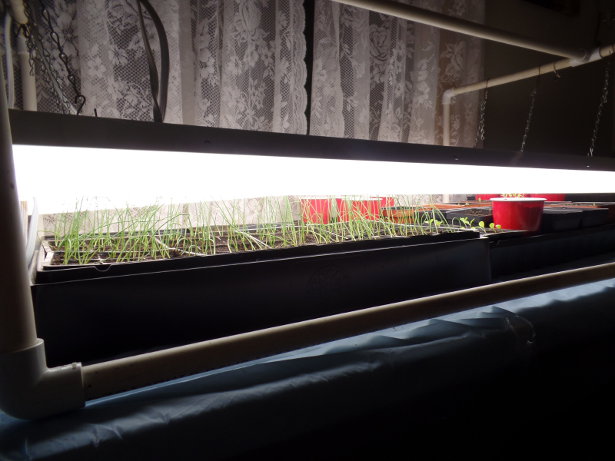 Welp, the Germination Station is pretty well full, but when I take the celery out in the very back right, that will give me room for at least four large squares to transplant some of the tomato seedlings.  And, I may take out the entire tray of onions in the back that just are not turning out very well.