A few things going on this week in the garden.  After picking that load of carrots, there were other veggies that needed attention.

Thursday we took off at 6 am to go to the in-laws house to check on the corn.  We also had about 150 new corn seedlings that needed planting as they had been in the small growers for over two weeks – not very good for them at all.  Some of them were beginning to yellow because they were quite rootbound.  We left at 6 am because we wanted to also go to Six Flags in St. Louis (pictures in the Picture Gallery) and I knew it would take quite a while to plant 150 new corn seedlings.

Well, when we got there, I was quite depressed and had some sour disappointment.  The entire area was filled with weeds – you couldn't even see the soil there were so many weeds.  In addition to that, all of the corn was getting to the point where it was done because the silks were turning brown.  Unfortunately, the corn was less than five feet tall and there were very little ears on them.  This was pretty much a bust.  If you remember, only about 22 of the almost 200 seeds we planted down there sprouted – but all of the 42 transplants (seen below) all came up – but were very stunted.  It must be due to the lack of nutrients in the soil. 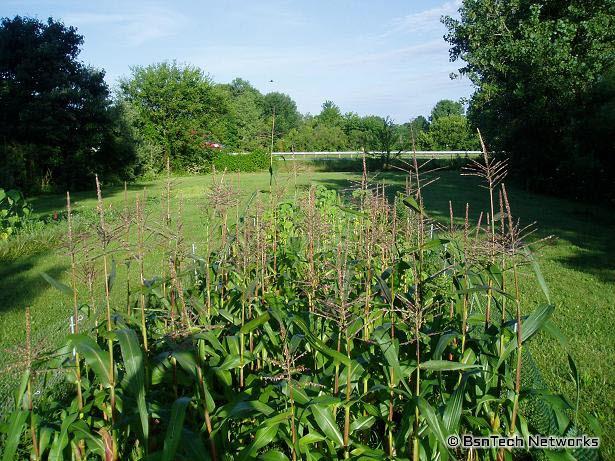 So, we packed up all of the corn seedlings and put them back in the trunk.  I had no idea where we were going to plant them – but it sure was a waste that they all the seedlings grew and now they were going to be thrown out (63 out of 65 Peaches & Cream sprouted and 89 of the 96 Sugar Dots sprouted).

At the theme park, I didn't want the seedlings to sit in the car, so I put them out on the trunk of the car.  If they were left in the car, they would have burned up.  At least the visitors were all nice and no one did anything to the plants on the trunk during our stay.

On Friday after work, it was time to figure out where to plant the corn.  Well, none of the green beans in the area we had the carrots came up.  So I opted to put some in there.  Although they were planted a bit too close, I wanted to try to get as many in as I could – and I knew this soil had plenty of nutrients in them.  The container is two-feet wide, and I planted three rows of them.  So, we put in in a 13 x 3 planting of Sugar Dots (39 total): 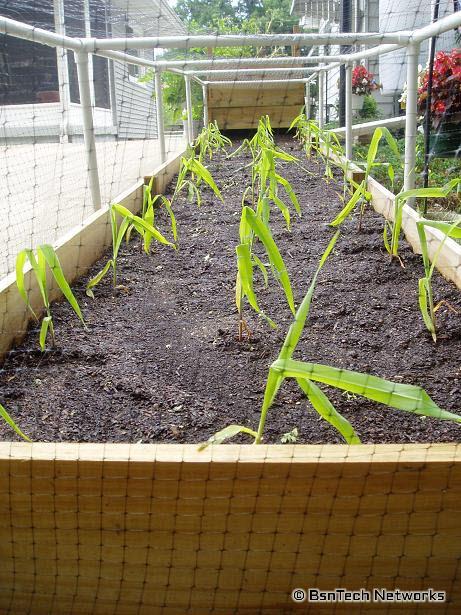 As you can see, the bird netting is still over the top of the container.  When the corn grows to be taller, I'll have to replace this and put up the full height of the bird net fencing all the way around the box to keep the deer out.  We have a big problem with the deer eating everything around here – just ask our naked columnar apple tree out front that has had all its leaves bit off twice!

After planting these, the other spot to plant them in was next to the house – where the peas and onions were.  I had just planted more green beans in this area about a week prior – and again, only about 16 of those 40 green beans came up – again – very disappointing.  So I moved all of the green beans closer to gether.  My wife pulled up all of the onions – and to my surprise, they must have been ready because the roots just fell off of them when they were pulled out.  In all, there was just over 11 pounds of onions.  We had about 36 white onions and 26 yellow onions.  It is pretty interesting though that the white onions only weighed an ounce more than the yellow ones – even though there were 10 more white onions over the yellow onions!  I guess next year I'll know to only plant the yellow onions. 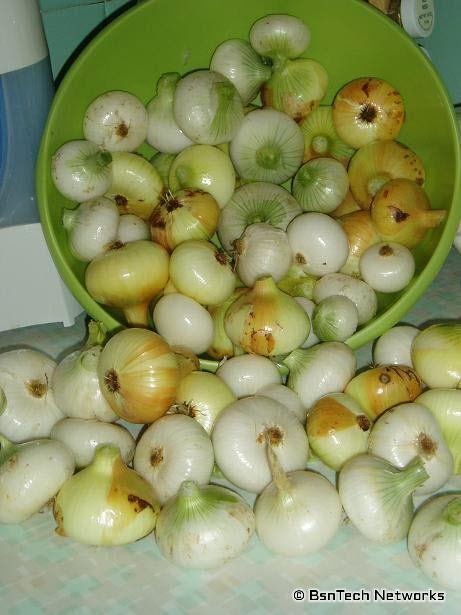 So, in the area next to the house, we were able to plant three rows of Peaches & Cream corn in rows of 16 – so that was another 48 corn seedlings used (up to 87 now out of the 152 seedlings).

Lastly, I then planted some corn down the middle and in areas where green beans didn't come up in the front garden.  I was able to fit another 24 there (that makes 111 seedlings now!)

Well, today I went to the local garden store and purchased some more PVC materials.  Now that there were three rows in the side garden, I had to change the PVC piping a little bit – from two rows to three.  So, I got all of that done: 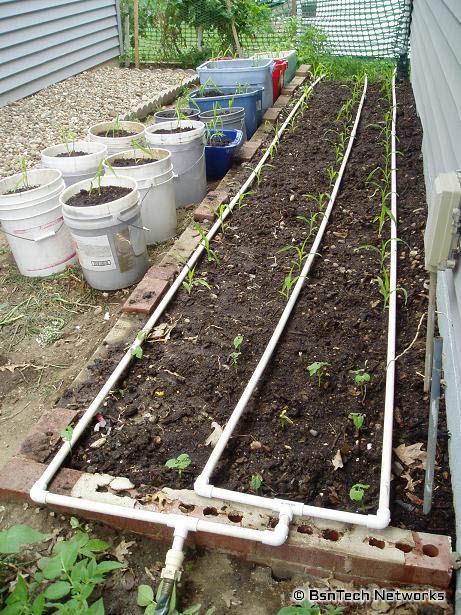 Hmmm – what are all those buckets in the pictures?  Welp, on the way back home from the garden center, I had a light bulb lit up in the brain and I thought – last year I put the corn between the two landscaping areas between the garage and house (landscaping area next to the garage and last year the garden was also landscaping).  So, why not fill up some containers and put the corn in there!  So I went to another compost facility today that is just right next to the other one.  They don't have a gate like the other place does to keep people out – and there was a worker there.  The worker led me to a pile of compost that had already been screened!  Just perfect!  So next year I'll know where to get the compost from.

It took me two trips to fill up all of the containers.  I was then able to finish the last 15 of the Peaches & Cream corn (126 seedlings now).  Then I had enough to put 20 more Sugar Dots in the containers (146 seedlings!).  Wow, so out of the 152 corn that was planted, only six of them didn't have a home.  That is pretty good – and if all 146 of those come up, we'll have plenty of corn!  The Sugar Dots corn also will put on two ears if conditions are right – so I'm hoping that they will put on two ears with the better soil – although they were root bound in those little growers for two weeks.

OK, all done with the corn and PVC updates.  Here are a few more pictures from the garden.

The first photo is one of the Better Boy tomatoes.  Although the plant seems to have put on quite a few large tomatoes, something seems to also be killing the tomato plant.  As you can see below, almost all of the leaves on the plant are all dead and dying – except for the very top: 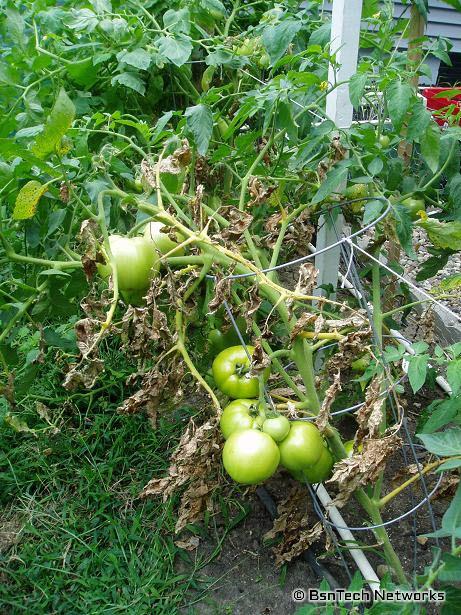 The cherry tomato plants are putting on some small ones.  I've eaten a few right off the vine and they are good!  But, these tomato plants also have a problem of their own – they were very long and stalky: 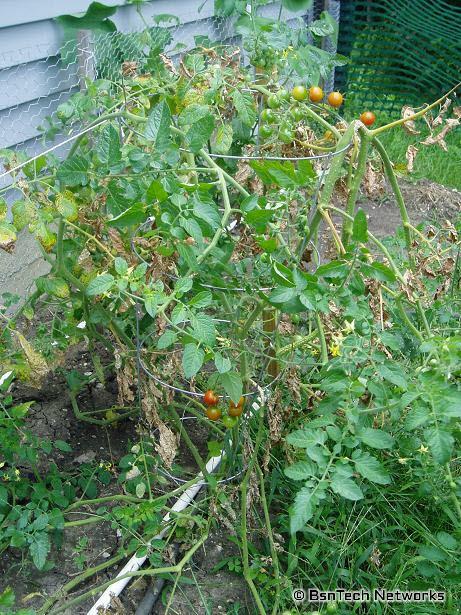 And lastly, the cucumber plants.  These plants have some HUGE leaves on them and at least a dozen flowers on each of them.  None have begun to produce a single cucumber yet – so I'm still crossing my fingers that we'll have some. 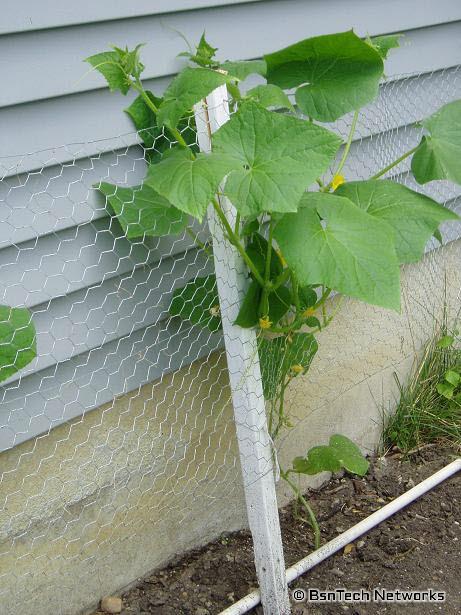